Fill Your Phone with Cats: “Nekoatsume”

Mobile gaming is one of the few bright spots in Japan’s IT sphere. One of the bigger―and certainly the most adorable―hits to appear this year is Nekoatsume. The title, which can be loosely translated as “gathering cats,” sums up the entire game. Players place various items around a virtual garden to entice a cast of adorable feline callers and then check into the app periodically to watch them go about their furry antics.

An App for Cat Lovers 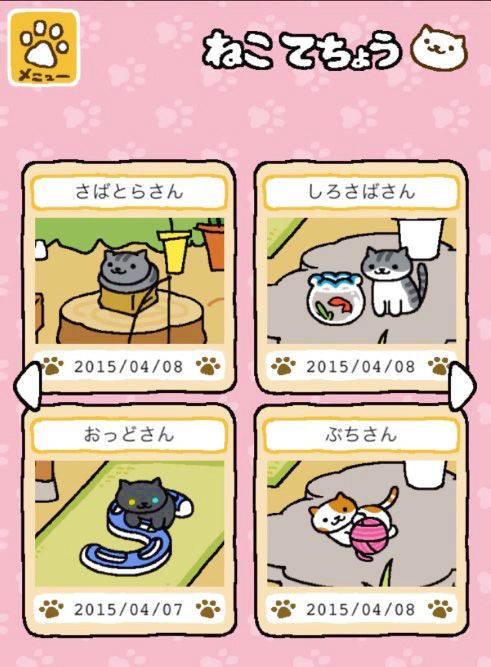 The app’s shop features a wide variety of feline-friendly snacks and items to play with. Shoppers can save up their fish over time or spend real-world money for an instant deposit in their account.

The game is the creation of Takasaki Yutaka, a programmer at Kyoto-based software company Hit-point. Takasaki worked on the game as a way to fill down time between projects. Gameplay is slow and simple. The player purchases cat food, toys, and other items using in-app currency in the form of silver and gold niboshi, or small dried anchovies―a favorite snack of Japanese cats. Once these items are positioned around the player’s yard, the only thing left to do is wait.

Nekoatsume runs in real time and it takes a while for players to be rewarded for their efforts. But once the kittens begin to show their faces, it’s nothing but cat heaven. An orange tabby might be lured to play with a squishy ball or a scratching post might tempt a black and white Siamese to pay a visit. Interaction is almost exclusively visual, with the capers of the endearingly drawn characters providing a welcome respite from the drudgery of work, a gentle pick-me-up between chores, or an injection of kawaii wherever and whenever it’s needed.

Just as in real life, cats will show their appreciation by leaving presents collected during their cyber wanderings, such as a pink belt or a used hand warmer. They also bring niboshi, which can be collected and used to buy additional pieces for the garden. 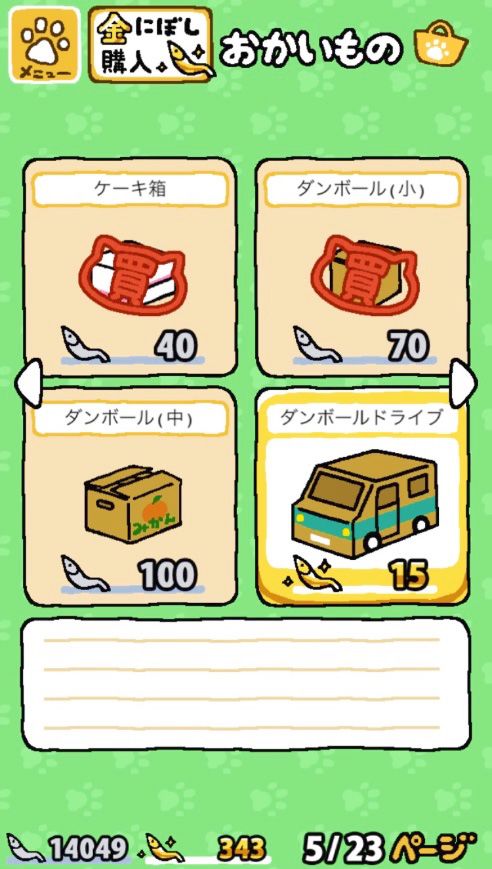 The dates when the animals first visit are logged in the player’s cat handbook.

Nekoatsume was released without any fanfare―almost as if no one wanted to startle the cats―but was quickly catapulted to success when Twitter users began sharing pictures of their kitty visitors. In an interview in the Japanese online magazine Weekly Ascii Plus, Takasaki explained that expectations for the game were low, with the download target originally set at around 50,000 annually. However, the game has proved irresistible to cat lovers, who have already downloaded the application more than 2 million times since its autumn 2014 launch. A recently started Twitter account for the game has garnered over 100,000 followers with just a handful of tweets.

Adding to the slow-paced, relaxing appeal of the game are the charming illustrations by designer Morita Ippei. The artwork is simple, but little details imbue each feline character with its own individual appeal. Takasaki says that the cats are neither strays nor house cats. The developer describes the world of Nekoatsume as being more akin to a manga than a game. 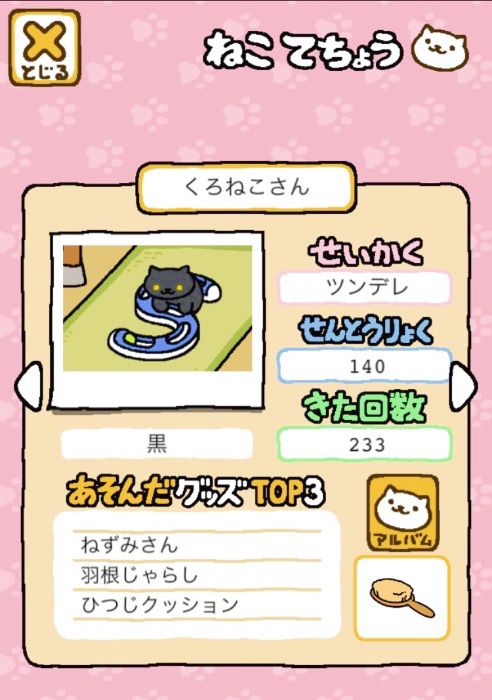 Kitty profiles provide information on each visitor. “Kuroneko” here is described as tsundere, aloof at first but affectionate later on, boasts a “battle skill level” of 140, and has visited the garden 233 times. At the bottom of the character pane is a list of Kuroneko’s favorite items.

Despite the application’s breakout success, Hit-point has no plans to actively market it or seek to turn it into a money-spinner. (The game does allow in-game purchases of golden niboshi for users anxious to upgrade to the top-shelf cat toys right away.) Development continues, though: a recent update has added items and provided players with additional choices of garden layouts. Much like a player dealing with a group of capricious cats, it seems that Takasaki and his employer intend to wait patiently and watch where users want to go.

Nekoatsume is available for iOS and Android. Gameplay is in Japanese, but the simplicity of the app makes it accessible to any user with an affinity for cats.