A spate of recent reports in the Western press (including a video documentary) have noted the independence of Japan’s youngest commuters—elementary-school students and even younger children. This independence is held up in contrast with the lack of similar freedom in many other nations, particularly the United States, which has been singled out as particularly unfriendly to the “free-range child.”

Indeed, there is nothing unusual in Japan about elementary schoolers traveling to and from school along busy roads, on crowded buses, or aboard rush-hour trains. Compared to other industrialized nations, where commuting distances and safety concerns make it more likely for children to be ferried to class by car or school bus, young Japanese students regularly make their own way, relying on public transportation or their own two feet.

In reality, though, elementary school students in Japan, particularly in urban areas, are kept under close watch. They may indeed be undergoing their first training in independent action earlier than their counterparts in other countries, but they are not doing so in an unsupervised environment.

While most Japanese students travel back and forth to elementary school unaccompanied by a parent or guardian, this does not mean they are left to their own devices. Instead, school policies, organizations including parent-teacher associations and local law enforcement, public education campaigns, and neighborhood volunteers combine to envelop students in an intricate safety web. 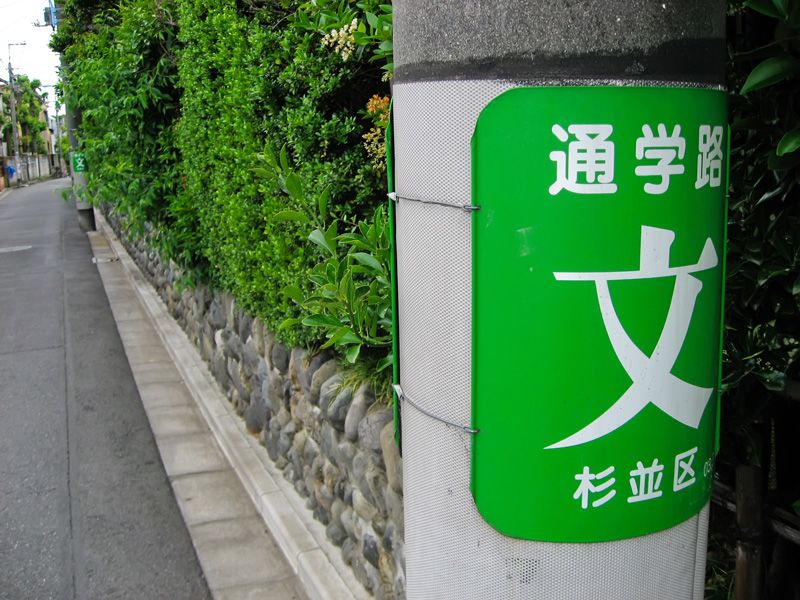 A utility pole displays a marker designating the road a school route.

Parents or guardians are normally required to choose a route and draw a detailed map of the tsūgakuro their child will follow, filing this with the school prior to the start of classes. Students are also organized into neighborhood han, or groups, with many schools adopting shūdan tōgekō, a practice where students travel to and from school in these groups. PTAs, especially at public schools, commonly set rotating schedules for parents to serve as crossing guards, and local volunteers are enlisted to stand watch along routes—often elderly members of the community who wear vests distinguishing their role.

Private schools accept students from much farther-flung areas than public schools with well-defined districts, so many students rely on public transportation to get to class. Like their peers walking on the roads, however, students riding to school must adhere to predetermined routes. Schools generally designate the stations and bus stops that can be used, sometimes even running special shuttles between these stops and the school, and stipulate riding times. These steps allow administrators to manage students and respond to incidents quickly and effectively. Children are typically grouped into han according to the lines they ride, and schools largely maintain a policy of not sending a child home unless accompanied by at least one other student.

Many schools also enlist email services to send out information to parents and guardians in case of disaster, such as an earthquake, and to report safety issues in areas around school routes. 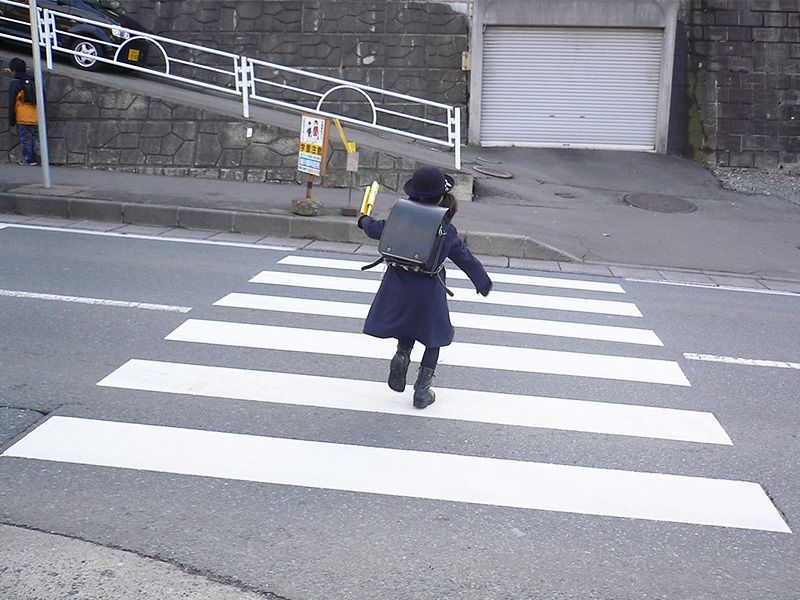 A child uses a crossing flag to cross the road.

In addition to safety measures, elementary students face many rules regulating their behavior as they travel between their front door and the school gate. Teachers and administration give regular reminders to obey traffic rules and maintain public manners, such as walking quietly in single file and not taking shortcuts. Serious infractions, including taking a different route, stopping at shops—although convenience stores and other businesses along routes are places children can seek shelter if needed—or disturbing other passengers on trains and buses, often result in reprimands, and multiple infringements may lead to a parent or guardian being called in to school.

There is little time for mischief, however, as schools typically allow pupils only a narrow 20- to 30-minute window to pass through the front gate. The end of the day is less rushed, but children are still expected to make a beeline for home. It is not uncommon for concerned residents to report even minor tsūgakuro violations to the school, showing a Japanese tendency toward communal policing.

Community awareness is a vital aspect of why Japanese elementary students are able to attend school on their own. Police run regular traffic safety campaigns and hold training courses for volunteer school guards, and officers are frequently seen standing guard at busy intersections along school routes. 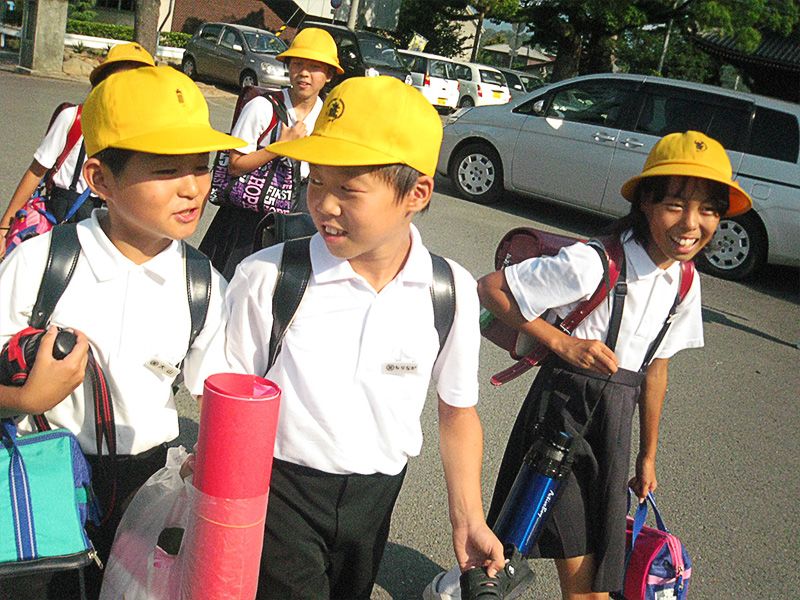 School attire adds to safety by making students stand out. The most recognizable feature is the randoseru: square schoolbags, normally black or red, worn by elementary students throughout the country. These bags are often festooned with an array of items, including light-reflecting stickers and emergency buzzers or whistles. Recent models even have pockets for small, GPS-capable mobile phones that let mom and dad check on the child’s location from their own handsets. Many schools have uniforms, and those that don’t usually have pupils don bright yellow hats or similar headwear.

Even with all the precautions, there have been incidents of children being abducted or falling victim to traffic accidents on their way to or from school. In general, however, such instances are not met with a move to pull children closer, but by efforts to improve safety measures and boost public awareness.