Going to the Dogs and Cats: Two of Japan’s Favorite Pets

Just like other people all around the world, many Japanese have plenty of reasons for wanting a pet, including a desire for companionship and a love of animals. Even while busy schedules, expense, and space restraints in crowded cities such as Tokyo present considerable hurdles to ownership, many residents manage to find space in their homes and hearts to keep a furry comrade. And while this comrade is most often a dog, as it has been for years, the cat is now in position to become the nation's most popular pet choice.

Dog and Cat Population Mostly Even

According to Ministry of Health, Labor, and Welfare statistics, in 2014 there were 6.9 million registered dogs in Japan. (Registration is mandatory within 30 days of obtaining an animal as part of antirabies measures.) The government encourages cat owners to neuter or spay their pets and keep them indoors, but in general felines are not subject to the same protocols as their canine counterparts and there is no official count. The Japan Pet Food Association, however, estimated in 2015 that Japanese kept 9.8 million cats in homes—a number that many believe is underreported, as it excludes strays and those kept outdoors. For the same year the JPFA put the number of dogs, including unregistered pooches, at 9.9 million. Over the last decade feline figures have remained steady, but the count for canines has steadily declined, pointing to a gradual shift in pet preferences. 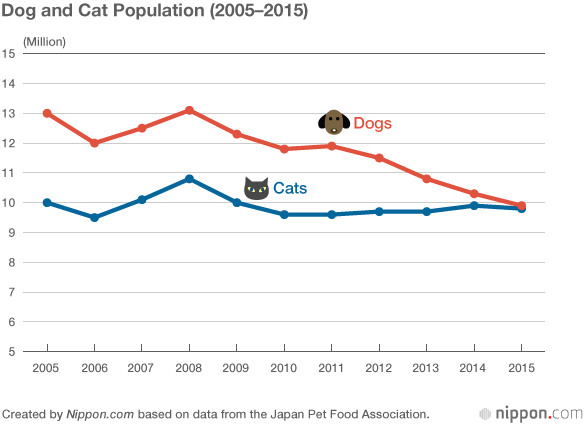 Based on the pet registration figures, per capita there was one dog for every 18 people in Japan. The JPFA, meanwhile, estimates that 14% of Japanese households own a dog and 10% have a cat. By comparison, figures are upward of 47% for dogs and 37% for cats in the United States and 24% and 21%, respectively, in Europe.

While the demographic disparity between the two pet types has narrowed over the years, JPFA figures show the country takes a greater interest in dogs, with 23% of Japanese saying they would like to have one compared to 16% for cats. Motives for ownership, on the other hand, tend to be similar. Below are the results of a 2015 JPFA survey of around 1,700 owners on why they decided to keep a dog or cat.

As the survey illustrates, the leading reasons for Japanese owning a dog or cat  are for comfort, to replace a deceased pet, and to improve family communication. In the United States, by way of comparison, a 2007 Gallup survey showed a love of animals, a desire for companionship, and a decision reached by the family as leading motives for keeping a dog or cat.

Conversely, leading deterrents to ownership in Japan were living in a place that does not allow animals, the inability to provide proper care, and the emotional burden if a pet has to be given away or dies. 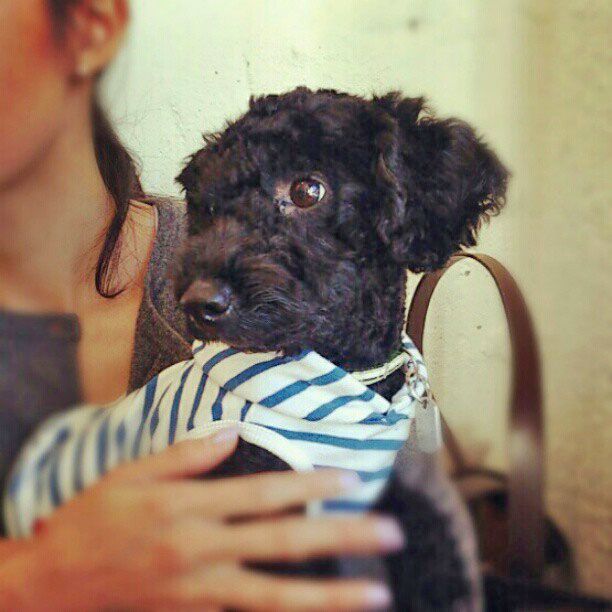 A dog accompanies its owner at a café allowing pets.

There is much to consider in Japan when taking on the task of pet ownership. Perhaps the most important of these is the residential situation. Renters must first get permission from their landlord, and renters and homeowners alike must take precautions not to disturb neighbors with nighttime barking or caterwauling.

Space concerns and neighborhood environments are particularly pertinent to dog owners, and are reflected in a general preference for small and medium-sized breeds. According to the JPFA survey, the three top breeds in 2015 were the miniature dachshund, the toy poodle, and a domestic breed, the shiba inu. Cat owners tend to be less picky, with mixed breeds being the overwhelming choice. Those choosing purebreds, however, prefer the American shorthair and Scottish fold.

Neighborhood environs are also a factor. Some cities have seen an uptick in pet-friendly spaces, including dog parks and cafés serving canine treats, but these are generally limited. Leash laws are enforced and owners are expected to clean up after their animals when out walking.

The costs of keeping a pet can add up. According to the JPFA, average monthly outlays, including food and veterinary expenses, totaled ¥7,800 for dogs and ¥5,000 for cats. And as one Tokyo resident reports, pet insurance, which costs some ¥2,000 a month, can be well worth it to avoid veterinary bills costing hundreds of thousands of yen. 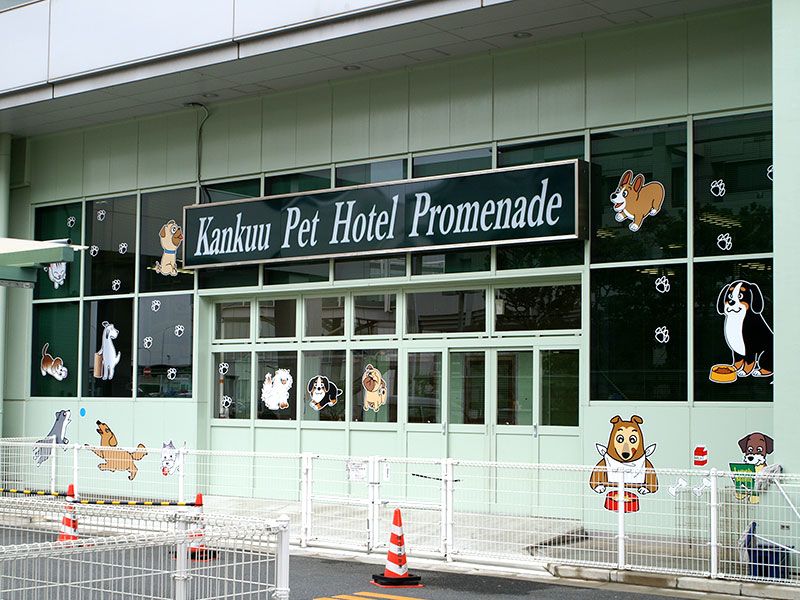 Arrangements must also be made for pets when traveling. There are pet hotels, but prices can be daunting. In Tokyo a large dog can be kept in a typical kennel-type facility for about ¥4,000 a night, while a private room can cost up to ¥10,000. If a pet owner is traveling or moving overseas, still other concerns come into play. Japan’s Animal Quarantine Service provides owners with information on taking animals out as well as  bringing them into Japan. Cost and the prospect of a long quarantine may make traveling with a pet less appealing. 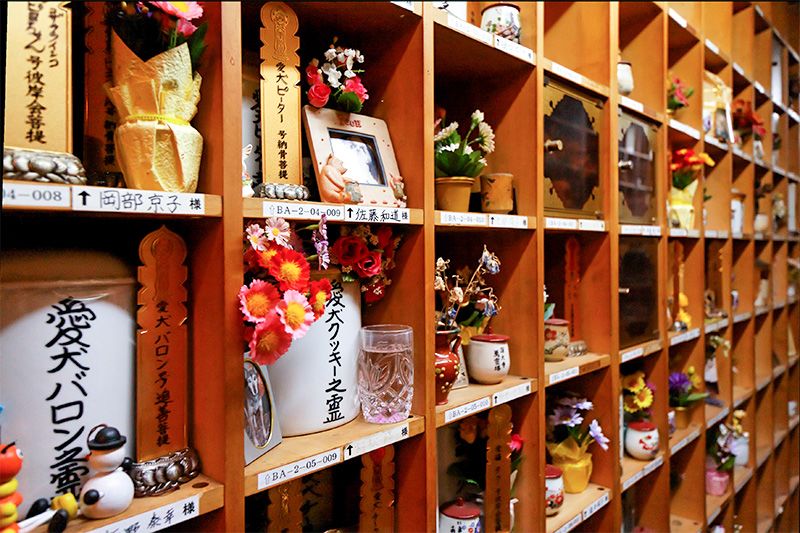 Mementos and urns containing pet ashes fill the cubbies at this pet mausoleum near the temple Jindaiji in Chōfu, Tokyo.

It is heartbreaking when a beloved pet dies. But aside from grief, owners must also deal with disposal of the remains. In tightly packed cities, health and sanitation concerns exclude backyard burials as an option. However, many municipalities provide a disposal service for a small fee. There are also a wide variety of pet funeral services available to those wishing to more formally honor the memory of a furry friend, ranging from simple cremation and burial to Buddhist services and personalized headstones.

Whatever their final choice may be when the time comes to say an eternal goodbye, devoted owners will have years to enjoy the companionship of their dog or cat.

(Banner photo: A dog rests and cats at a cat café in Tokyo. Image of cats courtesy of Hososhima Takashi.)