Buried by a Volcano: The Destructive Past of Japan’s Mount Asama

The residents of Kanbara, a tiny town tucked among rolling hills and fields in western Gunma Prefecture, know all too well the destructive potential of Mount Asama. The fitful volcano, towering 2,568 meters into the sky some 12 kilometers to the south, roared to life in the late eighteenth century, spewing ash, stone, and magma far across the landscape. The cataclysmic eruption, one of the most widely documented natural disasters of early modern Japan, lasted four months and triggered a lahar—a high-velocity avalanche of superheated gas and debris—that devastated the sleepy farming community.

Asama’s relative quiet over the subsequent centuries is now taken for granted in surrounding communities, including Karuizawa, a popular resort town across the border in Nagano Prefecture. But Kanbara has kept alive the memory of victims of the tragedy and the harrowing story of a small band of survivors who narrowly escaped ruin and rebuilt the village. 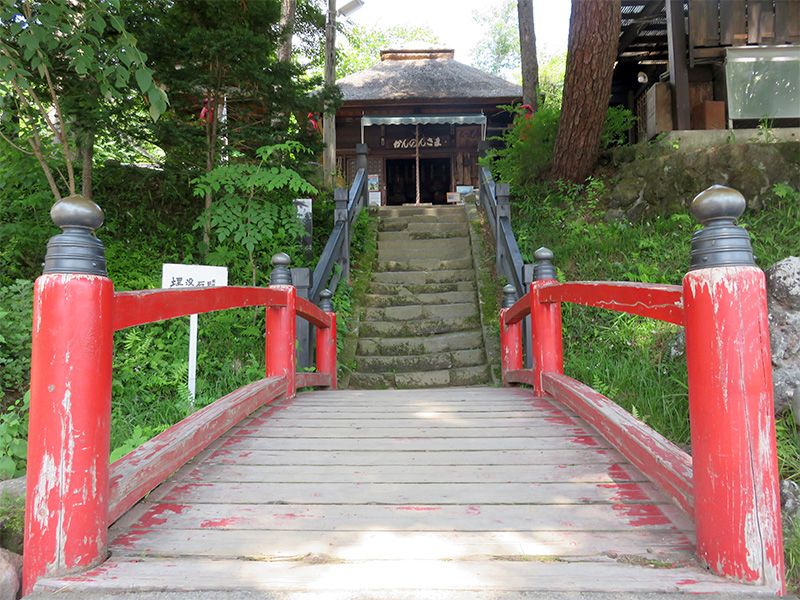 In the Volcano’s Shadow

During the Edo period (1603–1868) Kanbara was a bustling post town on the mountainous Shinshū highway. Its handful of inns and tea houses lodged and entertained merchants, pilgrims, and a host of other wayfarers who traversed the winding roadway. It was also an important transport center for goods passing along the smaller routes that crisscrossed the region, providing a base of operations for several wholesalers along with a small army of packhorses and drivers. Most of the populace, though—numbering around 570 at the time of the eruption—made a meager living by tilling the rocky volcanic soil, growing wheat, millet, and other crops suited to the altitude and climate.

Life along the roadway and elsewhere was thrown into disarray in the spring of 1783, the third year of the Tenmei era, when Mount Asama began to stir. In May the volcano shook from its slumber in a series of small-scale earthquakes and eruptions. The intensity of events steadily grew until in mid-July Asama vomited a massive plume of black smoke into the air, blanketing the land in choking ash.

The volcano fumed almost daily from then on, concentrating its fury southward. Historical accounts tell of widespread destruction to homes and crops extending for hundreds of kilometers. In nearby Karuizawa, then an important post town on the vital Nakasendō route linking Edo and Kyoto, deep drifts of cinder and pumice snarled traffic and deadly barrages of searing-hot stones terrorized residents and travelers. 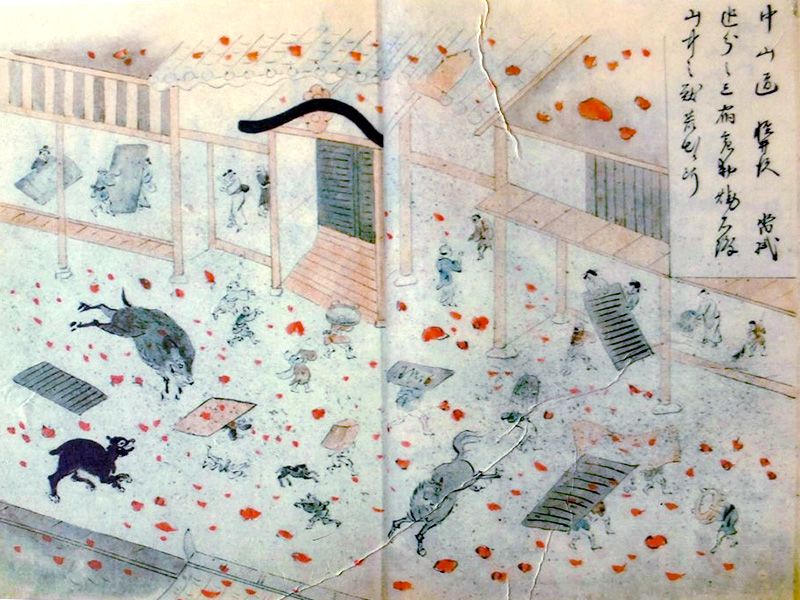 A picture depicting mayhem in Karuizawa as Asama rains hot rocks and ash down on the town. (Image courtesy of Misaizu Hiroo)

After nearly four months, the severity of the eruption reached its peak starting on the night of August 2. In a spectacular display of raw energy, the volcano raged for three straight days, sending up columns of ash and fire in massive explosions felt as far away as Kyoto, some 300 kilometers distant. Shortly after the outburst subsided, Asama sent a blazing river of magma streaming down its northern slope, forming what is now known as the Onioshidashi lave flow. Shortly after this, a heat- and quake-weakened section of the north flank of the mountain collapsed. 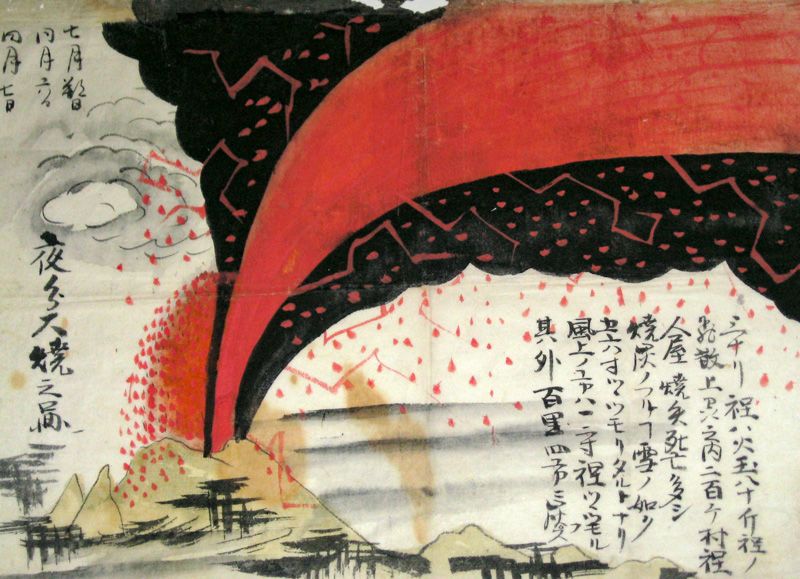 A depiction of the eruption of Mount Asama. (Image courtesy of Misaizu Hiroo)

Buried in an Instant

Sheltered in a dale north of Asama, Kanbara had come through the eruption intact. The lengthy ordeal had frayed nerves, though, and when the lahar occurred midmorning on August 5, most of the villagers were taking advantage of the lull in the mountain’s activity to rest. This is thought to be a pivotal factor in the tragedy that occurred next, since many residents were not out working in the fields—where they would have presumably had a greater opportunity for escape—but remained directly in the path of destruction. 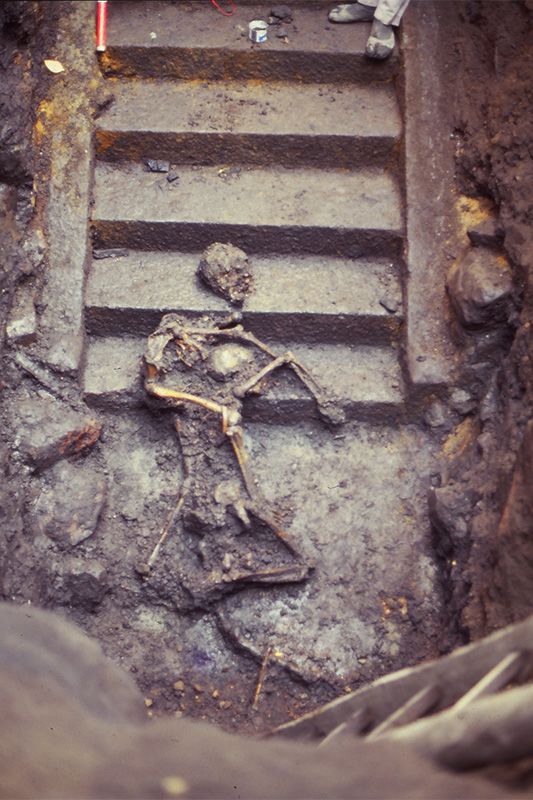 An excavation in 1979 uncovered the remains of two women killed while trying to scale the steps of the Kannon hall. (Photo courtesy of the Tsumagoi History Museum)

As the avalanche bore down on Kanbara, its churning mass of boulders, rock fragments, and magma alerted villagers with an ominous rumble. But there was scant time to flee the onrushing wall of earth. Traveling at tremendous speed, it crashed down on the town in a matter of minutes, engulfing residents as they ran and burying homes, storehouses, and fields in mountains of debris.

The sole refuge from the chaos was the town’s Kannon hall, a reed-thatched building dedicated to the goddess of mercy. Perched high on a hillside above the hamlet, it stood atop a stone staircase just out of harm’s way. Records show, though, that only 93 people, less than a sixth of the population, succeeded in scaling the 50 steps to safety.

In some cases, the thinnest of lines separated survivors and victims. In 1979 an excavation of the stairway unearthed the skeletons of two women. The position of the bodies showed that the younger of the pair, perhaps a daughter or sister, was carrying her older companion up the steps on her back when both were buried under smoldering rubble.

After claiming Kanbara, the lahar crashed into the Agatsuma River at the far end of the village, absorbing water and transforming into a deadly torrent that scoured the banks of the narrow waterway. The turbid mudflow quickly worked its way downstream, merging with the larger Tone River and spreading destruction to the south and east. 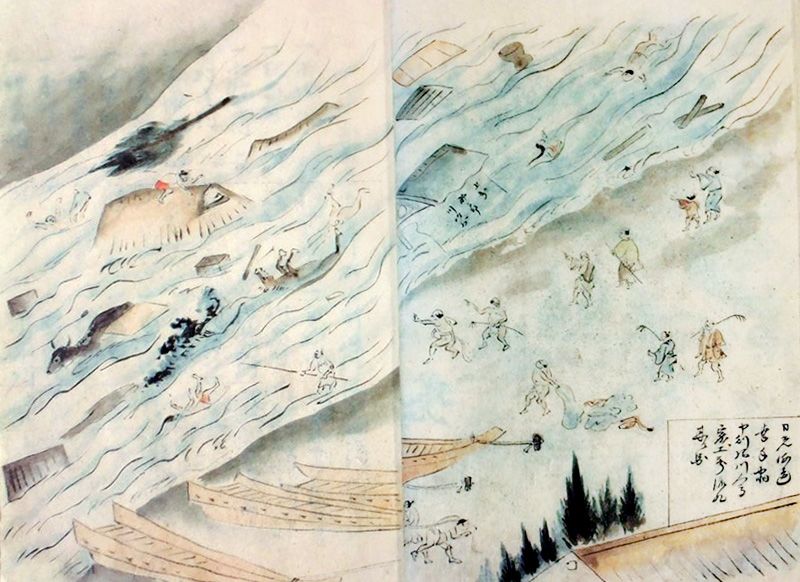 A print depicting the mudflow in the town of Satte in what is now Saitama Prefecture. (Image courtesy of Misaizu Hiroo) 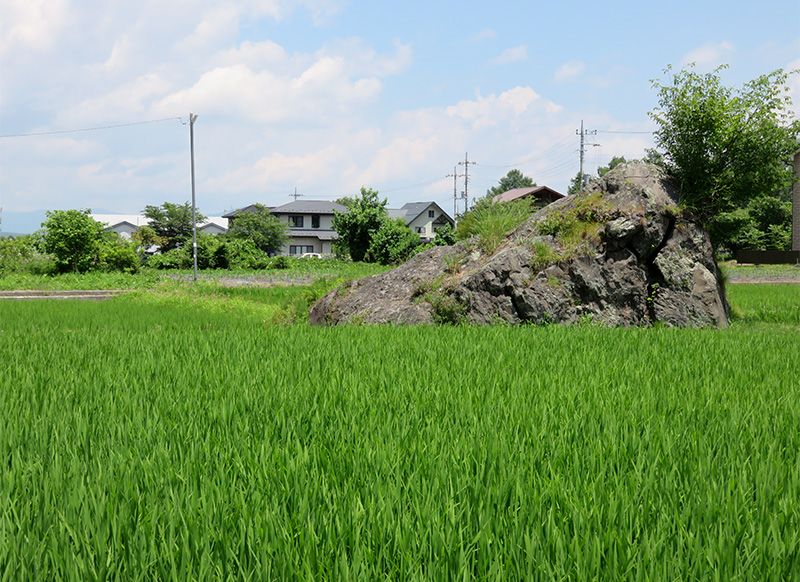 Even as their village lay freshly entombed, the clutch of survivors in Kanbara were allowed scarce time to mourn before they began to reconstruct their shattered community. Leaders in neighboring hamlets led relief efforts, providing food and shelter and even traveling to the capital of Edo to petition the central government for funds.

After the basic needs of the survivors had been met, the primary concern of became the reestablishment of the town. Under the direction of the local magistrate, widows, widowers, and orphans were joined into new ie, or households, the basic social unit during the Edo period, through marriage and adoption. To do so, though, required discarding the village’s established hierarchy, a drastic step in a period with a clearly defined social pecking order.

In October, a mere three months after the disaster, a barebones wedding service (most of the regalia had to be borrowed from surrounding towns) for seven couples took place in one of the few buildings that remained standing in Kanbara. Other marriages followed, and in the succeeding months a new village slowly emerged atop the ruins of the old one. Homes and inns were erected, a new main road was laid, and a canal for daily needs and watering pack horses was dug. Reconstruction closely followed the previous layout, hastening Kanbara’s return as a post town. 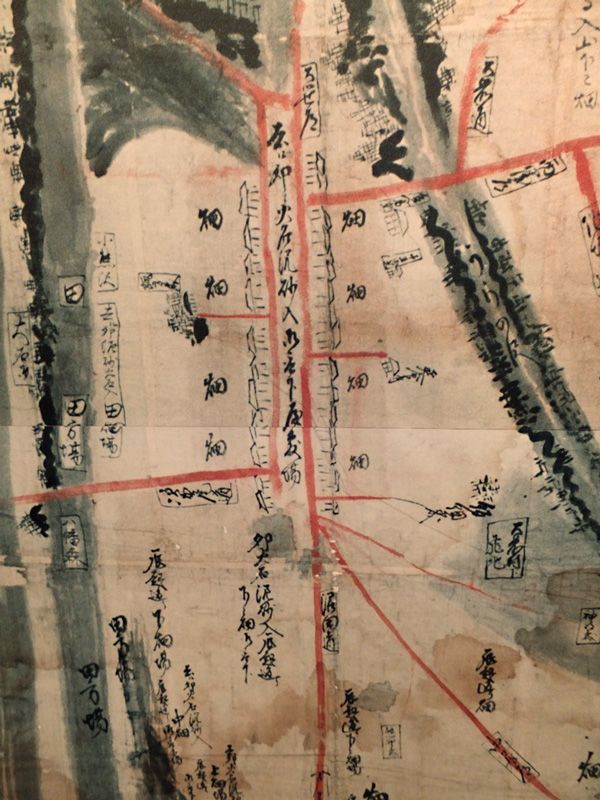 A contemporary map of the newly constructed Kanbara. (Image courtesy of the Tsumagoi History Museum)

Archeological excavations have uncovered a wide variety of artifacts from the time of the eruption, including daily items such as ceramic plates and bowls, millstones, and toiletries along with statues and other Buddhist regalia. The remains of several victims have also been discovered, providing clues about what life was like in the village right up to its destruction. 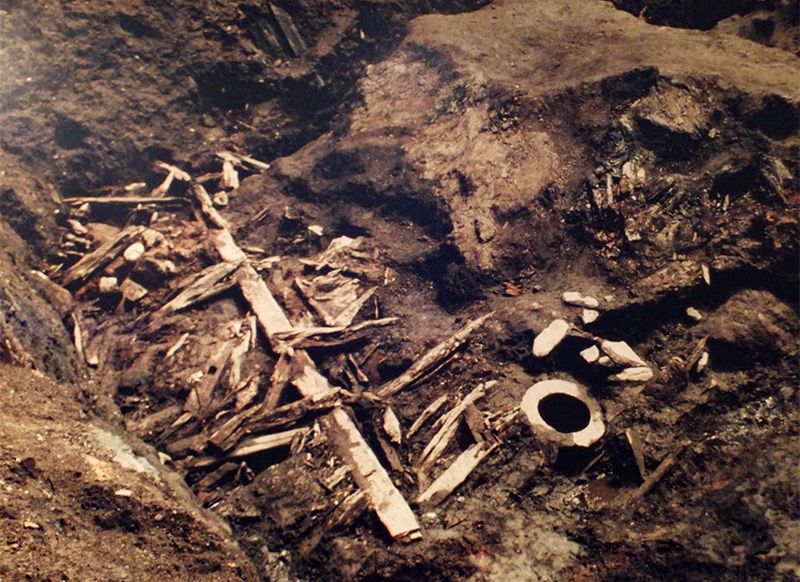 The remnants of a house and a millstone (lower right) unearthed in an excavation in 1979. (Photo courtesy of Tsumagoi History Museum)

For more than 230 years, the residents of Kanbara have continued to honor those killed in the debris avalanche in annual services held at the Kannon hall. The community has also erected a small museum to preserve its history, filling it with artifacts unearthed in archeological excavations carried out over the years.

The Kannon hall, too, has relics on display—although the most poignant reminders of the disaster remain the stone stairway, now buried up to the fifteenth step, and Mount Asama soaring, silent and beautiful, on the horizon.

(Originally written in English. Banner photo: Mount Asama and the Onioshidashi lava flow in the foreground. All photos by author unless where otherwise noted.) 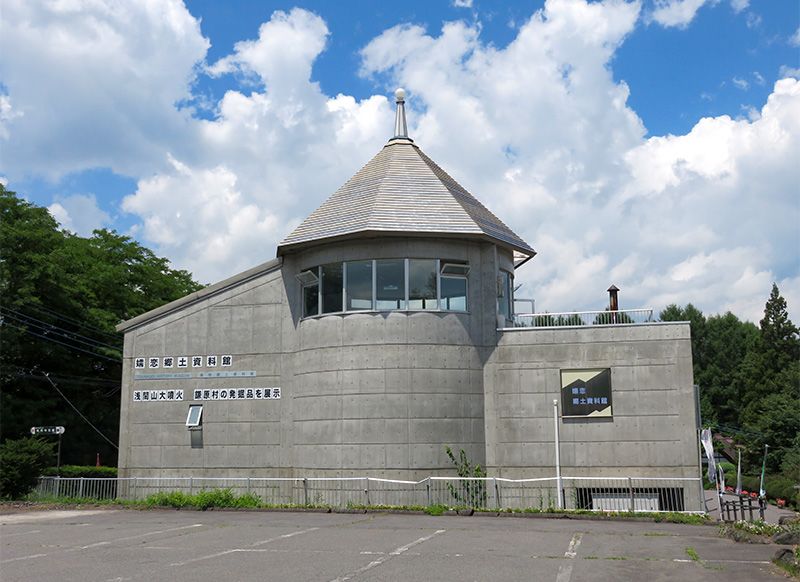