Sumō boasts an impressive history that by some accounts stretches back 2,000 years. Nearly every aspect of the sport—from the dress and customs of wrestlers to the elaborate rituals performed at tournaments—appears to date from antiquity.

However, many facets of sumō familiar to fans today emerged in modern times. Waseda University Professor Lee Thompson, during a recent talk at the International House of Japan in Tokyo, shed light on several of these, including the current championship system—whereby the rikishi, or wrestler, with the best record claims top tournament honors—and aspects of the sport’s traditional image.

A Focus on Achievement

Thompson, a specialist in sports sociology and the coauthor of the comprehensive Japanese Sports: A History, traces the start of these changes to the middle of the Meiji era (1868–1912) and attributes them largely to the influence of newspapers. 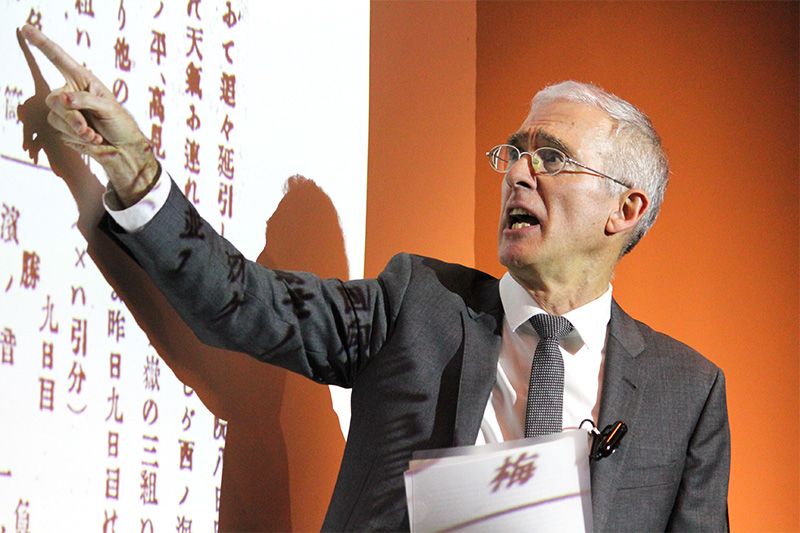 One modern invention that revolutionized the structure of sumō was the development of a championship system grounded in individual achievement. Thompson notes that tournaments, or basho, during most of sumō’s history did not have overall champions or offer prizes to top-performing wrestlers. A rikishi’s record at a tourney was of little consequence, and promotion through the ranks was more closely tied to popularity than dominance in the ring.

Starting in the latter half of the nineteenth century, though, newspapers gradually shifted public interest toward wrestlers’ overall records. An early development in this was the advent of scoresheets known as hoshitori-hyō, literally charts counting the “stars” racked up by rikishi during their bouts. These debuted in the pages of the Yomiuri Shimbun in 1884 as rudimentary summaries of results published at the end of a basho. By 1900, scoresheets had evolved to be a central part of papers’ daily coverage of tournaments. More than a century later, they have become comprehensive, at-a-glance rundowns of tourney leaders in the upper makunouchi division.

Hoshitori-hyō were helped along by the introduction of awards for top-performing wrestlers that further focused fans’ attention on winners and losers. The newspaper Jiji Shinpō took the pioneering step of offering an award at a basho in 1889, choosing to give it to any wrestler who finished undefeated. At the time, though, rules provided for a variety of outcomes beyond just clear victors and vanquished. For example, a standoff by equally matched contestants could end in a draw, and absences and no-contests were recorded as such and did not result in forfeiture. Under this system a rikishi could finish a tournament unbeaten without winning all—or, theoretically, any—of his matches.

A scrappy grappler in the top makunouchi division named Konishiki claimed the inaugural prize, but Thompson points out he did so without winning all his matches, finishing with a record of seven wins, one tie, and one no-decision. Trophies were also given to two lower-division rikishi after the unbeaten pair wrestled to a draw on the final day of the basho.

Other newspapers quickly followed suit with awards of their own for unbeaten wrestlers. However, without a way to decide a definite winner, prizes went unclaimed if no rikishi made it through a tournament unconquered. Recognizing the problem, dailies such as the Osaka Mainichi Shimbun had by 1900 begun bestowing awards on wrestlers with the best records. New criteria like giving prizes to the rikishi with the fewest losses or to the higher-ranked wrestler in case of a tie were adopted to address the ambiguity of outcomes and assure a single winner. Later, papers also limited awards to the upper divisions and began presenting regular trophies instead of one-off honors.

As public interest in outcomes grew, newspapers had the task of developing specific terms to parse the ambiguity of records. Thompson cited expressions like zenshō and tsuchi tsukazu (literally “remaining undirtied”), which in today’s sumō parlance mean undefeated, but that at their coining extended to outcomes such as draws and uncontested matches. The phrase yūshō, or championship, first emerged to indicate a wrestler with a sterling record, not the basho winner as it does today. Thompson says that while the establishment of the championship system has fixed much of the sumō lexicon, it continues to develop.

Motivated by the growing popularity, the Nihon Sumō Kyōkai, the association managing the sport, began taking steps to secure a steady flow of paying spectators by institutionalizing aspects of sumō. In 1909 it opened the Kokugikan, a dedicated indoor venue in Tokyo; in 1926 it officially adopted the championship system; and in 1928 it introduced rules like making uncontested bouts forfeitures to guarantee that tournaments ended with one clear-cut winner. One of the final steps in creating the modern championship system came in 1947, when the association initiated a playoff structure to decide champions in the case of tie records.

An Image in Flux

Thompson notes that the media-driven popularity of sumō also spurred changes intended to give the sport a more traditional image. In 1909 the Sumō Association changed the uniforms of gyōji, match referees, from kamishimo, a ceremonial dress of the Edo period (1603–1868), to the more intricate hitatare that dates from the medieval period. Then in 1931, it did away with the rustic irimoya roof over the ring, swapping it for the shinmei-zukuri style commonly used for Shintō shrines.

Radio and television have also had a hand in crafting how sumō is enjoyed in the present day. In 1928, the shikiri, a long ritual where wrestlers build up for matches by repeatedly facing off in a crouch and throwing handfuls of salt, was limited to 10 minutes—it previously had no cutoff time—to accommodate radio broadcasts. For the sake of television broadcasts, this was further shortened to four minutes for the top wrestlers, with shorter times for lower-ranked grapplers.

Thompson also notes that the development of the championship system and the traditionalization of sumō has strongly influenced how modern fans view the sport and its participants. While historically rikishi were not held to especially high moral standards, today they are expected to embody dignity, or hinkaku. However, rikishi are human and make ethical missteps, as illustrated by match-fixing scandals and violence outside the ring in recent years that have sparked media maelstroms.

(Originally published in English. Banner photo: Kisenosato is pushed out of the ring by Tamawashi during the Kyūshū tournament on November 12, 2017. © Jiji.)