Dialogue in Silence: Going Beyond Language Ahead of Tokyo 2020

Aug 20, 2018
As Tokyo prepares for the 2020 Olympic Games, the focus is increasingly on the need to prepare for people of different linguistic capabilities and physical needs. A range of activities are underway to prepare residents and visitors alike to interface with one another in positive ways, both during the sporting events and beyond.

Ready to Welcome Everyone in 2020?

With the Tokyo 2020 Olympic and Paralympic Games drawing ever closer, great emphasis is naturally being placed on making Tokyo’s visitor infrastructure as accessible as possible, from both the physical and the linguistic perspectives.

In terms of physical access, however, progress has not been as smooth as hoped. In May 2017, the International Paralympic Committee voiced concerns that public spaces still had some way to go in order to meet accessibility standards required by Paralympic athletes, officials, and fans, while work to provide sufficient disabled-access accommodation at hotels nationwide has been hampered by the costs involved with renovation.

On the language front, meanwhile, some feel there has been too much focus on English as a one-size-fits-all means of communicating with any and all comers. And while progress has undoubtedly been made in terms of training licensed guide interpreters, as well as tech-based approaches like automatic multilingual interpretation devices and sign-language telephones, there is no guarantee that such solutions will always be on hand when needed.

A range of public and private initiatives are working to bridge these gaps. The universal-design consultancy Miraimo has teamed up with the Nippon Foundation to produce Bmaps, a mobile app that provides information on facilities, restaurants, and hotels adapted for those with physical, visual, and hearing impairments, while the website Accessible Japan, the brainchild of Canadian Tokyo resident Josh Grisdale, offers similar information in English via its website and guidebooks.

Meanwhile, other projects are striving to help people reassess their approach to communication in a way that makes light of language barriers, while promoting greater inclusivity and deeper human connections. The social art experiment Touchy does this through technology, with a skin-contact-triggered camera headset that aims to bring people’s minds back offline and unite us through touch, eye contact, and interaction.

Other initiatives harness the experiences and insights of those with various disabilities to change attitudes to communication and broaden participants’ horizons. One such body is the Universal Event Association, which aims to promote a fully inclusive society. Toward this end the UEA organizes a range of activities, including universal sporting events and an annual Universal Camp on the island of Hachijōjima, one of the most remote parts of the Tokyo metriopolis, lying over 280 kilometers south of the mainland capital’s shores.

A Chance for Dialogue in Shinjuku

Another project currently in the spotlight, with a month-long residency at Shinjuku’s Lumine 0, is Dialogue in Silence, a social entertainment installation that encourages attendees to “go beyond language and set yourself free.” 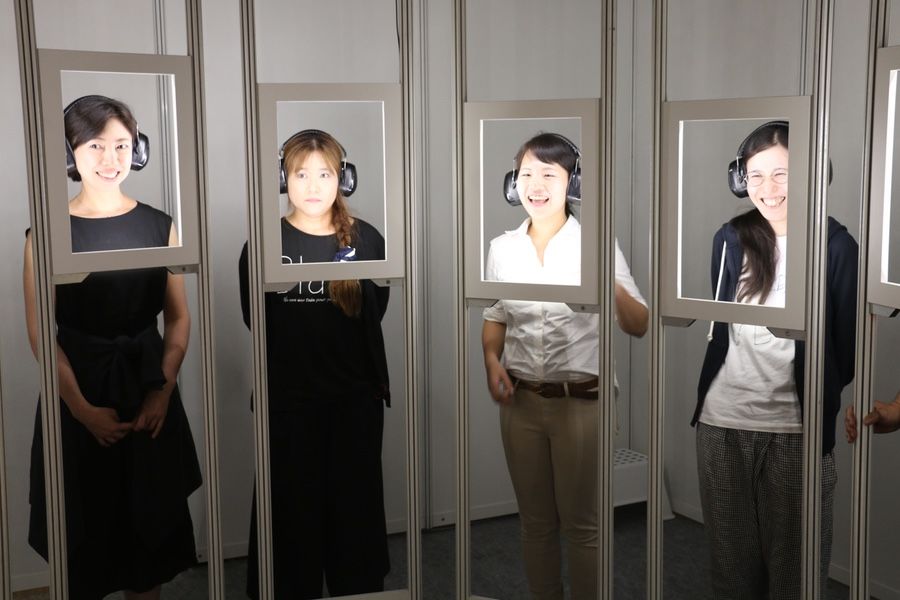 Participants don a set of industrial-grade ear protectors as they are led through a number of rooms by deaf attendants who are experts in the art of non-verbal communication. The guides emphasize the importance of eye contact, facial expressions, and gestures to help their charges complete a series of cooperative activities with mysterious names like “Dance of Hands,” “Gallery of Faces,” and “Forum of Figures.” Before you realize it, the lack of spoken language ceases to feel like a hindrance as, helped by your comrades, you quickly find new ways to express yourself.

Until the final room of the hour-long circuit, even the use of sign language is forbidden, so as to ensure a level playing field regardless of ability, experience, age or linguistic background. In a mixed-nationality group including both deaf and hearing participants, ranging in age from young children to senior citizens, it was remarkable to see how quickly the social boundaries that often circumscribe life in Tokyo gave way to connections of genuine warmth and humanity.

“It made me pay more attention to my counterparts, instead of just trying to get my own point across,” said one participant at the end of the session, “I hope that’s something I can take back into my own day-to-day life.” Another team member concurred: “On the train, for instance, usually everybody’s just staring at their phones the whole time. It made a nice change to look people in the eye and connect with them.”

First launched in Germany in 1998, and since rolled out to other countries and regions including China, France, Israel, Mexico, and Turkey, Dialogue in Silence received its Japanese debut last year. The response of participants was so positive that the program was expanded for its current July 29–August 26 run. 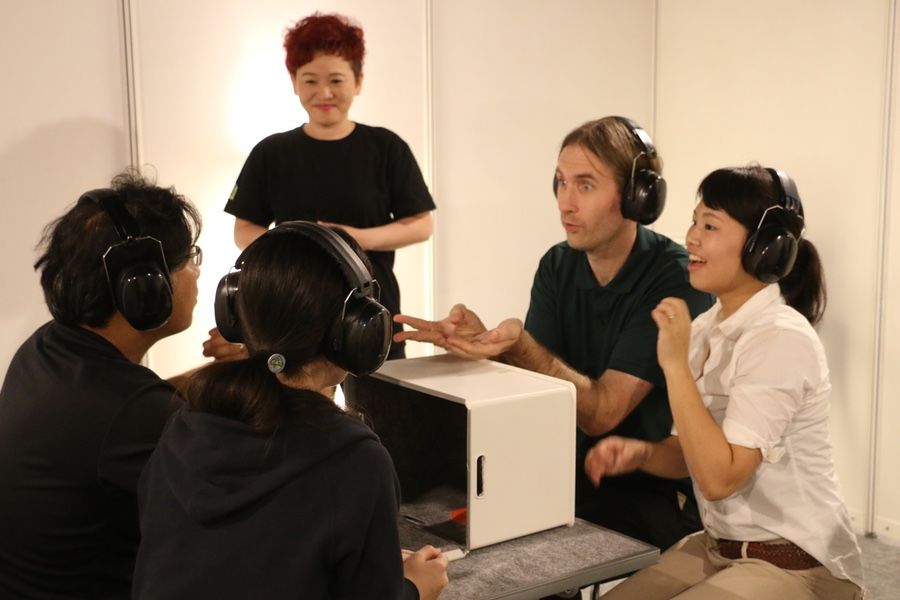 A nonhearing guide watches on as event participants take on the challenge of describing objects to one another without voiced words to help.

The project is an offshoot of Dialogue in the Dark, a social business launched in Germany in 1988. As the name suggests, the original touring installation sought to promote skills of communication, cooperation, and empathy as sighted participants navigate a completely darkened maze with the assistance of blind guides.

Now with franchises around the world, the concept was launched in Japan in 1999, and Dialogue in the Dark Japan has since become one of the only global editions to earn permission to tailor its activities substantially in order to meet local needs. These include a glow-in-the dark logo courtesy of celebrated graphic designer Takada Yui, and even an earthquake-themed program that adds an element of urgency to the usually fun proceedings.

With the organization continuing to expand its promotion of awareness and understanding through installations and team-building exercises that focus on other aspects of diversity, January 2017 saw the Japanese inauguration of Dialogue with Time, a project which shines the spotlight on the unique insights of people in their seventies and older. And moving forward, this group looks set to play a significant role as part of a vibrant ecosystem of NGOs and social businesses working to create a society that takes everybody’s needs into account.