Society Sep 19, 2017
Canadian-born Josh Grisdale has used a wheelchair since he was four years old. For the past decade, he has been living and working in Japan, where he gained citizenship last year. His website Accessible Japan encourages disabled tourists to visit the country by providing information on accessibility and reviews of attractions. 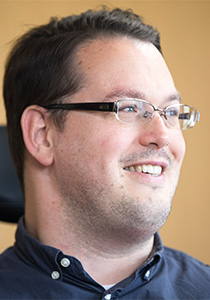 Born in Canada, Josh Grisdale moved permanently to Tokyo in 2007. He manages the website for a group that runs nursing homes, retirement homes, kindergartens, and nursery schools. In his spare time, he works on the Accessible Japan website, which provides information about accessibility to disabled visitors. He has cerebral palsy, is quadriplegic, and has used a wheelchair since the age of four. In 2016, he became a Japanese citizen.

Canadian-born Josh Grisdale’s enthusiasm for encouraging disabled tourists to visit Japan is clear as he describes the impetus behind his Accessible Japan website. “When I first came to the country, there was really no information about accessibility, so I spent a lot of time researching in books or talking to people who live here. After living here myself for a number of years and seeing how great Japan’s accessibility is, I thought that there needed to be a resource for people interested in visiting.”

Grisdale has cerebral palsy that he says was probably caused by a high fever he contracted while a baby. It affects all four of his limbs, and he has been using a wheelchair since he was four years old. The website began with information he gathered from his own perspective, but has expanded to cover other areas of disability. 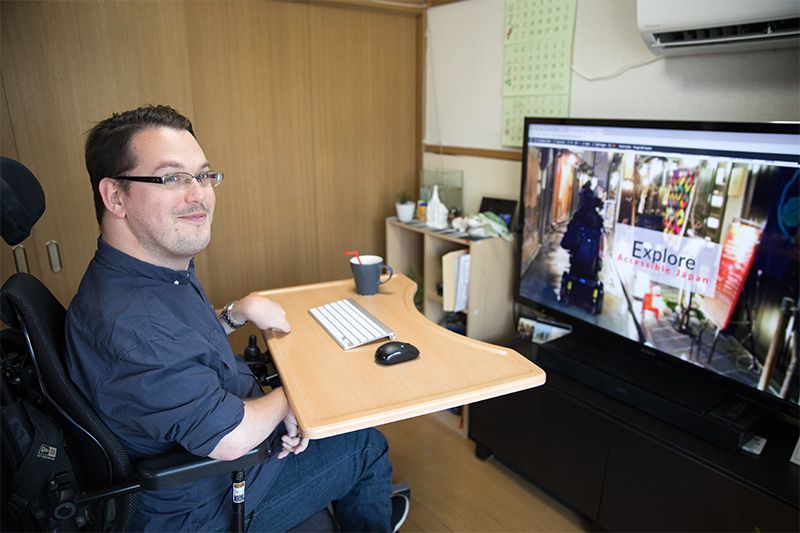 Grisdale at his Tokyo apartment, where he works on Accessible Japan.

“I’ve been asked questions like, ‘Can I bring my guide dog to Japan?’ and this is how a lot of the pages on the website start.” Grisdale also explains that, for example, people with balance problems or poor knees have different needs from those in wheelchairs. This has changed the way he reviews Japanese tourist spots. “I’ve started looking for whether there are places to sit down, which is not a problem for me.”

Grisdale’s most recommended traditional Tokyo locations are the temple Sensōji in Asakusa and Meiji Shrine. “I think that they’re working very hard to adapt. There’s an elevator at Sensōji, and they’ve done an excellent job of making it look like part of the temple with its color and style.” The elevator blends in so well with the rest of the building that it is easy to miss that it is a later addition. This helps maintain the atmosphere for all visitors, and particularly those who make use of it. 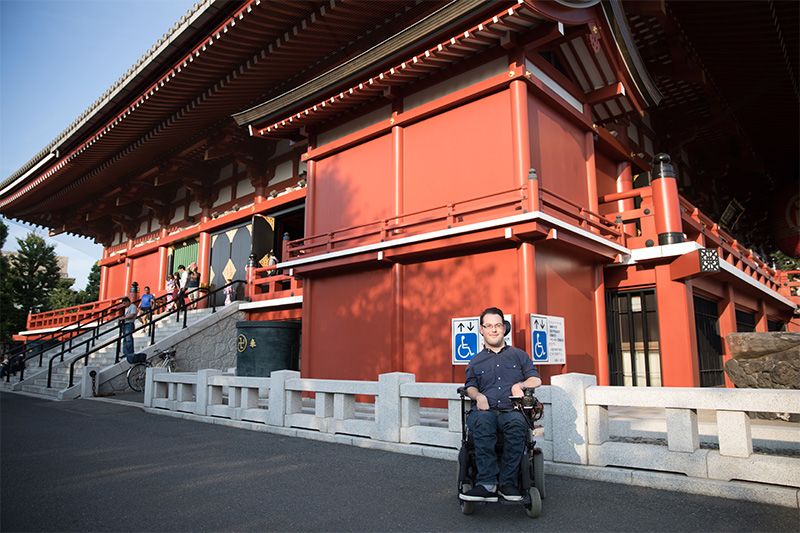 The elevator to one side of Sensōji looks like an extension of the main temple hall.

When making recommendations, Grisdale says the key factor is whether “you can go anywhere everyone else can go.” If only 50% of an attraction is accessible, it is less appealing as a destination. Still, he aims to provide visitors with the information and let them make up their own minds. As well as Tokyo, the site covers tourist spots in Kyoto, Osaka, and Kanazawa. It remains largely a one-man operation Grisdale completes when he is not working at his day job, but sometimes other visitors contribute by sharing their experiences.

Grisdale says that for many disabled tourists, “the biggest challenge is finding restaurants.” This is due to space restrictions and the way buildings are constructed. “A lot of people want to come and have traditional Japanese food,” he comments, “and a lot of the traditional Japanese restaurants have genkan.” These entrance halls have a high step, so wheelchair users face disappointment. “Those aspects that make them very Japanese also make them very inaccessible.” 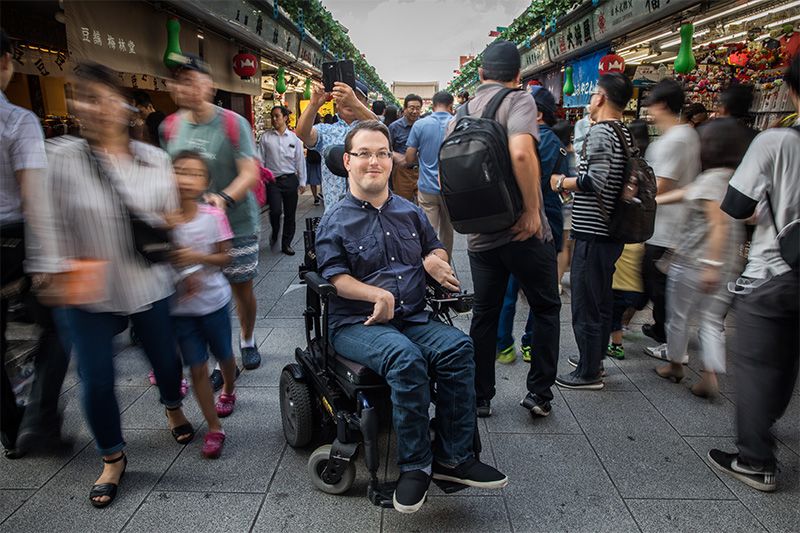 One option is to seek out department stores, which are good places to find accessible restaurants—as well as restrooms—although they may lack a traditional atmosphere. On Accessible Japan, Grisdale also explains how to use the Japanese restaurant guide site Gurunavi to track down establishments that describe themselves as wheelchair accessible. He suggests that people with disabilities affecting their hands should bring their own utensils, as many restaurants serving Japanese cuisine do not have forks available.

Although not a big sports fan, Grisdale says he is looking forward to the Paralympics coming to Tokyo in 2020. He feels it is already raising awareness and understanding of disability in Japan. However, he thinks the country should be more accommodating of aids used in other countries, so as to welcome the influx of fans. “Mobility scooters are uncommon in Japan, but they’re widely used in other places in the world. A lot of people bring them, but often the train companies won’t allow them to be taken on board.” 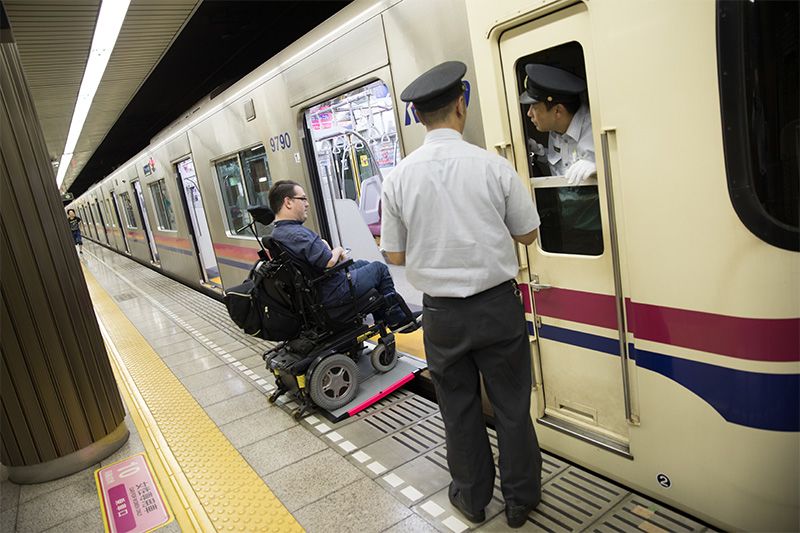 Train services always provide ramps for users with wheelchairs, but people in mobility scooters may be refused entry.

He says hotel rooms will also be a problem. “In general, there are not enough hotel rooms, let alone ones that are wheelchair-accessible. And maybe more legislation on standardization needs to be put into place.” Accommodation described as “barrier-free” can range from an ordinary room that has simply had some grab bars added in the bathroom to something that feels more like staying in a hospital with medical equipment and a white-tiled floor.

Despite some difficulties, Grisdale sees the country’s overall attitude to disability as positive. Good public transport also gives him a sense of freedom. He enjoys his Japanese life so much, he even took citizenship last year. Tokyo is a long way from Uxbridge, the small town near Toronto, Canada, where he grew up. It was only chance that his high school offered classes in Japanese; the school’s auto mechanic teacher had lived in Sapporo and chose the language as his required second teachable subject. “My parents always told me to follow my dreams,” Grisdale says—and his instructor’s enthusiasm fueled his visions of Japan.

In 10 years of living in the country, he has seen many changes and improvements to accessibility, including ramps and elevators. But these also help parents with small children in strollers, as well as the nation’s growing cohort of senior citizens. “At some point, if everybody lives long enough, they’re likely going to be disabled in some way. So I think of it not so much as an extra cost to take care of one small group as an investment for all of our future.”

Accessible Japan on Youtube: Riding the Train or Subway in Japan in a Wheelchair