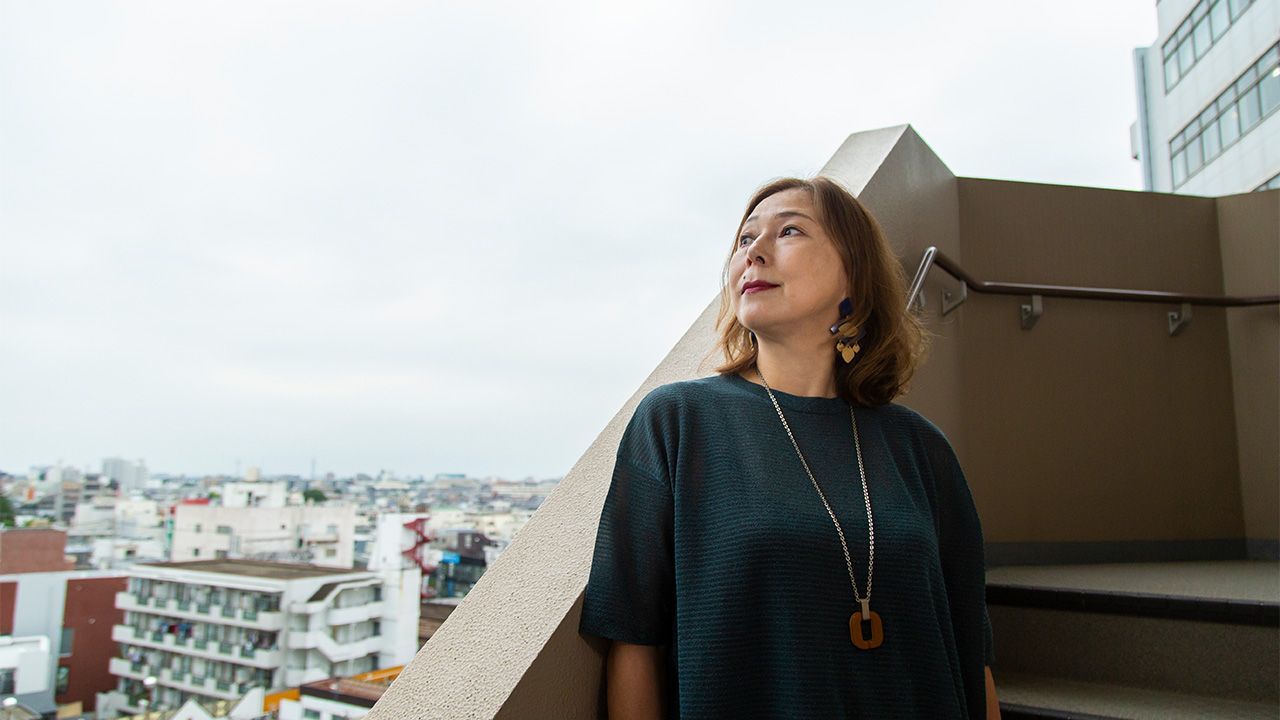 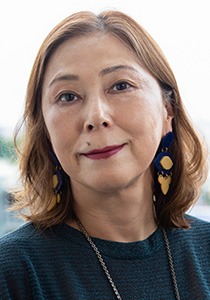 For more than quarter of a century, Kirino Natsuo’s bestselling novels have depicted women in a variety of desperate situations: housewives working the night shift at a food factory who get embroiled in murder, an employee at an elite company who finds fulfilment by selling herself on the streets at night, and a former member of the United Red Army who has kept her past a secret. Her novels portray heroines in difficult circumstances, and reveal the dark side and structural problems of Japanese society today.

In her 2018 novel Rojō no X (Anonymous on the Streets), she depicts female high school students who have lost their moorings and are exploited in the shady world of “subsidized dating” and the “JK industry” (JK stands for joshi kōsei, or “high school girls”). A sequel will be serialized in the Shūkan Asahi from next spring.

The heroine of Anonymous on the Streets is Mayu, a 16-year-old in her first year in high school. When her parents abscond from the family home, she is left in the care of an uncle and his family. Relations between them deteriorate, and Mayu takes to wandering the streets of Shibuya. She finds a part-time job, but is raped and runs away—eventually she is rescued by seventeen-year-old Riona, who makes a living in the shady JK business and is camping out at the apartment of a University of Tokyo student who is one of her former clients. Mayu moves in and joins an odd ménage along with Riona and her friend Mito, who is pregnant with her boyfriend’s child.

To earn the money she needs, Riona sometimes complies with requests for “hidden options,” providing sexual services for her clients, but she is determined not to let Mayu get involved in this side of things. Mayu herself, her eyes still closed to the true nature of the business, remains tempted. The reader anxiously follows the progress of the three girls’ precarious lives together. Will they somehow manage to find a way forward to a better future for themselves without getting caught up in crime and violence?

I met Kirino recently to talk about the background to this book and the process of putting it together. “I think a lot of young women today are living in conditions of poverty that make it difficult for them to see any hope for the future,” she says. “People claim that many want nothing more than to settle down as housewives and let their husbands support them. I’m sure a large part of the reason is that they feel their futures are closed off and sealed. I wanted to understand more about the situation. But at first I didn’t intend to paint too negative a picture—my original idea was to show these girls coming together to resist oppression. As I learned more, I realized that this situation reflects serious problems we have in the structure of our society, and the story took a different turn from the one I had originally intended.”

While thinking about how to begin the novel, Kirino read Nanmin kōkōsei (High School Refugees), written by Nitō Yumeno, the head of the Colabo organization, which helps young women facing difficulties in their lives. The book is based on the author’s own life after she dropped out of high school and took to wandering the streets of Shibuya to escape a difficult situation at home, where her parents were always fighting. Kirino met the author and heard more about her story in person, which really brought home to her just how difficult the situation is for young girls who have nowhere to turn to and nowhere they can call home.

Around the same time, her attention was drawn to records of a horrific event that took place in Iyo, Ehime Prefecture, in 2014, when a 17-year-old girl who had run away from home was abused and murdered by a gang including members of a family where she had initially sought refuge. The victim’s body was found in the closet of a municipal housing unit where the family lived, in which teenage boys and girls would gather to hang out. “It was a dangerous place with all kinds of different teenagers coming and going. It gave me the idea to write a story about young girls of high school age who had been abused or neglected by their parents and had nowhere to turn to.” 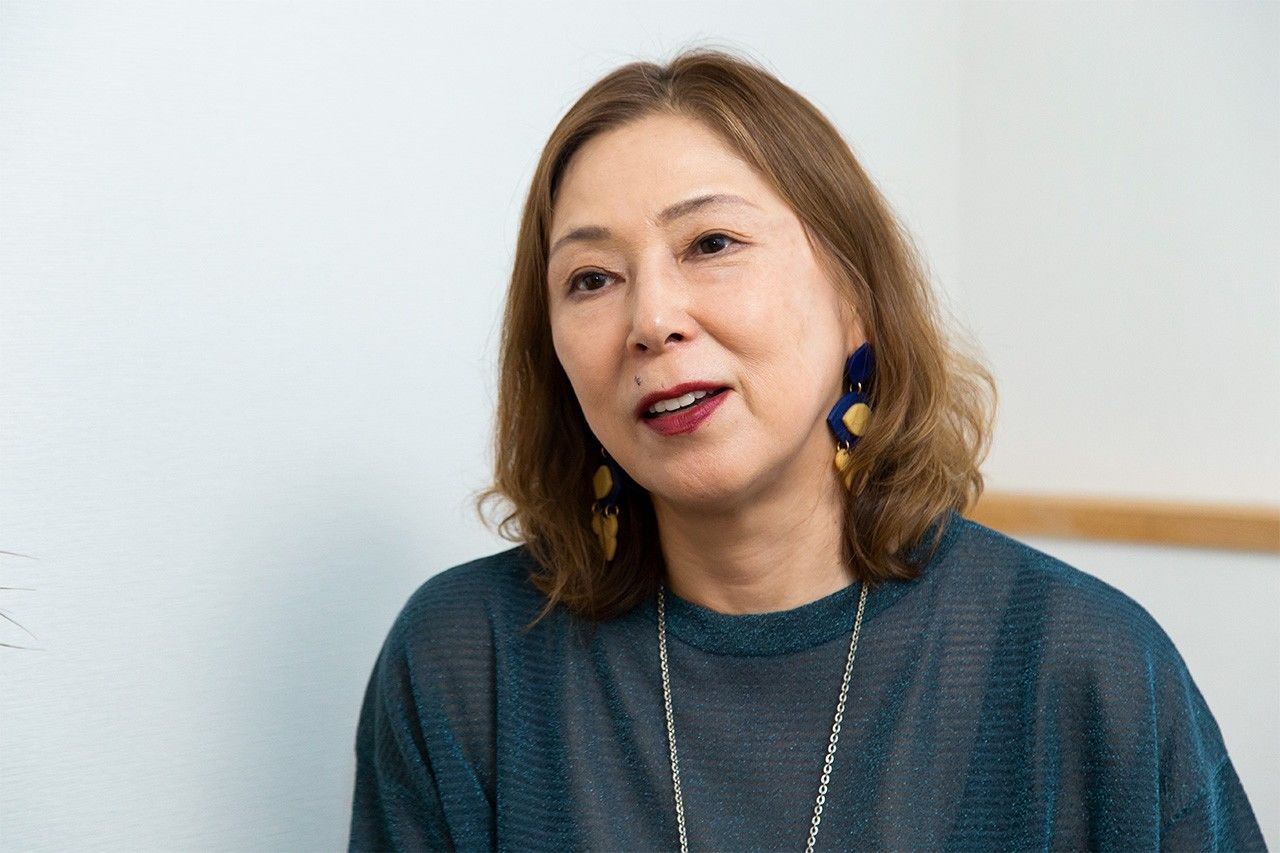 While the story was being serialized, Kirino would regularly walk though areas like Akihabara, Shibuya, and Shinjuku at night, observing the young women there. She also conducted interviews with former managers and scouts for the JK business. She talks of middle-aged men who would calmly tell her that “single-mother families are hot stuff,” (because young girls from economically disadvantaged backgrounds are easy bait for the JK business), speaking with a glint in their eyes of girls 17 or under as “the kind you can really fall in love with,” because of their “different physiques.” Kirino says many of these men saw themselves as merely satisfying the girls’ desires for money. Although she often detected superiority, condescension, and prejudice in the things they said, not once did she discern any sense of remorse or even any awareness that they were exploiting these young girls and subjecting them to physical and psychological abuse.

“In the nineties, when the term enjo kōsai (subsidized dating) first came into vogue in the media, I suppose there was a side of it that saw these young girls as taking advantage of older men and bilking them as a way of earning some extra spending money. There were stories of girls who would sell their used underwear to shops for ridiculously high prices, and things like that. But today it’s not like that, if it ever really was. Today, these young women are totally being exploited.”

Conditions for Young Women Worse Than Ever

Kirino says that the difficulties facing young women are nothing new—they existed when she was young too, she remembers.

“But those were the days of rapid economic growth, when a family could live comfortably off the father’s single income, with the mother staying at home to look after the family. The traditional forms of family life still survived intact, and you always felt you had a place to go home to, even if there were difficulties. There was nothing like the sense of isolation and the feeling that the system has collapsed that many young women have today. The situation seems hopeless. The number of single mother families has also increased, and more and more people are now living in conditions of real poverty and hardship.

“One of the problems we face as a society is the growing number of people working irregular jobs with few benefits, often on low pay. Today, around 70% of workers in such positions are women, and there is a widening gap between a relatively small elite and a growing majority of people trapped in these unstable and ill-paid jobs. Young women are particularly disadvantaged under this system and often find themselves working for low pay in dead-end jobs. It’s hardened into place now as the way industries are structured, so that it’s very hard for people stuck in these positions to see any hope for the future.”

Depicting the Dark Side of Society

One of the things that made Kirino decide to try her luck as a writer was the discrimination against women that she experienced for herself while job-hunting and in the workplace. Kirino married in her twenties, but says she never felt comfortable with the idea of herself as a “housewife.” She started writing after she turned 30, initially producing romance stories and novels aimed at teenagers. At last, she felt, creative writing showed her a way to express her strengths. In 1993, she won the Edogawa Ranpo Prize for Kao ni furikakaru ame (Rain Falling on My Face), a hard-boiled novel featuring a female private detective called Murano Miro. Several more volumes in the Miro series appeared to positive reviews, but the work that really secured her reputation as a writer was Out, which appeared in 1997. The novel’s shocking plot, in which a group of ordinary women work together to dispose of the body after a co-worker kills her abusive husband, made the book a major hit. An English version was published in 2004, and was nominated for an Edgar Award, America’s most prestigious prize for mystery writing.

Out, with its depiction of women pushed to their limits, marked a change for Kirino, pushing her to place more emphasis on works with social issues as their chief motifs. Her novels became marked by incidents of murder, abduction, people going missing—skilfully woven plots full of mystery and suspense that gripped the reader’s attention and refused to let go right until the final page. Her novels were quite different from conventional “entertainment” mystery writing, marked by a new style that depicted the dark side of society and human nature. 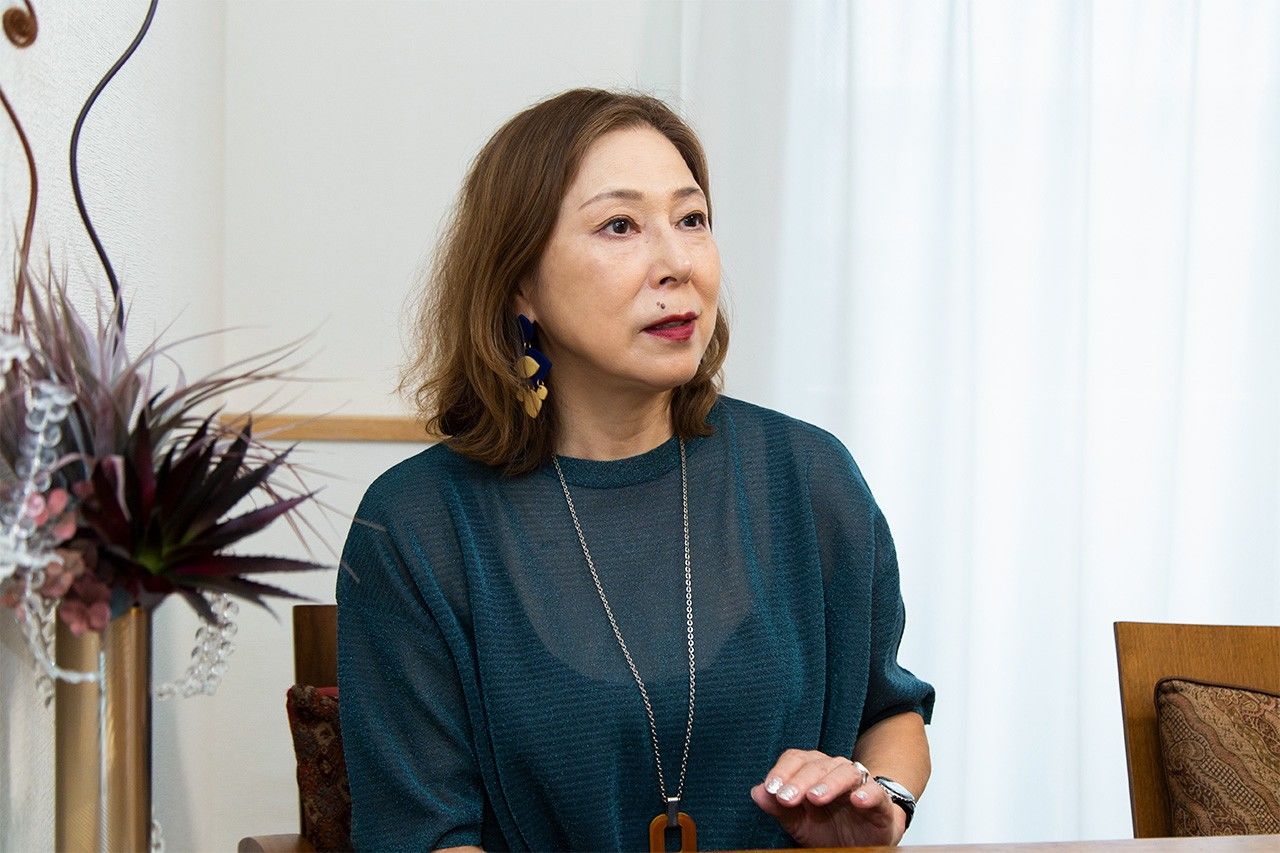 “At one stage, I didn’t like always being referred to as a mystery writer, and I decided I wanted to take a break from writing whodunnit-style plots. I’m more interested in depicting people in difficult situations—who through no fault of their own find themselves pushed into tight corners and impossible situations. This inevitably involves describing the tensions and strains in society. And if you’re writing about people who are being bullied and abused, people who are cut off from the mainstream, then inevitably you’ll be writing about women more often than not. The problems faced by women in contemporary society are sensitive and complex—so I always try to take care to make sure that I’m not treating the issues in a superficial way.”

Light at the End of the Tunnel?

Many of Kirino’s novels have been inspired by real-life events; she likes to let her imagination go to work on incidents like actions by the United Red Army terrorist group or the notorious murder of Watanabe Yasuko, a senior economic researcher at TEPCO who was murdered while moonlighting as a prostitute in Shibuya. “I always have this fear when I’m writing fiction that has been inspired by real events. You’re never sure what effect it might have on reality, what the reverberations and repercussions might be.”

Kirino’s novel before Anonymous on the Streets was Baraka, serialization of which began two months after the Tōhoku earthquake and tsunami disaster of March 2011. At first, Kirino had no intention to write about the disaster at all, but when she started to write, she found the story turning into a dystopian novel set in a Japan in which the disaster at the Fukushima Daiichi nuclear power plant spins out of control, with major explosions at all four reactors. “At the time,” Kirino says, “the situation at the nuclear power station was still evolving, so I was always anxious that I might write something that would turn out to be seriously wrong. But after the disaster I found I couldn’t just carry on writing as normal, as if nothing had happened.”

During the serialization of Anonymous on the Streets, Kirino says she struggled to see any future for the young women she was writing about, and often felt as if she was, “walking through a pitch-black tunnel, with no end in sight. Even when I finished, there was no sense of accomplishment. I was the one who put forward the idea of writing a sequel. I felt I couldn’t let the story end the way it was.”

Will Kirino and her characters succeed in finding light at the end of the tunnel? As a reader of her stories, it is impossible not to hope that her characters will find at least one shard of light somewhere in the darkness. 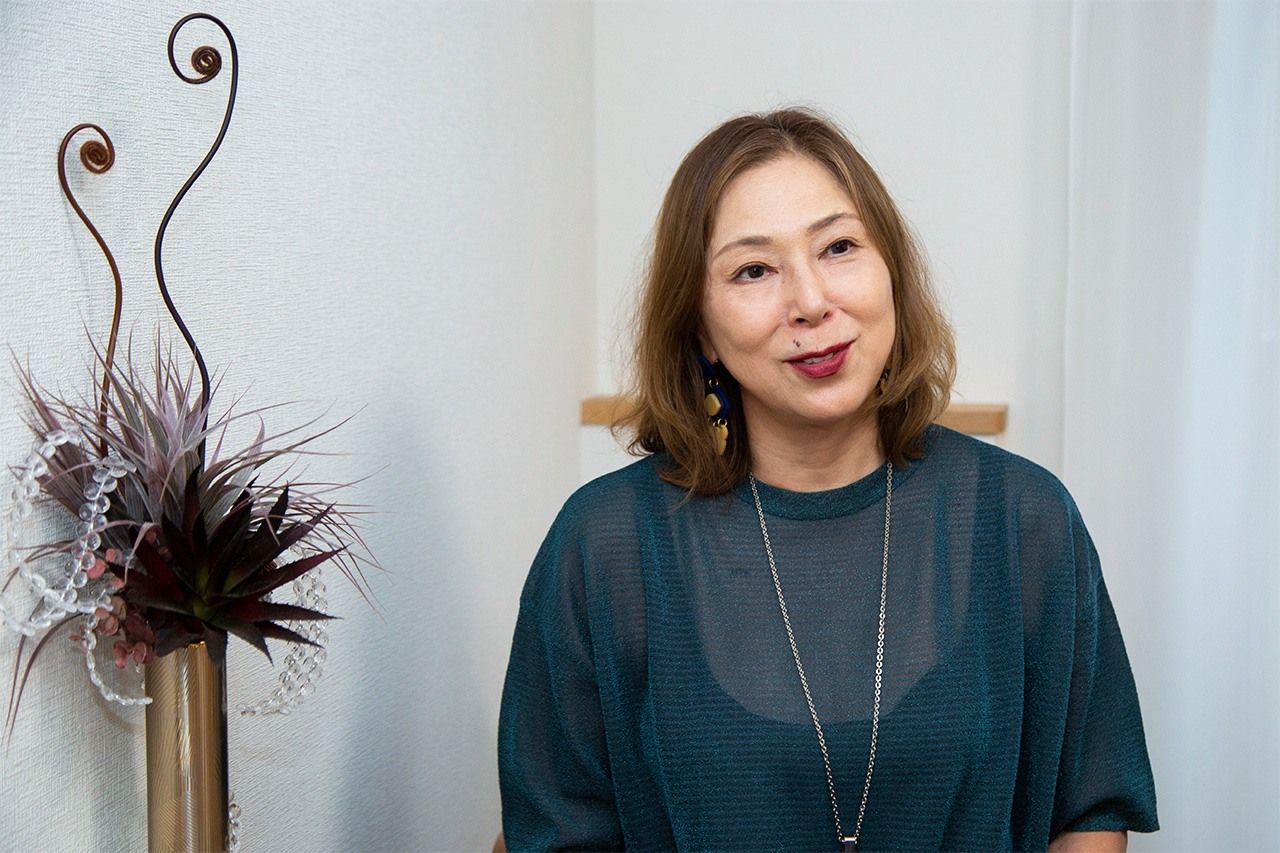 “The difficulties young women face today are beyond comparison with what we faced when I was young,” says Kirino Natsuo. (Pictured in Tokyo, July 2019)

(Originally published in Japanese. Interview and text by Itakura Kimie, photos by Hashino Yukinori, both of Nippon.com.)