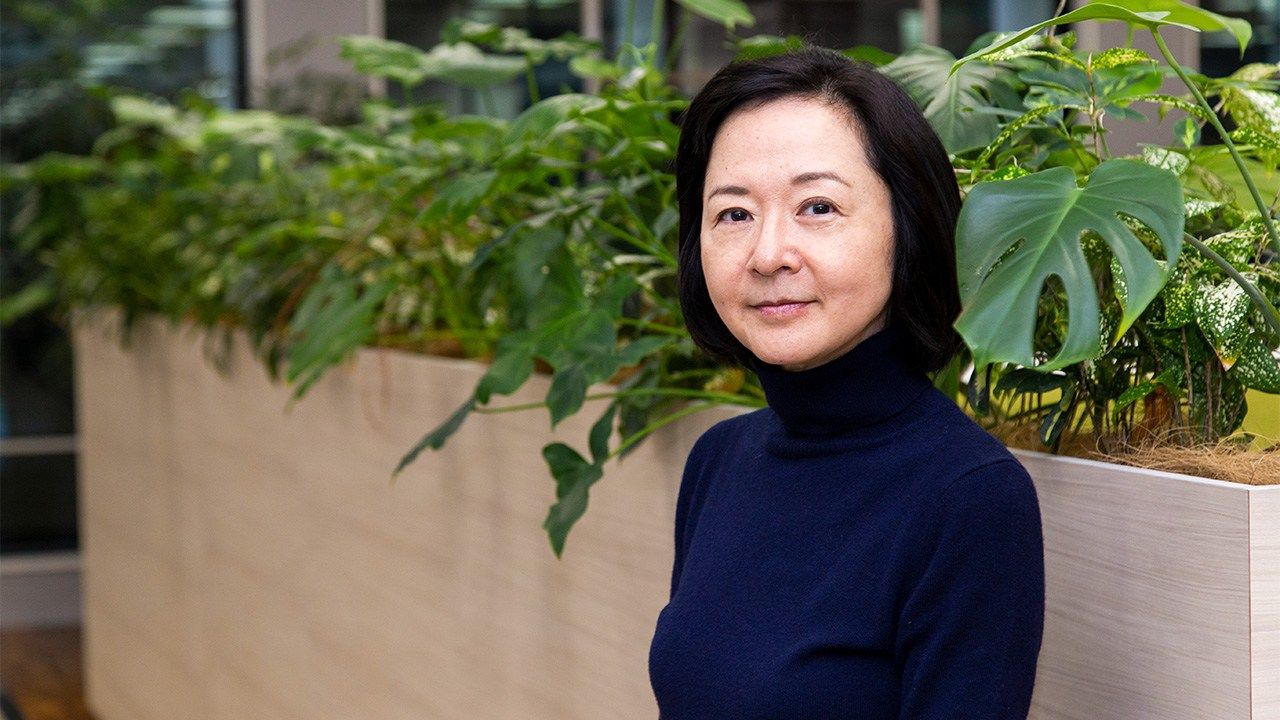 Culture Arts Books Mar 27, 2020
Translated 25 years after it was originally written in Japanese, Ogawa Yōko’s The Memory Police has become a big hit in the English-speaking world. Here she discusses her influences and reactions to the work, as well as her latest novel in Japan. 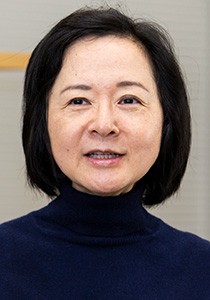 Born in Okayama Prefecture in 1962. Recipient of many literary awards, including the Akutagawa Prize for Ninshin karendā (Pregnancy Calendar) in 1991 and the 2006 Tanizaki Jun’ichirō Prize for Mīna no kōshin (Mina’s March).

The Memory Police, a 2019 translation of an Ogawa Yōko novel first written 25 years earlier, has brought fresh attention to a book that, perhaps surprisingly, is being seen as speaking particularly to our twenty-first century times. Stephen Snyder’s version of Ogawa’s 1994 Hisoyaka na kesshō was a finalist for the National Book Award for Translated Literature, and at the time of writing has reached the longlist stage of the International Booker Prize. It has won new readers as a universal tale of memory and loss, while also being interpreted within the trend for dystopian fiction in the English-speaking world.

Recounting her experience in American media interviews, Ogawa says that while she felt the essence of the work had been thoroughly conveyed through the translation, she was surprised at the links reporters made to the current US political situation. “They were asking me political questions that nobody did 25 years ago. I had no intention of depicting a near-future setting as a political statement—it was meant to be more like the past, before I was born. But when I reread the book for the first time in ages, I was shocked that I’d included a tsunami, and it’s frightening to think that rather than getting further away from the world I created in the book, contemporary readers are connecting it with the near future.”

A Homage to Anne Frank

The Memory Police takes place on an island beset by the quiet disappearance from people’s remembrance of everything from birds and flowers to photographs and calendars. The vanishings are matched by changes in the natural world, and secret police destroy any items that remain. Once they are gone, most of the islanders are not even aware of what they have lost, but those residents who can remember are hunted down by the police and taken away. One day the narrator, an author, hides her editor in an underground room.

The story is indeed relatable to today’s anxieties over the surveillance society, media manipulation, and authoritarianism. When writing it, however, Ogawa felt she was paying tribute to Anne Frank’s The Diary of a Young Girl, which made a strong impression on her when she read it as a teenager. One thing it taught her was that she had been given the freedom to express in words what she was feeling inside.

“For me, reading The Diary of a Young Girl was the reason I became an author. On the day the editor moves to the secret room, it’s raining heavily. This was the same for Anne Frank and her family. As everyone lowered their heads and hurried through the downpour, nobody challenged their rapid pace toward the hiding place. My scene was meant to pay homage to Anne.” 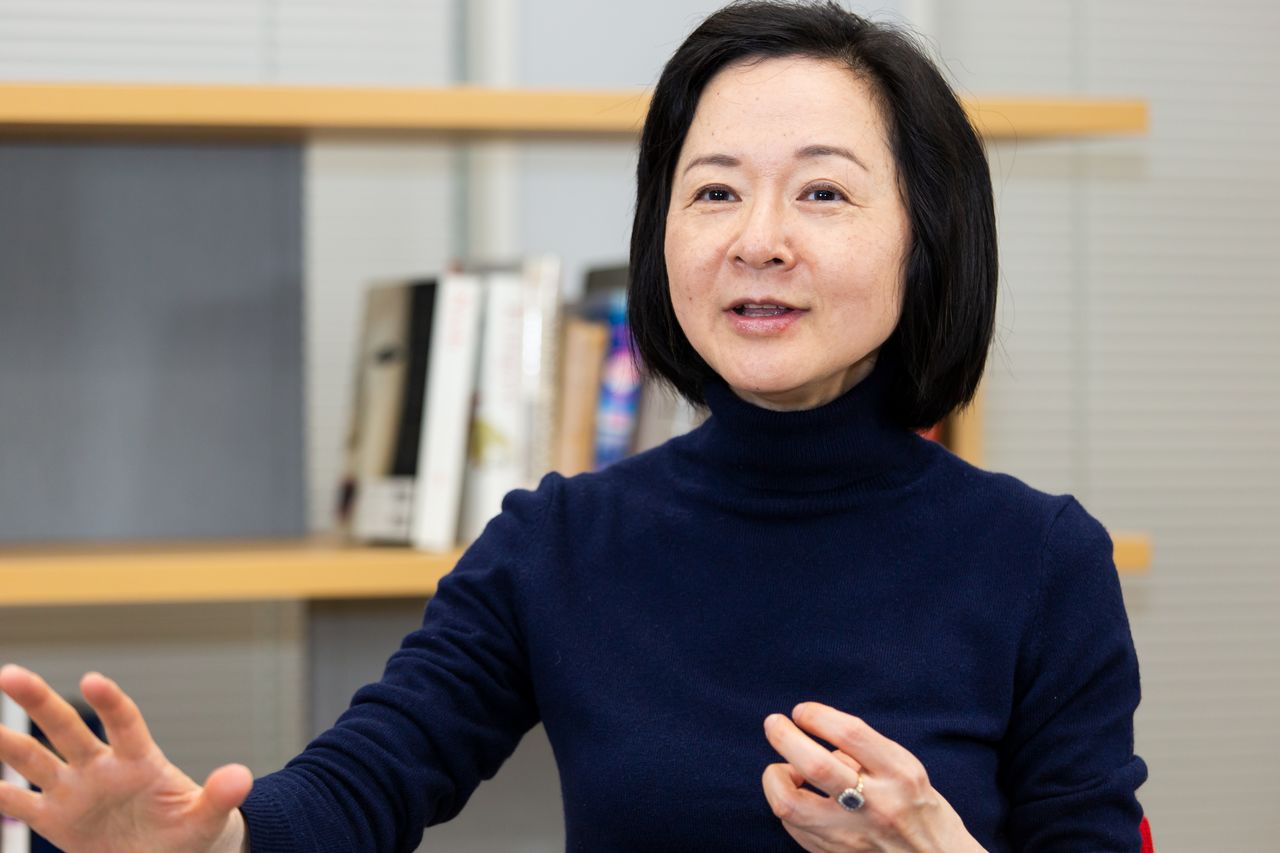 Ogawa wanted to put Frank’s experience into her own story. By writing about someone who had so many things taken from her for no good reason, she thought the oppressive nature of the society would naturally reveal itself. At the same time, she wanted to write about vanished memories. Initially these were separate ideas, but at some point they became connected, and she decided to create a story with an island setting.

“In the story, the vanishings lead to despair, but as an author I found satisfaction in writing those scenes—for example, when the birds fly off into the distance or when the river is covered with fallen rose petals. These moments of disappearance came to me vividly, and the enjoyment of setting them down helped me keep writing to the end of the book.”

For Ogawa, when starting a novel, images and a sense of place are more important than plot. “If I think about it, I’ve always written stories about people shut in small spaces,” she says. Closed-off locations like hospital rooms, museums, and libraries play a major role in her works. “This may be connected with Anne, but I have this feeling that small spaces are safe. My latest novel is based around the idea that souls cannot be harmed if kept within the confines of a box.”

Published in Japan in 2019, Kobako (Little Boxes) is set in a world in which there are no more children. The narrator lives in a former kindergarten. In the main hall, rows of small glass boxes are filled with items from parents corresponding to how much their children have “grown.” These range from plush toys, candy, and kanji study books to acne products and even alcohol. In the season when the west wind blows, adults wear earrings with small instruments, like harps strung with the children’s hair or wind chimes containing nails and baby teeth, and climb to high ground where the wind is strongest. There they are each moved by their solitary music.

This motif derives from a local tradition Ogawa observed during a 2013 trip to Tōhoku, in which parents dedicate ema (wooden votive tablets) with wedding scenes or glass cases with dolls representing bride and groom to temples, so that their dead children can marry in the afterlife. She also saw glass cases with toys and stationery. In the past, many parents would dedicate ema on behalf of sons who had died in war, while recently they are frequently used for children who have died from accidents, illnesses, or disasters like the 2011 tsunami.

While resistance is a repeated element in The Memory Police, in Little Boxes there is an overwhelming sense of resignation. “When people lose something precious to them through natural means, I think they’re able to accept it. Even the loss of children is part of a natural providence, which includes death. By dedicating various things in the boxes to their children’s souls and communicating with them through the music they hear, they try to live with that providence. It might be that the artificial, political vanishings in the world of The Memory Police create an entirely different sense of loss from that in Little Boxes.” 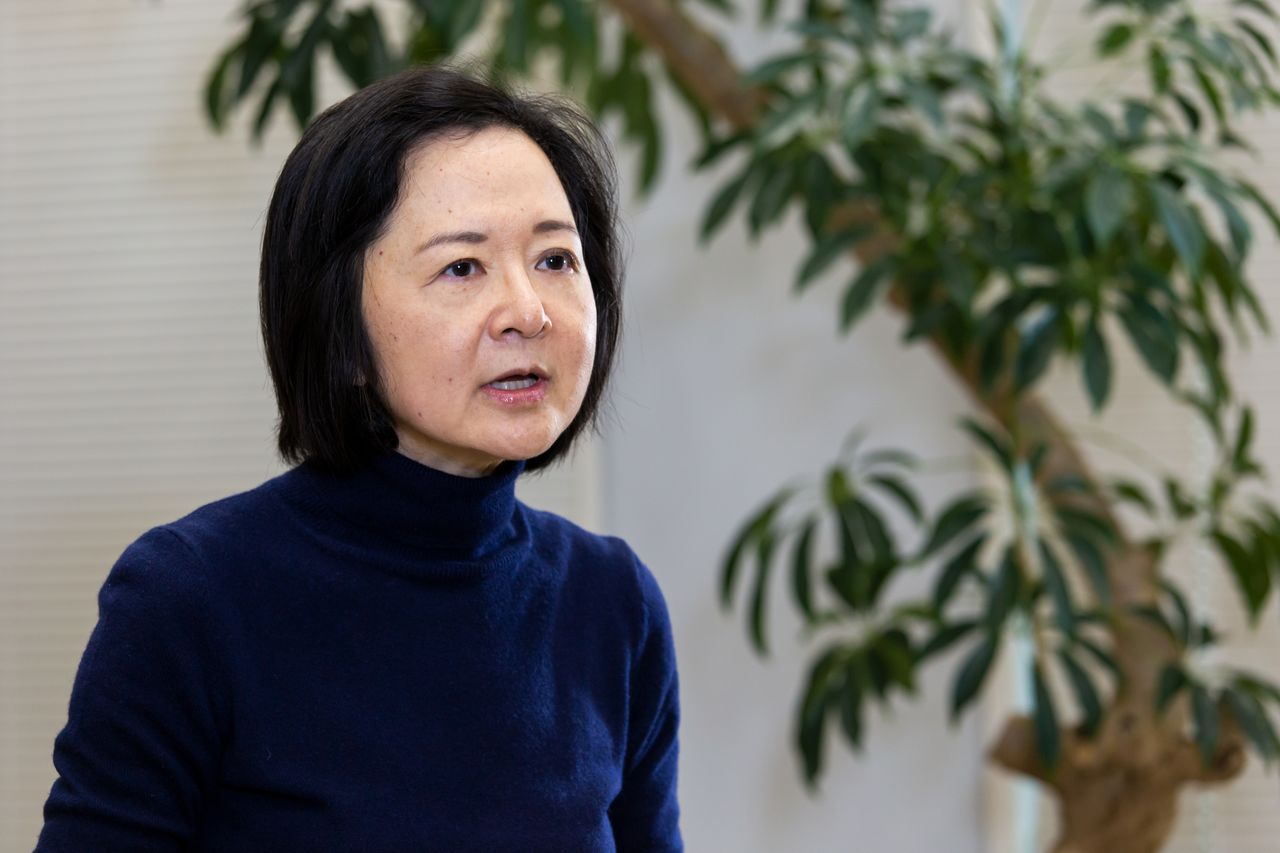 The Memory Police was published in Japanese in 1994. The following year the Great Hanshin-Awaji Earthquake caused more than 6,000 fatalities, and the Aum Shinrikyō cult launched a shocking gas attack on Tokyo subway lines. In 2001, the September 11 terrorist attacks sent global tensions soaring. Then the Great East Japan Earthquake of 2011 killed more than 18,000 people and led to a major nuclear accident at Fukushima Daiichi Nuclear Power Plant. Ogawa says that the past 25 years have shown her the vulnerability of the everyday world, leading her to a belief that death does not mean a breaking off of ties with loved ones. This is why she chose to write about bereaved parents who get through each day by believing that their children continue to grow after they have died.

Writing for the Dead

Ogawa read children’s literature from around the world from her elementary school years onward, and Anne Frank’s diary resonated with her in high school. Finally, she began to read widely in Japanese literature, and at Waseda University, she was influenced by authors like Kanai Mieko, Ōe Kenzaburō, and Murakami Haruki. Then translations by Murakami and the literary scholar Shibata Motoyuki reignited her interest in foreign writing. She says that US author Paul Auster made a particular impact on her. “Auster writes a spoken literature—it feels like he’s written down a story someone told him, rather than creating it himself. Shibata’s translation was also very important, but when I read Moon Palace I thought ‘This is how I’d like to write.’ Like I’m just a medium for transferring a story from the world outside.”

There was a time in her youth, says Ogawa, when she wanted to convey her inner voice, but she recalls a gradual shift in interest to other people. “There were many stories from outside me that I needed to put into words and tell the world. Even without knowing what I was doing, I was deciphering these stories that were buried like fossils—I realized I was able to write naturally in this way.”

Some years after she made her debut as a novelist, she came to feel that all of the characters in her books were “dead” in some sense. “Even if they are greatly shocked or are treated outrageously, they cannot describe it in words. For example, when people can’t express a thought like ‘Why did my child have to die?’ you could say that I’m working to give them words through my story. Naturally, there is also physical death, but these characters are dead in the sense that they have lost their words in a world made up of them.

“When I depict the characters, the role of the narrator is important. If I can’t decide who the narrator is or the viewpoint that person has, the voices of the dead won’t come through to the reader. The narrator of The Memory Police is one of those who has had her memories taken. In Little Boxes, the custodian of the boxes hasn’t lost a child, and this creates distance. I thought having her somewhat removed would allow me to make her a more objective observer.”

Many of Ogawa’s characters exist in quiet corners of society. Her interest in these kinds of people dates backs to her childhood. Her father’s family home in Okayama Prefecture was a church for Konkōkyō, a Shintō sect, and she was born and raised there. “The church was a gathering place for all sorts of people without social standing, in a range of different circumstances. People were considered equal there. In my novels, there are lots of characters who find it hard to live in society due to something they lack. Maybe I was influenced by encountering so many people like that when I was a child. They’ve been swept into a corner, where they seem to live on the verge of being swallowed up by the darkness.”

Little Boxes is about parents who have lost their children, while an earlier novel, Kotori (Little Birds), tells the story of two brothers who can only communicate with birds. In her bestseller Hakase no aishita sūshiki (trans. The Housekeeper and the Professor), the professor is only able to remember the past 80 minutes. Memory is a regular concern for Ogawa in her writing.

“Little Boxes has characters obsessed by memories, but it’s an unavoidable topic when depicting people. You could say that humans are made up of memories. The professor’s limited-term memory brought into relief his humanity and his interactions with the people around him: the housekeeper and her son.” Mathematics, another key element in the story, came into being when Ogawa made a connection between memory disorder and math, she says.

“Next I’d like to write a novel set in a theater.” As well as her enjoyment of plays, Ogawa notes that in the industry a theater is known as a hako, or “box,” and is isolated from the outside world with no movement between the stage and audience. “In the end, I always imagine the same kind of place,” she laughs. “I can write with a sense of reassurance about a space with a clear outline. I can’t write an adventure where characters break out beyond that.” 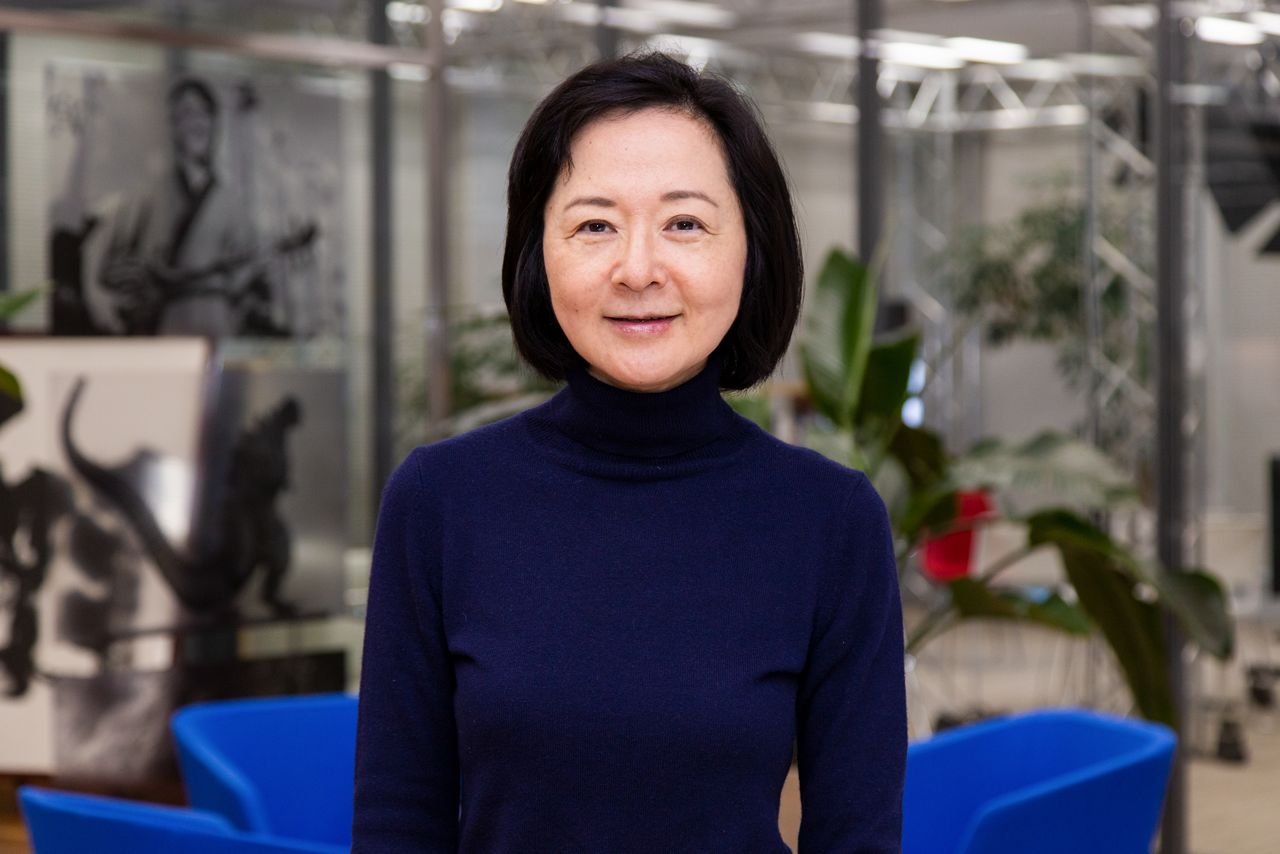 (Originally published in Japanese on March 10, 2020, based on an interview by Itakura Kimie of Nippon.com. Photos by Hashino Yukinori of Nippon.com.)