Culture Lifestyle Mar 26, 2012
In Japan, the name Kondō Fumio is practically synonymous with tempura. Food-lovers from all over the world flock to his Tokyo restaurant, Tempura Kondō, to savor the dishes that have earned the establishment two Michelin stars. We interviewed Kondō about the creativity that has won him his faithful following. 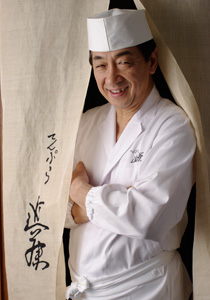 Head chef and proprietor of the Tempura Kondō restaurant in Ginza, Tokyo. Born in Tokyo in 1947. After graduating from high school, he started work at the Hilltop Hotel in Tokyo, where he served his apprenticeship at the Yamanoue Tempura and Japanese Cuisine restaurant. In 1970 he became head chef at the young age of 23. He left to open Tempura Kondō in 1991. He published several books on food and culinary culture co-written with Ikenami Shōtarō, one of Japan’s best-loved authors of historical fiction. 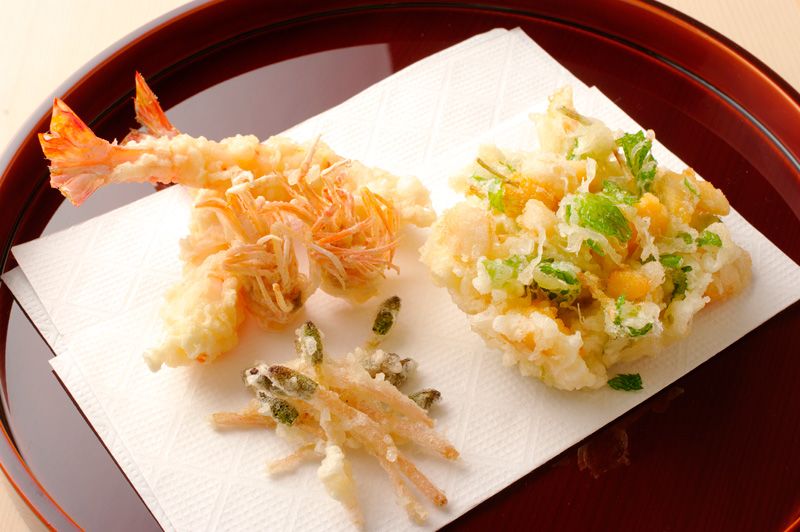 A few of the delicacies served at Tempura Kondō

Like sushi, tempura was originally fast food for the common people, served at outdoor food stalls. Over the years, generations of dedicated chefs tweaked the recipes and refined the techniques, eventually turning tempura into one of the great culinary styles of world cuisine.

Anyone who wants to taste tempura at its best should visit Tempura Kondō, a restaurant in Tokyo’s fashionable Ginza district, where the insatiable drive to try new things of the restaurant’s owner-chef, Kondō Fumio, has lifted tempura to new heights. In his previous job as a hotel chef, Kondō built up the hotel’s reputation as the place to go for top-class tempura. Food-lovers have continued to rave about his skills since he set up on his own at Tempura Kondō, an address that has become virtually synonymous with tempura.

Tempura is a feast for the senses. The sharp sizzle as Kondō slips a piece of batter-coated tempura into the hot oil before your eyes, followed by the explosion of flavor as you lift the piping hot tempura from the plate where it has been carefully set in front of you. We talked to Kondō about his life-long dedication to perfecting the art of tempura.

INTERVIEWER What sets your tempura apart? 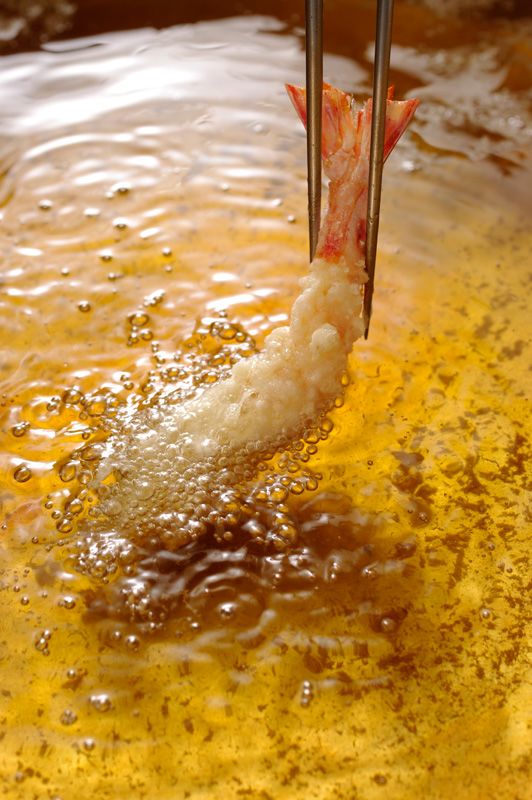 KONDŌ FUMIO It’s extremely light and not oily at all. This is one reason my tempura is popular with my older customers, who tend to dislike oily food. Also, a lot of my customers are women who want to avoid too much oil in their meals. A TV crew visited the restaurant recently, and they measured the calorie content of my dishes for the program they were making. It turned out that my tempura contains only half the calories of tempura cooked at home. The secret is to make sure that the flour batter doesn’t soak up too much oil. That’s the kind of skill that sets a pro apart!

People tend to think of tempura as a fried food, but I look at it as a steamed dish, too. Even after you remove a piece of tempura from the hot oil, the residual heat will continue to steam the ingredient inside the fried batter, helping to bring out its distinctive flavor. Cooking tempura is a two-stage process. It’s important to bear this in mind when you’re frying, or the flavor won’t have much of an impact.

INTERVIEWER That delicate balance really comes across in your dishes. The seafood tempura I tried was crispy on the outside but soft inside. And the vegetable tempura dishes brought out the flavor so well I was amazed that familiar everyday vegetables could taste so good. 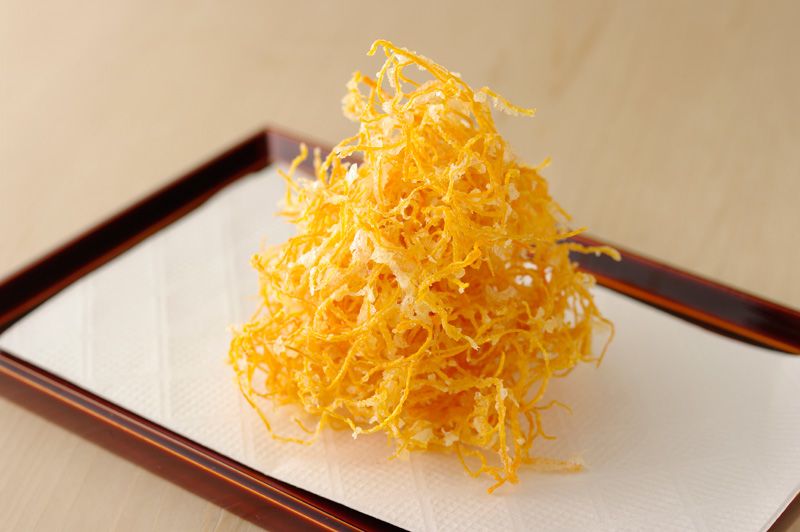 KONDŌ We serve a lot of vegetable tempura at the restaurant. People in Japan used to be a bit skeptical about using vegetables in tempura. You might have a bit of sweet-potato or mushroom tempura as a side dish, but that was about it. Tempura evolved during the Edo period [1603–1868], and the emphasis back then was on frying fresh fish caught offshore close to the city of Edo, today’s Tokyo. Vegetables weren’t used much. This always seemed a bit odd to me. We have so many tasty vegetables in Japan—so I was always eager to try more of them in my tempura dishes.

The approach I take to sweet potatoes has changed over the years. I used to cut the potato into thin round slices for frying, but I was never really satisfied with the flavor that gave me. I knew how great sweet potatoes can taste when they’re roasted, and I was determined to find a way of making sweet-potato tempura that would taste just as good. The result of that quest is the sweet-potato tempura I serve today. 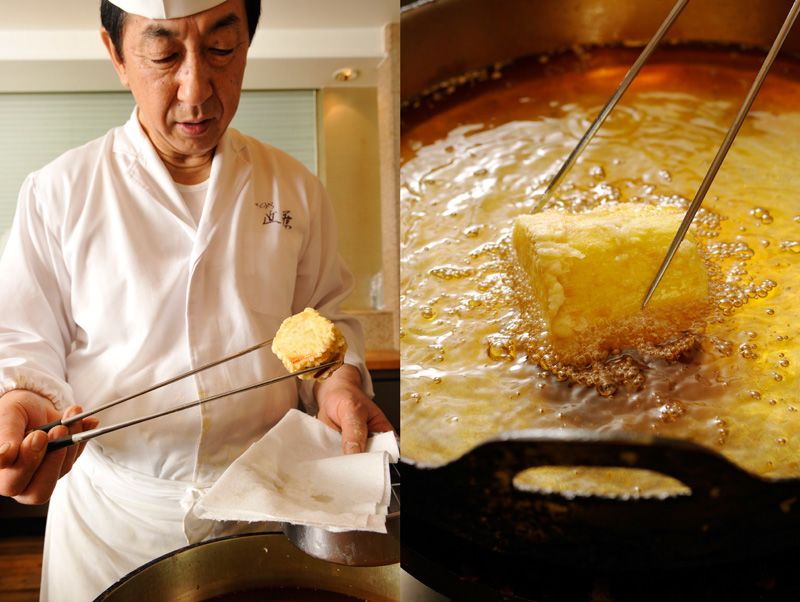 The special fluffy texture is one of the hallmarks of Kondō’s tempura.

I cut a sweet potato into large chunks, well over 10 centimeters in diameter, and fry each one slowly for around 30 minutes. The batter locks in the moisture and sweetness so the tempura doesn’t end up dry and crumbly. Some food critics turned their noses up at this new twist on sweet-potato tempura. They said it was too unorthodox! It’s popular with my customers, though. Bringing out the real flavor of your ingredients is the key to winning over customers.

Normal customers aren’t interested in preconceived notions about how a dish should be prepared. The only thing that matters for them is flavor—whether something tastes good or not. In this sense, cooking is quite a straightforward business.

INTERVIEWER You’re not particularly bothered by criticism, then? 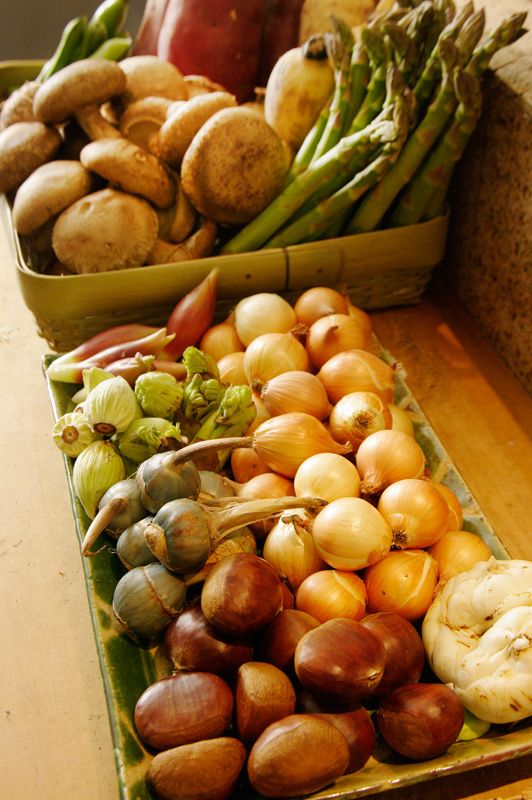 Vegetables ready for Kondō to sample. He visits each of his suppliers to taste their vegetables in person.

KONDŌ I’m trying to do something that other chefs can’t match. Once you know what you are trying to achieve, it’s easier to keep going until you reach your goal. My whole focus is on exploring the possibilities of tempura and introducing my customers to the range of flavors that this style of cooking can unlock.

Cooking is all about winning over your customers—not gaining the approval of food critics. It’s nice to have two Michelin stars, but I’m not about to make changes just to get another star. What matters to me is providing customers with the best possible tempura.

I also have quite high standards when it comes to the farmers who supply our vegetables. I insist on the best of the best. In the case of pumpkins, I ask the farmers to reduce the number of pumpkins on each vine as much as possible. So if a vine usually has five pumpkins, I’ll get them to limit it to three. The fewer pumpkins on each vine, the more nutrients each pumpkin receives. This has a dramatic effect on the flavor.

One reason that Kondō’s delicious tempura has become so well known is thanks to the late historical novelist and food connoisseur Ikenami Shōtarō. Even today, his famous essay in praise of Kondō’s cuisine continues to draw fans to Tempura Kondō for the first time. The support of this popular writer was instrumental to the restaurant’s success. More than just a customer, Ikenami became a great “life teacher” to Kondō, who always refers to the writer as “Ikenami-sensei” to show his respect.

INTERVIEWER You serve all kinds of creative tempura dishes that can’t be found in other restaurants. What’s the source of that creativity? 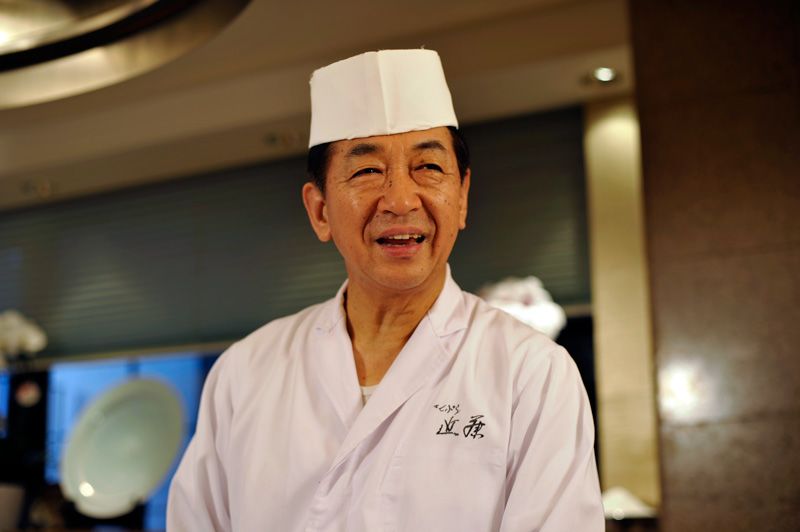 KONDŌ Basically, I think my tempura reflects what I’m like as a person. I took a job as a hotel chef straight out of high school. Six months into the job, I was put in charge of tempura dishes. There was no one above me on the staff to show me the ropes, so I bought a bunch of books and quietly tried out different things on my own. That’s how I built up my skills as a tempura chef. Once I got to a certain level, I started to experiment with all sorts of new ideas. Not having anyone telling me what to do helped me become the chef I am today.

But my customers are the ones who really fostered my development; customers like Ikenami-sensei. It’s the drive to keep my customers satisfied that has enabled me to come this far.

INTERVIEWER What did you learn from Ikenami when he was a regular customer?

KONDŌ Quite a lot of things. But what really sticks in my mind is how he once told me: “If you ever get big-headed, it’s all over.” He told me if I let the praise go to my head, I wouldn’t be able to develop any further. “Stay humble”—that was his basic advice to me. It’s still etched in my heart. And to make sure I never forget his advice, the name of the restaurant is embroidered in his calligraphy into the uniform I wear every day at work.

I always try to remember what he said. I want to make sure that my tempura is always up to the high standards that Ikenami-sensei liked. I owe it to him to maintain the trust that he helped me to build up among my customers.

INTERVIEWER Even though Ikenami died over 20 years ago, you still send osechi ryōri [traditional New Year dishes] to his home every year. That seems to reflect how important his advice has been to you. 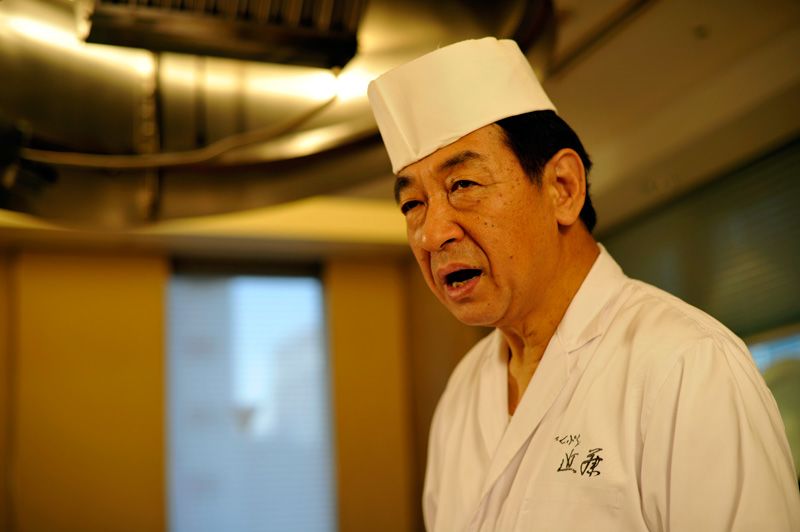 KONDŌ While Ikenami-sensei was alive, I was continually on the receiving end of his kindness. It is only since he passed away that I’ve finally been able to repay his kindness. Once you repay a loan that’s the end of it, but that’s not the case with a personal favor. Kindness is not something that can be repaid in such a matter-of-fact way. So I’m still in the process of showing my gratitude. And I’ll continue to do so for the rest of my life.

INTERVIEWER Has he continued to have a big influence on you even since his death?

KONDŌ I opened the restaurant the year after he died. Actually, he had predicted when I would open up my own place. Ikenami-sensei was quite into ki-gaku fortune telling, and I remember he said to me, “This will be the year that you make the big move.” I didn’t think much about it at the time, but his prediction turned out to be true. [Laughs]

Ikenami-sensei helped me out in so many ways over the years. Even though he had passed away by the time I branched out on my own, I’m still careful to keep things in good shape so that he wouldn’t be disappointed if he ever happened to come through the door. That’s one reason I chose Ginza. I figured if he ever does show up again, this would be certainly the place!

The term kizuna [bonds; ties] expresses a Japanese emphasis on the almost spiritual importance of close personal connections. I had that sort of kizuna connection with Ikenami-sensei, and now my restaurant is serving to forge ties between my customers and the farmers who grow the vegetables we use. As I carry out my work on a daily basis, my hope is that these personal connections will bring a smile to the face of everyone involved.

INTERVIEWER How would you sum up what tempura means to you?

KONDŌ Tempura, for me, is the pinnacle of cuisine. In the restaurant where I used to work, tempura was just one of several types of Japanese dishes served. That was when I realized how special tempura is as a way of cooking. It really brings out the flavors of the ingredients two or three times more than boiling or grilling the same ingredients. I wouldn’t bother frying the ingredients unless I was confident that the end result will taste better that way than prepared any other way. That’s the belief that has kept me cooking tempura dishes to this day. 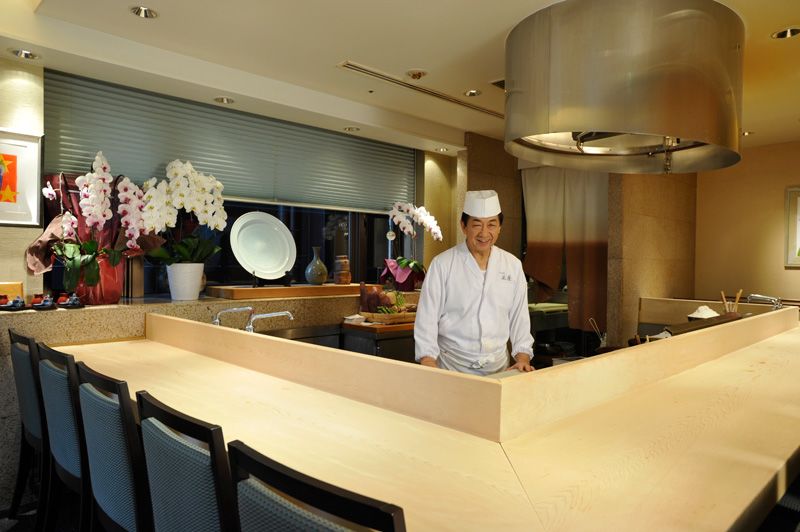