Culture Jul 4, 2013
Mount Fuji was recently registered as a UNESCO World Heritage Site. Of course, all Japanese people are familiar with their country’s highest mountain—but one man has spent his life getting to know it better than anyone else. We talked to photographer Ōyama Yukio about nearly 40 years spent in pursuit of the mountain’s deepest secrets.

Photographer. Born in 1952. Has been photographing Mount Fuji since 1976. In 1985 moved to the village of Oshino in Yamanashi Prefecture, at the foot of Mount Fuji. Based since 1990 in the Fujigane section of Fujikawaguchiko, where he enjoys 24-hour views of Mount Fuji from his large living room window. Published works include Daichi no Fujisan (Mount Fuji from Ground Level). Received the Lifetime Achievement Award from the Photographic Society of Japan in 2011.

We have all leafed through a photography book in a bookstore. Most of the time, we put the volume down and think little more of it. For Ōyama Yukio, this simple act had consequences that changed his life. The book in question contained pictures of Mount Fuji that were totally different from anything he had seen before—far removed from the distant views of Fuji he had seen during his childhood years in Odawara and Yokohama.

At the time, Ōyama was helping out with the family construction business and practicing amateur photography in his spare time. Most of his pictures were of railroads. An entirely self-taught amateur, Ōyama had no intention of becoming a full-time photographer. From the moment he saw that book on Mount Fuji, though, Ōyama made up his mind to devote every moment of his free time to capturing Japan’s iconic mountain in photographs.

He was 24. He climbed all the mountains around Fuji to compare the different views of their taller neighbor; he walked through the forests that cover Fuji’s slopes; he even chartered a Cessna aircraft to look down on the mountain from the skies. With each passing day, Fuji occupied his thoughts more and more. During his twenties, Ōyama began to believe that he was not simply Fuji’s photographer, but its servant. After eight years, he felt the time was right for an exhibition of his work. 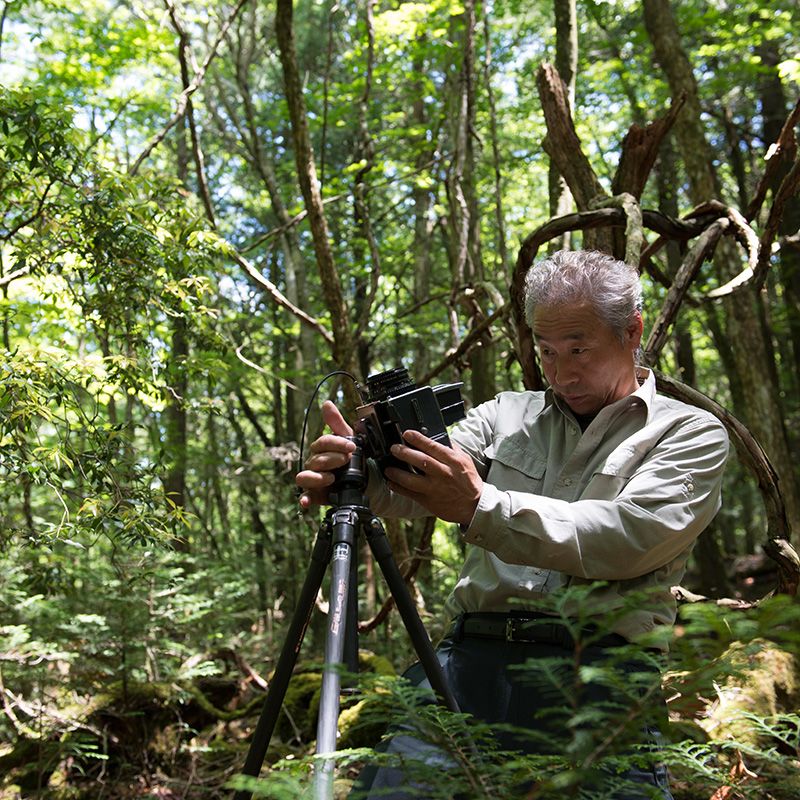 “Back then there weren’t any other photographers who focused exclusively on Fuji,” Ōyama says. “The other mountain photographers used to make fun of me. They thought I was wasting my time on a mountain that had already been photographed countless times. I think Fuji’s image was just too powerful. The name of the mountain conjured up an image in people’s minds of a noble, unchanging figure, almost smiling as it stands still and proud. It never occurred to people to get beyond that image. I was perhaps the first to get stuck in and try to capture the reality of the mountain.

“Everyone knows Mount Fuji, but that very ubiquity produces a blind spot—no one knows its true form. That’s why I wanted to take photographs that broke through the fixed notions and stereotypes. Some of the people who came to my exhibition have been living in the foothills of Mount Fuji for generations. They told me they’d never seen the mountain depicted in my photos before. When I heard that, I was so happy I felt like crying.”

A Living, Breathing Sea of Trees

Ōyama’s novel perspective met with a hugely positive response, opening the door to another exhibition and the offer to publish a collection of his photographs. The following year he moved from Yokohama to Oshinomura in Yamanashi Prefecture. He decided to live at the foot of Mount Fuji and devote himself to his photography. Six years later, at the age of 38, he moved even closer, building a house for himself and his family in Fujigane by the shores of Kawaguchiko, a lake near the peak. Using this house as a base, Ōyama lodged himself right in the bosom of his beloved mountain.

At 41, he began to concentrate on photographing Aokigahara Forest, which spreads around the foot of the mountain and is often called the jukai, or “sea of trees.” The beginnings of this forest can be traced back 1,200 years, to a lateral eruption on the northwest face of Fuji that spewed forth a large swell of lava. Today’s Motosuko, Shōjiko, and Saiko, previously one body of water, were divided into three lakes by this tide of molten rock. A new expanse of land was created where the lava came to rest. Trees sprouted in the volcanic rock. Over the centuries, they grew and multiplied to form the vast forest that exists today. However, the trees look very different from those in other forests. The roots stretch in all directions across the surface of the cooled lava. Many think this gives the forest an eerie look; the forest has become infamous for its supposed ability to befuddle a wanderer’s sense of direction and render compasses useless. 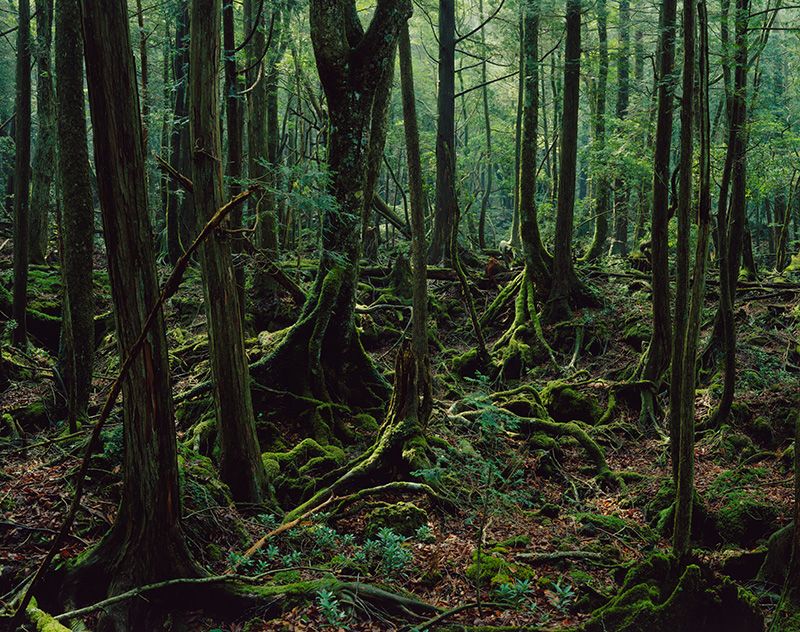 “Television dramas set in the forest gave the area this malevolent image in the public mind. That image of the forest as a suicide spot—a place where people came to die—totally blinded people to what really makes it so special.

“When you actually walk through the forest, the reality is totally different from the popular image. They call it the ‘sea of trees,’ and sure enough, on a rainy or misty day, it feels like you’re walking on the seabed. When I’m inside that thick, verdant atmosphere, I really feel that the place is overflowing with an indomitable life force. The trees spread their roots across the thin layer of earth that has built up on the cooled lava; the trunks and branches of each tree seem to scrabble for space. You can really feel the trees fighting desperately for life.”

I Can Hear the Mountain Calling 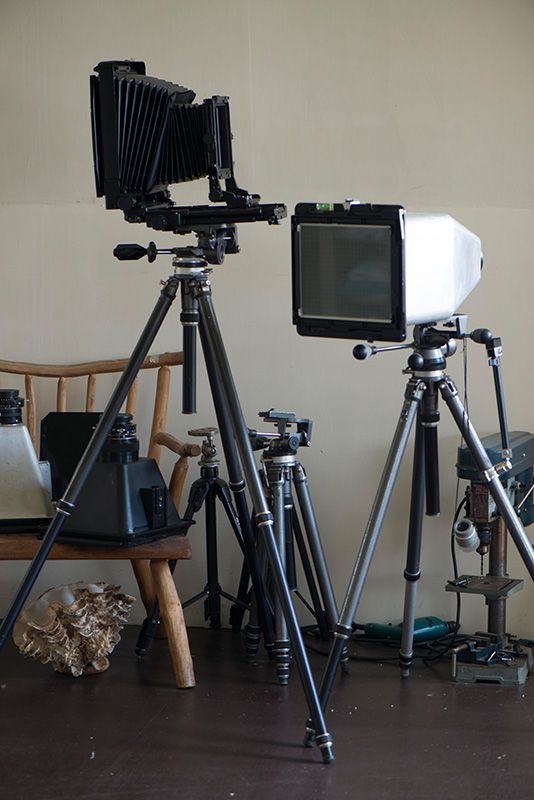 When he was 51, Ōyama released his photo collection Fuji jukai (Fuji: The Sea of Trees). The photographs cover 10 years and reveal the untold story of this famous forest. Ōyama says that his style of photography is closely related to shugendō—a Japanese spiritual tradition incorporating Buddhist and Shintō ideas. Central to the tradition is the practice of ascetic mountain dwelling. Each time he enters the forest carrying his tripod and camera, Ōyama takes just eight photographs. In the course of his ongoing dialogue with the mountain, he presses the shutter only when something truly remarkable catches his eye.

“Often when I’m walking through the forest I feel as if I’m becoming one with my surroundings. As I clear my mind and focus on sharpening my senses, I almost feel as though I can sense the spirits of the forest. The Sea of Trees is full of a kind of spiritual atmosphere.

“As I find go deeper into the forest, I can feel Mount Fuji seeming to come closer to me. When I’m alone in the deepest parts, I sometimes seem to hear voices calling out to me from somewhere. ‘Ōyama!’ they seem to say. ‘Hurry over to our world. . .’ It’s as though I’ve slipped into another world. The photographs I take at these moments often show scenery that even I find hard to believe.”

Now in his sixties, Ōyama has spent almost 40 years walking on Mount Fuji. What does the mountain’s recent registration as a World Heritage Site mean to him?

“Mount Fuji is not just a beautiful mountain; it is a sacred place where Japan’s ancient spirits dwell. It is here that the origins of Japan’s animism lie. I hope that visitors from abroad can feel this spiritual aura when they come to Fuji. There’s nowhere quite like this Sea of Trees anywhere else. I can’t help feeling that the mountain contains undiscovered doors to another world.”

It is hoped that the World Heritage Site registration will bring more visitors to discover Fuji’s charms from around the world. You can be sure that this will be a delight for Ōyama, who has spent his life trying to find the hidden secrets of this special place. 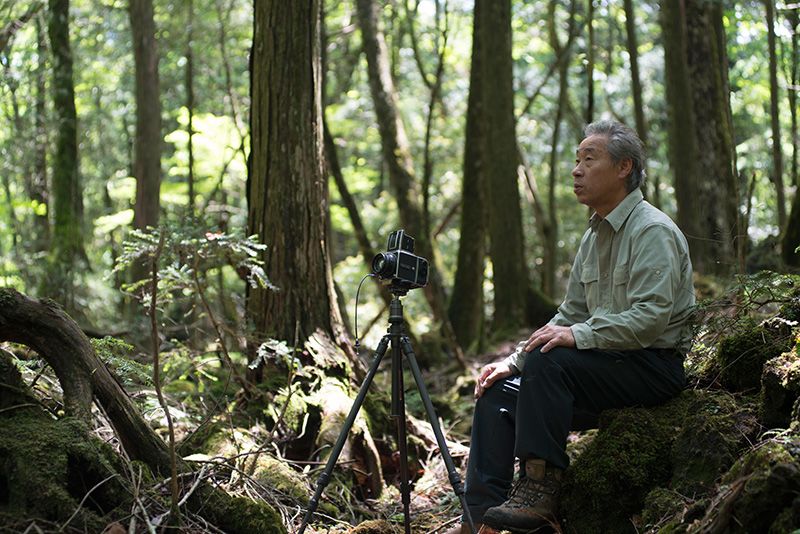 (Interview and text by Kondō Hisashi, director of the Nippon Communications Foundation. Photographs by Kodera Kei.)