Architecture for All: An Interview with Pritzker Prize Winner Ban Shigeru

Society Culture Nov 21, 2014
In 2014, Ban Shigeru received the Pritzker Prize, one of the most prestigious honors in the field of architecture. Ban has won international kudos for his temporary but sturdy structures built from paper tubes to shelter disaster victims and refugees. In an interview with Nippon.com, Ban talks about his latest project and shares his artistic philosophy. 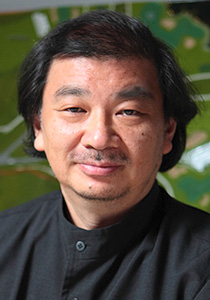 Architect and professor at Kyoto University of Art and Design. Born in Tokyo in 1957. Graduated from Cooper Union with a degree in architecture. Worked under Isozaki Arata before establishing his own studio. In 1995, founded the disaster relief organization Voluntary Architects’ Network. Has worked as consultant to the Office of the United Nations High Commissioner for Refugees, professor of environment and information studies at Keiō University, and visiting professor at Harvard Graduate School of Design and Cornell University. Major works include Curtain Wall House in Tokyo, paper log houses used as shelters after the Great Hanshin-Awaji Earthquake, a paper church in Kobe, the Japan Pavilion at Hannover Expo 2000, the Nicolas G. Hayek Center in Tokyo, the Centre Pompidou-Metz, and the Cardboard Cathedral in Christchurch, New Zealand. Honors include the Gold Medal from the French Academy of Architecture, the Arnold W. Brunner Memorial Prize in Architecture, the Architectural Institute of Japan Award, an honorary doctorate degree from Technische Universität München, the French National Order of Merit (Officer Grade), the Auguste Perret Prize, the Minister of Culture Award for Fine Arts, the French Order of Arts and Letters (Commander Grade), and the Pritzker Architecture Prize.

BAN SHIGERU  Just because I’ve won a major award, it’s not really going to change much. I don’t want to be swayed by such things. Even if I get some big offers, I’ve no plans to expand my office, and I don’t want to accept such offers too readily. I want to keep working at the same small scale I’ve been working at until now.

BAN  Although it's an art museum, I didn’t want it to be a place for art lovers only, or a “black box” that hides what’s happening inside. I wanted to make it a place that’s welcoming to everyone, where people who aren’t necessarily art fans can enjoy themselves, where one can hold all kinds of events. A public facility shouldn’t be restricted to one particular group of people, in my view. With that in mind, I opted to go with an open design. 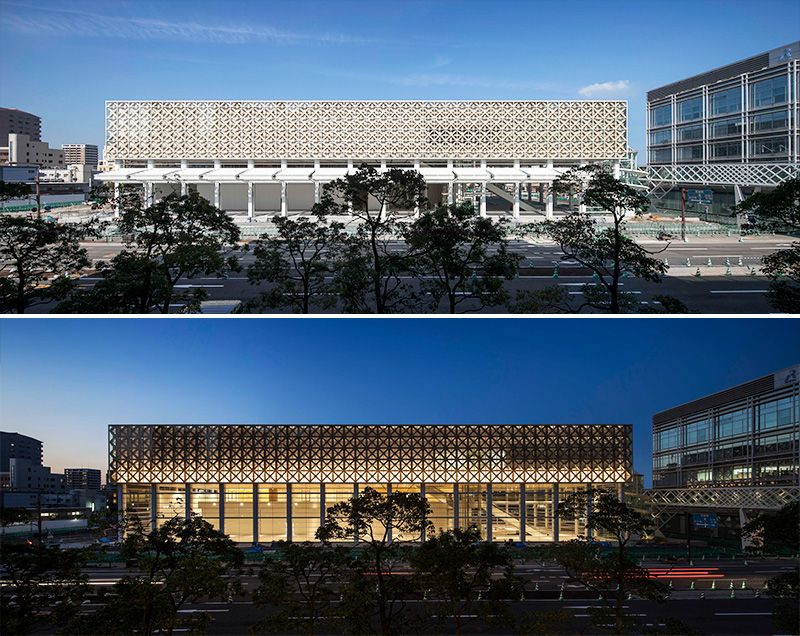 Oita Prefectural Art Museum in the daytime with horizontally folding doors open (above) and at night with folding doors closed (below). (© Hiroyuki Hirai)

For the 2010 Centre Pompidou-Metz in France, a branch of the Centre Georges Pompidou, I aimed to make the most of Metz’s historic townscape and emphasize those surroundings in my design, but in Oita I took the opposite approach. The open structure without barriers makes the interior visible from outside and welcoming to visitors. It’s so much easier for people to enter a building with an open design than one where they have to push through a door.

In addition to being open, the structure is flexible enough to hold events other than art exhibitions. Passers-by might see something interesting going on inside and decide to drop in. The typical art museum is like a black box in that you don’t know what’s inside until you pay the entrance fee and go in. I wanted to do something different and design a facility that would allow art and events to spill out into the community.

INTERVIEWER  There are also several buildings designed by your mentor, Isozaki Arata, in Oita Prefecture.

BAN  I only worked in Isozaki's studio for around a year, but I’ve visited his architectural sites in Oita many times, beginning when I was a young man, and it's a kind of holy site for me. It’s just a coincidence that I won the bid for the Oita museum, but as a one-time student of Isozaki, I’m really happy to have the opportunity to design a building there.

INTERVIEWER  What are your views on the current state of Japanese architecture?

BAN  Japan is no longer open to experimentation. Construction regulations have been reformed for the worse, especially since the 2005 scandal over falsification of structural data by architect Aneha Hidetsugu. I had already received ministerial approval under Article 38 of the Building Standards Act for my paper tube structures, but now that’s invalid. The rules for fire resistance of wooden structures are ridiculously strict. These kinds of regulations are stifling development.

I travel between Paris and Tokyo every other week now. Tokyo is clean, but it’s not beautiful like Paris. Paris is beautiful but messy. As long as the individual buildings are beautifully designed, the city will shine, even if it doesn’t follow a rigid plan. It’s an architect’s duty to build beautiful buildings.

INTERVIEWER  Along with your monumental projects for museums and other public buildings, you’re best known for paper tube structures creatively adapted to poor living environments, such as areas hit by major disasters and refugee camps. This goes back to the shelter designs you proposed for Rwandan refugee camps in the 1990s. What’s your approach to this kind of work?

BAN  My activities in Rwanda began in 1994. In 1995, in the wake of the Great Hanshin-Awaji Earthquake, I launched an NGO in Japan and started working in Kobe. The organization has pursued initiatives in disaster areas almost every year since then.

After I became an architect, it seemed to me that people in my profession did too little to benefit society. After all, most of our work is for the privileged class. Historically, the job of the architect was to turn the invisible money and power of the privileged into something that everyone could see. That’s why rich people hired architects and built beautiful buildings. The job has changed very little in that sense, even though the membership of the privileged class has gradually changed.

To be sure, there’s a need for magnificent public buildings and monuments that can become part of the urban heritage. But when I had the opportunity to use my experience and knowledge to design buildings for ordinary people and people who had lost their homes in disasters instead of members of the privileged class, it got me thinking, and I started volunteering my services to support disaster relief efforts.

As I said, this doesn’t mean that I think architecture for the privileged is bad. I think monumental architecture is also important, so in my professional life I’m constantly considering how best to balance those two sides of my work.

(Originally published in Japanese on November 5, 2014. Translated from an interview by Harano Jōji, representative director of the Nippon Communications Foundation.)