Politics Society May 16, 2016
Doi Kanae opened Human Rights Watch’s first office in Asia seven years ago. Today she is actively engaged in drawing attention to the plight of children who are institutionalized because they are unable to live with their parents and promoting their right to receive family-based care. 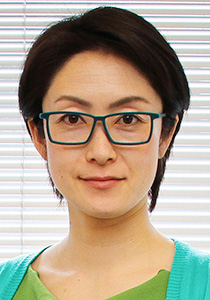 Japan Director, Human Rights Watch. Born in Kanagawa Prefecture in 1975. Passed the national bar exam in 1996 while still a student at the University of Tokyo’s Faculty of Law. Joined the NGO Peace Boat during her fourth year at university as a legal volunteer to help newly independent Eritrea draft legislation. Worked as a practicing attorney from 2000 to March 2016 in Japan. After serving as a defense counsel for Afghan refugees, received a master’s degree in international law from the New York University School of Law and qualified to practice law in New York State. Was a fellow at the New York headquarters of Human Rights Watch in 2005–6, and opened the Japan Office in 2009 to research and publish policy proposals on human rights violations in Asia and to help protect human rights in countries around the world.

The World of Children “Without Dreams” 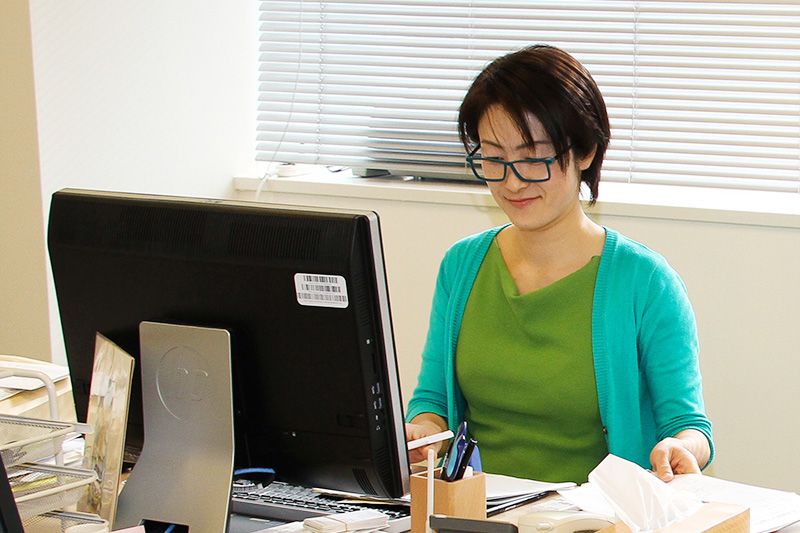 Working in the Tokyo office of Human Rights Watch.

On April 4 this year, 20 municipalities and 13 private-sector organizations jointly established a council to promote adoption, foster care, and other forms of family-based upbringing for children unable to live at home due to parental abuse, illness, or neglect. One leading force behind this initiative to reduce the number of children being raised in institutions was Doi Kanae, Japan director of Human Rights Watch, the international nongovernmental organization conducting advocacy on human rights issues.

With its headquarters in New York, HRW has approximately 400 staff members working at offices in 90 countries; their activities are coordinated internationally in issuing recommendations to pressure governments into addressing human rights violations. 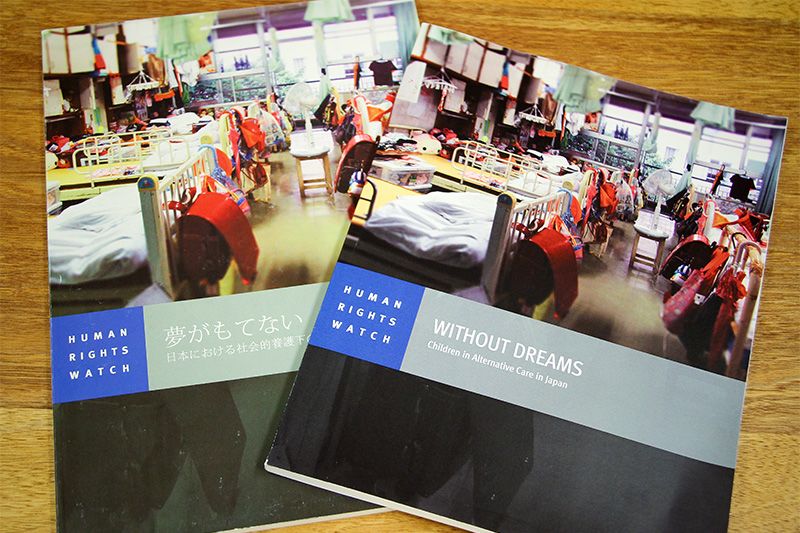 Without Dreams was published in both English and Japanese.

The HRW office in Tokyo was established in April 2009 as the first office in Asia. Its first self-initiated report, titled Without Dreams, was issued in May 2014 and details the conditions faced by Japanese children in alternative care.

“The initial Human Rights Watch report to focus on Japan was in 1995, which detailed human rights violations against prisoners,” notes Doi. “And in 2000, we issued a report on human trafficking in Japan. The latest document thus represents the first in more than a decade.”

There are two main reasons behind the decision to initiate the latest research project, Doi says. “The first was the gravity of the problem. The system of institutional care is one of the few areas in which human rights standards are appallingly low in Japan. Many industrial countries have been shifting to family-based care, but nearly 90 percent of children requiring alternative care in Japan are institutionalized.”

Alternative care is the means by which children who cannot live with their families are protected and raised by society. Most of the approximately 40,000 children requiring such care are placed in childcare or infant-care institutions.

“The second reason,” Doi notes, “was the low level of social awareness and interest. Many people are pained by the sight of young children being brought up in institutions, but no one points out that this situation is in violation of international treaties, nor does anyone take the government to task for allowing this state of affairs to continue.

“The UN Convention on the Rights of the Child,” she added, “stipulates that a child deprived of his or her family environment and in need of alternative care should be placed in an institution only if necessary. Measures to promote foster and adoptive care are severely lacking in Japan, and this has prompted the Committee on the Rights of the Child to issue recommendations regarding child rights violations. This in itself is not well known.”

Parental Rights Supersede Those of the Child

Research for Without Dreams was conducted through interviews over a two-year period between December 2011 and February 2014. A study was also made of conditions of children orphaned by the March 2011 Great East Japan Earthquake. Most of the 241 orphans (as of November 2012) of the earthquake and tsunami had been taken in by relatives and were receiving financial support from governmental and nongovernmental sources.

By contrast, very little attention was being paid to the bleak realities facing the 40,000 children who continue to be cared for in institutions across the country. 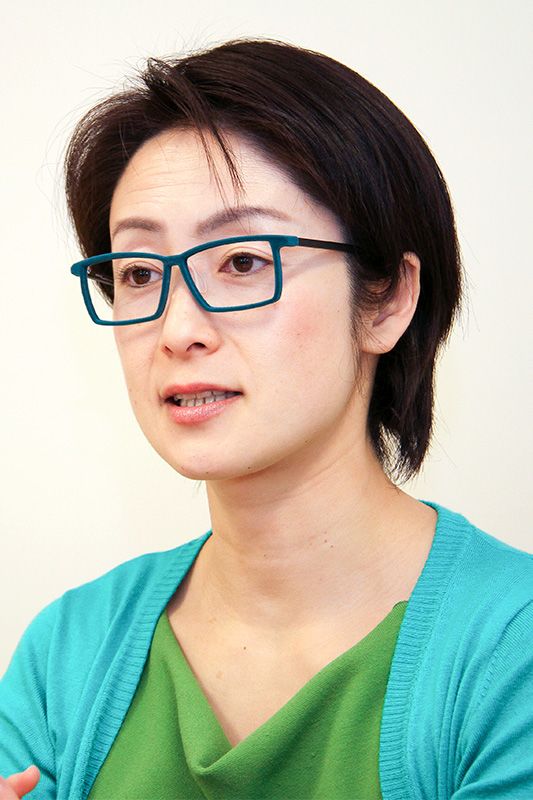 “No one raises an objection when a parent decides to send a child to an institution.”

“Promoting adoption doesn’t cost the government much money,” Doi says, “and it’s many times cheaper to support foster parents than to keep these children under institutional care, when you consider personnel and other expenses. Children in institutions have a high dropout rate, moreover, and are thought more likely to wind up becoming homeless. It’s clear that promoting institutional care doesn’t make sense, and yet this continued for decades after the war.”

Research for the report revealed three reasons for the phenomenon that had hitherto been largely hidden from public view. Doi faults legal institutions, industry interests, and the government for a system that deprives children of their right to family-based care.

“The first reason,” she notes, “is that the interests of parents are given priority over those of children. Many parents, even though they’re incapable of raising children, don’t want their kids to become attached to someone else. And when a parent decides to send a child to an institution, no one can object. This constitutes an abuse of parental powers that is very difficult to prevent under Japan’s current legal system.

“The second reason is the lobbying efforts of operators of childcare institutions, which are reliant on government subsidies. If there were no children living in a facility, the operators wouldn’t quality for grants, and they would be driven out of business. They’re placing their own survival ahead of the happiness of the children living there.

“And the third reason is the neglect of government officials and politicians. Compared to the hassle of matching a child with a foster parent and conducting follow-up, sending a child to an institution is simple; if things don’t work out, blame can be placed on the institution. Another aspect of government neglect is that child guidance centers are severely short-staffed.”

In an effort to publicize these findings, Doi has been waging an advocacy campaign over the past two years, meeting with officials at the Ministry of Health, Labor, and Welfare and with politicians. She has also actively appeared in the media in an attempt to galvanize public opinion.

These efforts, which have been aimed at amending the Child Welfare Act, have won over Health, Labor, and Welfare Minister Shiozaki Yasuhisa, who has become a strong advocate of family-based care. Under the minister’s initiative, the Abe Shinzō administration adopted a cabinet decision in late March to revise the Child Welfare Act, and a bill explicitly identifying the rights of children for the first time, in accordance with the UN Convention on the Rights of the Child, was submitted to the Diet. The amendment also stipulates that when children cannot live with their biological parents they shall, as a rule, be provided with family-based care through adoption or foster arrangements. Only when such alternative care is inappropriate will children be entrusted to institutions, but even in such cases, every effort will be made to provide a home-like setting. These provisions, should they become law, will turn Japan’s institution-based alternative care system on its head. Even so, Doi believes that she will need to continue waging her campaign to ensure that loopholes are not introduced into the legislation.

“The failure to recognize the rights of children put Japan three decades behind other countries,” Doi comments. “The bill will finally bring Japan up to date.”

Doi is particularly adamant about closing all infant-care institutions, for children aged up to around two. “Such facilities have been shut down in most other countries long ago.” Doi says. “The fact that they still exist in Japan is a source of international amazement. The operators of these institutions will resist fiercely, and there is a lingering misunderstanding that such facilities actually serve a positive purpose. Newborns can’t speak for themselves, so it’s up to people with a conscience to inform the general public of what’s really going on. The buildings, personnel, and other resources of infant-care institutions could be put to better use if they were applied to providing much-needed support and assistance for family-based care.”

The Tokyo office of Human Rights Watch operates with six full-time staff members, in addition to a number of volunteers and interns. Each staff member belongs to a section within HRW as a whole, reporting, as it were, to “a boss outside Japan,” Doi says, rather than to the local director. 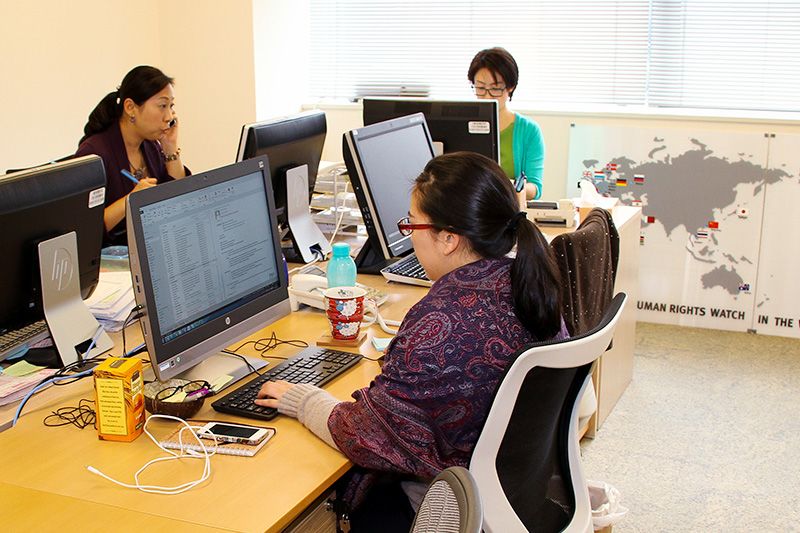 Tokyo office staff members work closely with colleagues from around the world.

Doi’s chief responsibility is to exert “outside pressure,” such as convincing the foreign ministry to take a stance against human rights violations in other countries. Prime Minister Abe’s values-oriented diplomacy and emphasis on the rule of law would appear to be in line with HRW’s concerns. “There’s a lot of talk, but unfortunately not much substance,” Doi laments. “In terms of the administration’s foreign policy priorities, protecting freedom and human rights is still very low.”

Because of its status as a mature democracy, Japan is rarely criticized for its domestic policies, including the emphasis on institutional care for children unable to live with their parents. This has convinced Doi of the need to press for change from within by appealing to public opinion. 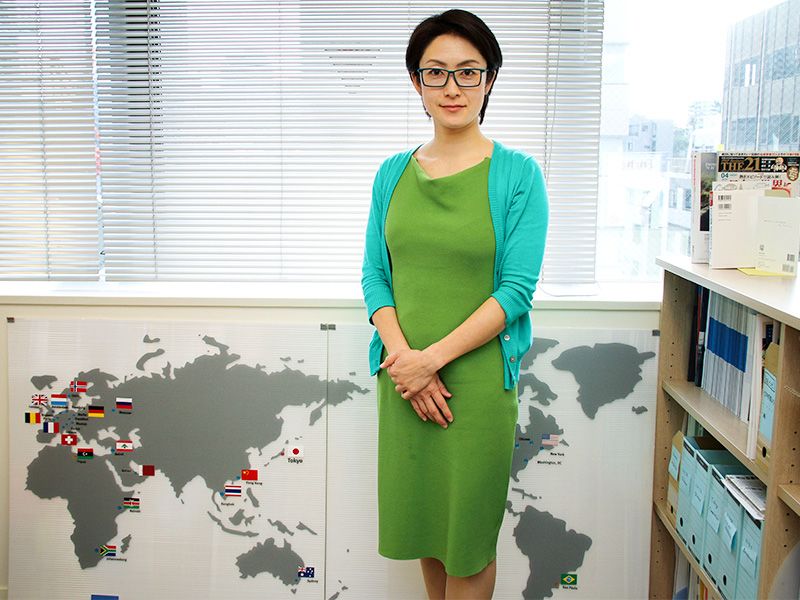 Promoting a Culture of Giving

In addition to meeting with politicians and bureaucrats and reaching out to the public through the media and various gatherings, she also directs her energies to fundraising.

Human Rights Watch does not accept any government funding and is operated solely with private and institutional donations. Its biggest source of revenue is an annual charity dinner in New York. Doi recalls initially being overwhelmed by the massive scale of these donor events, attendance at which can cost from around $1,000 to $100,000. She dreamed of organizing such a gala dinner in Japan, where the custom of large-scale donations has not yet taken root. She began with small, pilot events and has gradually been expanding their scale.

The March 2011 earthquake and tsunami prompted many more people and organizations to start giving, encouraged by new tax breaks and other institutional changes. Tickets to the April 2016 charity dinner in Tokyo were quickly sold out.

“I think Japan is about the only country in Asia where fundraising activities for human rights causes have been successful. In China, for example, Human Rights Watch staff members have to be very careful even when they’re just walking on the street. Naturally, HRW can’t open an office there, and for the most part we have to operate underground. In other countries, HRW personnel are openly threatened. At least in Japan, which is still one of the few democracies in Asia, you can scream all you want about human rights abuses. You might not get much attention, but no one will attack you, either.”

Raising public awareness of the issues surrounding institutional care is a daunting task, to be sure, but Doi finds meaning in rising to the challenge.

“Our job is to prompt the government to take action, and the only tool we have is communication. We conduct fact-finding studies and present our policy recommendations. And we have to make an impact on public opinion in order to bring about positive social change. This isn’t easy, especially when there are interests that are resisting such change. But I find the task of pooling the knowledge, strategies, and information we have on hand to persuade the government to address issues that had appeared impossible to change to be truly interesting and highly rewarding.”

(Originally written in Japanese by Itakura Kimie of Nippon.com and published on April 25, 2016. Photos by Ōtani Kiyohide.)