Society May 9, 2016
Tsukamoto Konami, Japan's first female certified tree doctor, has treated and transplanted hundreds of giant trees, including 130-year-old wisteria. We visited Tsukamoto at Hamamatsu Flower Park, where she is reviving the garden and helping isolated youngsters adjust to society. 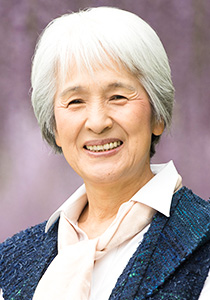 Born in Iwata, Shizuoka Prefecture in 1949, she now lives in Hamamatsu in the same prefecture. Japan first female certified tree doctor and a first-class landscape architectural management engineer. Rose to fame in 1996 after transplanting four 130-year-old wisteria trees to Ashikaga Flower Park. Became chair of Hamamatsu Flower Park in April 2013. Is also chair of Hamamatsu Flowers and Greenery Promotion Association and looks after trees nationwide. Married to a creator of Japanese gardens, and has three children and six grandchildren.

The delicate purple and white cascades of wisteria stir in the spring breeze, their fragrance hanging in the air. Seated on a bench beneath a trellis that has been cleverly constructed to allow these blooms to show off their full splendor, Tsukamoto Konami smiles and says this is the best time of the year to be in a Japanese garden.

“Late April to early May is my favorite time of year,” she says. “The new green shoots are emerging after the winter, and the wisteria is in bloom.”

Elsewhere in the garden, the tulips are a riot of reds, yellows, and pinks. The rust-red leaves of Japanese maples and the deep greens of pine trees form a backdrop for the whites, purples, and blues of myriad seasonal flowers—all testimony to the hard work Tsukamoto has put into the Hamamatsu Flower Park, located near the foot of Mount Fuji in central Japan.

For Tsukamoto, now 66, it is a labor of love with roots reaching back to her childhood.

“I was a real tomboy when I was growing up in Shizuoka Prefecture, always doing sports or climbing trees,” she says. “I was very good at climbing trees. My father loved trees, and my husband, who I married when I was 22, was a specialist Japanese-style gardener, so in some ways it was almost inevitable that I would end up in this field of work.”

The Japanese government introduced a professional credentialing system for tree doctors in 1991. The following year, Tsukamoto became the first woman to earn the title after a grueling test of her skills.

Candidates needed to have a minimum of seven years experience working with trees, including tending a variety of species, raising them, protecting their health and well-being. They also had to submit a thesis on one area of their work. Those who passed the initial phase of screening were required to complete a full 14-day test of their knowledge and skills, culminating in a written examination.

Equipped with her new qualification, Tsukamoto continued her work of caring for trees all across the country. 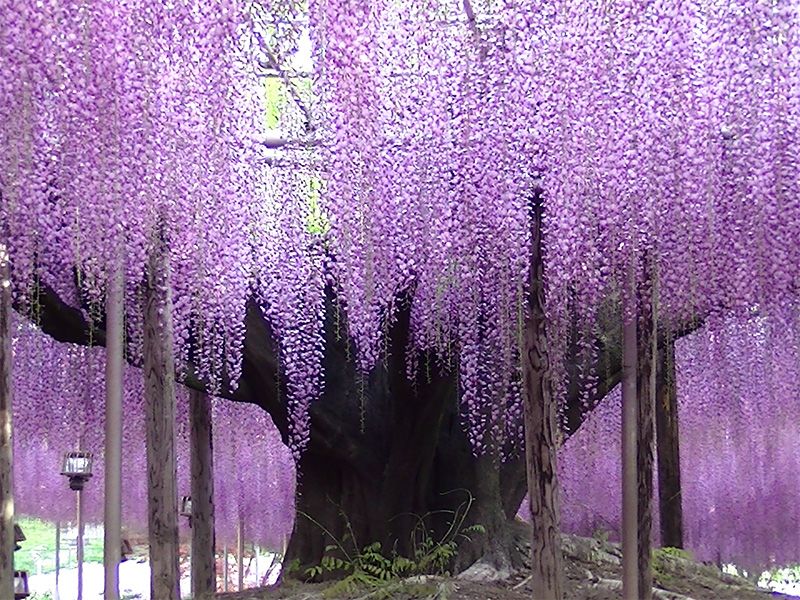 “I’ll receive an SOS from someone who has a weak or dying tree, and I’ll need to visit the site to determine the problem and draw up a cure,” she explains. “Sometimes it’s been struck by lightning or damaged in a typhoon; sometimes it has an insect infestation or some sort of disease. I have to diagnose the ailment and then find a way to cure it.”

Tsukamoto has a special interest in trees classified as “giant,” meaning they have a trunk circumference of at least 3 meters. The biggest tree she has worked with tipped the scales at 35 tons.

“Even before I became a certified tree doctor, I had transplanted more than 100 giant trees, mostly between 500 and 1,000 years old, and I can say that I never had one failure.”

Going Back to the Roots

Tsukamoto refuses to use chemicals in her work and believes firmly in the power of nature to heal itself – assisted by a touch of judicious human assistance.

“We tree doctors say that everything you can see happening in the leaves or in the branches can be traced back to the roots,” she explains. “As long as the roots are sound, the tree will develop in a healthy manner.”

Unfortunately, given that the roots are concealed beneath the ground, identifying a problem is not always an easy task. It has taken Tsukamoto years of patient study and observation to understand the “character” of different trees, including their preferences in terms of soil and growing environment.

“It’s important for me to understand just what the tree wants me to do. I have to 'walk in the tree’s shoes' to understand its feelings,” she says.

Sometimes Tsukamoto is called on to transplant a mature tree to a new location. This can be a colossal undertaking, requiring years of preparation before the tree is ready to be physically lifted out of the ground and transferred to a new site. Of all such projects, the most taxing was the transplant of four 130-year-old wisteria trees whose roots and branches had each spread over more than 600 square meters. In 1994, the wisteria were on a farm near the city of Ashikaga in Tochigi Prefecture, north of Tokyo, and they needed to be moved about 20 kilometers to Ashikaga Flower Park.

“They asked dozens of professors from horticulture universities across Japan, and all of them said it was impossible. Then they came to me and said they really wanted me to try, so I went to a tree and stood in front of it for a long time. And my instinct was that it could be moved.”

“The most important thing with a wisteria is to protect the trunk,” Tsukamoto says. “The trunk is a wisteria’s weakest point, and damaging the bark of a tree can let in infection and disease.”

The entire project took around two years to complete, as the roots had to be uncovered, trimmed, and then put back into their protective soil. Tsukamoto admits having nightmares about the drawn-out procedure.

To prevent damage to the delicate bark, Tsukamoto came up with the idea of making plaster casts—similar to those people wear to immobilize broken limbs—at key points where ropes would be affixed in order to lift the tree.

Fortunately, the transfer passed without mishap, and the wisteria are thriving in their new environment, where they have grown to cover 1,000 square meters each. 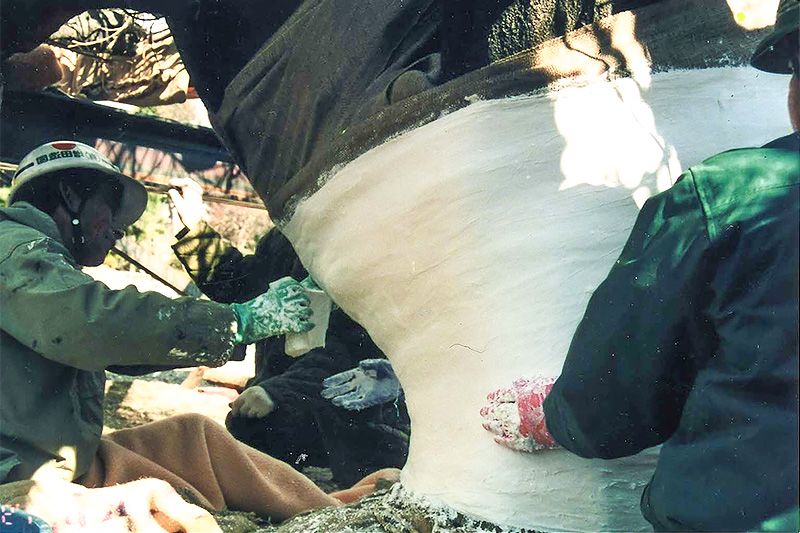 Gardeners wrap the 130-year-old wisteria in bandages and plaster casts prior to moving it. (courtesy of Tsukamoto Konami) 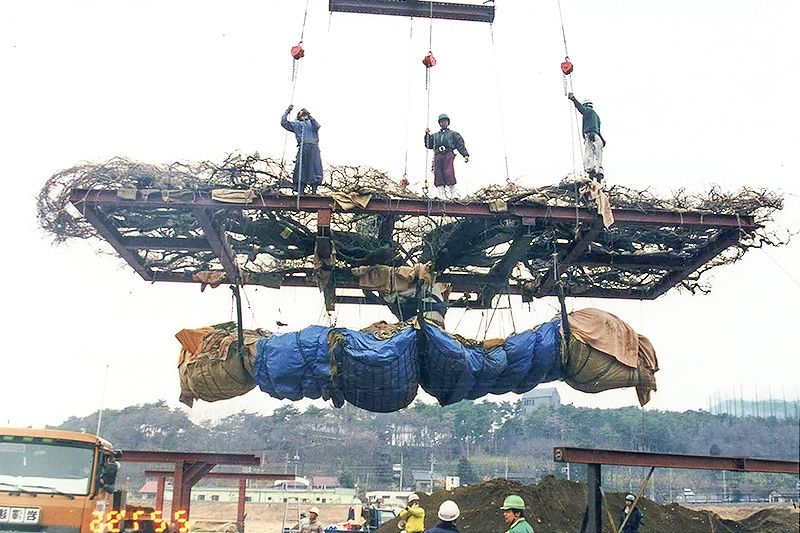 Lifting the giant wisteria during the transplant from Hayakawa Farm to Ashikaga Flower Park. (courtesy of Tsukamoto Konami)

In April 2013, Tsukamoto was asked to assume a permanent post at Hamamatsu Flower Park, which was operating in the red and was in danger of having to close down. Since then, annual attendance has risen from 250,000 to 500,000 visitors a year. 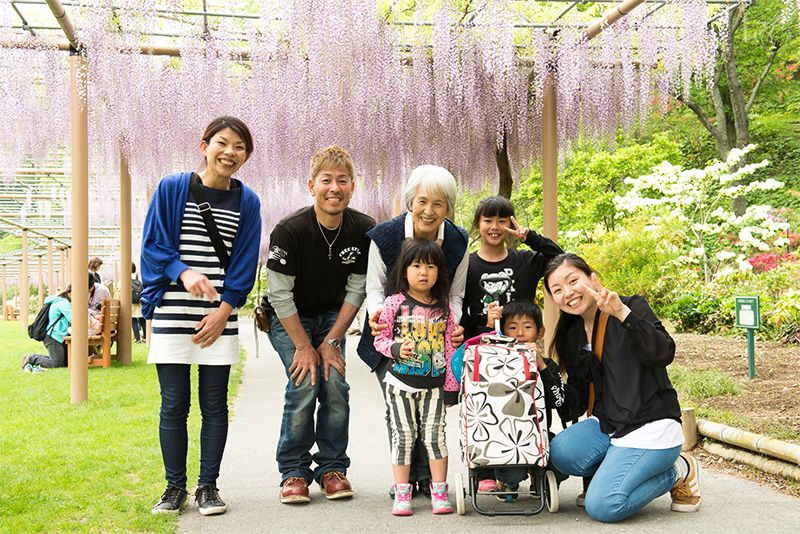 Tsukamoto was frequently asked to pose for photos with visitors during the interview. (© Kodera Kei)

“Since I arrived, I’ve tried to make the theme of the park very clear,” says Tsukamoto. “We’re focusing on cherry blossoms and tulips, and our goal is to be the best garden in the world for these two flowers.” Her wisteria are not too shabby, either.

Tsukamoto has a firm belief that trees, flowers, and natural surroundings are important to people's health and well-being. She fears that younger generations are losing touch with the natural world as they spend more and more time on computers and mobile phones, living in a virtual world.

“I tell everyone, even if you don’t have a big park nearby, look for a small stream, a copse, whatever—it doesn’t have to be large—and find your own special tree. Then talk to it—about the weather, about your day, anything—and the tree will listen.”

Tsukamoto has acted on her belief in the therapeutic value of trees and plants with a program for socially isolated young people, such as those traumatized by bullying in school or suffering from depression. The training and hiring initiative she introduced at Ashikaga has now been instituted at Hamamatsu as well. 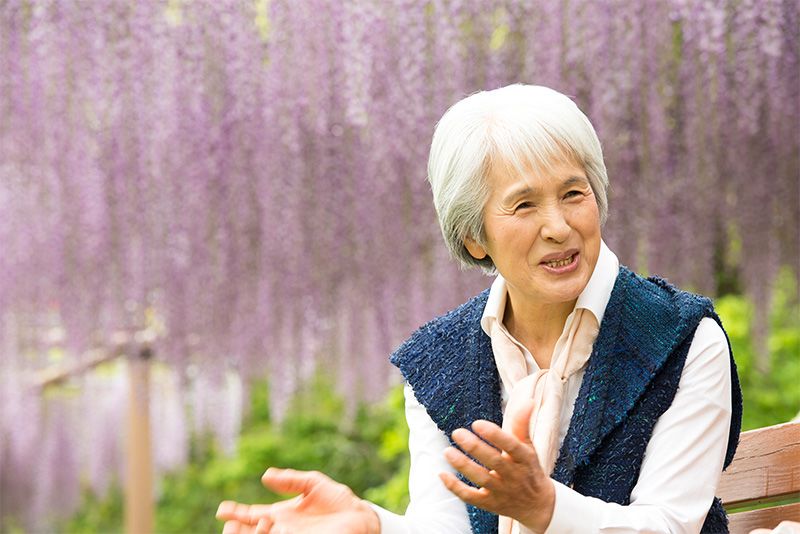 “One young man told me he felt he had no future unless he could get a job at Ashikaga Flower Park,” she said. “He told me that he couldn’t deal with people but was happy working with flowers.” She took him on and, after a few months, invited him to take part in the giant wisteria transplant project. Seeing the tree bloom in its new habitat for the first time and hearing visitors express their delight built his self-confidence.

“He worked at the park for eight years, and by the end of that time, you would never have guessed that he had once suffered from depression.”