Society Sep 25, 2017
For decades now, Kawaguchi Yoshikazu has been challenging conventional agricultural wisdom by rejecting not only chemicals but also machinery, organic fertilizer, and tillage. We asked Kawaguchi to share his wisdom on natural farming and stewardship of the planet. 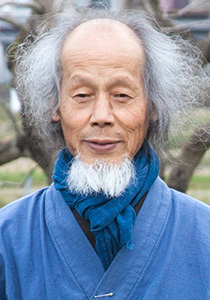 Natural farmer and practitioner of traditional Chinese medicine. Born in 1939 to a family of farmers in Sakurai, Nara Prefecture, where he continues to live and work today. Began to work on the farm after graduating from junior high school but eventually experienced health problems, which he attributes to the use of agrochemicals. In 1978, inspired by the work of Fukuoka Masanobu and others, began to develop his own natural farming method, which has attracted numerous followers in Japan. Author of Shizen-nō ni inochi yadorite (Bringing Natural Farming to Life), Hajimete no shizen-nō de yasai-zukuri (Natural Vegetable Cultivation for Beginners), and other works. 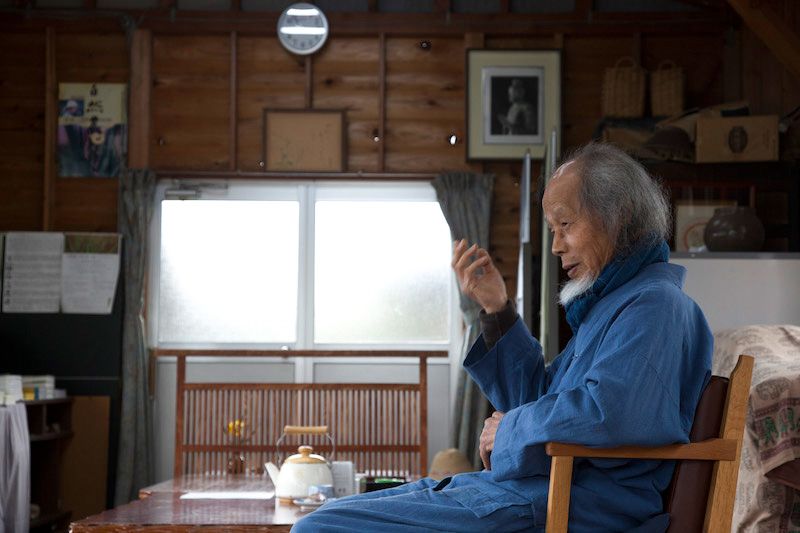 INTERVIEWER  At first glance, your plot looks more like a wild meadow, with its riot of flowers and the butterflies and other insects. But the thick carpet of grass cuttings around the field borders shows a farmer’s assiduous care. Your crops flourish without the benefit of fertilizers, pesticides, or even modern farm machinery. How do you do it?

KAWAGUCHI YOSHIKAZU The most important rule of farming is not to till the soil. If you let nature take its course, the plants, insects, and microorganisms that live there will render the soil soft and fertile, so there’s no need to till. Once you till, you destroy the natural habitat of all those insects and microorganisms. Then the crops won’t grow without artificial fertilizer. It’s a vicious circle.

That said, I do provide a helping hand according to the specific requirements of each crop and the growing environment in each field. The main thing is to trust nature and follow its lead instead of trying to control it. For example, I cut the grass along the borders and paths to keep it from growing taller than the crops, but I always spread the grass cuttings where I mow. The cuttings build up, along with the remains of insects and other tiny creatures. The action of microorganisms breaks it all down, and you end up with rich, fertile soil. For crops that require more nutrients, I also spread vegetable scraps, rice straw, wheat straw, rice bran, wheat bran, rapeseed pomace, and other byproducts of my farming and living activities. I scatter that organic material on the field borders and let it turn to compost naturally. 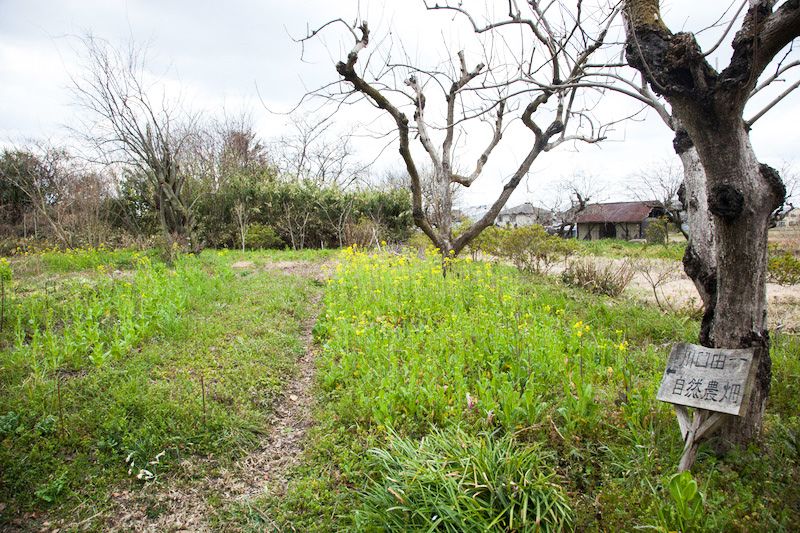 In the spring, a variety of cruciferous vegetables burst into bloom in one of Kawaguchi Yoshikazu’s naturally farmed fields (identified as such by the hand-lettered sign at right).

INTERVIEWER  A number of natural farming methods have been pioneered in Japan, such as those of Fukuoka Masanobu [1913–2008], whose teachings spread around the world. Southeast Asian farmers rehabilitated degraded land and planted forests and banana plantations with his technique of dropping “seed balls” formed from clay and dozens of different kinds of seeds. In 1988, Fukuoka received the Ramon Magsaysay Award for Public Service in the Philippines for his contribution to farming and the environment, but since then his methods have come under criticism as difficult to replicate.

KAWAGUCHI   That’s probably because people are following the rules too rigidly instead of adapting to circumstances. Where the “seed ball” method is concerned, for example, there are crops that will grow from seeds scattered directly on the surface of the ground, and there are others that won’t germinate unless you bury them well. And with the no-plow method, you have to realize that your fields are going to change from year to year. You also have to take into account differences in climate, soil, and so forth. In a very warm climate, if you spread a lot of grass cuttings over your rice paddy, it can turn the water foul and damage the roots of the rice plants. It’s necessary to adapt your methods to the crop as well as to the climate, geography, and soil of your particular locale. You can’t just adhere to a procedure. Adapt, follow nature’s lead, and let nature take its course. If you do those things diligently, you can grow crops anywhere that grasses and other plants grow. Because that’s all rice and wheat and vegetables are. 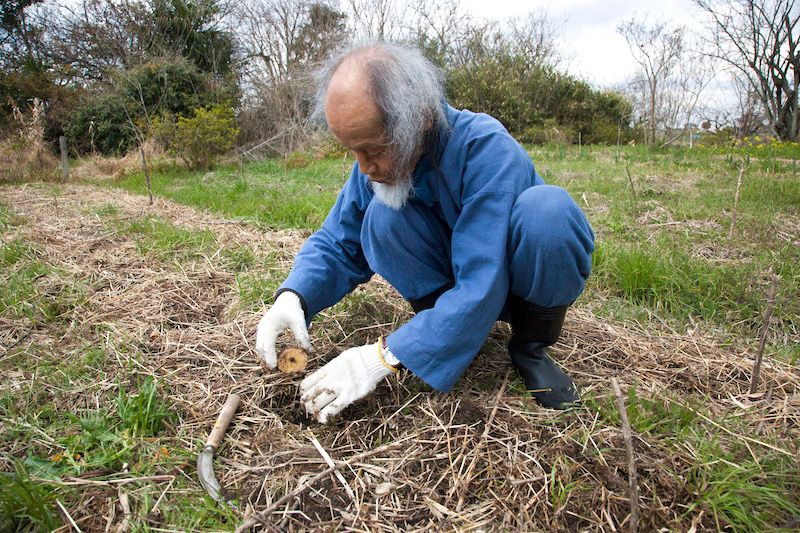 In March Kawaguchi plants potatoes by hand, burying them under a thick layer of straw mulch.

The Paradox of Modern Agriculture

INTERVIEWER   Your natural farming method is low in input and impact, relying only on manual implements, such as sickles and hoes, and using only farm waste as fertilizer. Unlike most organic farmers, you refuse to apply any fertilizer or manure produced elsewhere. These methods are certainly sustainable, but are they an efficient way to feed the world?

KAWAGUCHI I’m sure some people wonder how natural farming using hand implements can possibly be of use in today’s world, with people in developing countries at risk of starvation. Sure, if you go out and buy a tractor, you can plow acres of land in no time at all, and that looks like efficiency. But think of all the hours of labor and the number of workers needed to extract minerals and energy resources to manufacture the tractor. If you look at it globally, it’s a huge amount of work. And now we hear that the potash reserves that are mined overseas to make chemical fertilizer will run out before long. When you look at it in that light, maybe the most efficient and sustainable method is natural farming, which allows you to grow crops with nothing but your own two hands and the kind of implements used since ancient times.

Kawaguchi’s workers prepare a nursery bed to grow summer vegetable seedlings. They line a pit 30 cm deep with rice straw. Then they add alternating layers of food scraps, rice bran, and rice straw, followed by a layer of green grass cuttings and rice straw. After watering the compost, they apply a 15-cm layer of soil, level the surface, and plant the seeds. The bed is encircled by a bank of rice straw and protected by a cover of oil paper applied to a wooden frame. Heat generated by fermentation of the compost warms the soil and accelerates germination and growth of the seedlings.

The True Meaning of Sustainability

INTERVIEWER  In growing and harvesting crops year after year, don’t farmers take more nutrients from the soil than they can replace just by recycling their farm’s scraps and organic waste matter?

KAWAGUCHI That’s a misunderstanding. When you let nature take its course, the nutrients accumulate. For example, plants in the legume family have symbiotic bacteria called rhizobia in their root systems. Those bacteria fix nitrogen from the air and release it into the ground, fertilizing the soil. Plants of all kinds are designed to make use of light and heat from the sun and all kinds of cosmic matter and energy to build their own cells and reproduce. That’s why trees and plants thrive in the forests, mountains, and plains and support all that wildlife, even though no one is applying fertilizer. 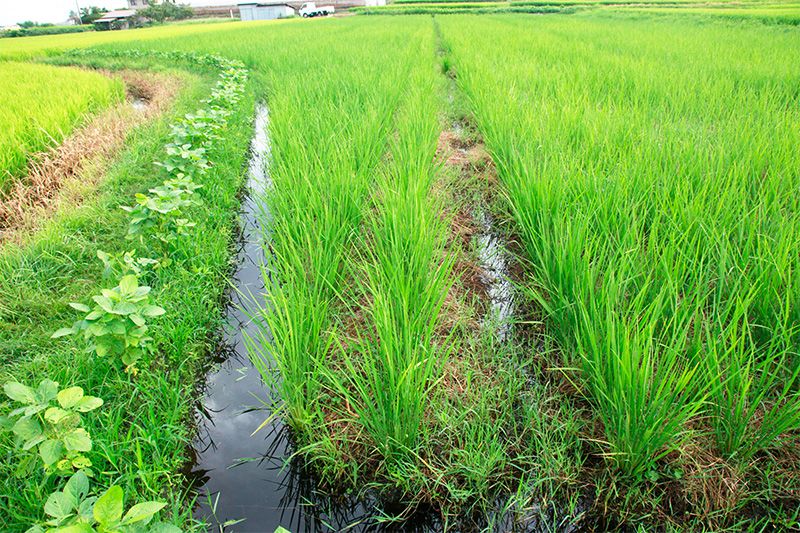 One of Kawaguchi’s naturally farmed rice paddies. While Japanese rice farmers typically transplant seedlings in bunches, Kawaguchi plants one at a time, giving each of them plenty of room to grow. In time-honored fashion, he grows edamane soybeans (also known as azemame, or “ridge beans”) on the paddy borders.

INTERVIEWER   All living organisms exist as interconnected parts of the natural whole. No element is superfluous, not even the smallest insect or microbe. And this entire system is sustained by natural energy, above all, the sun. Now, with climate change impacting our global environment and ecosystems in so many ways, it seems that nature herself is punishing us for the way we live. Does natural farming offers a better way?

KAWAGUCHI   Solar and wind power are called renewable energy sources, as if they were infinite, but they’re not. When we convert sunlight to electricity and use it for human activity, we’re consuming natural energy. We’re plundering the sunlight that plants use for photosynthesis. The same is true for geothermal energy, wind power, tidal energy, and so forth.

In the natural world, life processes never use up the earth’s resources. Organisms eat and excrete, live and die, and the circle of life continues. But human beings are such slaves to the economy that we keep consuming more and more, and there’s never enough. If we continue to use more and more natural energy, eventually we’ll do irreparable harm to the global environment. We need to realize this before it’s too late. As long as we maintain our current culture of economic growth and consumption, we can never truly solve our food and energy problems.

It’s not a simple matter of returning to a pre-industrial lifestyle. We need to pool our wisdom, learn to be satisfied with what we have instead of always craving something more, and realize that there are ways for human beings to exist as part of nature. 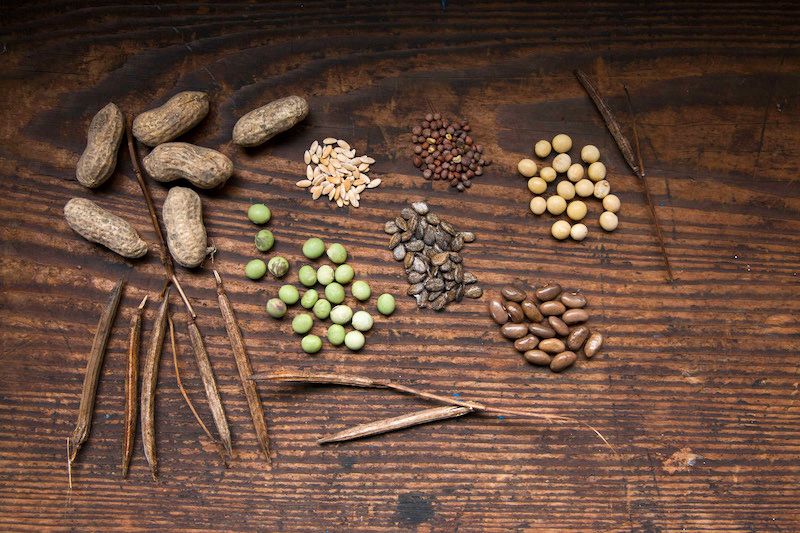 Kawaguchi carefully harvests and stores seeds from such diverse crops as peanuts, watermelon, radish, and soybeans for future planting. Some of those seeds are the legacy of 40 years of cultivation.

(Originally written and published in Japanese on August 10, 2017, based on an interview by Katō Kyōko. Banner photo: Kawaguchi stands amid flowers blooming in a field on his farm. Photos by Katō Takemi.)