Culture Mar 20, 2018
Tanaka Tatsuya’s photographs of miniature figures set against scenes created from food or household goods have become an Internet sensation, earning him more than a million social media followers. In this interview, he talks about the creative process, his daily routine, and his love-hate relationship with broccoli. 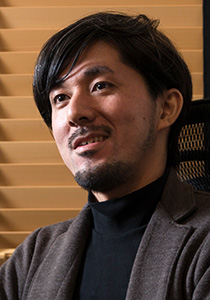 Art director famed for his miniature photography. Born in 1981 in Kumamoto Prefecture. His Miniature Calendar series of original photographs featuring tiny models arranged with everyday items have won huge Internet popularity and been covered in print and electronic media. His works have been used in advertisements and the title sequence of the 2017 NHK drama Hiyokko. Photography collections include Miniature Life, Miniature Life 2, and Small Wonders.

Attention to Detail and a Playful Spirit

The miniature creations of designer Tanaka Tatsuya spark memories of the boundless imagination of childhood, when similarities can be found everywhere. In his world, a slice of strawberry shortcake may become a ski slope and an ordinary loaf of bread a “Shinpansen” train (punning on pan, the Japanese for bread, and the Shinkansen bullet train).

Tanaka combines food and everyday items with miniature figures, revealing new resemblances in his landscapes. He posts these daily in the series he shares on his website, Miniature Calendar, as well as on Facebook, Instagram, and Twitter. His attention to detail and playful spirit have won him more than 1.5 million social media followers as of March 2018, with some 3,000 new fans following each week. More than two-thirds are from overseas, and his works have been exhibited in Taiwan and Hong Kong, as well as his native Japan. 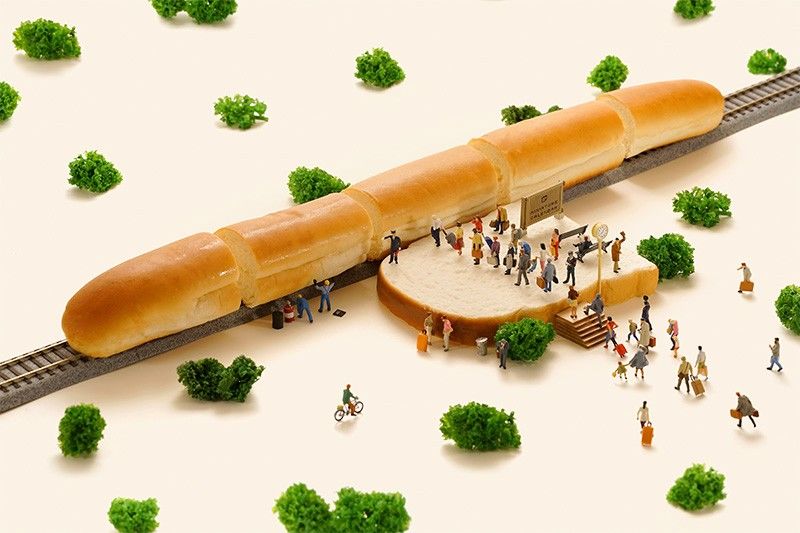 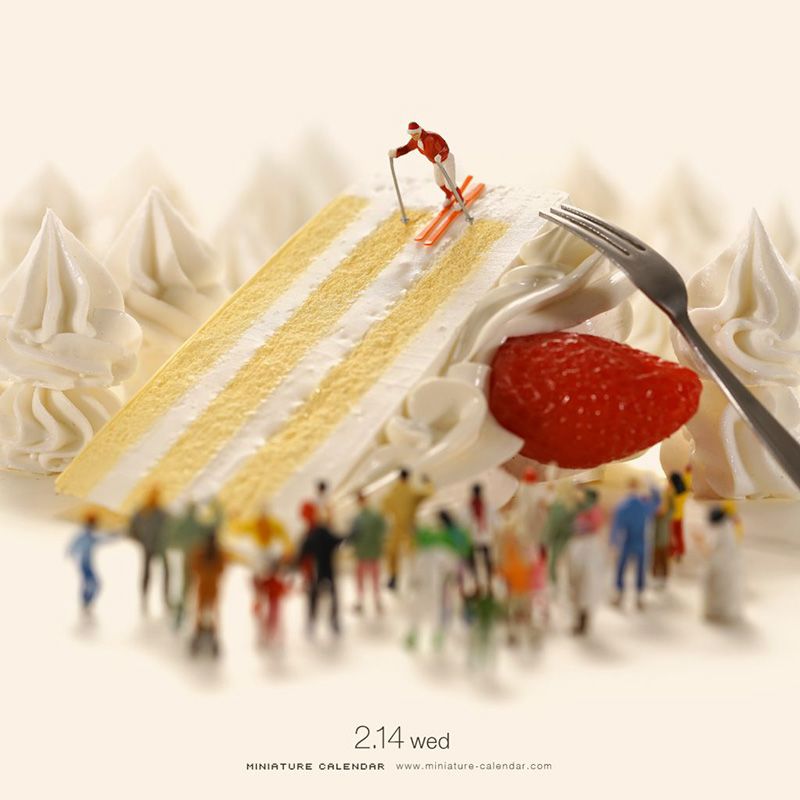 “Soft Snow” is built around an artificial sample cake, but Tanaka’s works may also use real food. (© Tatsuya Tanaka) 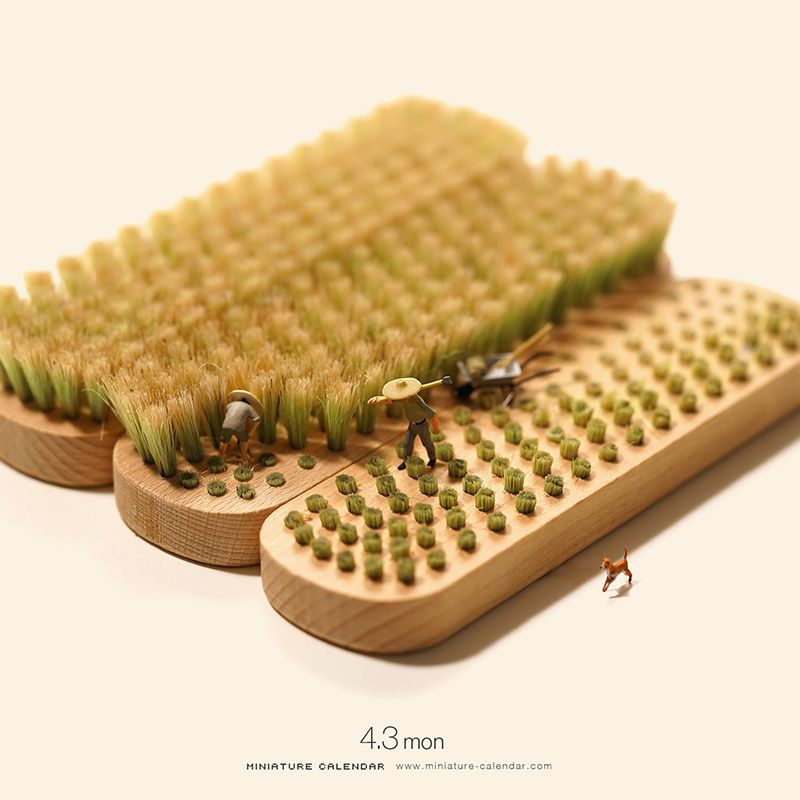 In “Rice Reaping,” the clumps were cut individually by hand; the uneven finish serves to heighten the realistic effect. (© Tatsuya Tanaka)

Tanaka used to work at a design company, planning magazine advertisements as an art director. While pondering ideas to post on his Instagram account, he set up some miniature figures, used for making plastic models, that he had collected. He took a casual approach at first, but the sense of scale in his work was a big hit on the photo-sharing site. Each new post got a big reaction and was widely shared. He shared his pictures intermittently at first, before setting up the official Miniature Calendar site in April 2011. Since then he has posted every day without fail for nearly seven years.

Commonplace items familiar around the world, such as clothespins, toilet paper, fruit, vegetables, and bread, appear in the works. In part because he has many foreign fans, he is always thinking about universal appeal. “I try to make my works simple enough that even grade schoolers can understand them.”

One of the strong points of social media is the direct response from users in the form of likes and comments. Iconic Japanese elements like samurai, ninja, sushi, and cherry blossoms have proved particularly popular with foreign fans. While keeping an eye on audience reaction, Tanaka continues to pursue original ideas that anyone can appreciate. 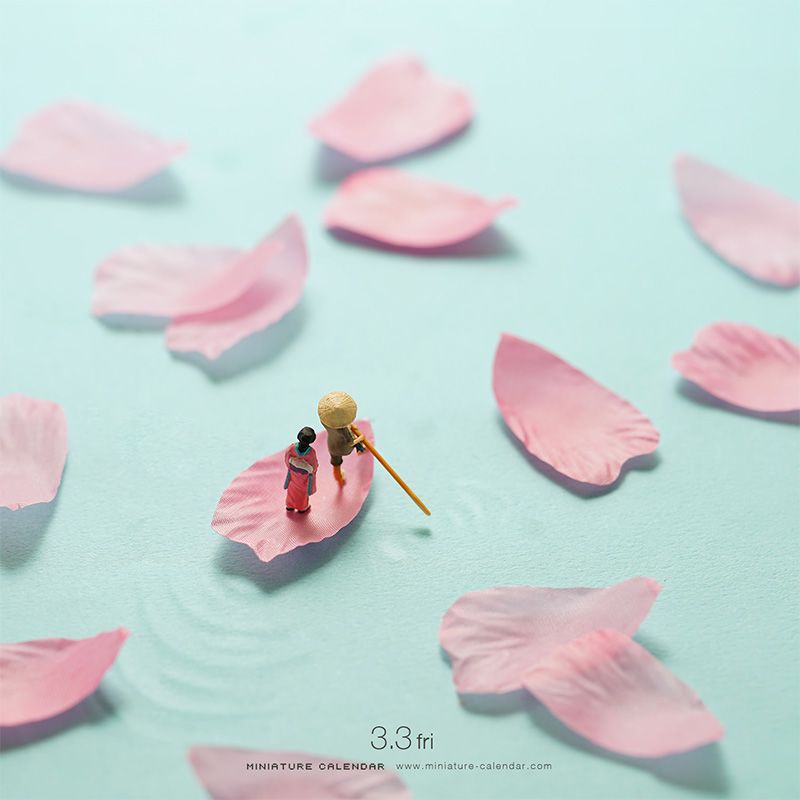 Crossing the water in a “Sakura Boat.” (© Tatsuya Tanaka) 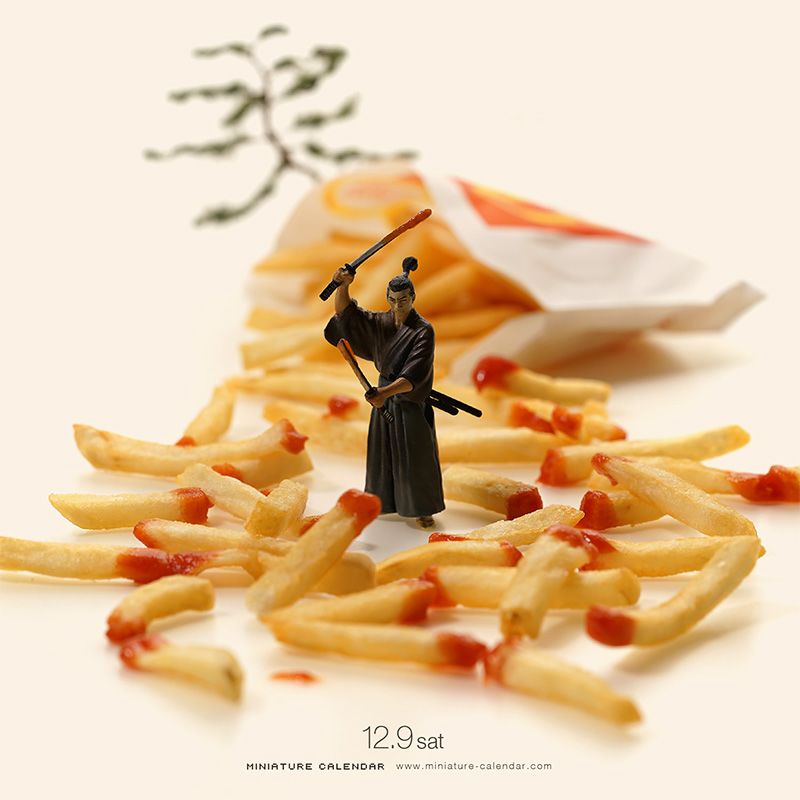 It may look like the bloody aftermath of a battle, but fear not, “This Is Ketchup.” (© Tatsuya Tanaka)

Sometimes Tanaka starts by thinking about what materials he wants to use; at other times, he begins with the scene he wants to create. If there are particular items he wants to put to work, he applies his imagination to placing them in the landscape for his new creation. If he already has a scene in mind, such as at sea, he selects items and figures to use before deciding on the composition.

It takes around two hours from the beginning of construction to the finished social media posts. Tanaka generally spends the first hour choosing and arranging figures and other materials and setting up the lighting. Then he edits the photographs, thinks about a title and hashtags, and shares his creation on his various social media accounts. He does not save up pictures in advance, although he does often take them the day before posting.

Does he ever worry about the pressure of daily updates or that he might run out of ideas?

“Not really. I always do my best to see how well I’m able to build the kind of world I want to within a limited time,” Tanaka says. “Every day I’m racking my brains. I feel these repeated efforts help me stretch beyond my creative limits.” 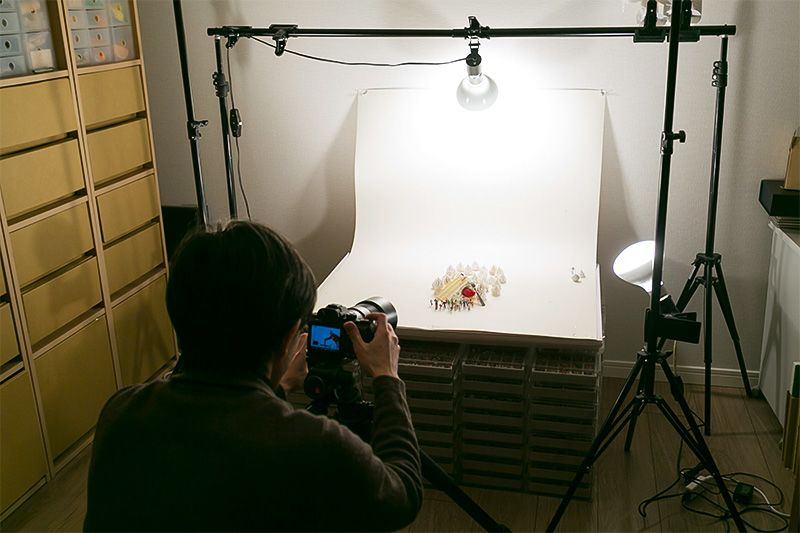 Tanaka says he learned about photography and lighting techniques through self-study. 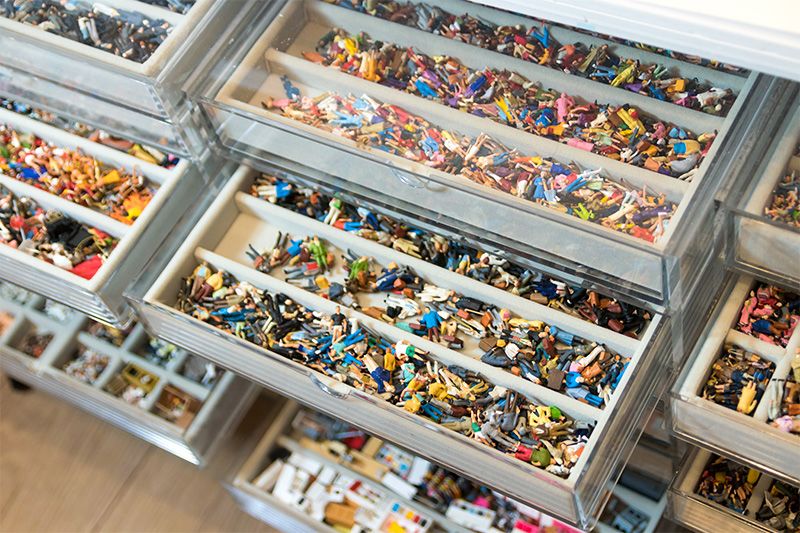 He sorts his miniature figures by size and job, among other factors.

Tanaka began with an original selection of around 50 figures, but now owns over 10,000. He opens the stacked drawers in his studio to display a myriad of characters carefully sorted by, for example, season and clothing. Almost all are produced by the German company Preiser, famous for its model railways. They are finely detailed and brightly colored. The smallest figures stand around 5 millimeters tall. He owns several kinds of figures that are almost identical apart from their size, so he can match them to the dimensions of accompanying items like vegetables or toilet paper. It is a world measured in millimeters, but Tanaka is particular about getting this right.

Among the vegetables that appear in his work, broccoli is a favorite. “It’s easy to see broccoli as trees,” he says, “It’s a perfectly clear resemblance, so I often use it.” When it comes to tucking into the real thing, however, he smiles, “Actually, I don’t like eating it.” 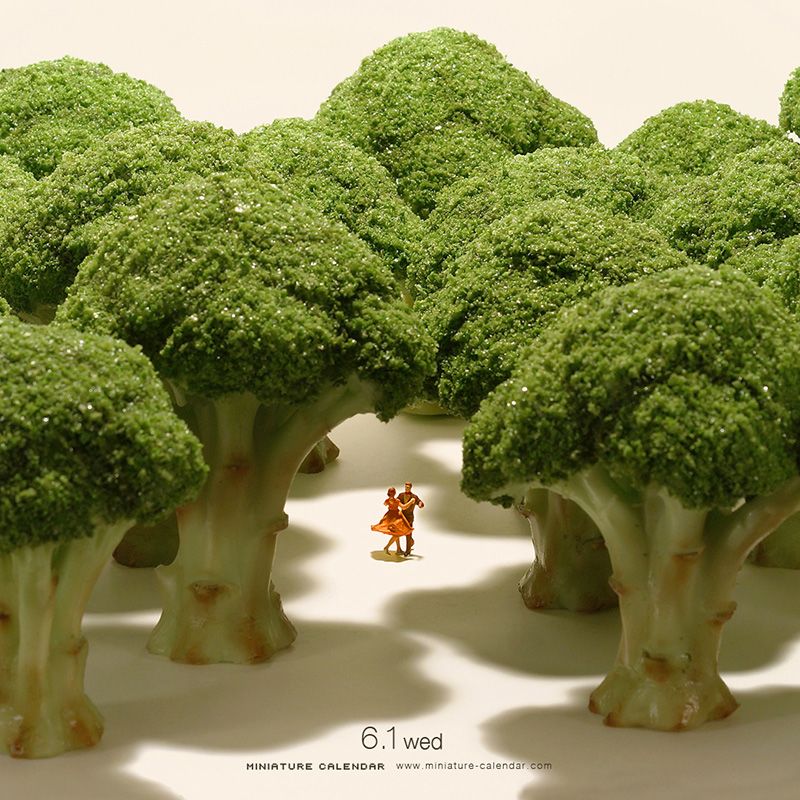 Under Tanaka’s much-employed broccoli trees, “Shall We Dance?” (© Tatsuya Tanaka)

Many of Tanaka’s foreign social media followers hail from Hong Kong and Taiwan. “Land is limited there, like in Japan, and homes are small, so maybe that’s why there’s a culture of appreciating miniature artworks,” he suggests as a reason.

His first overseas exhibition took place in Hong Kong in 2016 after he was invited to share his art with fans there. He later had an exhibition in Taiwan, where he was stunned by the warm reactions from attendees at an autograph event. “I’m happy that people in other countries talk to me without hesitation if they’re interested in my works, without thinking about whether I’m famous or what my reputation is. I’ve certainly noticed that foreign fans are more likely to approach me than Japanese. Many share news about my exhibitions and works on their social media accounts too.”

Tanaka’s goal is to have exhibitions of his miniatures all over the world. He is looking ahead to making moves in the United States and Europe. “But I’m not really known there, so first I have to raise my profile. I want to keep posting engaging pictures every day to get even one more person to look at Miniature Calendar.”

Tanaka aims to connect with the world online and then bring his designs into reality. “One day, I even want the real Shinkansen to have carriages with the ‘Shinpansen’ design.” If his dreams come true, Tanaka’s miniature world will one day expand to life-size proportions. 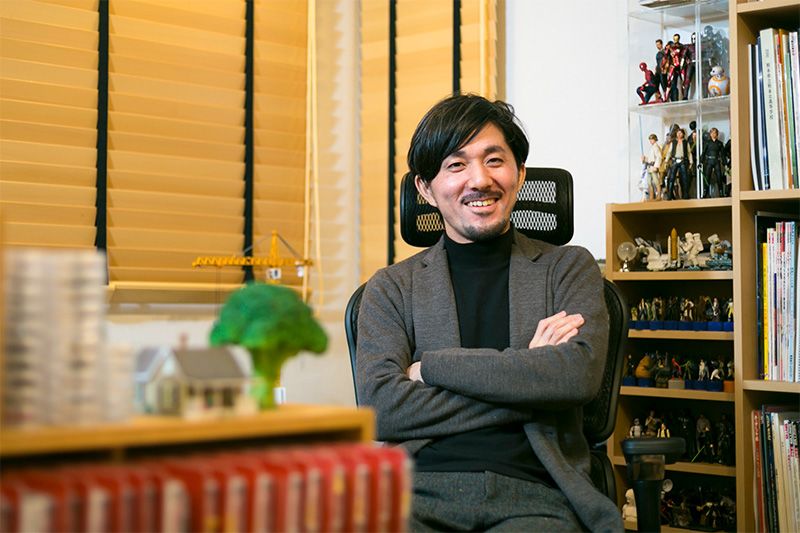