Miyazaki Yoshifumi Explores the Healing Power of the Forest

Society Apr 20, 2018
Shinrin-yoku, literally “forest bathing,” is a Japanese term that means relaxing in the forest to improve health. The term was first coined in the 1980s, but is now attracting increasing attention around the world. Miyazaki Yoshifumi has been researching shinrin-yoku for three decades and is the author of a new book detailing the scientific evidence for this and other nature therapies. 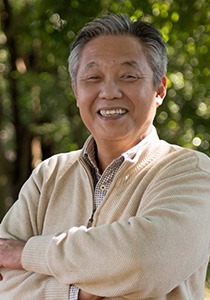 Researcher and author specializing in shinrin-yoku, “forest bathing.” Born in Kobe in 1954. Earned his master’s degree from the Tokyo University of Agriculture and Technology and his doctorate in medicine from the Tokyo Medical and Dental University. In 1990, began scientific experiments on shinrin-yoku on the island of Yakushima. In 1988, joined the governmental Forestry and Forest Products Research Institute. Since 2007, has been professor at Chiba University’s Center for Environment, Health and Field Sciences. In 2018 he published Shinrin-yoku: The Japanese Way of Forest Bathing for Health and Relaxation.

INTERVIEWER   What is shinrin-yoku?

MIYAZAKI YOSHIFUMI   It’s an activity where people relax by synchronizing, or harmonizing, with the forest. The term was coined in 1982 by Akiyama Tomohide, director of the Japan Forestry Agency. The agency wanted people to visit Japan’s forests and relax. It was a way to increase the value of these lands.

INTERVIEWER   How did scientific research into shinrin-yoku begin?

MIYAZAKI   I led the first experiments to study the effects of the practice on the island of Yakushima in 1990. At the time, I was 35 and had no research funds of my own, but I was approached by NHK, which funded the experiments as part of a TV program. A new technique had just been developed to detect the levels of cortisol, a stress-related hormone, in saliva. We used that to measure stress and relaxation. “Forest therapy,” meanwhile, refers to shinrin-yoku backed by scientific data, and is a term that I coined myself in 2003. 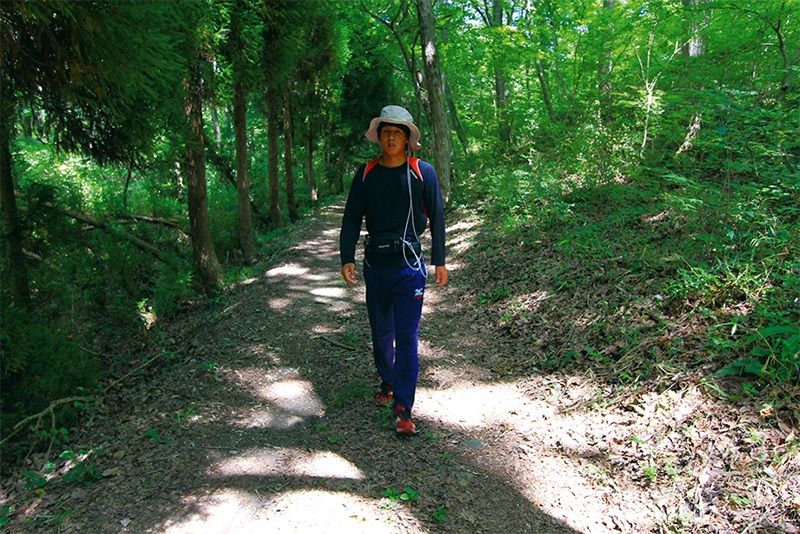 INTERVIEWER   Why do you think there is so much interest in shinrin-yoku right now?

MIYAZAKI   There are two reasons why we need it today. One is the shift to an artificial society. Although human beings and their direct ancestors have existed for approximately 7 million years, we have spent over 99.99 percent of that time living in nature. Our genes are adapted to nature, and they have not changed over the two or three centuries since the industrial revolution. Because we have bodies that are adapted to nature, living in modern society places us in a condition of stress.

The second reason is the shift to an information technology society based on computers. Interestingly, two years after the word shinrin-yoku was coined in 1982, the word “technostress” appeared in America. We have entered a secondary stage of stress.

INTERVIEWER   So how does shinrin-yoku improve health?

MIYAZAKI   Since we’re in this condition of stress due to our separation from nature, we need the forest, a typical example of the natural environment. By ameliorating our stress, we can recover our immune strength and develop bodies more resistant to illness. At the end of the day this will lead to a reduction in medical costs.

There is a common misunderstanding, however. Shinrin-yoku can’t cure illnesses like cancer. Or take influenza—it won’t be cured just by going to the forest; it will just get worse. But shinrin-yoku can help make a body that’s more resistant to disease. 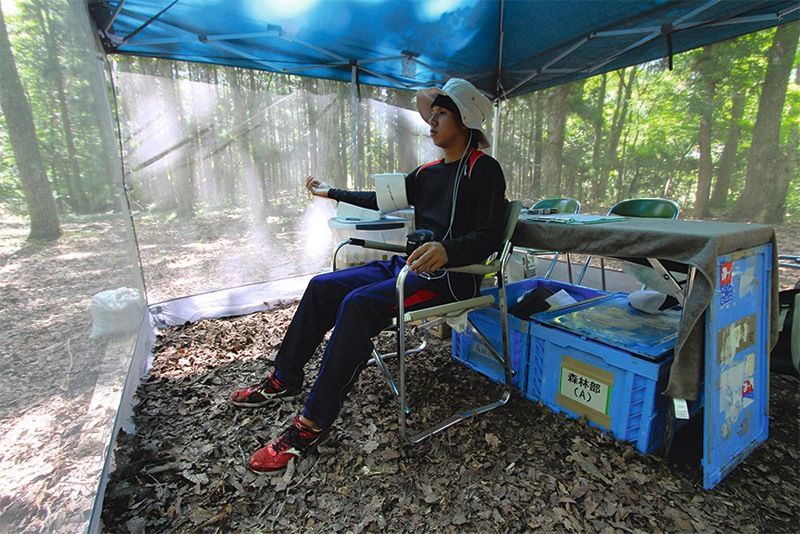 Even sitting still and viewing the forest environment can have beneficial effects, according to Miyazaki’s research. (© Professor Miyazaki Yoshifumi)

INTERVIEWER   Who would you say can benefit the most from forest bathing?

MIYAZAKI   Essentially, it’s people who are at risk of illness. High blood pressure, to take one easy-to-understand example, can be reduced by nature therapy.

In our modern society, young people have less contact with nature than before, and it seems that they are more stressed than ever. Since our bodies are adapted to nature from the start, this result is unsurprising. Right now, depression among children is increasing.

We conducted experiments with high school students, having them observe roses and leafy plants. It is clear that adolescents experience a physiological relaxation effect just by looking at this flora.

INTERVIEWER   Why do you think shinrin-yoku was developed in Japan? 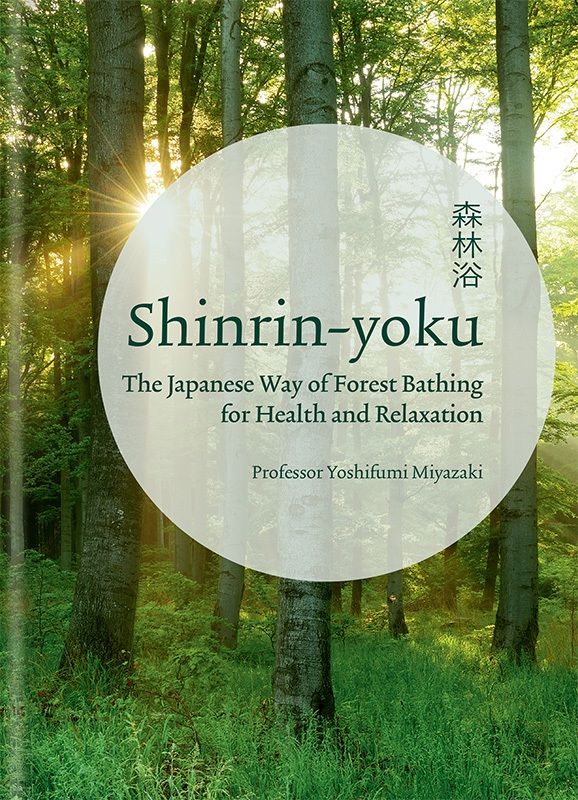 MIYAZAKI   It’s a concept that has existed in Japan from long ago. Japanese people see themselves as on an equal footing with nature. As I wrote in my book, Shinrin-yoku: The Japanese Way of Forest Bathing for Health and Relaxation, before making a traditional flower arrangement a Japanese person will turn and bow to the flowers. Generally speaking, in the West people may see themselves as above nature. But when people go into the forest and come into contact with nature, they feel good. That is the same for people in the West, for Japanese, for Koreans—for anyone, really.

INTERVIEWER   What should people do if they don’t have easy access to nature?

MIYAZAKI   That’s a good question. It’s great to go to the forest, but you might only be able to do that once a month or once a year. There are lots of people who don’t like the forest, and in Japan some are allergic to tree pollen or dislike insects.

The next option is to go to the park or use your garden. On a smaller level, there are the balconies of apartments. You can also use essential oils or flowers. But the most important thing is to choose something that you like. During our research, we found that even small elements of nature have a physiological relaxation effect. They also have the benefit that you can be in contact with them for long periods of time.

About ten years ago, a reporter from Al Jazeera came to interview me. The journalist mentioned that there were no forests in his home country and asked whether the desert has the same effect. I said that no one has researched it, so we don’t know for sure, but my hunch is that even deserts, as a natural environment, would also provide a relaxation effect.

INTERVIEWER   How did you come to devote your career to this field?

MIYAZAKI   When I was in elementary school, my father was very fond of trees and shrubs, so I used to help him with gardening. As I was doing that—planting trees, viewing tulips, touching the earth—I realized that it felt good and relaxing. I held on to that feeling and ended up studying agriculture. In around my high school years, I started to feel that I’d like to explain why that feeling happens.

At the age of 34, I entered the Forestry and Forest Products Research Institute. At that point, I realised that by combining research results from both medicine and agriculture, I could do research into the physiological effects of shinrin-yoku. Two years later, in 1990, I conducted the world’s first physiological experiments into shinrin-yoku on the island of Yakushima.

INTERVIEWER   What kind of experiments have you conducted?

MIYAZAKI   Experiments are divided into indoor experiments, which feature visual and olfactory stimuli, and field experiments.

Initially, for both kinds of experiment our subjects were men and women in their twenties, since they were easy to involve in our experiments. More recently, we have accumulated physiological data from subjects in particular high-risk groups such as those with elevated blood pressure, depression, wheelchair users with spinal injuries, and elderly rehabilitation patients.

INTERVIEWER   What’s the next stage for your research? 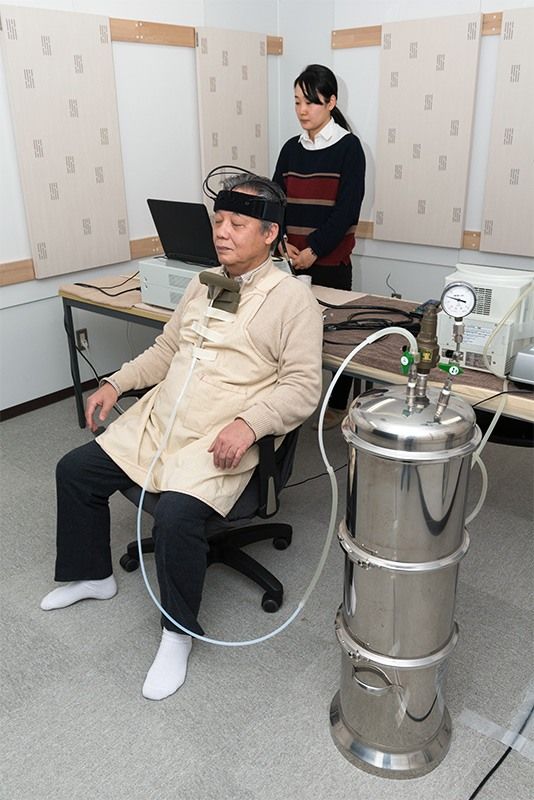 In this kind of test, subjects breathe in forest aromas while their prefrontal brain activity is measured. Ikei Harumi is at rear, running the experiment.

MIYAZAKI   In Japan, various shinrin-yoku programs have been developed. These involve various activities: basic ones, such as slow walking and sitting, but also deep breathing, Nordic walking, embracing trees, yoga, meditation, stretching, and even picnics. There are also possibilities like night-sky viewing, cloud watching, playing in water, waterfall viewing, and enjoying music concerts in the forest.

During our early field experiments we investigated the influence of shinrin-yoku during short periods of around 15 minutes. More recently, we have studied the effects of one-day forest therapy programs lasting most of the daylight hours.

But the data we’ve collected so far has mostly come from single experiments. We need to do those experiments on a repeated, regular basis, and then devise shinrin-yoku programs based on the results we see. Going forward, we need to develop continuing forest therapy programs aimed at patients with high blood pressure, depression, and other conditions that shinrin-yoku is mostly likely to help.

(Photos and text by Tony McNicol. Banner photo: Miyazaki Yoshifumi in his laboratory, the forest. All photos © Tony McNicol except where otherwise noted.)

Shinrin-yoku: The Japanese Way of Forest Bathing for Health and Relaxation is available in English from Octopus Publishing.