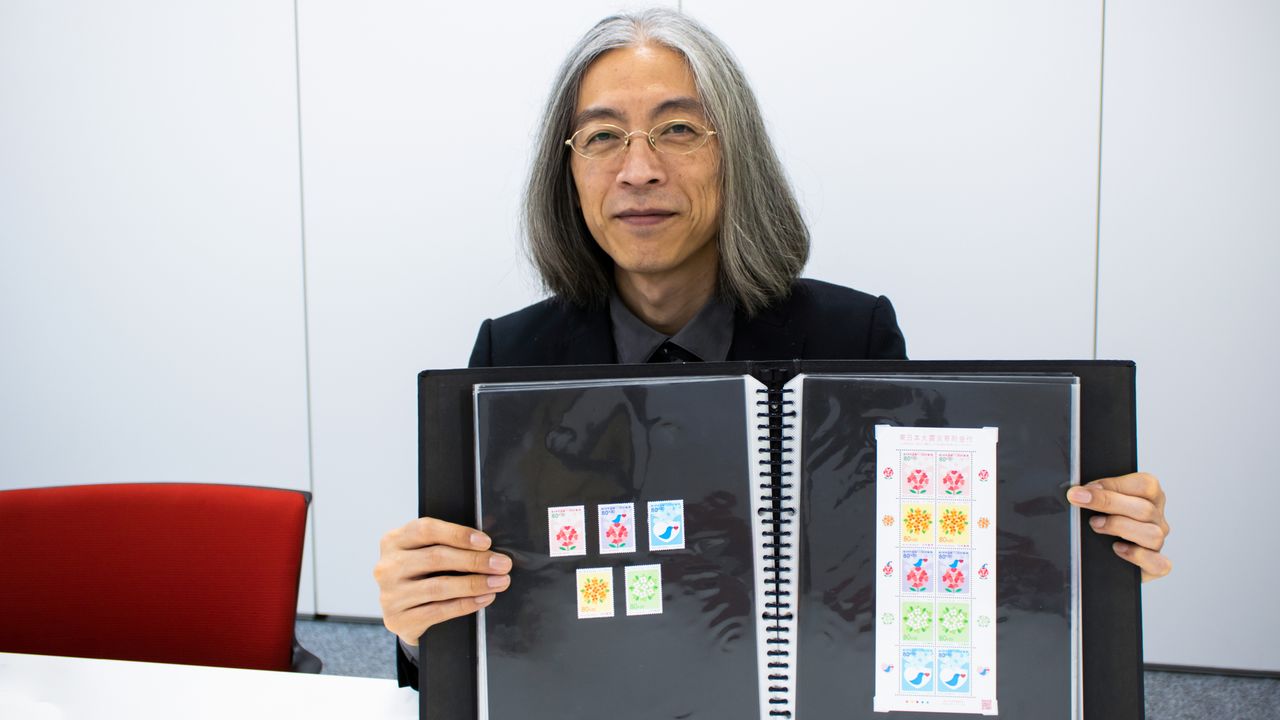 Culture Economy Art Design Oct 2, 2019
Letter writing has decreased dramatically since the advent of email, but “snail mail” offers benefits not possible digitally, like that heartwarming feeling when you come home to find correspondence from an old friend in your mailbox. We interviewed Tamaki Akira, one of only eight stamp designers in Japan. 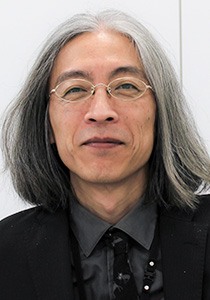 Born in 1968 in Mie Prefecture. Hired in 1991 as a technical officer by the then Ministry of Posts and Telecommunications. He has designed over 150 stamps, in 800 versions, with more than 2.1 billion printed, and sales valued at over ¥160 billion. He has designed stamps for the Agricultural Research Centennial (his debut work, 1993), stamps including a donation for Great East Japan Earthquake recovery (2011), and stamps for the 2020 Olympic and Paralympic Games in Tokyo (2019).

There is no obvious connection between diverse themes like traditional Japanese sweets, famous kabuki scenes, the Tokyo 2020 Games, Meiji-era color prints of Tokyo and Yokohama, and the G20 Osaka Summit, but they are all designs of commemorative stamps issued by Japan Post Co., Ltd.

Being able to convey a sense of Nippon condensed onto a tiny piece of paper just centimeters on a side is the unusual work of the stamp designer. There are only eight of these specialists in Japan. In 2019, Japan Post plans to issue 47 commemorative stamp sets. Often, a single sheet comprises 10 different designs, meaning that these designers have their work cut out for them. We spoke with senior stamp designer Tamaki Akira to gain insight into the day-to-day thought processes of a stamp designer.

INTERVIEWER  Why did you decide to become a stamp designer?

TAMAKI AKIRA  I first joined the Ministry of Posts and Telecommunications in 1991, prior to its privatization. Initially, like most art school students, I intended to find employment as a graphic designer or in advertising, but my teacher told me that the ministry was recruiting and suggested I apply. I took the entrance exam, and somehow I passed. It wasn’t that I had any particular interest in stamps, though, and I told myself I could quit if it wasn’t interesting.

I kicked off the job by exchanging stamps issued by Universal Postal Union member states, the sorting of which is a task assigned to new employees. The stamps are delivered in bulk a few times each year, and in the process of categorizing them I saw that such a tiny object contained limitless possibilities. Japan excels in the field of stamps, but I gained the impression that our stamps were far inferior to those of Europe in design and use of color. I realized that stamp design in Japan was a field with great scope to tackle new horizons, and I became engrossed in my work.

INTERVIEWER  Is there any particular assignment that stands out in your career?

TAMAKI  That would be the stamps whose purchase price included a donation that we produced immediately following the 2011 Great East Japan Earthquake. The decision was taken to issue the stamps just days after the disaster and we had to finalize designs, a process that usually takes two to three months, within a week.

By nature, designers are unable to discard their ego, even when employed at a company, because they work in pursuit of their own image of beautiful, cool or sexy. But on this occasion, I realized this wasn’t the priority. My aim was to contribute in any small way to boosting stamp sales—to do anything that would help raise more money for the relief effort. I had no hesitation in overlooking my own preferences. I was humbled just to be involved in the disaster relief through my work as a designer. 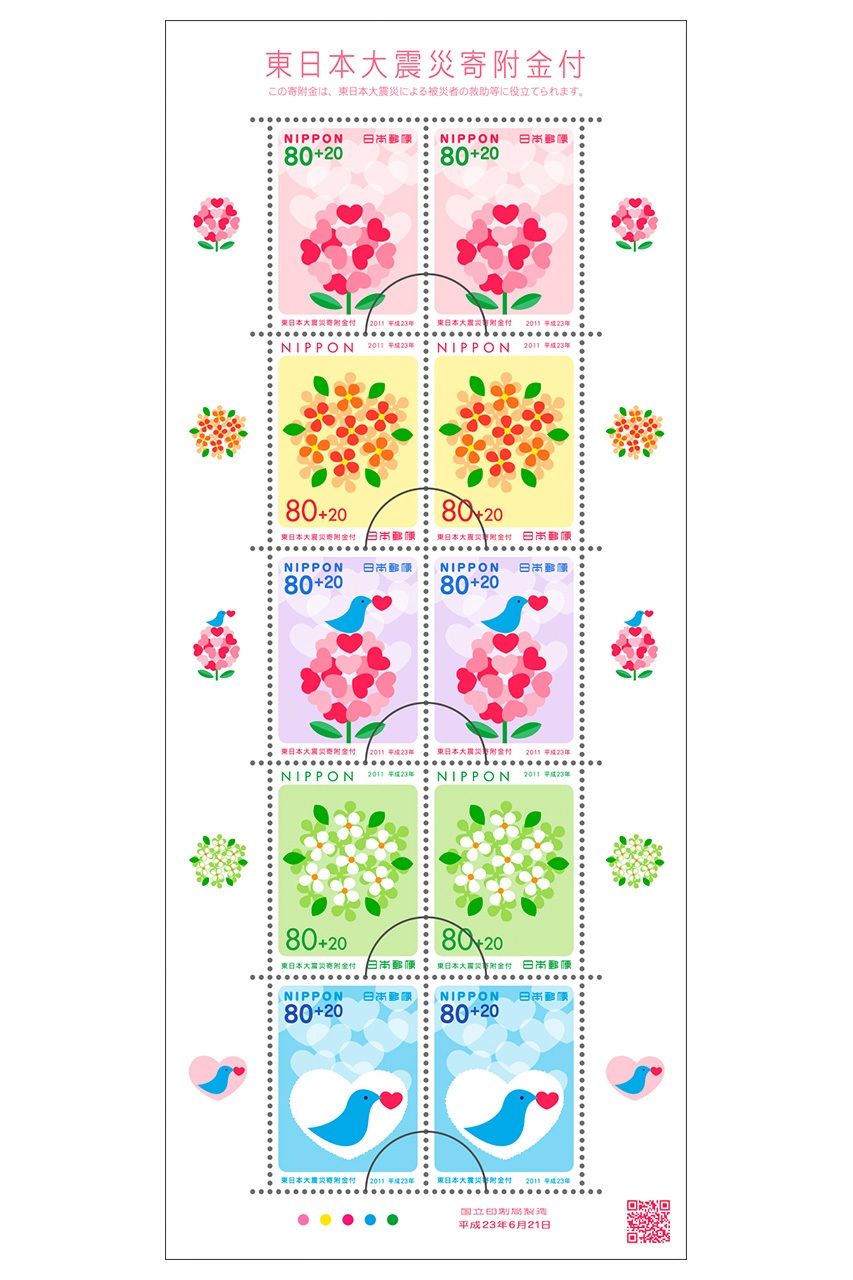 INTERVIEWER  What finished work pleased you most in terms of aesthetics?

TAMAKI  It would have to be the design for the 2018 Philately Week stamps, using images of the wind god and thunder god by Tawaraya Sōtatsu. These come from early seventeenth-century folding screens that are Japanese national treasures. I tried to create a design that didn’t interfere with the beauty of the original pictures, but would meet the requirements for stamps.

A stamp designer is like a chef. In some instances, we start with our own illustrations, but when we are provided with ingredients of the highest quality, we need to consider how best to arrange them to accentuate their flavor. It’s like preparing sashimi, where the point is to highlight the freshness. 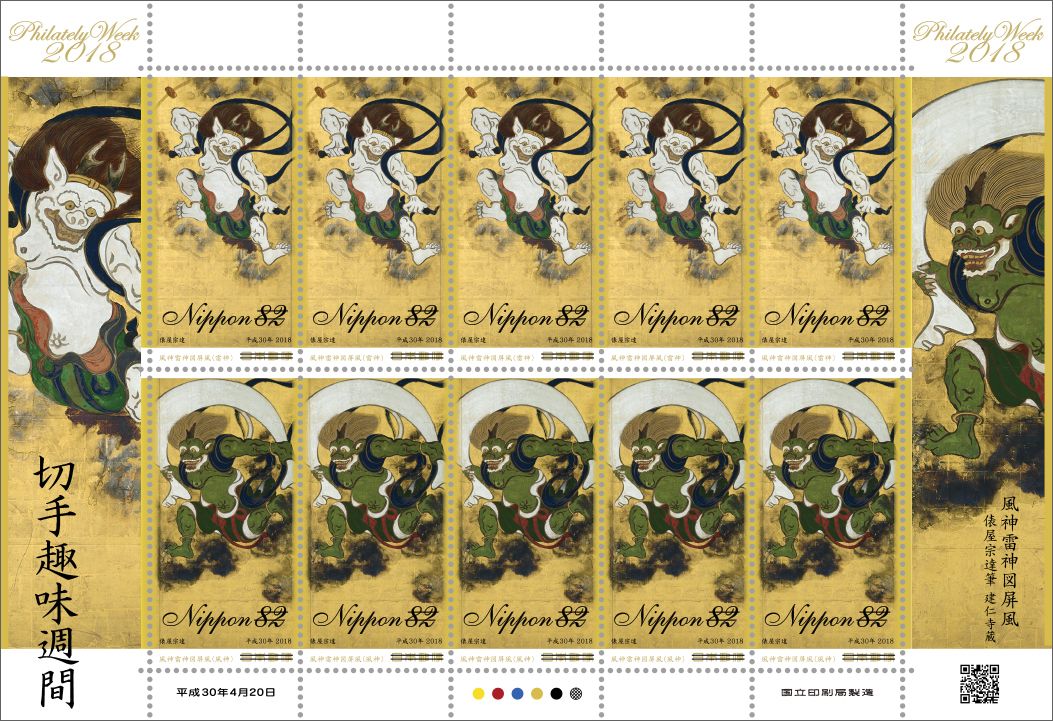 TAMAKI  During the years of the ministry, designers were considered to be artisans or illustrators. It wasn’t that we weren’t conscious of the customer, but I wasn’t familiar with such concepts as cost-effectiveness or the profit ratio. Now, the attitude is totally different, and increasing profits is one of our stated goals. We collaborate with planners to create stamps that will appeal to the user, taking into consideration who we want to sell to, and how.

In 2019, for example, we issued stamps to commemorate international conferences and anniversaries, with the G20 Summit and the 150th anniversary of modern geographic surveying. But there aren’t many people who think, “Gee, the G20 Summit is coming to Osaka—I should buy the stamps.” The usual incentive to buy a particular stamp is the desire to affix it to send correspondence, or to collect it for its beauty. We believe that creating attractive stamps that sell raises greater awareness of a project than simply issuing commemorative stamps for the sake of publicity. 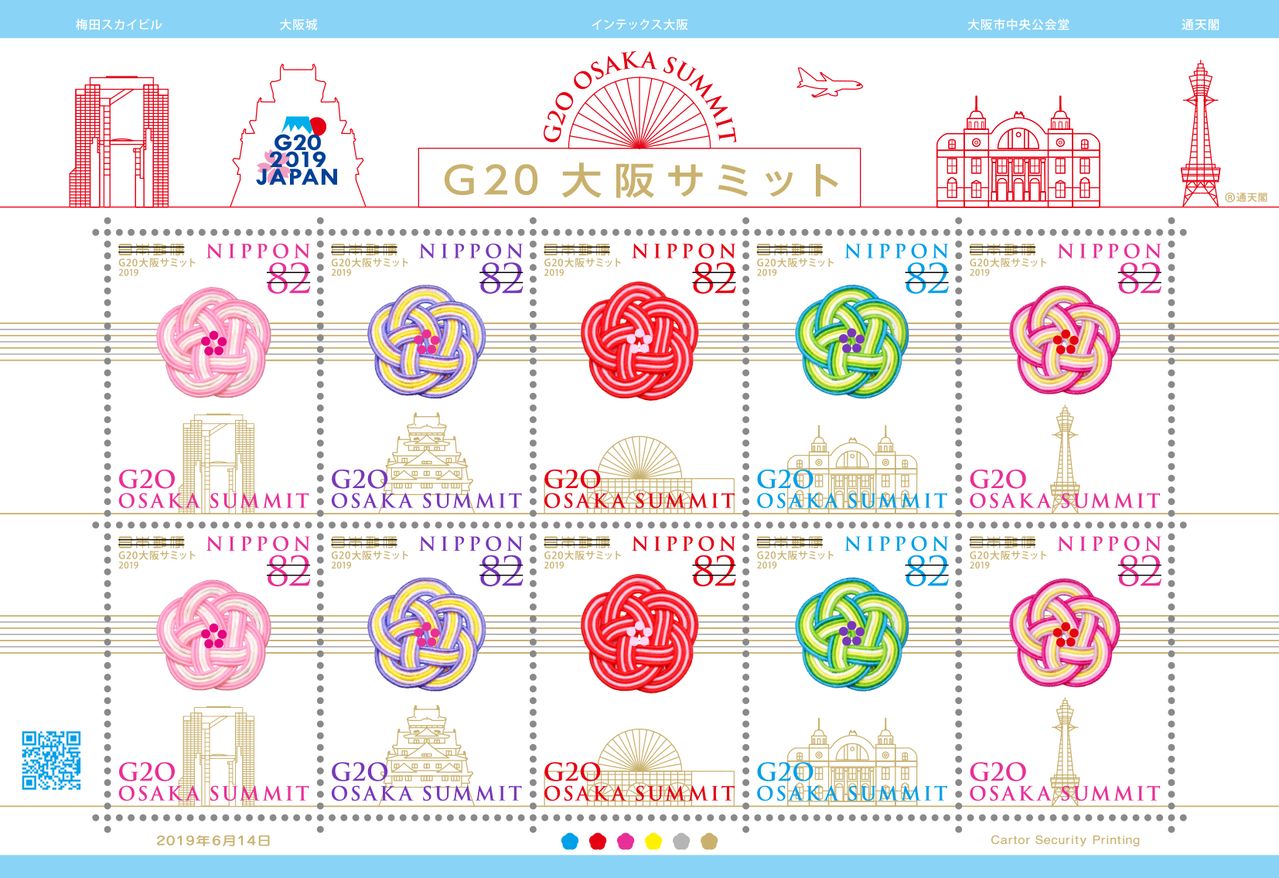 The “sweets” series of stamps we issued in February 2019, although not my designs, were truly a series produced with the pleasure of the user in mind.

We asked the editorial department of the style magazine Brutus to select twenty shops in Tokyo with attractive cakes or other sweets that people would want to share with their friends, and we used these for our stamps. We collaborated with Brutus in promoting the series, and even attracted attention in online and social media. People said that they wanted to “visit all of the shops,” commented that they “couldn’t wait to post a letter,” and requested a Kansai-area series. 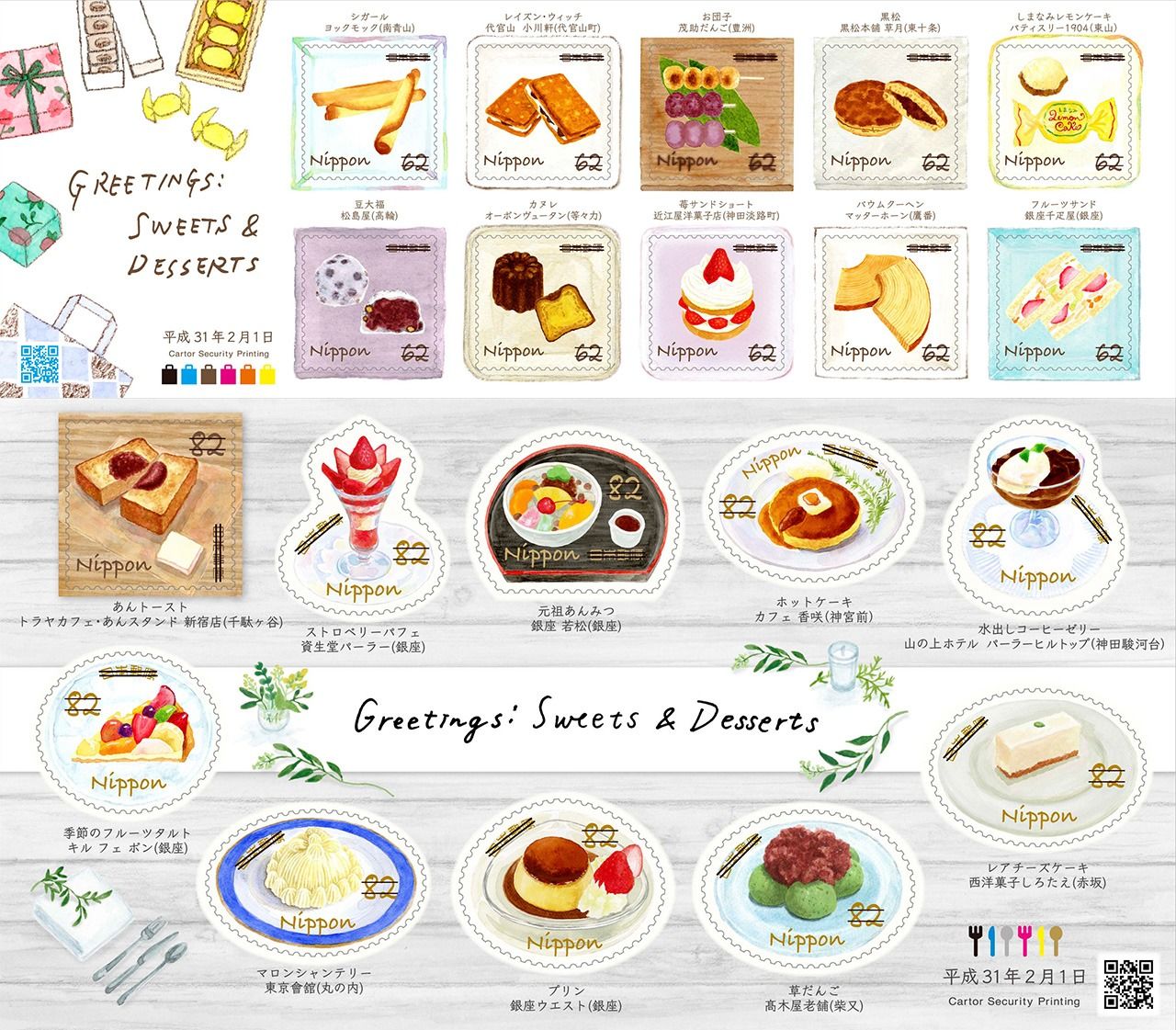 The sweets and desserts sheet came in a convenient sticker format, requiring no moistening to affix the stamps (designed by Yamada Yasuko; issued on February 1, 2019).

Social media is competition for regular mail, so it was very significant that we could leverage it to stir interest in analog communication.

INTERVIEWER  Would you say that online communication, rather than being a rival, has simply backed postal services into a tight corner?

TAMAKI  Social media and email are extremely convenient. They’re cheap and don’t take up space. In contrast, letters are somewhat of a hassle—stamps are expensive, writing by hand takes time, and you need to go to a post box to send them. It makes you wonder why people write letters.

I think that the main reason is because they last. When Japanese people write New Year’s cards, generally we look back at the cards we received a year earlier. This could remind you that you haven’t been in touch with someone lately, or stir nostalgia for old school friends. You might come across a postcard from decades ago when tidying your desk, suddenly evoking memories of the sender. I don’t think this happens as often with email or social media. The latter in particular is a nonstop flow—you usually don’t go back to reread things. In comparison, a letter is a physical object that remains with you and stays in your memory. This form of communication has greater durability over time—essentially, it has an “expiration date” that’s much farther in the future.

I wouldn’t say that one is good and the other is bad—the nature of the communication is totally different. In a sense, it’s akin to the difference between fast food and “slow food.” Letters are “slow communication.” Of course, we’re concerned about the decline in postal volumes, but letters still play a role for sharing things that can’t be communicated by social media. I believe that there are still a certain number of people who appreciate this, so I don’t think post will perish any time soon. 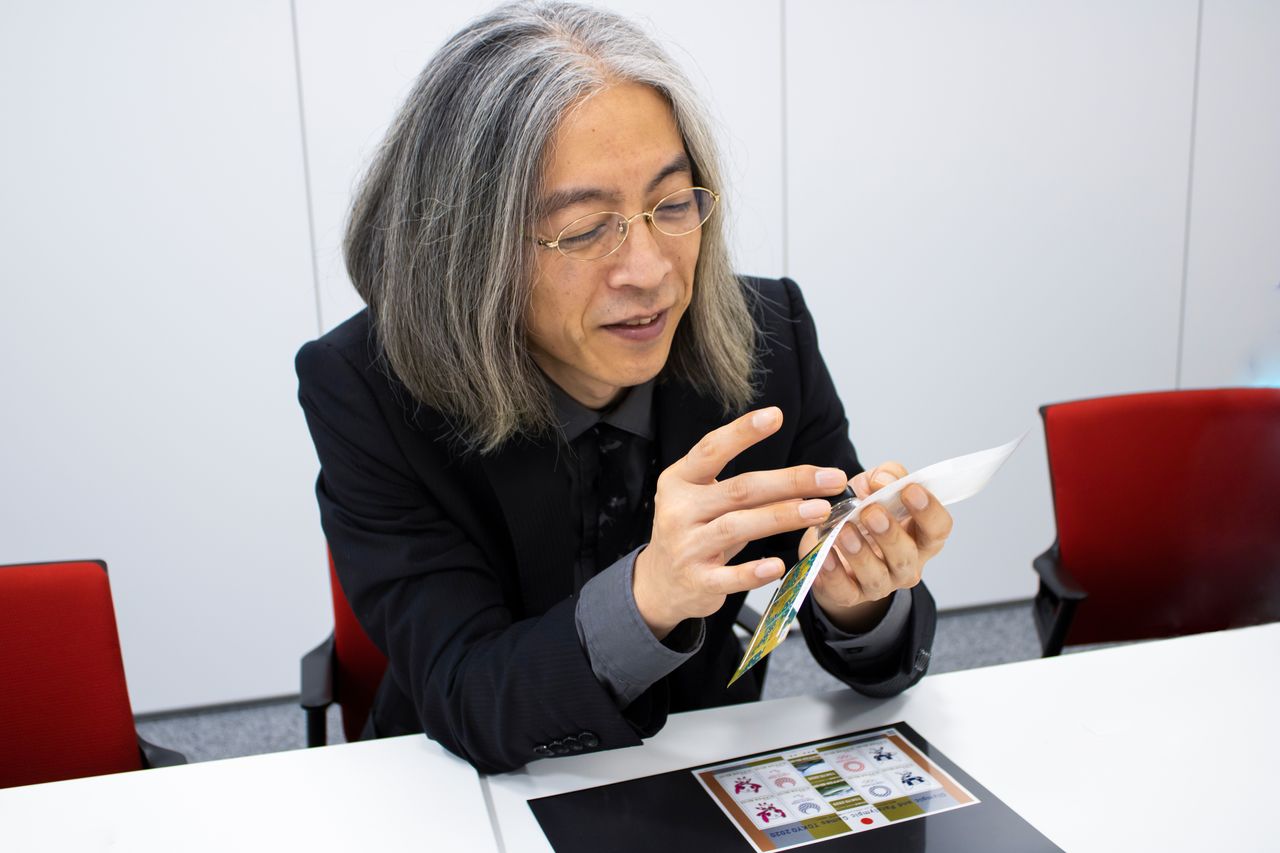 INTERVIEWER  Are stamps a decorative touch for “slow communication?”

TAMAKI  In my mind, stamps add flavor rather than decoration. A good analogy is udon noodles—it’s always nice when they are sprinkled with shichimi spice, spring onion, or grated ginger. The addition of a condiment enhances or changes the flavor. A skilled letter writer is also adept at such “flavoring”—for example, selecting motifs of flowers in season at the time, or illustrations of cartoon characters when the recipient has young children. If you choose something with a scene from your hometown when you write to a childhood friend, it can convey a longing to meet again. Stamps are a medium that contain nonverbal information, acting as a speaker for your message. There’s no such function in social media.

For years, stamps have been considered tiny foreign ambassadors. They can present a country’s culture, customs, arts, and even its spirituality and grace. Stamps have been used to bolster national prestige in wartime, but I’m glad that now, we live in an era when designers can exercise a degree of playfulness and create enjoyable stamps for people.

I hope that more people in Japan will use stamps as a tool in slow communication. But it’s also my wish that more international visitors will discover our stamps, which can make beautiful, compact souvenirs, and cost less than 1,000 yen for a sheet of ten. Travelers can take them home and use them to talk about Japan with family and friends, or even frame them, to create a happy memento of their time in Japan.