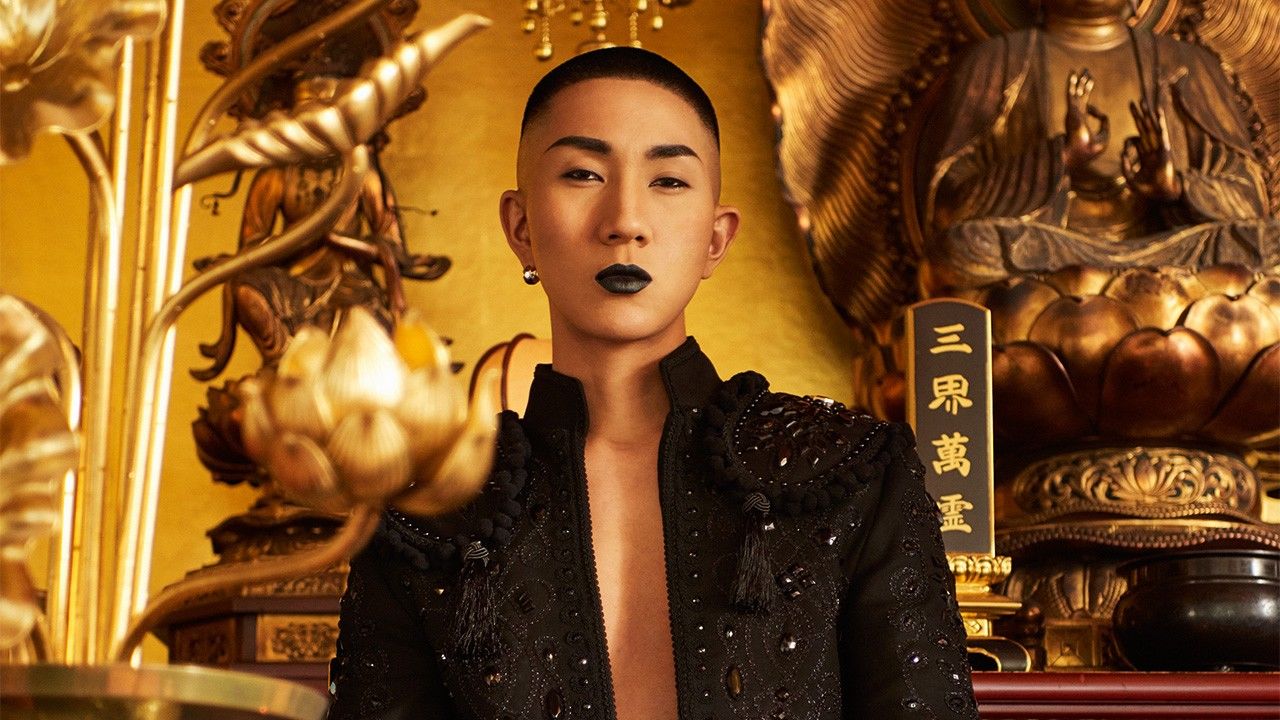 Society Fashion Apr 20, 2022
Monk of the Buddhist Pure Land school, makeup artist, and LGBTQ+ activist Nishimura Kōdō’s best-selling Japanese memoir was recently published in English as This Monk Wears Heels. Tony McNicol, who translated the book, reports on a presentation Nishimura gave in London this March titled, “Be Who You Are: A Talk About Sexuality and Buddhism.” 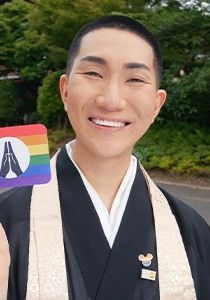 Buddhist monk, makeup artist, and model. Born in Tokyo in 1989. After graduating from the Parsons School of Design in New York, worked as a makeup artist, including at the Miss Universe pageant and New York Fashion Week events. In 2015, Nishimura trained to be a monk and was certified by the Pure Land school. After appearing in Queer Eye: We’re in Japan, he rose to prominence as an LGBTQ+ activist, speaking at the United Nations Population Fund, Yale University, and Stanford University and making multiple global media appearances. Selected by Time magazine as a Next Generation Leader. Author of Seisei dōdō: Watashi ga suki na watashi de ikite iinda, published in English translation as This Monk Wears Heels in February 2022. His website is www.kodonishimura.com.

Monk on the Global Stage

It’s a strange feeling to finally meet an author after translating his book. Reading, rereading, and translating Nishimura Kōdō’s memoir, I’d come to know his Japanese voice well. It is eloquent, genuine, bubbly, and funny. What would his voice in English be like? It was a surprise, yet somehow not unexpected, to instantly recognize that voice in English too. Nishimura was giving a talk on “Sexuality and Buddhism” to a fascinated audience in a packed room at the Pantechnicon cultural center in London. 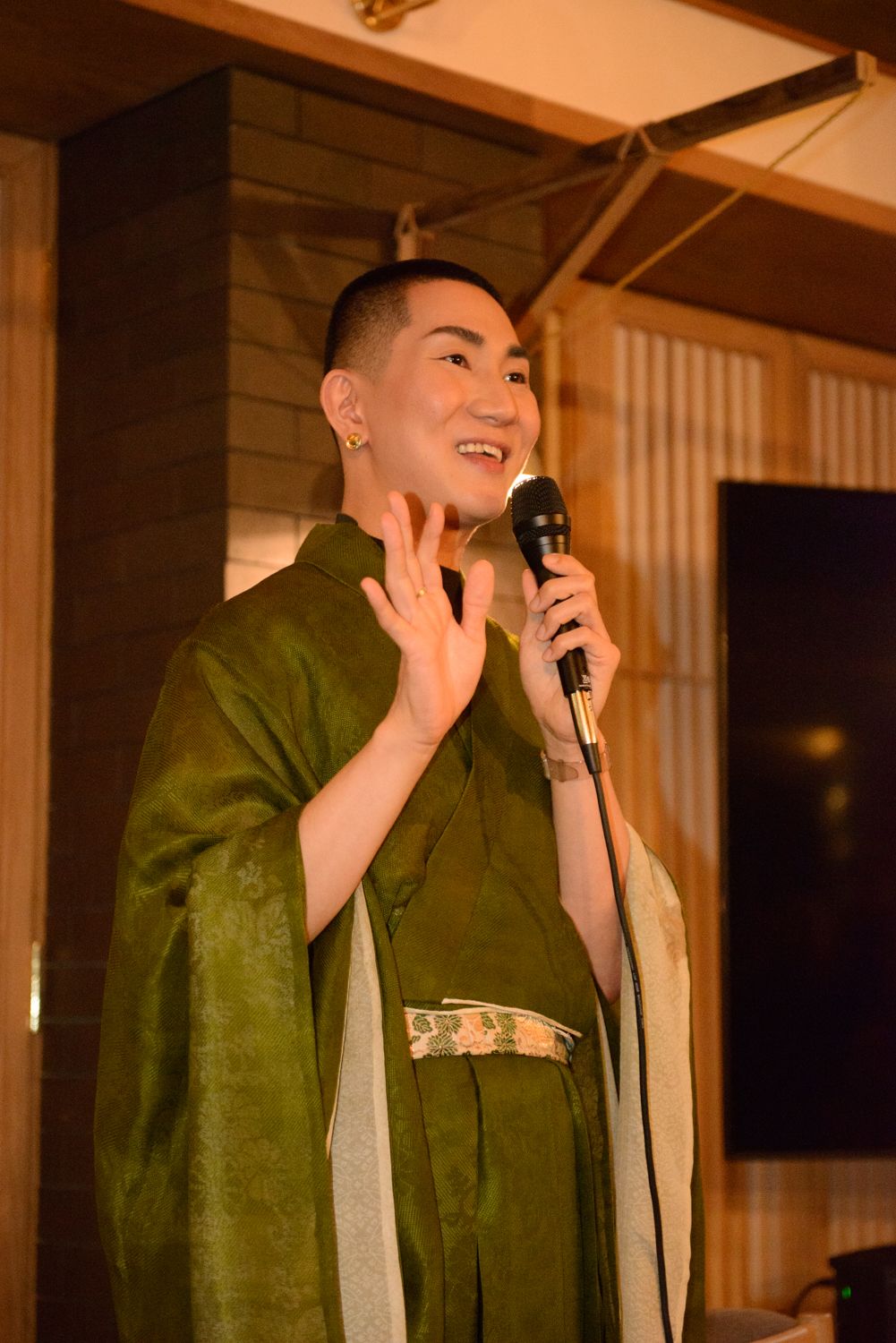 Nishimura speaks at the Pantechnicon in London on March 20, 2022. (© Tony McNicol)

A fundamental teaching of Buddhism is that “Everybody and anybody can be liberated,” Nishimura told the audience. So why is it that LGBTQ+ people in Japan still experience difficulties, or even discrimination, in their encounters with Buddhism?

For example, posthumous Buddhist names in Japan are gendered, but do those names match the gender that the deceased preferred to identify as in life? Even those training as monks discover that the rituals and rules of Buddhism fail to take into account different sexual and gender identities.

As a high-profile Buddhist monk, an author and activist, and someone who can communicate with ease in Japanese, English, and Spanish, Nishimura is working to make Buddhism—and religion in general—more welcoming to the LGBTQ+ community.

In 2020 he published his Japanese memoir, titled Seisei dōdō, a reference to the “unapologetic” or “bold” life he recommends people live for themselves. Then, in 2021 he was selected as a Time Magazine Next Generation Leader. His many media appearances include an episode of Netflix’s Queer Eye: We’re in Japan! He has spoken at the headquarters of the United Nations Population Fund, Yale University, and Facebook, as well as many other places. On Instagram he has over 70,000 followers.

But as a child, Nishimura saw Buddhism in a completely different way. As he tells in his memoir, he suffered homophobia at school and was ostracized by his peers. Aware that he was gay, but identifying neither as male nor female, he doubted he could be accepted in Buddhism. Making things more complicated was that both his parents were priests and their family lived in a Tokyo temple of the Pure Land school.

At high school, his life revolved around learning English, the only subject other than art he felt an affinity with, and gay chatrooms on the internet, where he first learned about the experiences of LGBTQ+ people around the world.

Despite initial opposition from his parents, he decided to leave Japan and study in the United States. From his English-language program he went on to art school, and from that to becoming a professional makeup artist, eventually working at the Miss Universe competition. At the same time, he discovered a world of diverse LGBTQ+ identities and came out as gay.

But at the age of 24 he made a big, and perhaps surprising, decision – to return to Japan and train as a monk. Nishimura explained his reasons to the London audience with a quote from Michelle Obama.

“It is hard to hate up close.”

He wanted to learn about Buddhism and address his “hatred” of the religion face on.

But it was a far from easy option. During a spartan training, novices had to chant until they literally spat blood. If the angle of their bow was slightly incorrect, they would be screamed at. And it was almost impossible to ask questions. The role of trainees was to endure and do as they were told.

Yet Nishimura wasn’t ready to put aside his many questions.

He had been taught that Buddhist liberation was available to absolutely everyone. But in ceremonies where men were expected to perform actions one way and women another, which was appropriate for someone who identifies as neither male nor female (Nishimura identifies as nonbinary but uses he/him pronouns)?

Or, as someone who works with makeup and fashion and who loves clothes and accessories, must he adopt the traditional austere dress of a Buddhist monk? 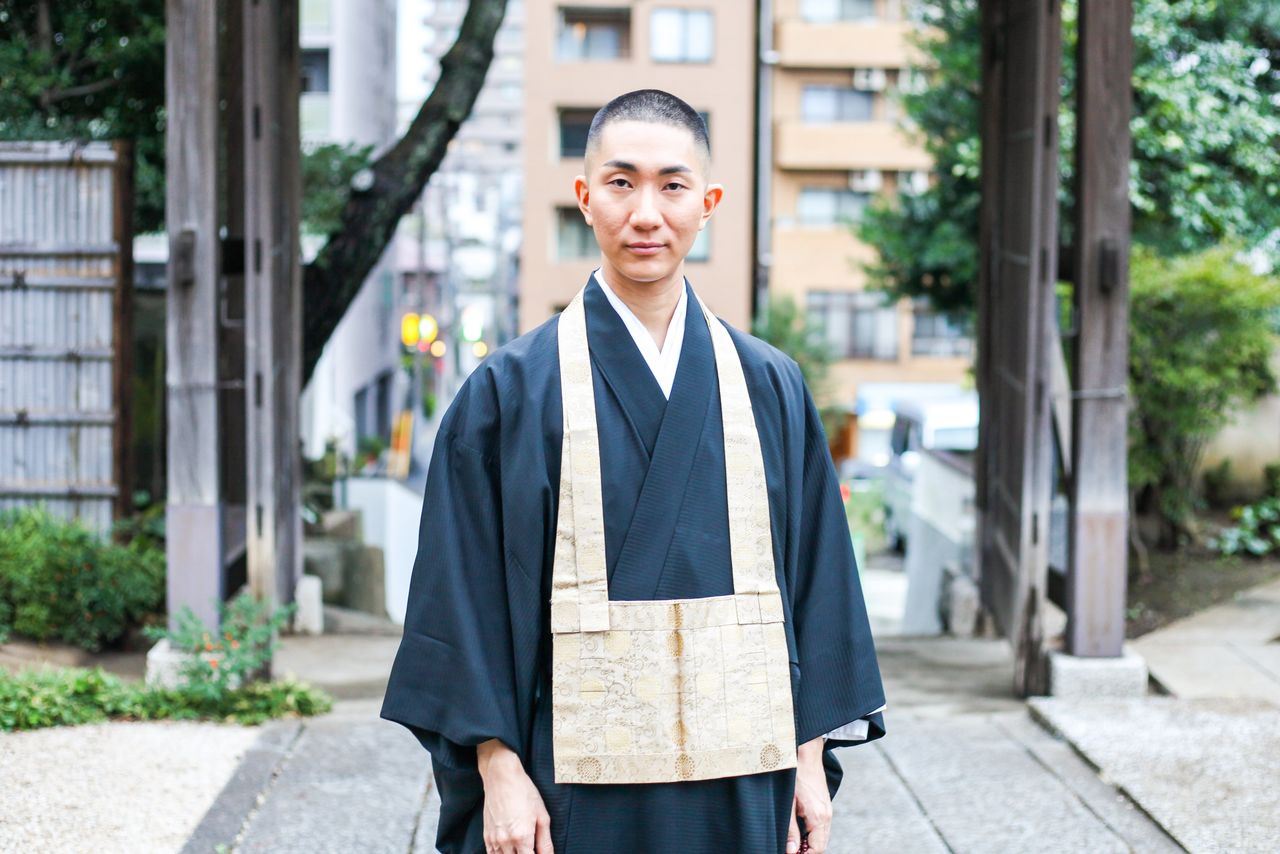 Kōdō felt strongly that he could never accept a teaching that denied his identity. So he decided to ask for himself, as well as for the sake of others.

With some trepidation, he requested and was granted an interview with a senior teacher and posed his questions. But the answers were unexpected. The teacher pointed out that in Japanese Buddhism clerics often have other jobs too—teachers, doctors, even businesspeople.

“What’s the difference between wearing doctor’s scrubs and beautiful clothes?” the teacher asked.

“Your sexuality does not matter. You becoming a monk will be celebrated by the Buddha and the founder of our school,” he said. “Buddhism is something alive and constantly changing. The most important role of a Buddhist monk is to tell people that anybody and everybody can be liberated.”

That is exactly what Nishimura has been doing since finishing his training. And he is using his platform to change attitudes toward LGBTQ+ within Buddhism itself. This includes designing a sticker for temples to display and welcome those with diverse sexual and gender identities. The sticker combines a rainbow flag with praying hands. 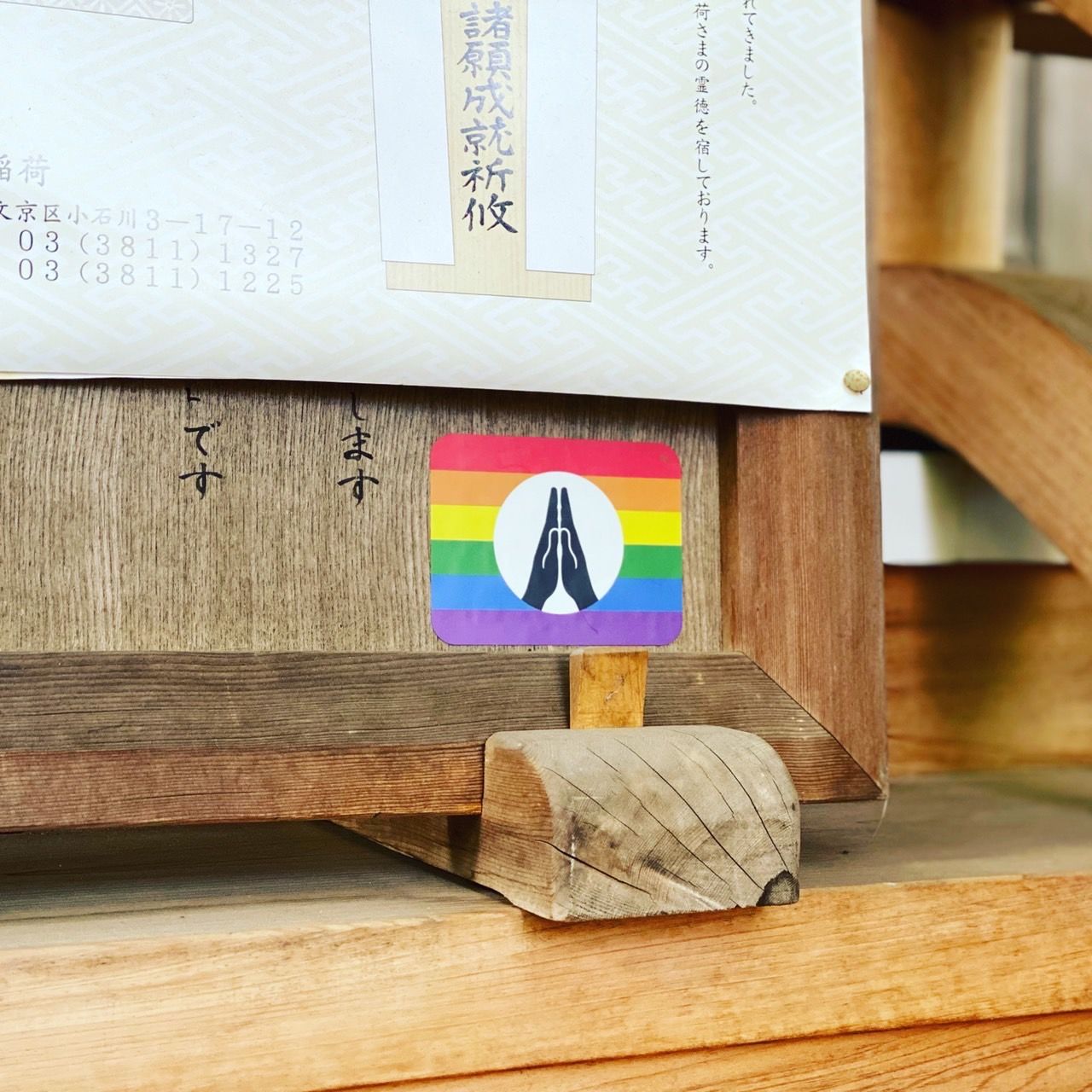 One of Nishimura’s stickers on display at the visitor’s window at a Buddhist temple. (Courtesy of Nishimura Kōdō)

Although Buddhism isn’t as hostile to LGBTQ+ people as some other major world religions, some parts of the teaching can still read very uncomfortably in 2022.

During his talk, Nishimura shared a text from the Pali canon, some of the earliest Buddhist teachings. It lists “women and eunuchs” among those who are “not to be welcomed” by the Buddhist community. He pointed out that this should be taken in the context of the time it was written, not literally today.

On the other hand, Nishimura also finds support for diversity in the Buddhist scriptures. For example, there is the passage in the Amida Sutra that describes a pond of colorful lotus flowers, each shining with their own unique color. Nishimura interprets this as a celebration and validation of diversity.

During the talk he also shared images of Kannon Bodhisattva (Avalokiteśvara in Sanskrit), a popular Buddhist deity in Japan who is depicted at times as male, at times female, and often adorned with gorgeous clothes and accessories.

Nishimura says that he takes the “gender ambiguous” Kannon as his “role model.”

“I used to think that Buddhists were against anything lavish,” he notes, “but there are teachings that encourage people to look marvelous.”

Be Who You Are

The English translation of Nishimura’s book is subtitled “Be Who You Are.” But during the Q&A that followed his talk, someone asked whether Nishimura had ever had doubts about his own identity. Nishimura replied that, despite the pain and struggles when he was younger, “I always knew who I was.” 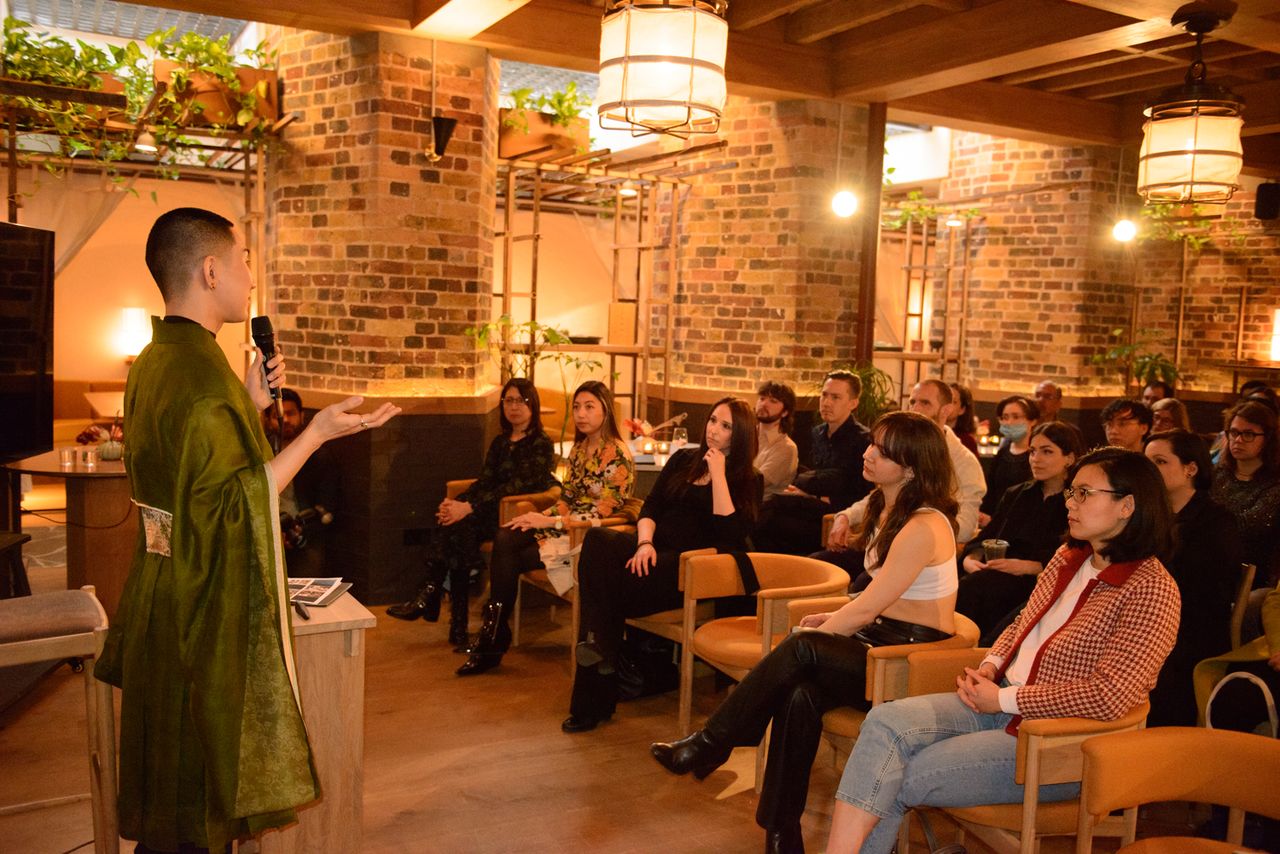 “I think my talent is going against the wind,” he said. “And I can help other people go in the direction they want.”

But as a highly unconventional person in Japan’s homogenous society, and very far from the traditional image of a Buddhist monk, he still experiences hate and discrimination.

During the talk he shared how a friend’s mother once told him to his face that homosexuality was caused by “hormonal imbalances.” It was a formative experience that spurred him on in his activism.

He told the audience how just that day he had received yet another message telling him that “he was not a real monk.”

Nishimura quoted from the Dhammapada, “Conquer meanness with generosity / Conquer dishonesty with truth.”

He told the London audience how he wants to use his platform as spiritual leader to promote tolerance around the world.

“Religion is not there to limit people. It is to help them go beyond their limits,” he said. 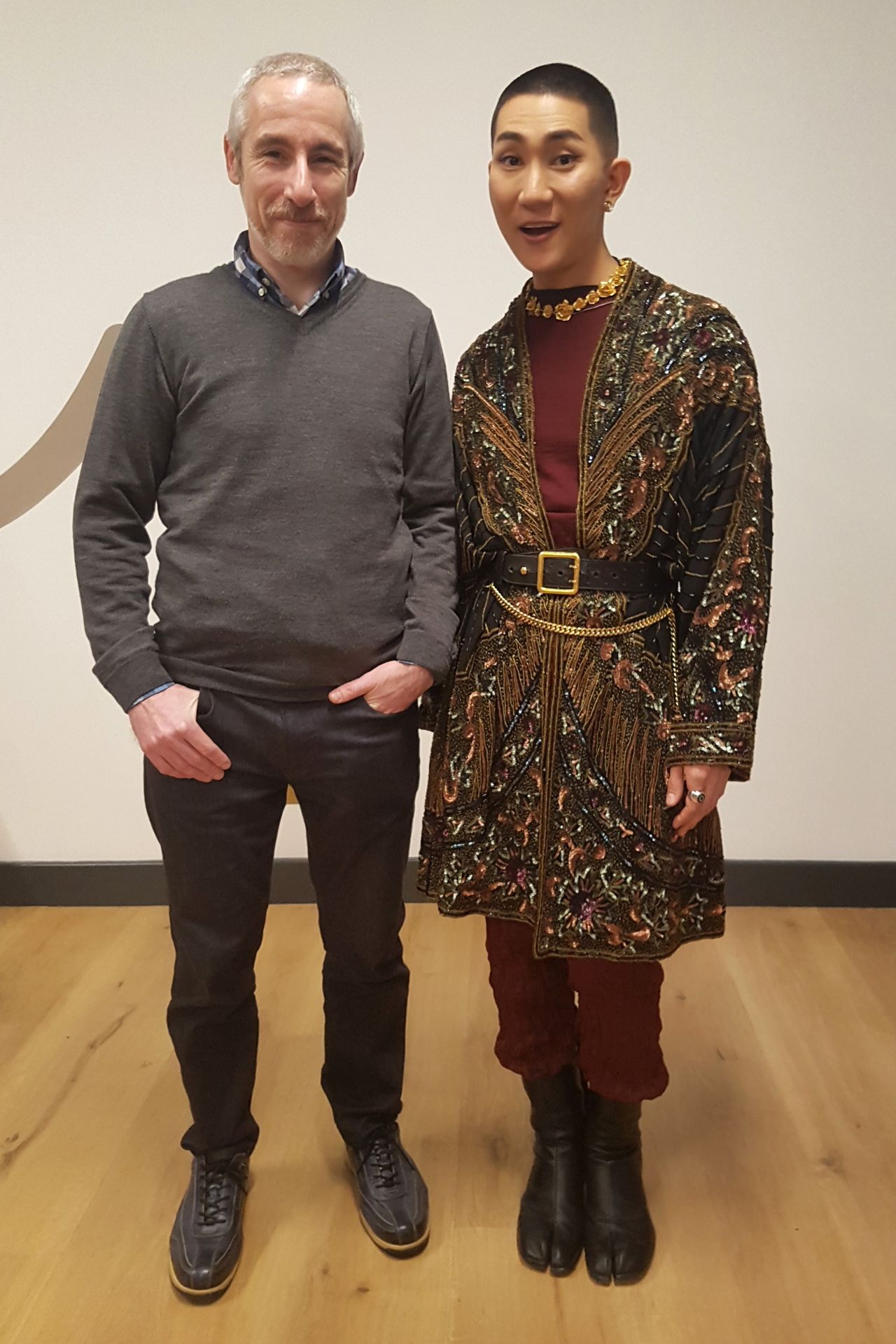 Nishimura poses with Tony McNicol, who translated his book into English. (Photo courtesy of Tony McNicol) 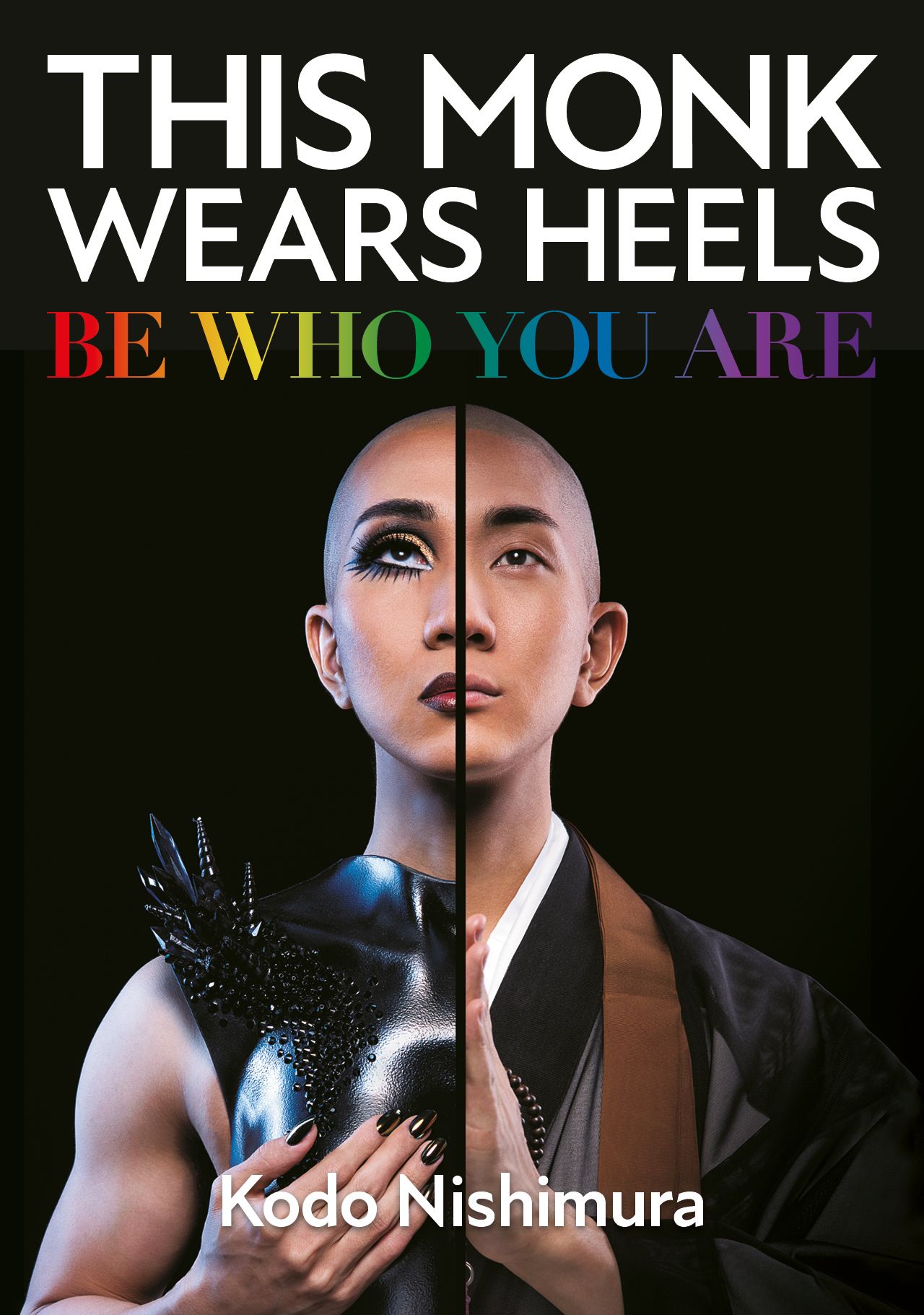 This Monk Wears Heels: Be Who You Are