Society Culture Oct 3, 2011
A key question faces Japan’s mobile phone industry: When will young women make the switch to smartphones? This demographic has driven mobile phone development for a decade or so, and young women’s tastes have inspired only-in-Japan innovations that have given conventional handsets uniquely convenient—and cute!—functions found nowhere else. 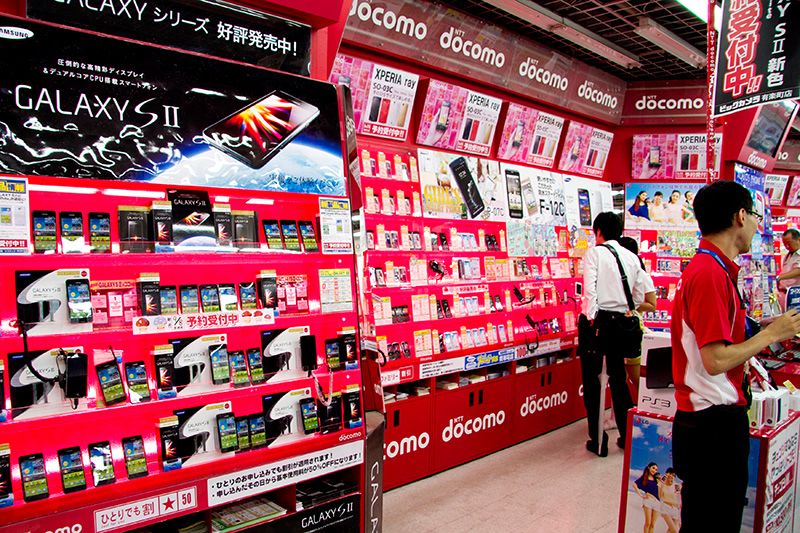 People are calling 2011 the year of the smartphone. In dedicated outlets and electronics stores the length and breadth of the country, displays of the latest computerized handsets dominate the storefront displays—from Apple’s ubiquitous iPhone to devices running the Android and Windows Phone operating systems. At an average cost of ¥50,000–¥60,000 per unit, these new devices are not exactly cheap—but with installment plan payments the norm, sales of the new style computer phones are booming. “Things have really taken off since last year,” says Mochizuki Toshiharu at the Yūrakuchō branch of Bic Camera, a major electronics outlet in central Tokyo. “Since 2010 all the major players have entered the market and there is now a wide range of models for consumers to choose from. The latest phones come with more functions than ever before, and as speed and usability have improved, sales have really started to take off.” There were 10 million smartphone users in Japan by late June 2011, according to digital business analyst ComScore Japan. Impressive enough, you might think—but with a total of 120 million mobile phone subscriptions nationwide, it is clear that smartphones still have a way to go before they can be considered truly mainstream.

At the moment, the market for smartphones is overwhelmingly male, mostly made up of businessmen and gadget geeks. Why are the new devices not more popular with women? After all, women buy at least as many phones as men. Despite the advanced computing power of the new machines, note some observers, there is one crucial area in which they are only now beginning to catch up: for many young women, the models to date have fallen short in the kawaii, or “cuteness,” department.

For many years, mobile phones in Japan have boasted features that come close to rivaling those on the latest smartphones. In Japan, the days when a phone was merely something you talked into ended a long time ago. Today, Japanese mobiles come with email connectivity, cameras, audio playback, GPS, and TV as standard. Phones can be charged with e-money and used instead of cash or cards to pay for groceries and for rides on trains and buses throughout Japan’s advanced urban transport networks. They are fully compatible with blogs and other social networking services like Twitter. There are even special mobile-phone shopping sites where users can hunt for bargains in categories like fashion, health goods, and concert tickets. The online market for mobile phone services is worth some ¥1.65 trillion a year.

Almost as important for many young women, these svelte, stylish phones are not just convenient, but look good too, coming in an attractive range of colors and styles and offering a range of functions and applications catering to the kawaii priorities of young women.

Kawaii culture has had a major impact on the Japanese mobile phone market since portable devices first became widespread in the 1990s. In Japan, girls of high school age were the first demographic to really take mobile phones to heart. Staying in touch with friends has always been a major priority for young women. In the first half of the 1990s, this desire for constant communication turned “pocket bell,” or pagers, into a must-have item for teenage girls who used them to send brief messages to their friends. In the second half of the decade, PHS phones became hugely popular by tapping into the potential of a Japanese technology that allowed data communication even in the subway. Mobile phones grew in popularity by word of mouth, as the girls’ relatives and boyfriends gradually started to latch on to the trend. Mobile phone manufacturers soon started to compete with one another to increase their market share among this key trend-setting demographic. Kawaii was the name of the game. 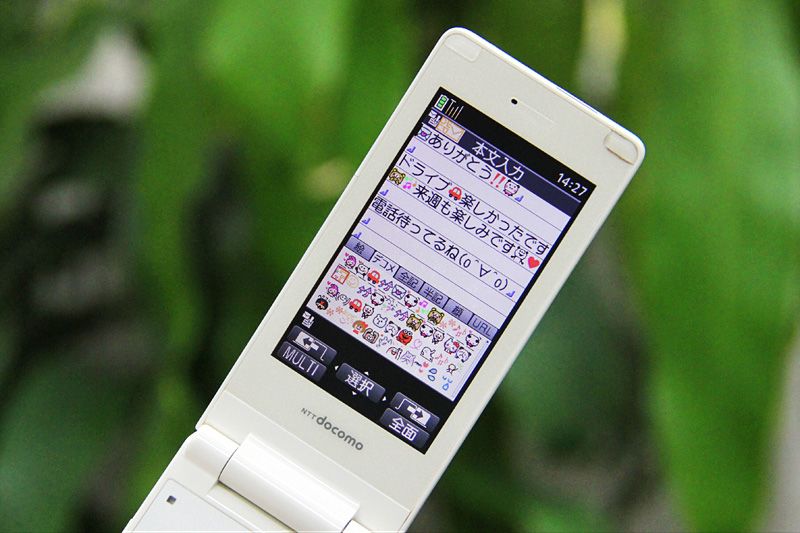 Perhaps the most typical examples of this tendency are the functions that allow users to adorn their text messages with elaborate icons and animated pictures, known as emoji (emoticons) and dekome (decorated mail) in Japanese. Most mobile phones also come with a variety of camera functions to cater to the fashion among young women for sending kawaii-enhanced photos of themselves to their friends. Today, emoji and dekome functions come as standard on just about all phones. Many also come with 8 megapixel cameras and front-facing cameras that allow the user to send photos or video of herself to friends.

Japan’s mobile phone culture has developed hand in hand with kawaii culture, and the market has been driven by youthful, feminine taste since the outset. This fact represents a challenge for new arrivals like the iPhone and Android systems. The iPhone, has proved a phenomenal success around the world, but in Japan its popularity was boosted when the firmware was tweaked to make it compatible with Japanese emoji.

For young Japanese women, kawaii is a key concern. Their inexhaustible appetite for cuteness has spurred major developments on both hardware and software fronts. Since summer this year, a new lineup of smartphones designed to meet the kawaii requirements of this key demographic has started to hit the market. The influence of the esthetic on Japanese telephony is likely to continue as Japan moves into the smartphone age.

The Age of Kawaii Smartphones Begins

A new generation of smartphones started to hit the stores in summer 2011. With a range of functions similar to Japan’s high-tech conventional mobiles, these new models have been specially designed to meet the demanding kawaii requirements of young Japanese women, offering users a wide range of designs, color schemes, and user-friendliness. Below, we take a look at a few of the models likely to prove popular with young women.

Product designer Fukasawa Naoto worked on this smartphone running version 2.3 of the Android OS. Features include a tile interface referencing the design used across the Infobar series, a choice of four different color schemes, and sleek, rounded edges sure to prove a big hit with the kawaii set.
(Produced by Sharp; au network.)

This Android 2.3 smartphone can be operated singlehandedly, despite its generous 4.3-inch screen. The touch speed selector allows users to toggle between different menu options with a touch of the thumb—a popular feature with young women accustomed to cell phone interfaces. The home screen and keypad can be customized with an array of decoration options for extra kawaii-ness.
(Manufactured by Panasonic; SoftBank network.)

Ahead of the launch of new devices that meet the expectations of young women, the range of applications bringing a touch of the kawaii to the smartphone world is growing rapidly. Some of these have been released in English versions for the overseas market, and are already attracting fans around the world. Below, we look at four applications that take the user into the winsome, adorable world of the kawaii esthetic. 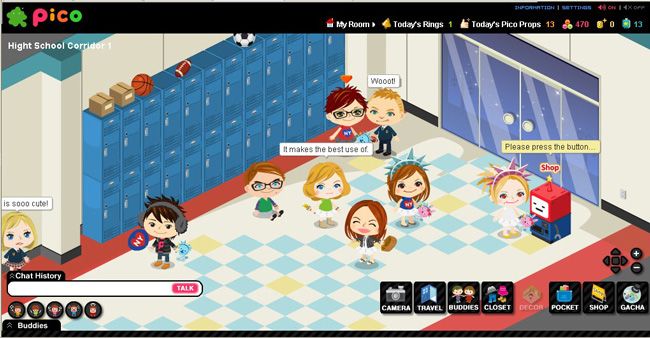 Ameba Pigg is a virtual community application that allows users to create “avatars” that can be used to interact with friends online. The diminutive, roly-poly avatars are hugely popular—in January 2011, the community had more than 6 million registered users in Japan alone. Ameba Pico, an English-language version launched in March 2010, has already attracted 3.5 million users. Following its launch in the United States, the community continues to grow fast today in countries like Indonesia and the Philippines via Facebook.
(Photo: CyberAgent) 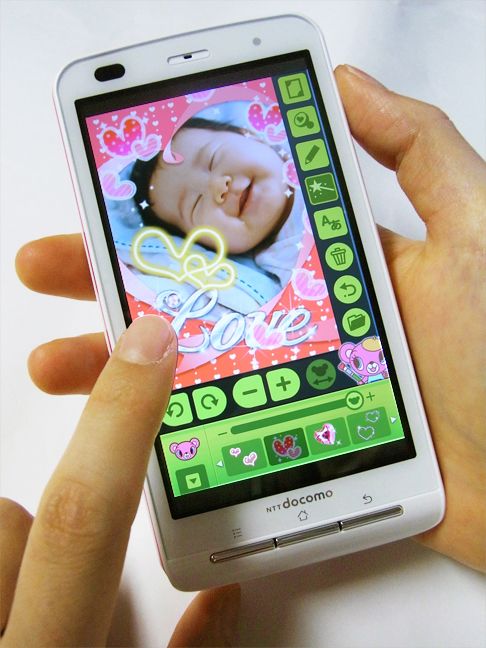 Pripri Marron makes it easy for users to customize photographs with a wide array of effects and tools. Users can use processing tools including shiny stamps and virtual pens and show off their favorite snaps in a unique frame.
(Photo: fonfun)

Decoration me! is an iPhone emoticon application for email. More than 1,000 different emoticons and illustrations are available. These can be inserted into email messages and displayed on conventional mobiles as well as the iPhone. Another feature popular with young women is the ability to paste photo images directly into messages.
(Photo: C.A. Mobile) 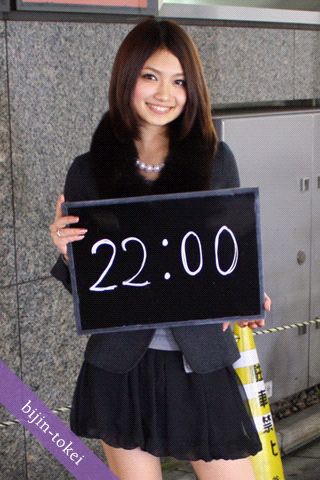 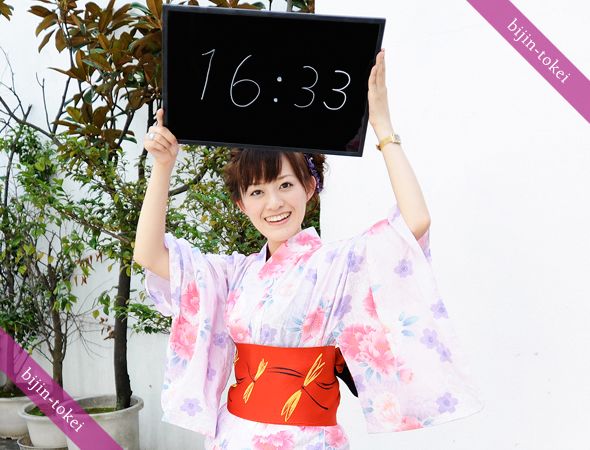 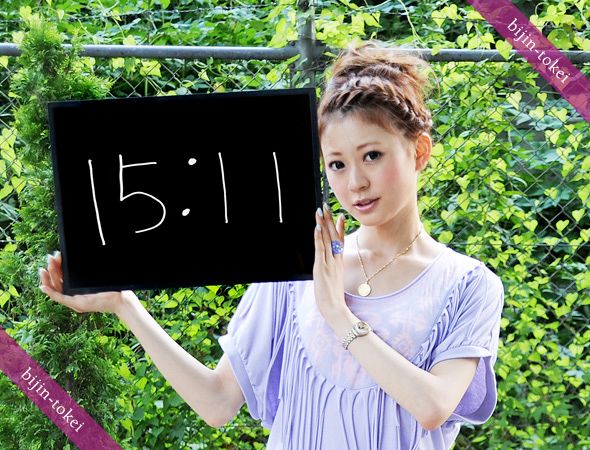 Bijin Tokei (Clock Beauties) is an application that gives men a chance to enjoy the Japanese kawaii esthetic too. Women photographed in city streets all over Japan hold up boards showing the current time. The image refreshes to show a new beauty every minute. Versions shot on location in Paris and Taiwan are also available in the smartphone version. The online edition for computer users currently attracts more than 500 million page views per month. With this application at your fingertips, you can enjoy the kawaii beauty of the Japanese smile every minute of the day—wherever you are in the world.
(Photo: bijintokei)