Culture Jun 6, 2013
Pop singer Kyary Pamyu Pamyu has already hit it big in Japan, but now she’s aiming to build her fanbase overseas. Here we interview a Japanese reporter living in Paris to find out how Kyary’s brand of kawaiii is viewed in France. 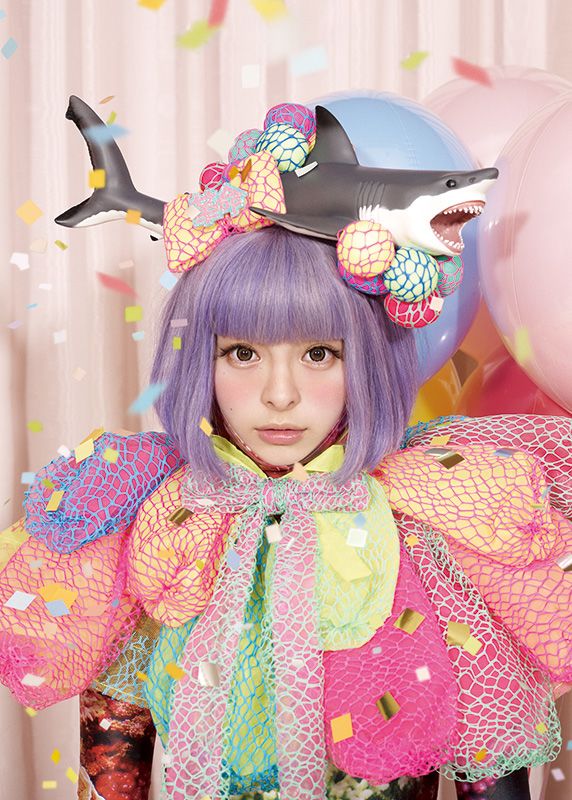 One pop artist who hit the big time last year was Kyary Pamyu Pamyu. The young female recording artist had a stellar year in 2012, culminating with her appearance on the popular New Year’s Eve music program Kōhaku utagassen, which airs annually on the national public broadcasting channel, NHK.

And this year, too, Kyary went from strength to strength, with no sign of slowing down.  Her “100% KPP World Tour 2013” from February to late May took her to Europe, North America, and Asia.

On February 10, Kyary performed at the La Cigale theater in Paris, built in the nineteenth century. This historic venue, where Jean Cocteau once staged his avant-garde theatrical pieces, has showcased such pop giants in recent years as Kylie Minogue and the Red Hot Chili Peppers.

For Kyary to perform at such a legendary theater at the tender age of 20 is quite an achievement. And the day after the concert, she appeared on the popular French variety program Le Petit Journal on the Canal+ channel. 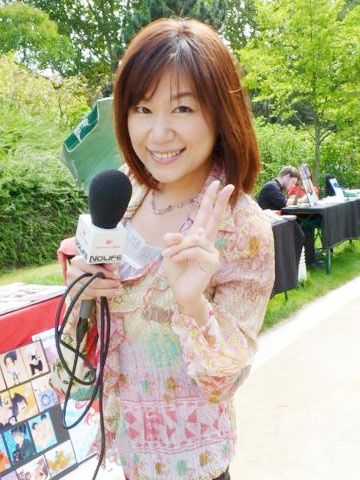 Suzuka—born in Tokyo. A translator, writer, reporter, MC, and staff member of the French cable and ADSL television network Nolife, covering Japanese otaku culture. Has become something of an idol among French men who are into Japan. Her first book, "Paris Japon," was released by the publisher Christine Bonneton in 2011.

What did pop fans in France make of Kyary and her music? To find out more we sat down with Suzuka—a Japanese resident of Paris who covers otaku culture for the cable and ADSL television network Nolife.

INTERVIEWER  How was attendance at Kyary’s performance in Paris?

SUZUKA  Kyary is gaining popularity here in France, but when the tickets went on sale, it wasn’t a same-day sellout. I think interest in her is just starting to grow. Considering that J-Pop is still largely unknown among regular French people, I think she did really well. The first time that she performed in France was in July 2012. That was a free event and it was a big success; many people had to be turned away at the door because the venue filled up so quickly. If the tickets had been a little cheaper this time, we might have seen something similar.

INTERVIEWER  I’ve heard reports that J-Pop is popular in France. is this true?

SUZUKA Hmm . . . [Smiles wryly]. Actually, our J-Pop television program has had a hard time building audience ratings. We can’t beat the video-game programs. But it is true that Kyary is one of the most popular J-Pop artists. We’ve been playing her video clips. There have been five of them so far, and all of them shot up to our top ten immediately and eventually entered our Hall of Fame by spending at least seven consecutive weeks in the top twenty. Her latest song, "Ninja Re Bang Bang," is also really good and will no doubt enter our Hall of Fame too. 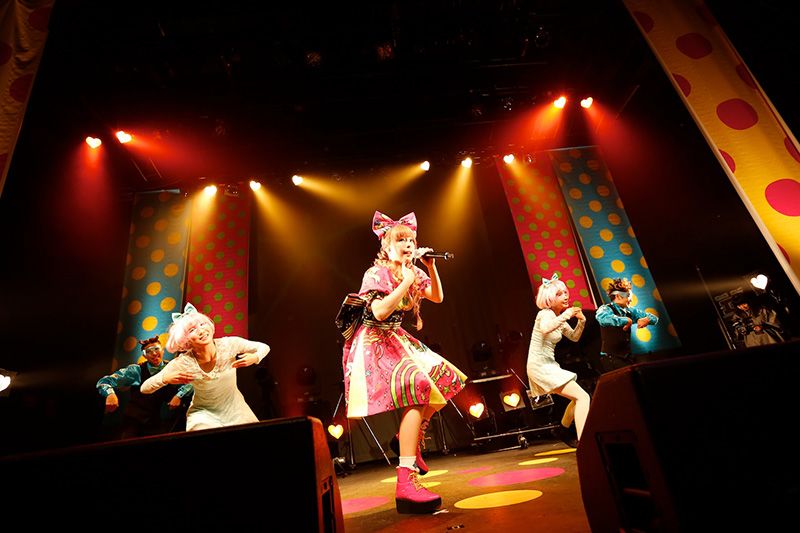 INTERVIEWER  What’s the secret of her success?

SUZUKA  I think it’s her way of looking at things and her fashion sense, both of which extend far beyond J-Pop. The art director for her videos is Masuda Sebastian, who really brings out Kyary’s appeal. But her concerts don’t quite seem able to capture the fine-tuned “world of Kyary” that appears in those videos.

INTERVIEWER  That sounds a bit harsh!

SUZUKA  It’s only because I think she has so much potential! [Laughs]. Either way, this was the first performance for Kyary on her own—she’s just getting started. She and her dancers are unique and they put on quite a show. The French audience joined in the fun by dancing and clapping their hands to the beat. You probably saw the video of the French boys in the front row who did the wotagei dance routine.(*1)

Popular Off Stage Too

Kyary Pamyu Pamyu at the Harajuku Kawaii Festival. As an ambassador for “Harajuku kawaii” she chooses to wear comparitively plainer outfits when she is off-stage. On the right, Kyary makes a rare appearance with another pop idol, Nakagawa Shōko—or Shokotan as she is also known (at Harajuku Quest Hall, Tokyo).

SUZUKA  Another thing worth mentioning about Kyary is her endearing personality. I was the MC at one of her events in Paris, so I was able to spend some time with her backstage. I remember that she was eating these gummy candies and was just adorable. She came across as a very nice young lady. Even when talking with a 40-something (like me!), she chatted in a warm and friendly way and even fixed my dress for me—despite probably feeling really tired and jet-lagged. Even though she’s hit it big in Japan, she was humble and considerate to everyone around her. Her staff and the journalists who cover her love her so much that I felt that this may be one of the reasons for her success.

A display at the Harajuku Kawaii Festival. Kyary has appeared in commercials promoting all sorts of products, ranging from earphones, sweets, and color contact lenses to smartphones and cars.

INTERVIEWER  The fans you interviewed at the Paris concert kept saying kawaii when talking about Kyary.

SUZUKA The word kawaii isn’t as widespread in France as say, sushi, or karaoke, but among people who are interested in Japan, it’s about as well-known as arigatō and sayonara. It’s not used to simply mean cute, or mignon in French. Rather, the word seems to be used specifically in relation to Japanese pop culture.

A New Take on Kawaii

INTERVIEWER  I think that even in Japan, when young people say kawaii, sometimes the older generation doesn’t exactly understand the way they are using it. Would you agree? 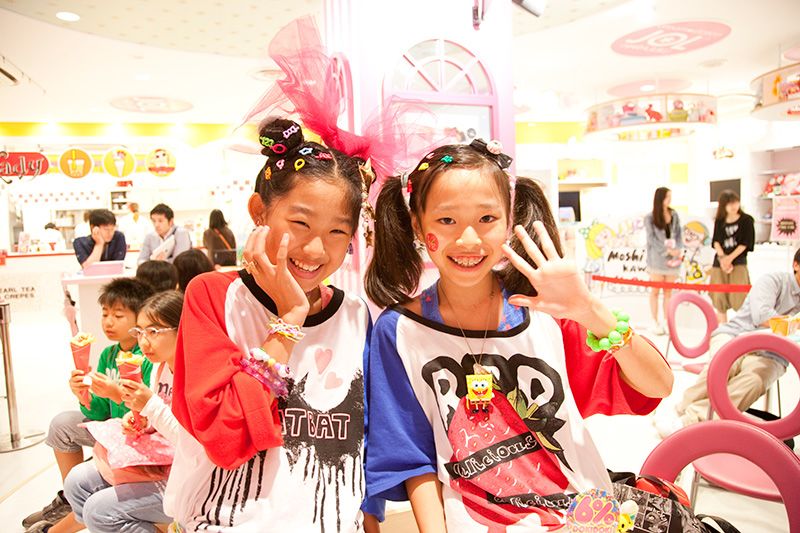 Twelve-year-olds Rina (left) and Yume, interviewed in Harajuku, are huge fans of Kyary. “We’re not interested in idols that all our classmates like. Kyary’s different from everyone else. And her sometimes creepy style is really interesting.”

SUZUKA  When Kyary appeared on French television the other day, she explained the meaning of kawaii to the presenter and the viewers. I thought what she said made perfect sense and I think it was easy for the French people to understand, too. She said that while there are many forms of kawaii, her particular kind combines cuteness with elements that are more subdued or even a bit creepy.

One of fashion trend that’s become quite popular among young French women who like Japan is the “Harajuku Lolita” look. They dress up with ribbons in their hair, wear frilly pink clothes adorned with stars and hearts, and carry around teddy bears or sweets. Normally, it is the sort of look that a young girl would be attracted to. And in France, most people think that a grown woman should ditch the “cute” for something more appropriate to her age. But French women who are into Japan are happy if someone describes their look as being kawaii. Of course, among the ordinary French person that Harajuku Lolita look seems pretty creepy.

INTERVIEWER  The kawaii look seems to strike many French people as overly suggestive.

SUZUKA Certainly some in people in France are a bit disturbed by the infantile side of the image of Kyary or Masuda Sebastian. But there is more to their look than that. They’ve also mixed in gothic fantasy elements—imagery like skulls and crossbones, eyeballs, blood, and studded clothing. The gothic look is well-recognized in France and has a following among young French people. And by combining that with cute elements, Kyary and Masuda have come up with something new.

The French think that it’s cool to be different. When they saw Kyary Pamyu Pamyu combining cute with gothic, they were probably thinking, “I haven’t seen this before!” So I think it had a strong impact.

Photos from the Harajuku Kawaii Festival 2012 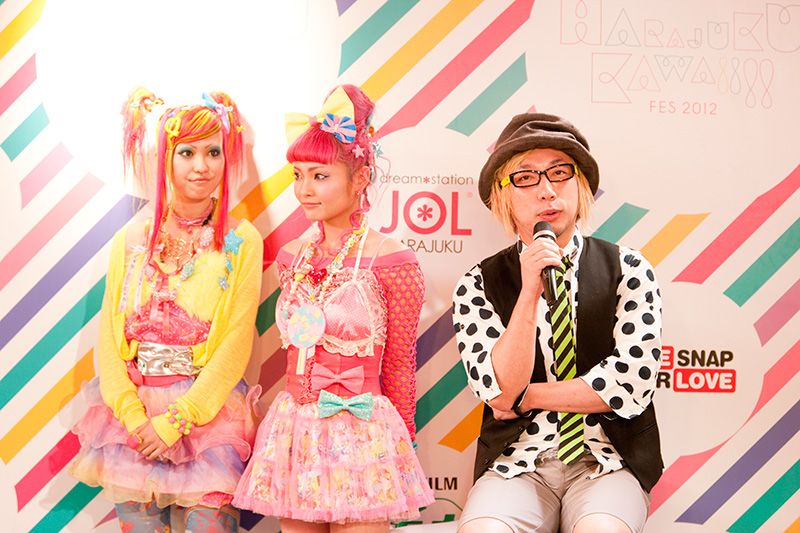 Masuda Sebastian: “Since Kyary’s debut, I think Harajuku culture has come to be more  widely accepted.” 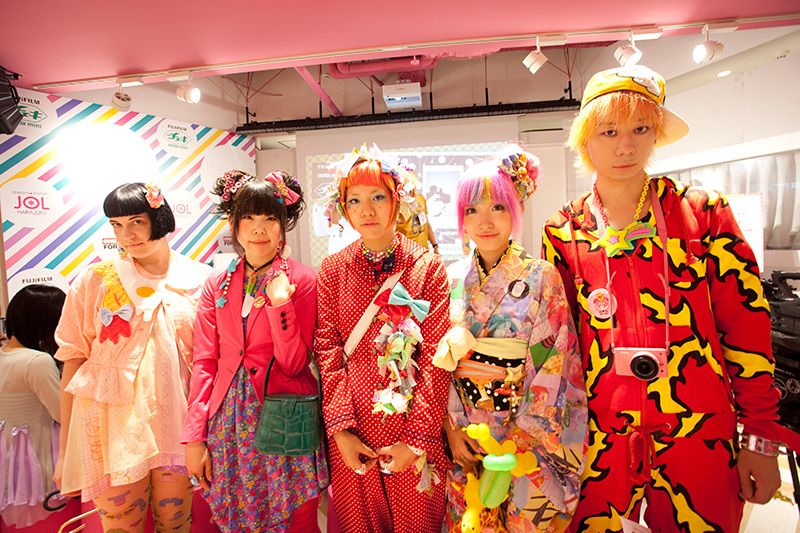 Some of the regulars inside the “6% Dokidoki” shop, produced by Masuda: (from left) Caro, Chami, Ribon, Kumamiki, and Junnyan. 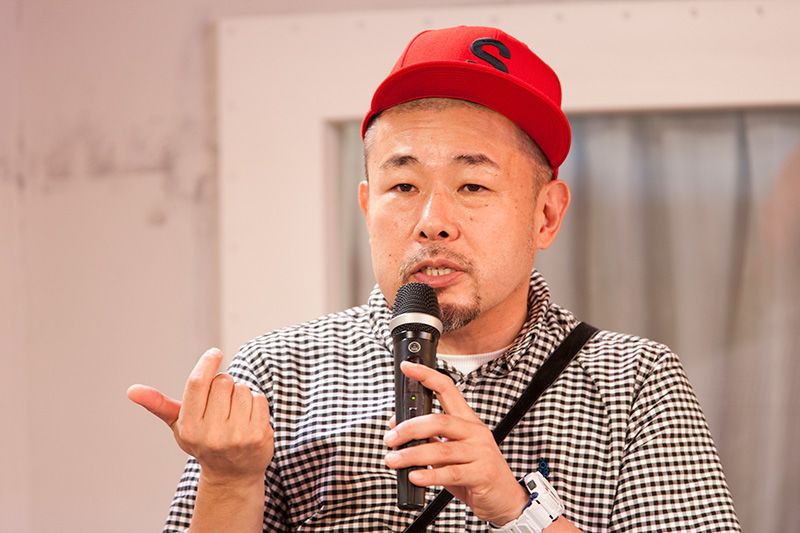 More photos in the gallery below: 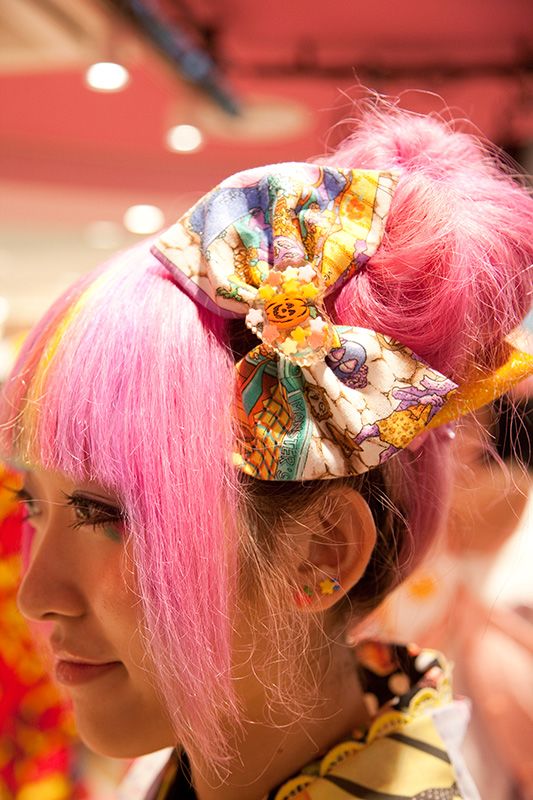 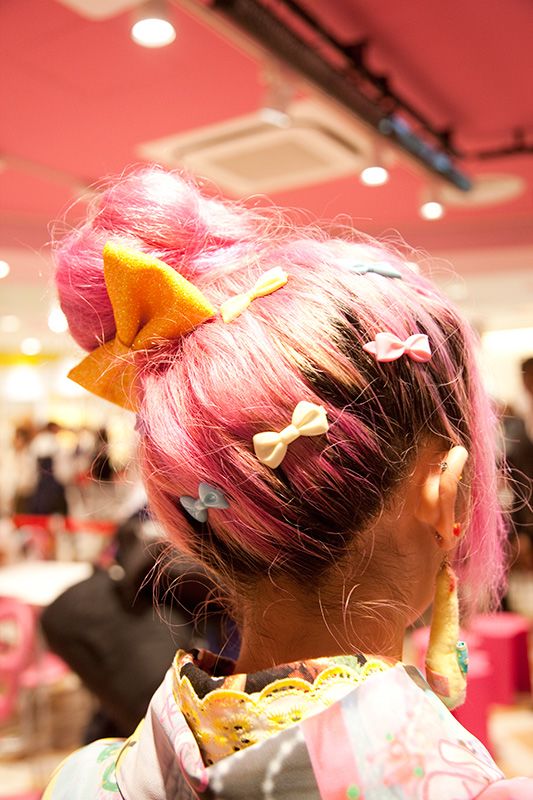 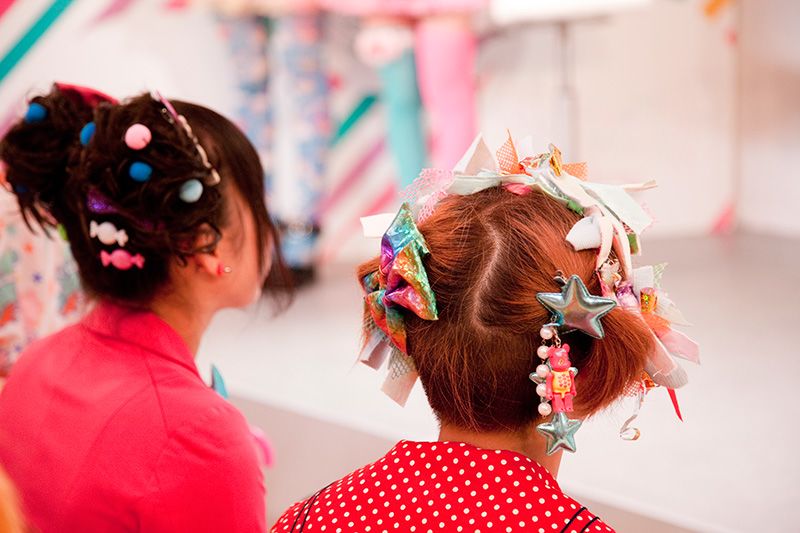 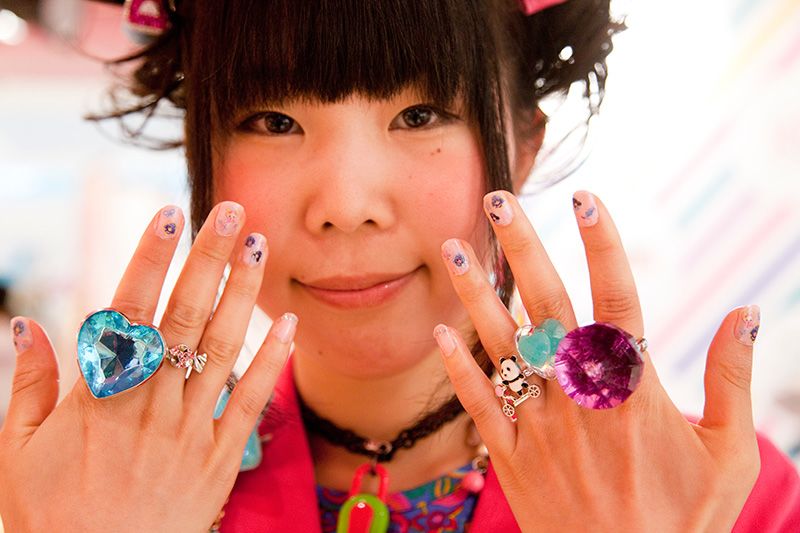 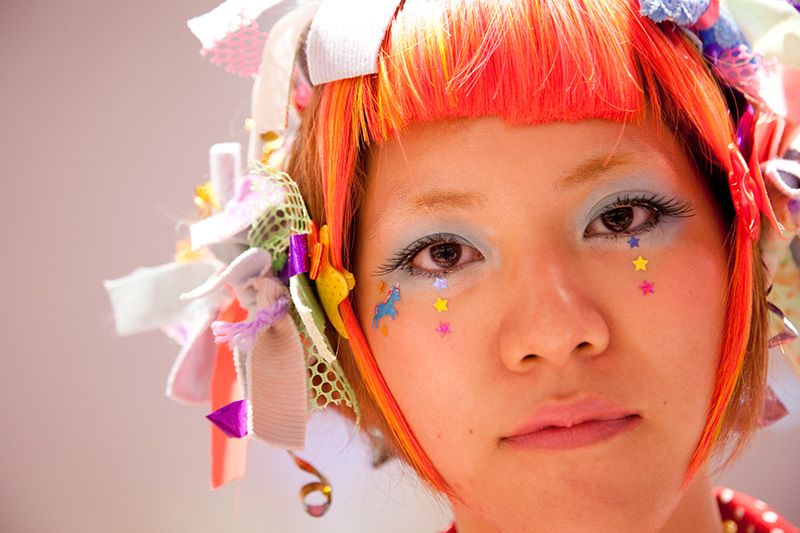 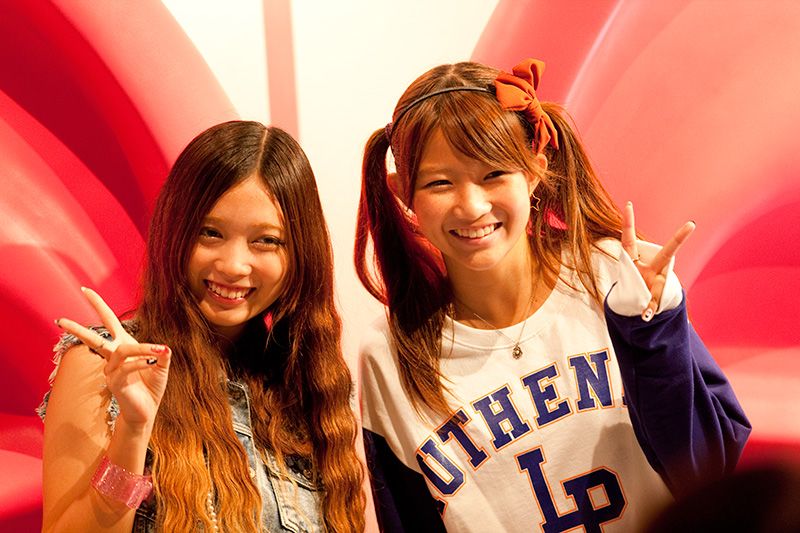 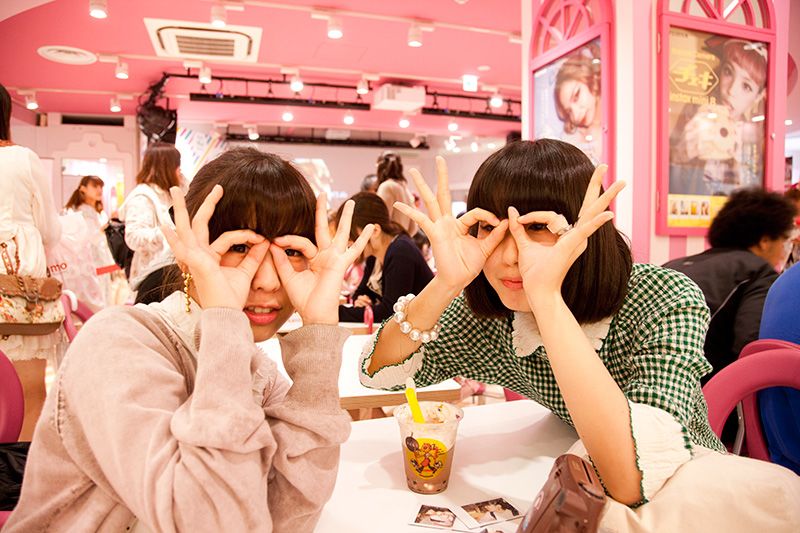 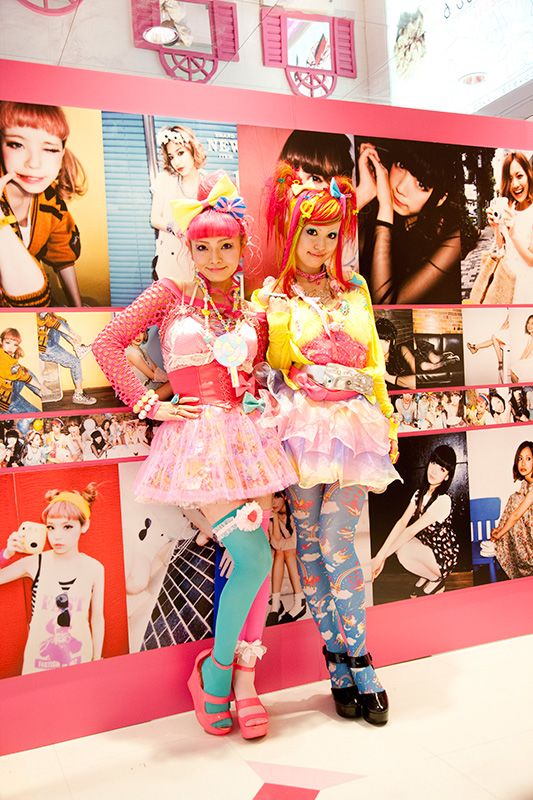 (*1) ^  Wotagei dance is a popular otaku dance routine sometimes seen at concerts of Japanese idols–click here for a demonstration.