How Can Harajuku Get Its Groove Back?

Society Culture Mar 5, 2012
Harajuku in Tokyo is known around the world as a street-fashion Mecca. Yonehara Yasumasa has kept a close eye on the neighborhood’s street life, snapping photos with his Cheki instant camera. Here he speaks his mind about how commercialism has dulled the Harajuku style and what it will take to revive youth culture there.

Model and pop star Kyary Pamyu Pamyu goofs off for the camera. 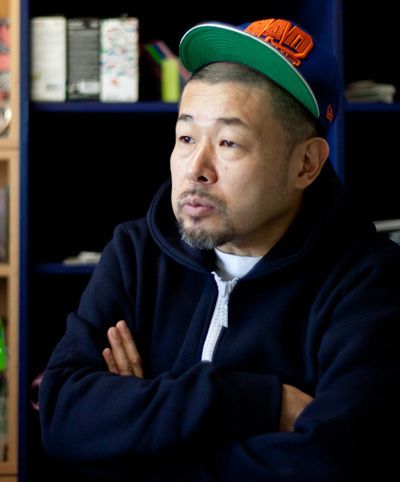 YONEHARA Yasumasa
Editor, creative director, and photographer. Born in 1959 in Kumamoto Prefecture. Began tracking the gyaru (girl) subculture in and around the Shibuya area of Tokyo in 1995 as the creative director of the magazine Egg. He later created the photo-contribution magazine Aufoto (Out of Photographers) and the magazine Smart Girls. His focus remains the street fashion of young women in Tokyo. His photography and other activities take him to the United States, Europe, and other areas around the globe.

INTERVIEWER You’ve been living in Harajuku for quite some time now.

YONEHARA YASUMASA That’s right. I set up my office in the neighborhood back in 1995, so it’s been around sixteen years. For some time now I’ve been tracking youth culture. Around the mid-1990s things were getting interesting in “Urahara,” as the area of back alleys and streets off the neighborhood’s upscale main drags is called. That was when independent fashion boutiques in Urahara started to open, one after another, capturing the attention of street-fashion producers. I decided to set up camp in Harajuku so I could keep a close eye on the latest developments.

INTERVIEWER In terms of its trendsetter status, I get the impression that Harajuku has undergone a lot of change in recent years.

YONEHARA Harajuku got its start as a fashion center thanks to the culture built up by the pioneers in the neighborhood. It began well before 1995, when the Takeshita shopping street leading from Harajuku Station became a sort of tourist trap. That transformation led creative types to ditch Takeshita in favor of places more off the beaten track. And so the Urahara scene was born. Along with the imaginative youth leading that scene, though, there were always a lot of adults hanging out there too and buying stuff. This is basically what the Harajuku area is like today, too.

Back in those early days of the scene, there weren’t so many shoppers in Urahara, but there were lots of little shops that did well enough to stay in business. Eventually people flocked to the area because of that concentration of those little boutiques. Some of the adults looking in from the outside figured that if those boutiques were attracting so many shoppers, opening even bigger stores would draw even more people in. This led to higher rents, driving out the creative young people. Before you knew it, there the streets were lined with foreign chain-store outlets, so you basically could have been in any other city in Japan—or the world, for that matter. This is the sort of homogenization that Harajuku has undergone. 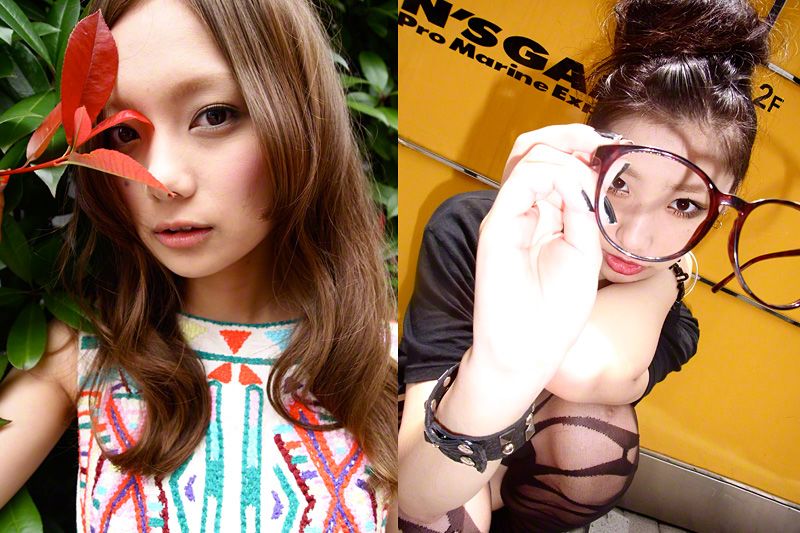 INTERVIEWER When did that transformation take place?

YONEHARA During the past three or four years the change has become really noticeable. It seems to me that the transformation is now reaching a final stage. The same sort of thing could happen in any country, I suppose. What makes the situation even worse, though, is that all sorts of cheap goods can be found in Urahara now—the sort of stuff you’d expect to find in some down-market shopping mall. Don’t get me wrong: I’m not saying inexpensive apparel is bad. It’s just that some magazines are claiming celebrities wear this stuff, when in fact no Hollywood star would be caught dead in such discount threads. It’s just publicity. And consumers who fall for it don’t realize how impoverished their own fashion sense is. 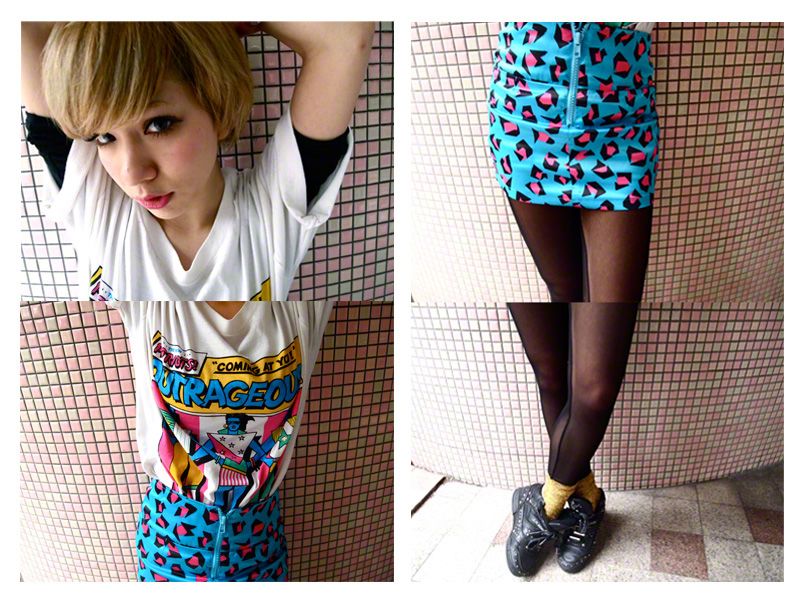 The model Una shows off an eclectic look.

Where Is Japanese Fashion Headed? 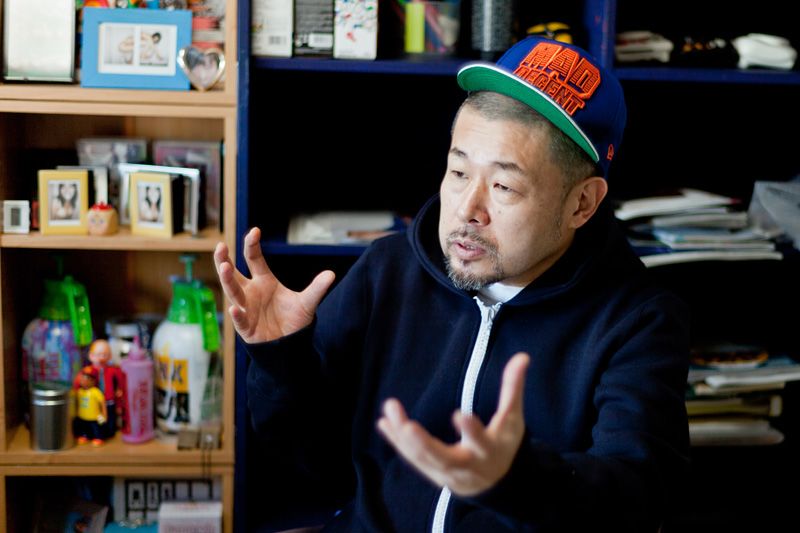 YONEHARA The earlier generation of young people overlooked the cultural aspect of fashion and ended up jumping from one trend to the next as consumers. Today’s youth took a rather dim view of the embarrassing antics of their predecessors, who lost their own identifies in that pursuit of the latest thing. They don’t want to fall into that same trap. [Laughs] This situation might explain why young people now often prefer plain items in subdued hues. My impression is that they aren’t doing that out of a desire to be like everybody else. Wearing this plain look is a way to avoid having adults call all the shots for them. I guess you could say that their lack of interest in fashion is the best way for them to avoid getting co-opted by the adult world.

You often hear complaints these days that fashion magazines aren’t selling well because of this indifference toward fashion. But if you consider that most of the magazines geared to youth are put together and sold by forty- or fifty-year-olds, then it isn’t at all surprising that the sales are flat. Those editors and salesmen can only create the sort of content they’re familiar with.

I’m always telling people that Japan has become a society saturated with the outlook of middle-aged men. Those guys are the ones in charge, even though they don’t have a clue about what’s going on out there. Whatever ends up getting made is only the sort of stuff that the typical middle-aged man can get his mind around. So the media coverage of Harajuku ends up conveying an image of the neighborhood that doesn’t correspond to reality, and the result is that only the most superficial fashion ideas get pursued. It makes it really hard for a true youth culture to take root.

INTERVIEWER Does today’s fashion scene attest to the lack of that cultural essence?

Yamauchi Ayumi punked out in an elevator.

YONEHARA It gets pretty confusing for people to try to track down what that “essence” might be, exactly. So, instead, everybody in the business chases after easy-to-understand fashion trends. The basic logic is that as long as you latch onto the latest fad, you can at least turn a profit. And once a hot trend cools off, you look around for the next one that’s heating up. There’s no consistency whatsoever in this approach. I tend to avoid the fashion shows put on by big-name brands because it’s become so hard to tell them apart. With so few differences, it isn’t surprising that people gravitate toward whatever has the cheapest price on its tag. 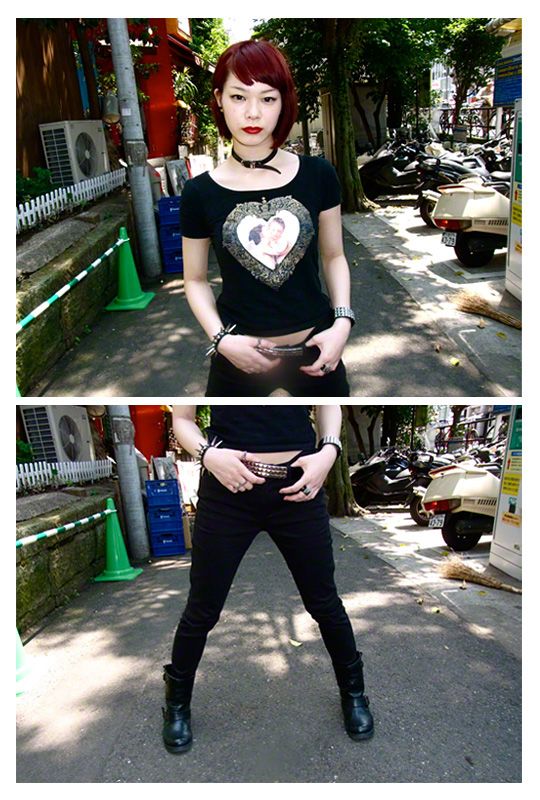 Mikami Misaki on a shopping street in Harajuku.

Another factor at play is that foreign culture tends to be idealized in Japan, particularly by the media. This has made it easier for foreign designers to make inroads in Japan. Some might say it’s the result of globalization, or free trade pacts, but as far as I can tell the media has paved the way for this situation. South Korea and China are on a roll these days because the governments in those countries are making a real effort to provide support and get the word out about their own cultural trends. Look at the pop culture in South Korea, for example. It made inroads into China by way of Japan. But now it bypasses Japan altogether and flows straight into China. And for the past year or so the Chinese have been producing their own Korean-informed pop culture.

Around the time that Harajuku was all the rage, people from around the world descended on the neighborhood. They were all imitating the style of Japanese people. Japan totally missed the boat when it came to using that golden opportunity to actively promote its own pop culture. And, even worse, Japanese people ended up chasing after the American, European, and Korean pop trends instead. Our pop culture was a trendsetter for Asia from 1995 to 2005, but since then it has made very little impact outside Japan. We haven’t been making any progress overseas in a period when the domestic demand is also sluggish. And now, with the pressure of the strong yen, we’re waking up to the fact that Japan is really in dire straits. 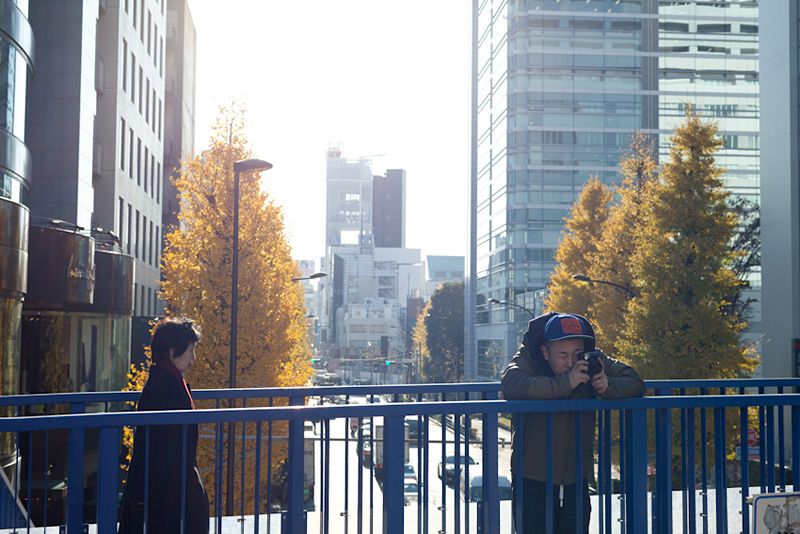 Harajuku Girls Poised for a Comeback?

INTERVIEWER Last summer you released a photo collection, Harajuku Kawaii!!!! Girls. What was your aim in putting this out at a time when the neighborhood scene seems to be so slack?

YONEHARA I’ve kept a close eye on the latest happenings in the so-called gyaru subculture that emerged back in the late nineties. At first it was truly a new subculture, created by the young women themselves. Unfortunately, those middle-aged men I was talking about earlier showed up and cashed in by commodifying everything. Fueled by media attention, the style went mainstream, getting all caught up in consumerism, and this dried up a subculture that had been born out the healthy rivalry between those highly individualistic young women.

One trend that has popped up as a reaction to the mainstream gal fashion these days is the existence of “magazine-reader models”—those young amateurs who are chosen to appear in the pages of their favorite fashion magazines. Instead of just buying a prepackaged look, these young women are into creatively arranging items in a way that suits them best, creating new styles all their own. This has opened up chances for ideas to flow back and forth between models and the magazine readers. It’s about more than just fashion and the latest trends because each woman is also expressing her whole approach to life and way of thinking. I’d say that the way these amateur models are tweaking their look, with this or that minor change, is a key aspect of the Japanese fashion world—and indeed, of Japanese culture as a whole.

From left to right: models Shirakami Moemi, Akira, and Machiko.

INTERVIEWER So Harajuku still has its reputation as a place where young women with strong personalities hang out?

YONEHARA It might be a bit precarious but I think Harajuku has managed to just barely hold on to that trait. And there still seem to be some “grown-ups” in the neighborhood who like young people who display individuality and try to support them. Those weird adults—like me—haven’t disappeared yet. [Laughs]

People generally say that youth these days are lacking in personality, but I’d say it’s because of a lack of adults to convey to them the value of fostering and expressing themselves. The same applies to the political world, too. Politicians preserve their careers by being careful to not reveal what they really think. What young people are really looking for, though, is the sort of relationship with other people that lets them be themselves. This is probably why we are seeing a resurgence of young women with sharp personalities. 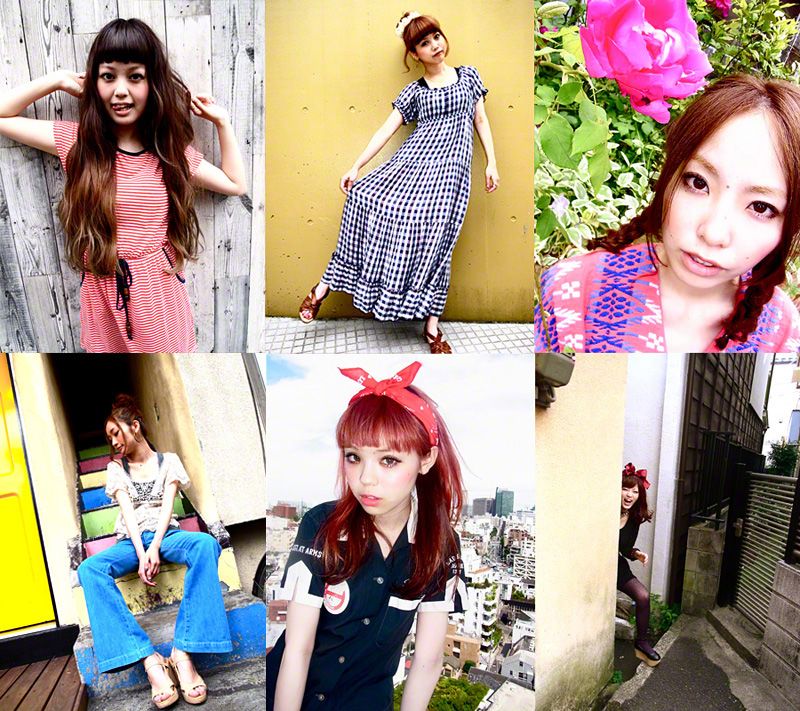 INTERVIEWER You’ve exerted a big influence outside of Japan. What do you want to convey to people in the future?

Yonehara’s photos featured in this article are selected from those not released in his book Harajuku Kawaii!!!! Girls (published by Gain).

YONEHARA I’d like to keep on doing what I’ve done up to now. To get the word out about the interesting things young women in Japan are doing. Basically I’d like my photographs to capture the moments when those girls are creating something new. I’ve seen many cases where they can get caught up in commercialism, turning things upside down, and I’d like to create a sort of place where that doesn’t happen. I’m even toying with the idea of starting up a magazine this year. I’d like to see a publication where the content isn’t all about buying things. Of course it’ll be a bit tricky to figure out how to turn a profit while following that approach. [Laughs] 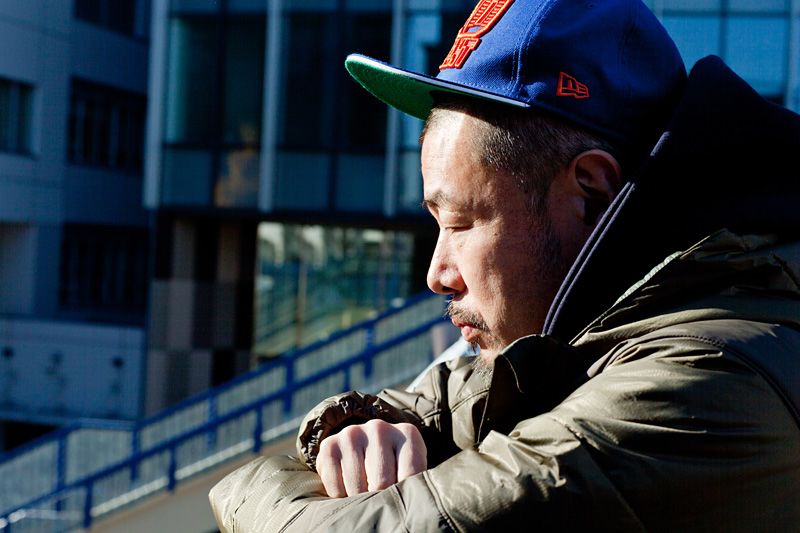 (Originally written in Japanese. Photographs of Yonehara by Igarashi Kazuharu.)