Culture Apr 5, 2016
Mizuki Shigeru, who passed away in November 2015, is known for the many yōkai (natural spirits) that appear in his manga works. Statues of these characters and other themed attractions now draw tourists to Mizuki’s hometown of Sakaiminato in Tottori Prefecture.

In 1943, a young Japanese soldier was recuperating from malaria in a field hospital in New Guinea when the infirmary was hit in an Allied bombing raid. He sustained injuries that led to him losing his left arm. This was one of many near encounters with death during World War II, yet he lived on for more than 70 more years before passing away on November 30, 2015, at the age of 93.

By that time, Mizuki Shigeru (born Mura Shigeru) sat atop Japan’s manga world as one of its foremost creators. He is known principally for the cast of yōkai, or natural spirits, that populate his hit comic series Gegege no Kitarō, which has been adapted to anime several times, most recently from 2007 to 2009. War was also a major theme for Mizuki, as in the semi-autobiographical work Sōin gyokusai seyo! (translated as Onward Towards Our Noble Deaths), which drew on his army experience.

Remembrance Ceremony for a Manga Giant

On March 8, 2016, a remembrance ceremony was held in Mizuki’s hometown of Sakaiminato, Tottori Prefecture. It took place on what would have been his ninety-fourth birthday, 100 days after he passed away. Attendees included his wife, Mura Nunoe, and other family members, as well as the horror novelist Kyōgoku Natsuhiko, whose interest in yōkai was inspired by the manga writer. Videos and performances reflected on and paid tribute to Mizuki’s life and works.

As a young boy, Mizuki learned about yōkai from an elderly woman named Kageyama Fusa, whom he knew by the nickname Nonnonbā. She helped around his family’s house and looked after the children, fascinating them with tales of the occult. In an interview in late August 2015, Mizuki said that it was grinding poverty—her lack of any food or money to share with her young charges—that inspired her to give them her knowledge of the spirit world instead.

Kageyama died when Mizuki was still in elementary school, but was ultimately one of his most memorable and valuable childhood teachers. His fictionalized reminiscences of her early influence appeared in the 1977 work Nonnonbā to ore (translated as NonNonBa), which received high acclaim. Her yōkai teachings brought most success to Mizuki, however, in the creation of Gegege no Kitarō. 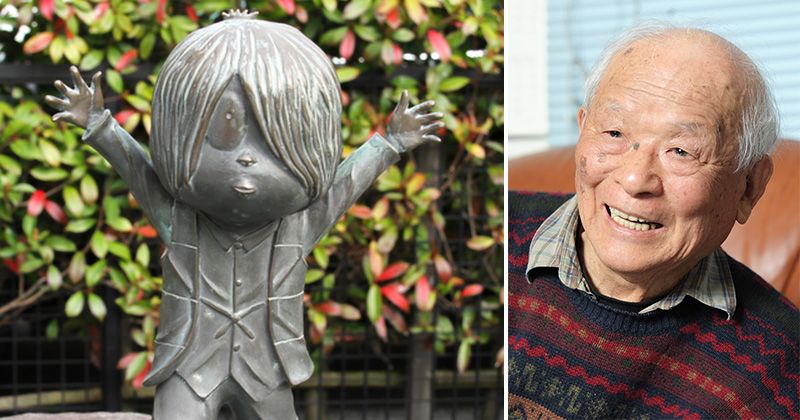 A bronze statue of Kitarō in Sakaiminato, Tottori Prefecture (left), and Mizuki Shigeru in 2010 (right). (© Jiji)

Birth of a Yōkai

Mizuki struggled to earn a living after returning to Japan at the end of World War II. For many years, manga offered him little more than a way of getting by. But this began to change in 1960, when he produced a new work called Hakaba Kitarō (Graveyard Kitarō). This introduced the yōkai boy in the title, Kitarō; his father, Medama-oyaji (called Daddy Eyeball in the 2002 Kodansha International Bilingual Comics edition), a yōkai who originally appears as a mummy but dies early on and returns to life as an eyeball; and another major character, Nezumi-otoko (Ratman). 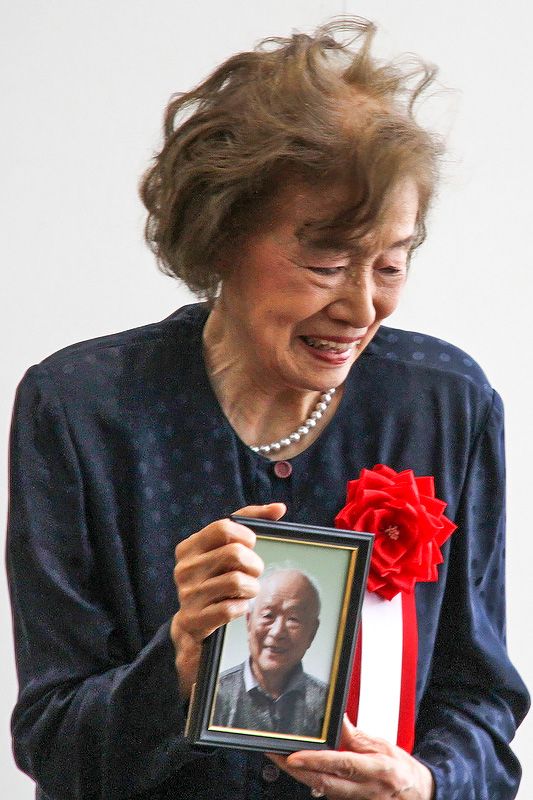 Mura Nunoe holds a photograph of her husband, Mizuki Shigeru, at the renewal ceremony for Yonago Kitarō Airport on March 8, 2016.

The comic became a major hit after it was rebooted as Gegege no Kitarō in 1967. The name was changed to make it more child-friendly and the horror was toned down somewhat, although it was still far from tame. By this time, Kitarō was depicted with one of his most recognizable features: long hair covering his empty left eye-socket. When a televised anime adaptation launched in 1968, Mizuki Shigeru became a household name.

In 2010, the popular NHK morning drama Gegege no nyōbō (Gegege’s Wife) focused attention on Mizuki’s wife, Nunoe. Based on her autobiography, it told the story of their married life, from poverty to success. At the March 2016 remembrance ceremony, Nunoe held a memorial photograph of her husband and shared her recollections of how he would often look from behind, energetic and dripping with sweat as he focused on creating a new work.

Mura Nunoe and other family members were also present at a renewal ceremony earlier the same day at the nearby airport. Known unofficially as Yonago Kitarō Airport since 2010, the facility added to models and illustrations themed around the Kitarō series with a new “Yōkaitachi no mori” (Yōkai Forest) stained glass window, an artwork of a whale airship carrying Kitarō and other characters, and a newly illustrated ceiling.

The mass of artworks and themed products at Yonago Kitarō Airport gives visitors some idea of the importance of Mizuki Shigeru to the surrounding area. But the city of Sakaiminato itself, a 15-minute train ride away, appears to have almost entirely dedicated itself to its most famous son and his yōkai creations, which can be seen everywhere. This extended homage centers on Mizuki Shigeru Road, lined with 153 bronze statues of characters from the manga master’s works. 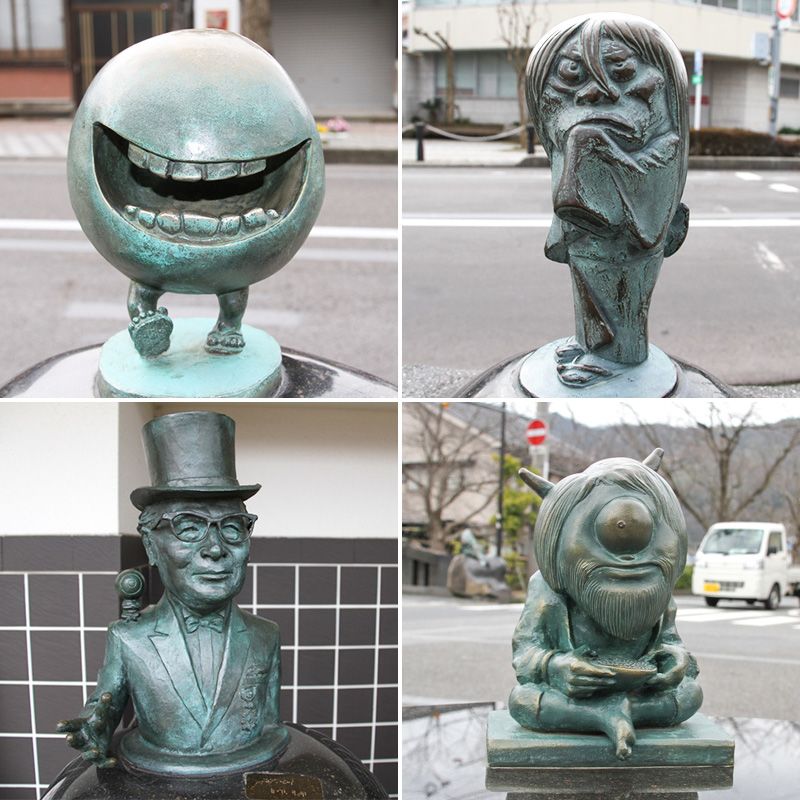 Bronze statues of (clockwise from top left), Betobeto-san, Sunakake-babā (The Sand Witch), Yagyō-san, and Mizuki Shigeru with Medama-oyaji on his shoulder.

Here Gegege no Kitarō stars like Kitarō, Medama-oyaji, and Nezumi-otoko are joined by many supporting spirits from the series. Also on display are characters from other Mizuki works with supernatural themes. These include the schoolboy Sanpei and the kappa (a water-dwelling yōkai) from Kappa no Sanpei, and the boy Shingo and the demon Mephisto featured in Akuma-kun.

The first 23 statues were built in 1993, but it took some time for the area to become established as a tourist destination. In 2007, visitor figures topped 1 million for the first time, buoyed by the release of a new film and anime series. The drama Gegege’s Wife intensified interest in Mizuki to new levels, attracting a record 3.7 million visitors to the road in 2010, although numbers have fallen somewhat since then to around 2 million in 2015. 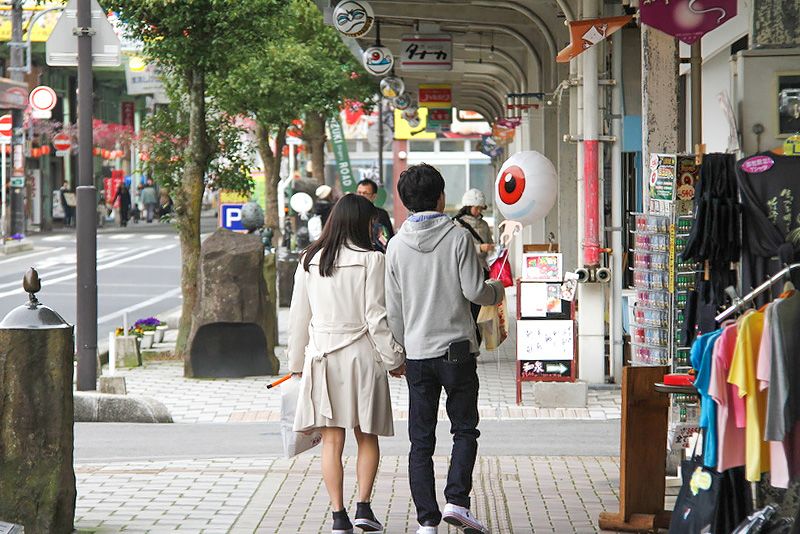 Visitors with a Medama-oyaji balloon.

On a cool afternoon in March, the road was far from packed. Sakaiminato’s relatively remote location works against it in this sense; it would surely be heaving with tourists all year round if it were located one or two hours from Tokyo. All the same, the off-season visitors were clearly enjoying themselves, and many of the snack and souvenir vendors were doing good business.

The Mizuki Shigeru Museum, along the same road, features art by Mizuki, introductions to yōkai, and a number of places to take fun photos. The main focus is on yōkai, but some exhibits relate to his wartime themes. While signage is in Japanese only, there are free audio guides in English and other languages. Away from Mizuki Shigeru Road, there are several more statues and illustrations around the Sakaiminato Station area. 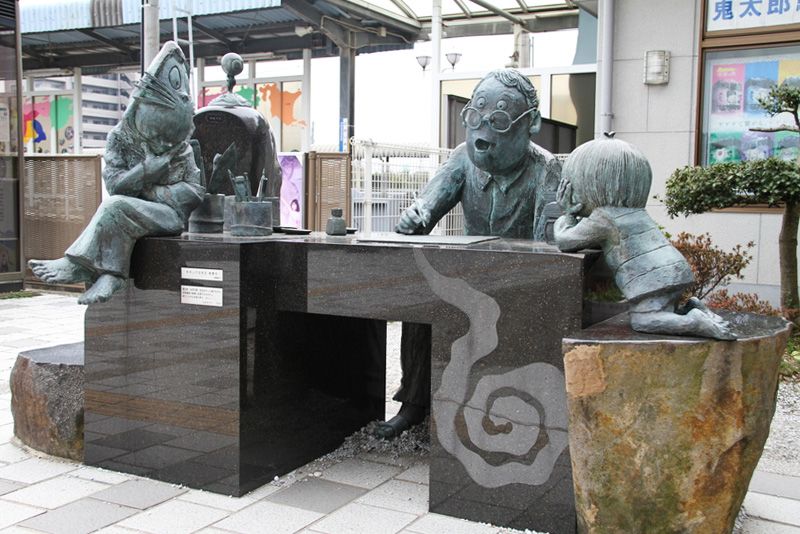 A statue outside Sakaiminato Station presents Mizuki Shigeru writing, surrounded by his characters.

Mizuki Shigeru is not the only manga author from Tottori Prefecture. Aoyama Gōshō, the creator of Detective Conan in Meitantei Konan (translated as Case Closed), was born in what is now Hokuei, which celebrates the association with its very own Conan Street. Another author, Taniguchi Jirō, is from the city of Tottori; he gained fame for Haruka na machi e (translated as A Distant Neighborhood), set in Kurayoshi in the same prefecture.

This has led the local government to position Tottori Prefecture as a “manga kingdom.” As well as making the most of its existing connections, it holds an annual international comic art contest to grow more interest in the area from around the world. In the 2015 contest, entries came from Russia, South Korea, Taiwan, and China, and while the winners were mainly from Japan, one American entry took a second-place prize.

Rising numbers of international tourists are visiting Japan, although they tend to cluster in big-name destinations like Kyoto and Tokyo. Manga could be a way for Tottori and Sakaiminato to pull in some of the inbound traffic. Recent English translations of Mizuki Shigeru’s works, as well as features in the international press and a survey of his work in the New Yorker, have raised his global profile. New fans may be inspired to make a pilgrimage to Sakaiminato, where his spirits live on.