Culture Sep 1, 2017
In January 2017, the Arabic translation of the hit manga series Captain Tsubasa went on sale in the United Arab Emirates. A portion of the first print run was donated to Syrian refugee children. It was translated by Obada Kassoumah, a 27-year-old Syrian who learned the language by studying abroad in Japan. We spoke to him about the hurdles of translating this Japanese soccer classic into his own language. 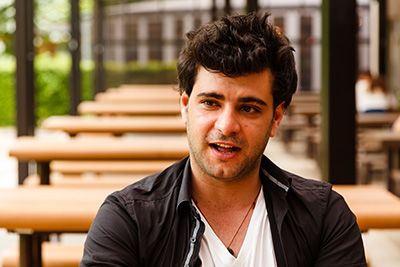 In the Arab World in the 1990s, there was a certain time of day when kids would disappear off the streets. Everyone had rushed home to catch the soccer anime Captain Majid. And when the show ended, they would flood back outside to imitate the soccer super-moves they’d just seen on TV. One of them was Obada Kassoumah, a Syrian who would go on to enroll at the Tokyo University of Foreign Studies.

“Once I tried to copy Majid so hard I knocked myself out. I was trying to imitate his bicycle kick, and hit my head on the ground. That’s how into Majid I was.”

This passion may have been dangerous for an impressionable boy, but it serves Obada well today. He is overseeing the translation of the comic upon which Captain Majid is based, Takahashi Yōichi’s Captain Tsubasa, for its release in the Arab world. After going on sale at the Japanese bookseller Kinokuniya’s Dubai outlet in January of 2017, it quickly became a bestseller, and media attention focused on an international organization’s donation of copies to Syrian refugee children.

“I was really happy when I was asked to translate it—and very excited by the thought that my name would appear on the books as well. If a Japanese manga translated by a Syrian like me helps Arab kids hope and dream, that’s an incredible thing.”

A Soccer Hero Adored Around the World: An Interview with Captain Tsubasa Creator Takahashi Yōichi 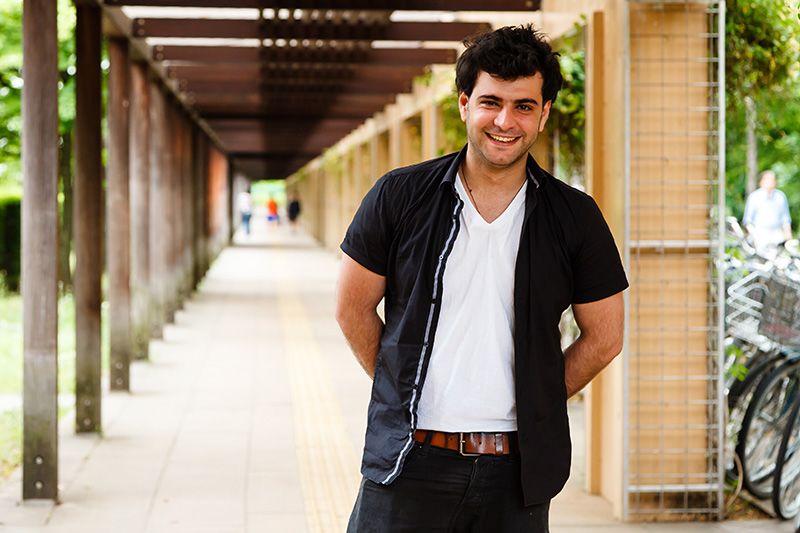 Obada first became interested in Japanese while studying at Damascus University. He had considered studying Spanish, but decided to challenge himself to Japanese instead after hearing that it was a harder language to master.

“I love taking on difficult things. I’m the sort of kid who knocked myself out trying to master Majid’s moves, after all,” laughs Obada. “I was so focused on soccer that I trained for two years with the Syrian pro soccer team El Jaish to get to a level I was satisfied with. Next, I set my sights on Japanese.”

Obada was unfazed even by the daunting prospect of studying kanji. “I found it fun, like memorizing illustrations.” His hard work earned him the highest scores among his fellow Japanese-language students, winning him a scholarship to study abroad at the Tokyo University of Foreign Studies.

“As a kid, I always thought Majid was Arab. That’s how it was translated in the anime. So the manga didn’t have anything to do with why I started studying Japanese. I never imagined I’d come to Japan, translate Captain Tsubasa, and get to introduce the original work to the Arab world.” 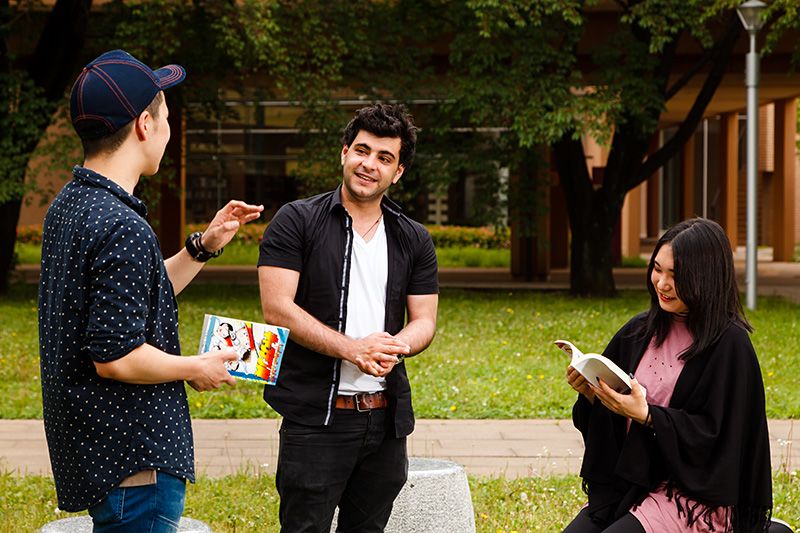 Obada showing the Arabic version of Captain Tsubasa to friends. “I’ve become something of a star on campus,” he says.

Captain Tsubasa is a sports-themed manga centering on the exploits of soccer player Ōzora Tsubasa, his teammates, and his rivals.  An anime version was broadcast on Japanese television beginning in 1983, introducing young fans to the star’s dynamic, acrobatic moves. At the time, it sparked a soccer fad across the nation.

The anime has been broadcast in over 50 countries to date. As a show intended for children, the names of the characters have generally been translated as common names in the local languages. In France, Tsubasa is Olivier; in Spain, Oliver. In the Arab world, he’s Majid.

The Arabic edition of Captain Tsubasa is being sold in the region by Kinokuniya with the blessing of Shūeisha, the original publisher and rights holder. Printing was handled by Dai Nippon Printing, Ltd. Kinokuniya Dubai is distributing the manga in 19 Arabic-speaking countries in the Middle East and Northern Africa.

The translation is a faithful rendition of the original, preserving the Japanese names of the characters to emphasize its origins as a Japanese comic book. “I want school clubs to know this is Japanese culture,” says Obada. Kinokuniya says that it plans to build on this momentum to translate and publish more Japanese content for Arabic readers. 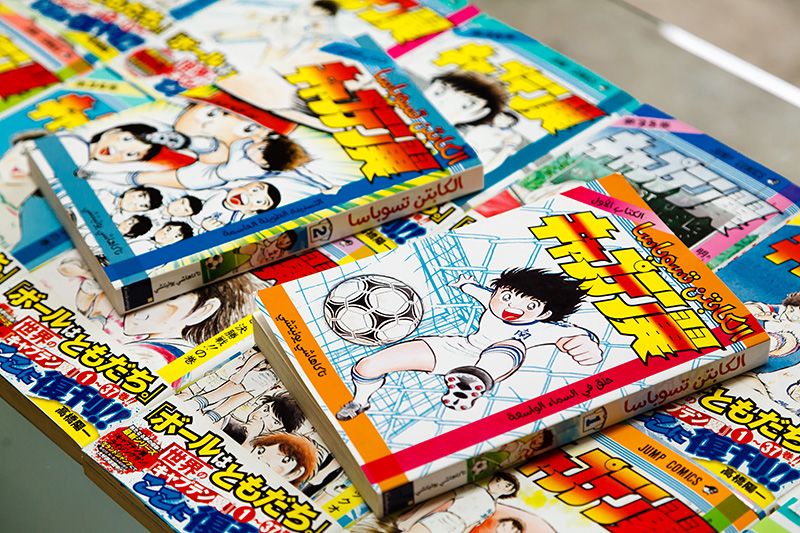 To date, two volumes of Captain Tsubasa have been released in Arabic. The translated title appears above the original lettering for the Japanese Kyaputen Tsubasa.

Finding the Right Person for the Job

Aoyama Hiroyuki, a professor at the Tokyo University of Foreign Studies Graduate School of Global Studies, approached Obada to propose the job of translating the manga. As it turns out, Aoyama himself had also been a dedicated watcher of Captain Majid. 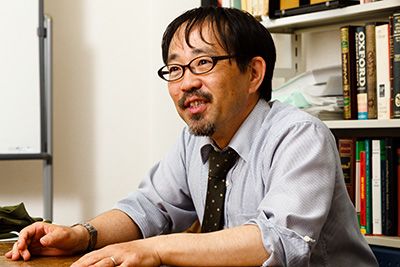 Aoyama is a specialist in politics, thoughts, and history in the contemporary Arab East.

“I lived in Syria in the 1990s. Dubbed anime was seen as educational programming there, so it was translated into extremely formal Arabic. That was a big help for an academic like me who needed to read Arabic essays and dissertations.”

Aoyama thought that rather than a Japanese student of Arabic, it made more sense to hire a native Arabic speaker as the translator. For one thing, Aoyama felt the formality of the speech made Captain Majid less entertaining, so he wanted the new translation to be in more colloquial Arabic. And what was more, Captain Tsubasa came out 30 years ago; young Japanese students of Arabic wouldn’t be very familiar with its particulars. That’s when Aoyama thought of Obada, the native Arabic speaker with the most time in Japan enrolled at the Tokyo University of Foreign Studies.

“I reached out to Obada because he’s a great student. This was well before the Japanese government announced its plans to accept Syrian refugees as exchange students in early 2017, so that didn’t factor into my decision. I picked him simply because he was good.”

The effort to deliver comics to Syrian refugee children unfolded along a different path. Professor Naitō Masanori of Dōshisha University suggested the idea to Shūeisha. They readily agreed, and he purchased a third of the initial 3,000-copy print run to donate the books to a support organization.

Obada learned of the donation effort only after he began work on his translation. Professor Aoyama thought it was “a wonderful idea,” but at the same time didn’t want to give the impression that the Syrian translator was producing the comic simply for the refugee children, either.

“My concern was that if an overly heartwarming narrative took the spotlight, it would just as quickly fade away. Japan should be assisting Syria for the long haul. When I lived in Damascus in the 1990s, there was a huge Japanese presence, with many Japanese companies operating there. Now all of them have withdrawn, and our influence has really dropped. Japanese comics can be enjoyed by adults too, and I think their ‘soft power’ could really contribute to positive views of Japan among Syrians. I don’t want this project to end with Captain Tsubasa. I’d like to see more comics coming out over the long term. That’s what I’ve been saying to Kinokinuya.” 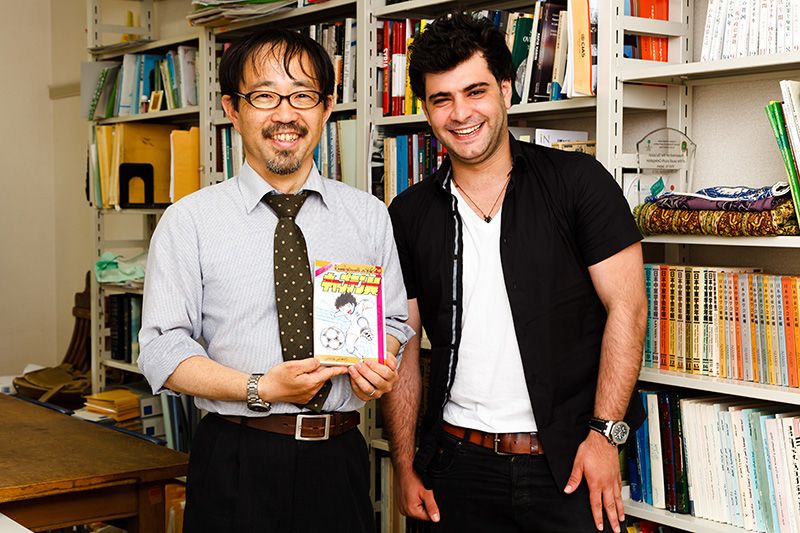 Aoyama and Obada showing off the fruits of their labor.

Bridging Japan and the Arab World

The translation of manga into Arabic is not an easy task. The first hurdle is that Japanese comics use a wide variety of fonts. Trying to replicate them as best he could, Obada searched far and wide for three suitable fonts, then reached out to the owners for permission to use them.

The dialog posed another issue. Even Modern Standard Arabic sounded too formal for the situation. Fortunately, the Tokyo University of Foreign Studies is home to students from across the Middle East, so Obada was able to discuss the finer points of Egyptian and Algerian dialects with fellow students.

“Now that I’ve translated the first seven books, I’m getting the hang of the fonts. Professor Aoyama feels that we can use the ‘soft power’ of manga to build bridges—not only between Syria and Japan, but between Japan and the entire Arab world. After I gain more experience, and once Tsubasa is complete, I’d like to try publishing other manga in Arabic as well.” 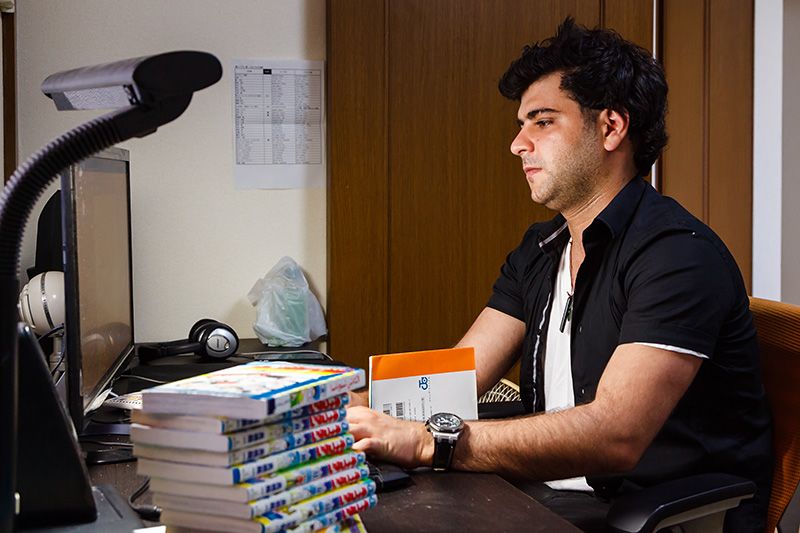 Obada hard at work at home.

Obada continues to translate Captain Tsubasa while completing his studies and looking for a job. When he graduates, he hopes to stay and work in Japan rather than going home.

“This time, I was blessed with an opportunity to contribute to my country. But next, I’d like to take the initiative to do something for Syria myself. After World War II, Japan quickly revitalized and rapidly grew into a developed country. I’d like to learn from that and build work experience so that I can help Syria once the civil war ends. It’s going to be a long and hard road, but just like Tsubasa, I’m never giving up.”

(Originally written in Japanese by Nippon.com and published on June 6, 2017. Photographs by Miwa Noriaki.)