The Road to Japan’s Top Rice

Society Lifestyle Jan 5, 2012
A number of new varieties of rice are posing a formidable challenge to the established, high-grade Koshihikari brand. Prominent among them are the newcomers from Hokkaidō. How was a region unsuited to rice cultivation able to develop what may become the finest rice in the land?

A new brand of rice from Hokkaidō, the northernmost of Japan’s four main islands, made its nationwide debut in the fall of 2011. Dubbed Yumepirika, the rice has a good amount of stickiness, a requisite for top-grade grains, and a rich, natural sweetness. Long in the making, Yumepirika was first marketed in Hokkaidō in 2009 as the best the island had to offer. The following year, the Japan Grain Inspection Association gave it a “Special A” ranking, the highest conferred, in a taste test. The time was ripe for its full-scale marketing outside Hokkaidō. 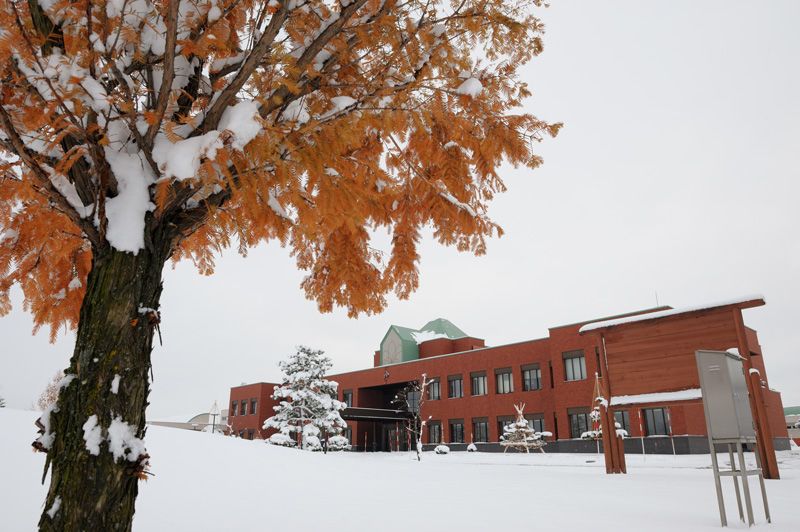 The Kamikawa station and its predecessor, the Chūbetsu Agricultural Experiment Station, have conducted experiments on cold-resistant rice and developed 77 new strains over 125 years.

One of the people involved in the development of Yumepirika is Satō Takashi, a senior research manager of the rice-breeding group at the Kamikawa station. Though rice was first grown in Hokkaidō in the early Meiji era (1868–1912), its cultivation, according to Satō, was banned by the central government because the crop was not suitable for colder climates. This, however, did not deter settlers. 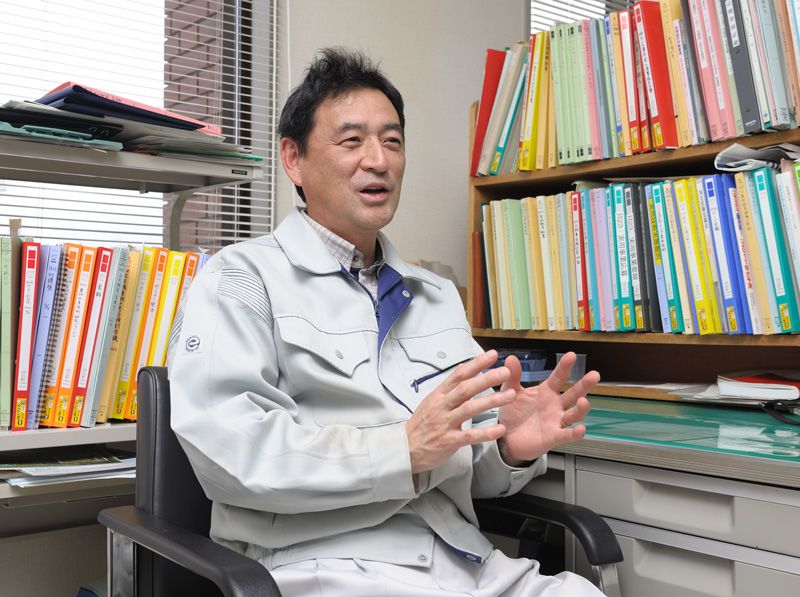 Satō notes that global warming was not a factor in the development of the new Hokkaidō varieties, since temperatures in the months rice is cultivated have held relatively steady over the past two decades.

Over the years, new varieties resistant to cold weather were developed and yields improved. However, the more crucial goal of enhancing taste and producing a variety that could compete with brands in other prefectures proved to be more elusive. The reputation Hokkaidō rice had as a grain that not even birds would touch was difficult to shake.

In the 1970s, growing stockpiles of surplus rice across the nation led the government to reduce the acreage of land for rice paddies in Hokkaidō by half. Intent on breathing new life into the industry, researchers launched a project in 1980 to develop strains so good they could compete with top-notch brands from the main island of Honshū, like Koshihikari and Sasanishiki. “It was an extremely tall order for Hokkaidō at the time,” says Satō.

A Long and Winding Road 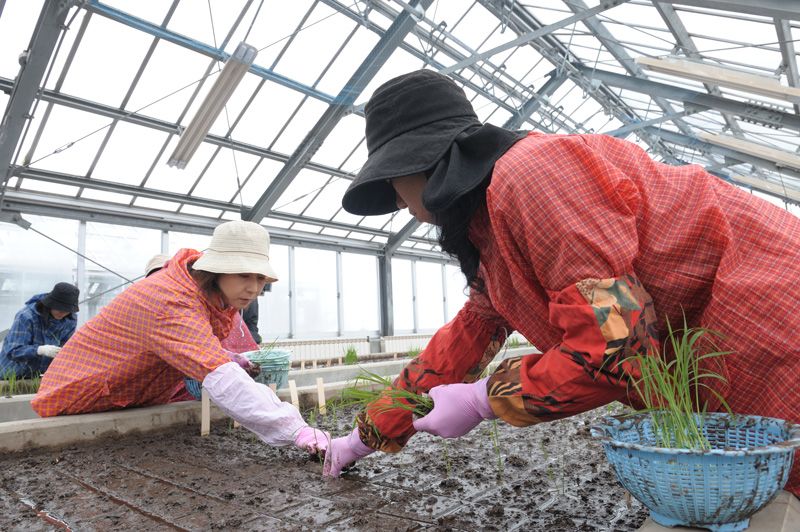 Workers plant seedlings in a greenhouse at the Kamikawa station in November, when the ground outside is covered with snow. A total of 4,000 seedlings representing 81 new varieties are planted.

What does the process of developing a new brand of rice entail? According to Satō, about 100 varieties are crossbred each year, and 150,000 to 200,000 offspring are produced. For the first three or four years, succeeding generations are raised to establish the desired characteristics. Tests are performed on flavor, cold and disease resistance, and yield, and the most promising hybrids are chosen. Following this, farmers grow a test crop. Satō matter-of-factly notes it can take a decade for a brand to be registered.

Because the scale of production is limited, most of the process, from crossbreeding and planting to harvesting, threshing, and testing, is time consuming and labor intensive. There is also a chance that researchers will get to the final stage but remain unable to register the brand. Developing a new strain of rice requires an endless reserve of patience. “You’ve got to be able to pick out which of hundreds of thousands of offspring make the grade by judging the whiteness of the grain and consistency of its size, the hybrid’s tolerance to disease and cold, the sturdiness of the stalks, the toughness of the hull, and other qualities. The most promising hybrids aren’t those with high marks across the board, but those with a particular strength in one area,” says Satō. 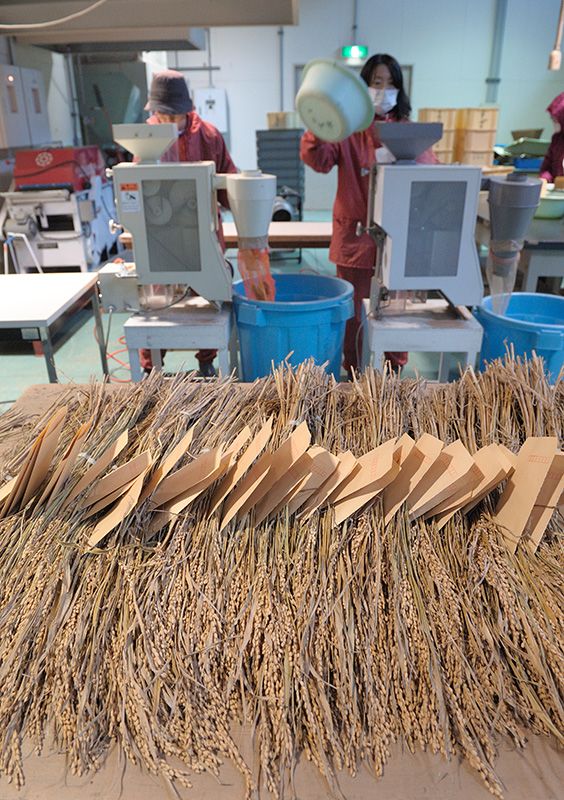 Individual grains are carefully removed from the stalks that were cut down in the autumn of 2011. Each stalk represents a different variety; extreme care must be taken not to mix them up.

Yumepirika was conceived in 1997, when Hokkai 287, a variety with a nice amount of stickiness, was crossed with the high-yielding Hoshitarō strain. The developers sought to achieve nothing short of the creation of the finest rice in Japan.

They made use of a special method to shorten the time required to produce offspring with the desired characteristics. This involved placing stamen and their pollen in test tubes and growing plants from the pollen. The research team manually placed 23,000 stamens in test tubes, and 600 seedlings grew from them. In 2009, the hybrid that came out on top in the intense competition among these candidates debuted as Yumepirika. Though it was almost disqualified because of insufficient yield, researchers held on to the seeds because its flavor was so exceptional. Later tests showed that yields would be sufficient, thus allowing the grain to make it to the table.

A Quest for the Best

The flavor of rice is determined by the amount of amylose, a component of starch, and the protein in the grain. The less amylose the rice contains, the stickier it will be when cooked; the lower its protein content, meanwhile, the fluffier and whiter it will be. In Hokkaidō, temperatures are relatively low when seeds ripen, making it difficult for the level of amylose to drop. The Kamikawa Agricultural Experiment Station purchased instruments to monitor amylose levels as soon as the project got underway and analyzed the levels from the start to streamline the process. 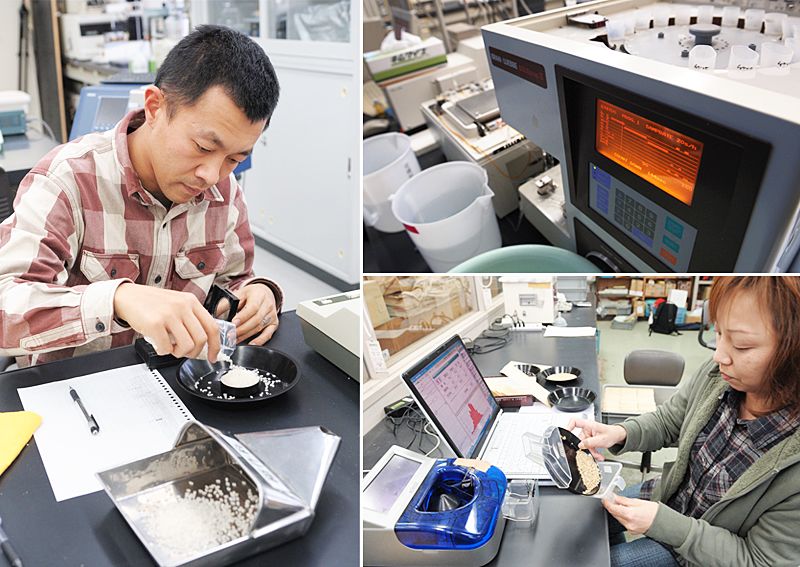 A battery of tests are conducted to evaluate the whiteness of the rice, the length and width of the grain, and the amylose ratio, which determines the cooked grain’s stickiness.

In the end, though, the human tongue has the final call on how the grain tastes. In taste tests carried out during the experimental phase, a panel of researchers and staff members compares rice from the new plants with Nanatsuboshi rice, a known flavor, grown at the Kamikawa station. They rank them on a scale of one to five in terms of whiteness, luster, aroma, texture, flavor, stickiness, softness, and overall quality. During the tests, green tea is the only other substance they ingest. For four months the judges eat and compare four or five varieties a day. The rice that makes it past the initial rounds is more similar than different, and comparisons become increasingly difficult. How do the judges distinguish small differences in flavor? “It comes with lots of experience,” states Satō, who emphasizes that the judges must evaluate the rice not on the basis of their own personal preferences but on the basis of what Japanese as a group prefer in terms of shine, translucency, and stickiness.

Once the whiteness, luster, and aroma results are in, it is time for taste tests. The tasters must detect subtle differences, and second helpings are necessary on occasion. 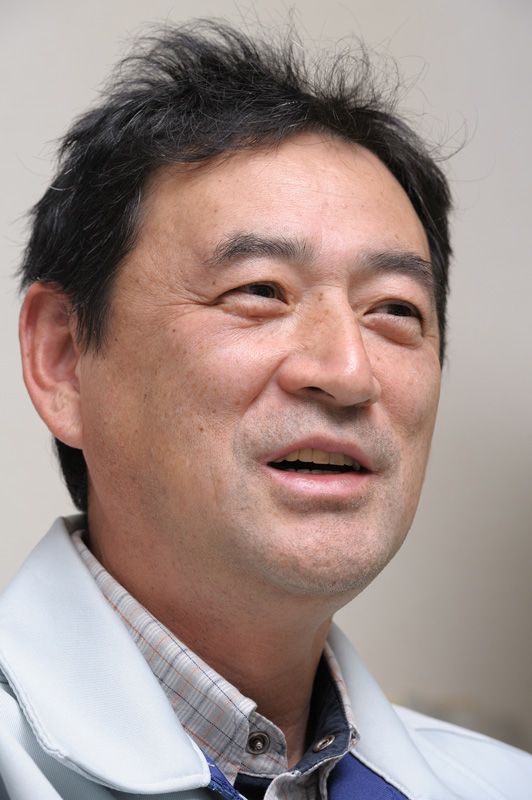 “People like Yumepirika because it’s so delicious,” says Satō. “It holds its own even paired with flavorful side dishes”.

Hokkaidō was ultimately able to turn its frigid climate to its advantage, and the island proved itself competitive with Niigata Prefecture in the category of yield, as well as achieving one of Japan’s best-tasting varieties of rice. Satō stresses, however, that this is not an end but a new beginning. “There’s still much room for improvement in terms of resistance to cold and disease.”

Satō, the son of a rice farmer, says his next goal is to develop a variety that can be grown without pesticides. “I still remember how red my mother’s eyes were after a day in the paddies when the chemicals were sprayed. A variety that doesn’t require pesticides would be good for both farmers and consumers. There’s no end to what can be done.”

Yumepirika was coined from the Japanese word for dream (yume) and the word for beautiful in the language of the island’s aboriginal Ainu (pirika). More than a century ago the Hokkaidō settlers dreamed of an abundantly beautiful harvest in the north country. That dream is very much alive today. 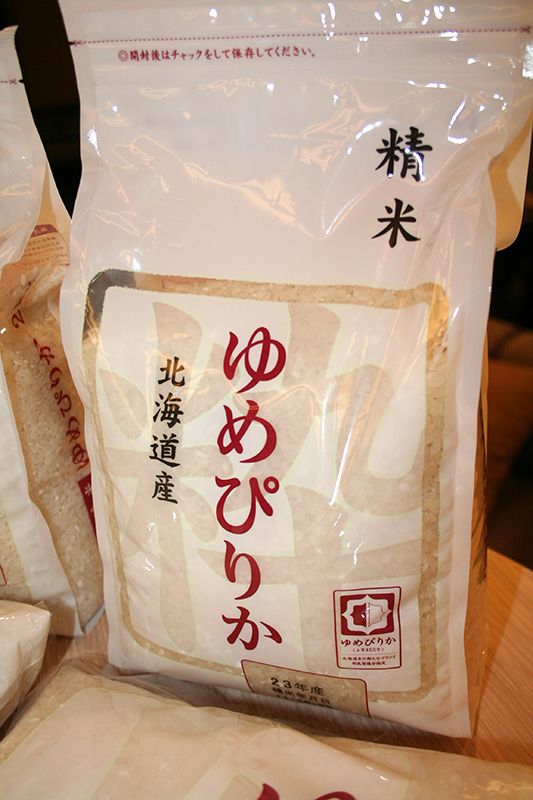 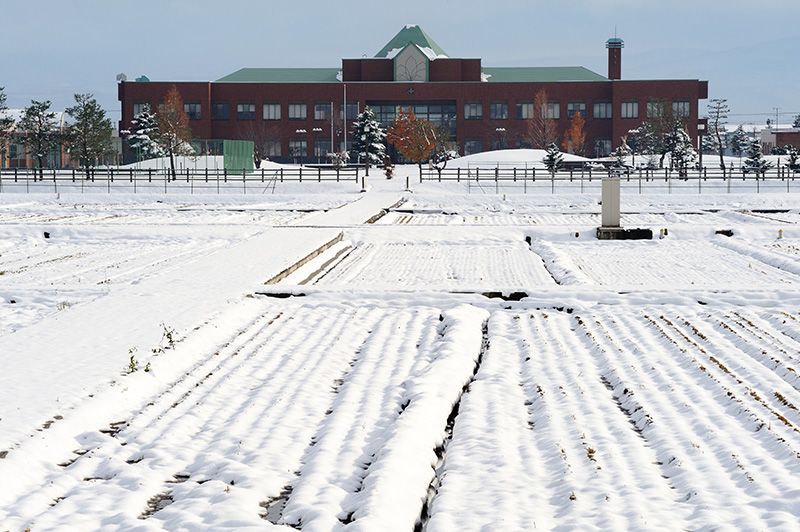 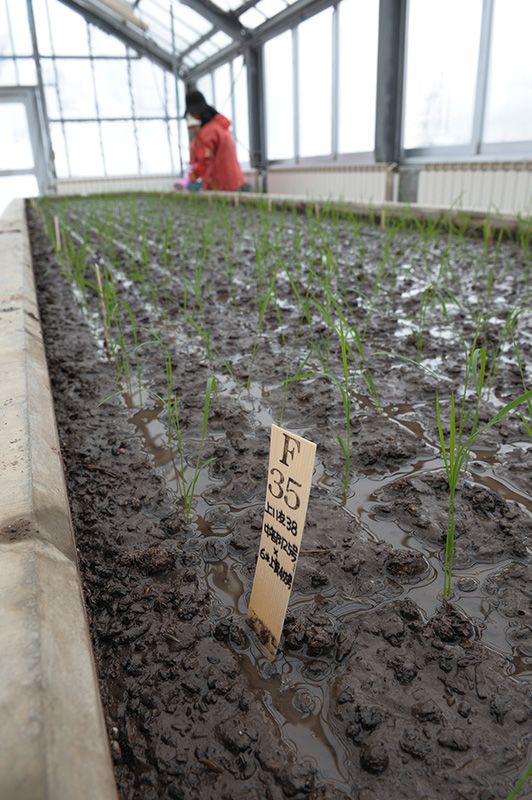 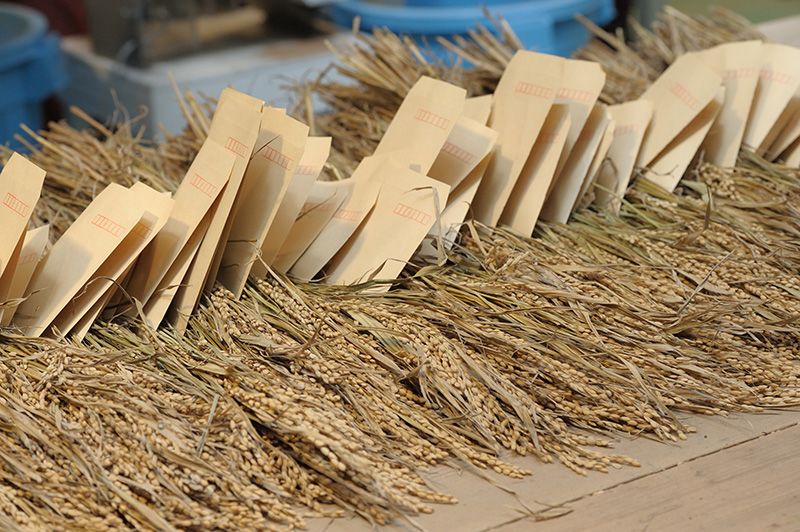 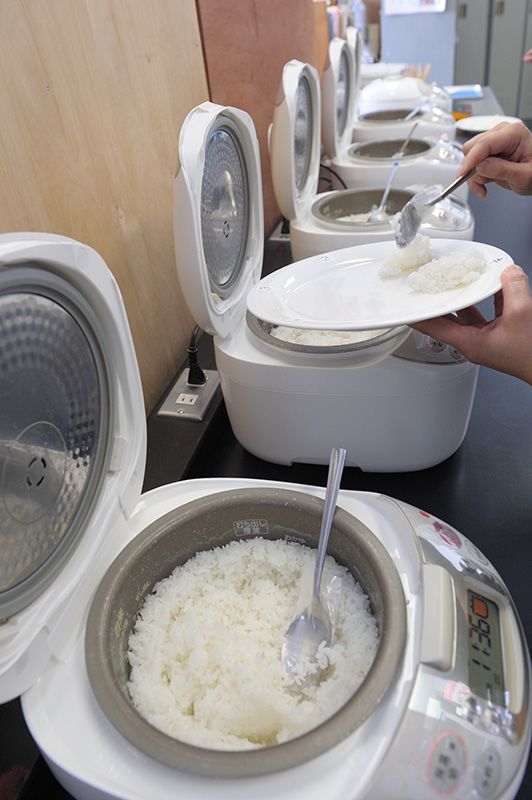 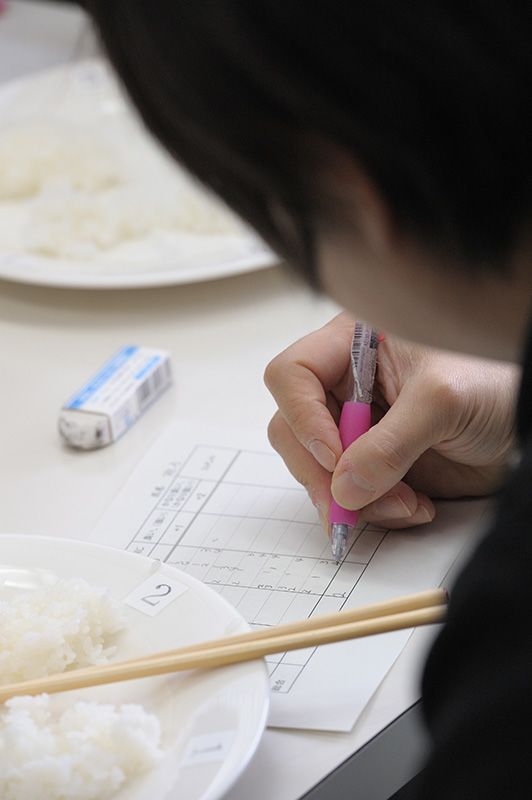 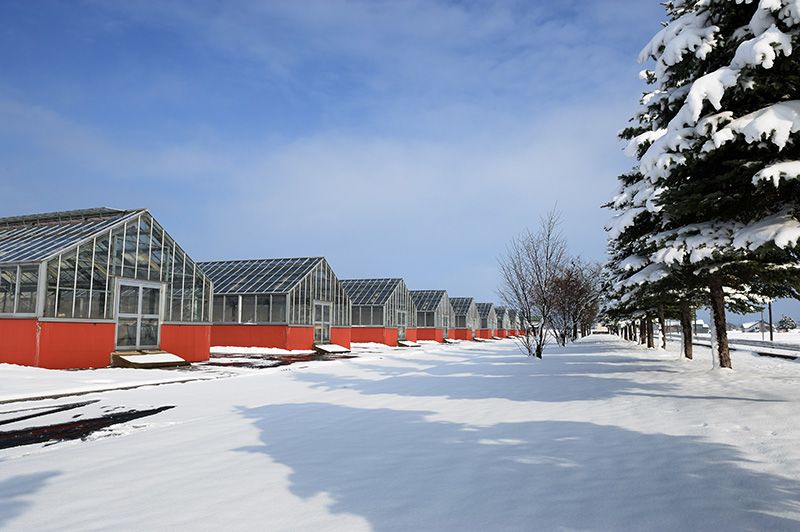