Society Lifestyle Apr 19, 2012
Denim jeans have long been an essential fashion item for men and women all around the world. Some of the world’s finest jeans brands are today produced in the small Japanese port district of Kojima, Okayama Prefecture. We look at the craftsmanship that has transformed it into Japan’s jeans capital.

Momotarō Jeans may seem an unlikely brand to find in Tokyo’s fashionable Aoyama district, known for its big-name boutiques. The jeans are made far from the glitzy Tokyo streets, in a small port district in the west of Japan. Despite its remote home, though, the brand has managed to win over fashionable urban consumers by sticking to old-fashioned craftsmanship based on proven production techniques. Despite its hefty price tag, at around ¥23,000 a pair, the brand’s top-selling “Going to Battle” label is selling well among savvy shoppers, particularly men in their thirties and forties.

The home base for Momotarō Jeans is Kojima, a seaside district in the city of Kurashiki, Okayama Prefecture. The area is known as Japan’s “denim Mecca” because it is where jeans were first domestically produced. Kojima has long been a thriving textile center. This low-lying area of reclaimed land was initially used for cotton cultivation. Then, in the Edo period (1603–1868), it became a center for production of sanada-himo, the cloth cords used to wrap sword handles. During the Meiji period (1868–1912) Kojima was a center for the manufacturing of tabi socks. And after World War II it was bustling to fill orders for school uniforms. It was in the early 1960s that Japan’s production of jeans began in Kojima, when the company Maruo Clothing (now called Big John) launched its products. Using the existing sewing-machine technology used to produce thick canvas cloth, as well as the sewing techniques built up after the war through producing school uniforms, Kojima rapidly transformed itself into the domestic hub for denim production. 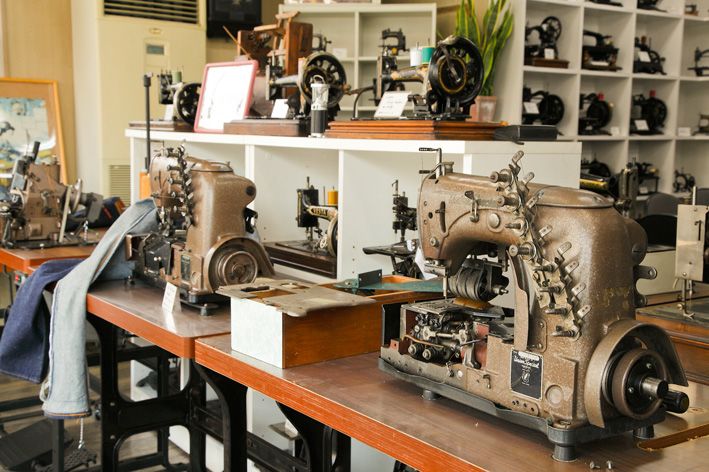 Kojima-based Ryōzan Sewing Machine Co. displays a variety of its machines produced over the years—from old models used to make tabi socks up to the latest ones.

The high level of technical prowess among Kojima’s manufacturers has won praise—and a steady stream of orders—from apparel brands in Japan and overseas, who know that they can depend on the quality of the denim supplied. In recent decades, as lower-priced jeans flooded into the market, the focus in Kojima shifted to the craftsmanship needed to produce jeans with higher added value. Some manufacturers also created their own brands after building up their technology base and design prowess through “original equipment manufacturer” style production for other brands. At present, there are over 30 firms producing finished jeans in the area, and over 200 companies in related industries, together comprising around 40% of all domestic production in this sector. This concentration of producers has made Kojima a magnet for apparel makers and jeans enthusiasts from around Japan and the entire world.

The wide-ranging lineup of jeans brands in Kojima includes veteran firms like Big John and Johnbull; Betty Smith, a pioneer in women’s denim; Dania Japan, a popular brand among Japan’s “select shops” (boutiques offering an eclectic range of carefully chosen brands and products); Highrock, a company famous for its “bush pants”; and the unique designer Kapital. One brand in particular that has captivated diehard jean enthusiasts around the world is Momotarō Jeans of the Japan Blue Group.

The long staple length of Zimbabwe cotton makes it possible to create fiber with fewer joints and greater durability.

Zimbabwe cotton is the secret for Momotarō Jeans’ supple texture and their cool faded vertical stripes (tate-ochi), one characteristic of vintage jeans. This fine cotton, noted for its lustrous, soft quality, is usually used to make dress shirts. The company uses an old-fashioned shuttle loom to weave “selvage denim,” with tightly woven bands on both edges of the fabric to prevent unraveling. This tough denim is an essential element of vintage-style jeans. Many jeans makers abandoned shuttle looms in favor of mass production long ago, but the machines are still used for Momotaro Jeans to create the sort of uneven surface that is the mark of high-quality denim. In addition to the usual blue dyes, the brand’s craftsmen use aizome indigo made according to an age-old method to create the distinctive Japanese shade of indigo blue for the top-of-the-line Gold Label Momotarō Jeans. Other design features include the brand insignia stamped on the rivets hidden underneath the hip pocket and a momo (peach) design on the buttons of the fly to evoke the folklore character Momotarō (Peach Boy), namesake for the jeans. The abundance of these little design touches reflects the inexhaustible sense of fun of the craftsmen who make the jeans. The brand’s attention to quality and design has won over consumers looking for the real thing. Thanks to this popularity, Momotarō Jeans are now available at five outlets directly run by the company (including the flagship shop in Aoyama) and over 100 other retail outlets around Japan.

Selvage denim (lower right) sewn into the jeans is the trademark of vintage denim. The insignia on the rivets hidden behind the hip pockets is one example of the detail-oriented design touches.

With the growing interest overseas in Momotarō Jeans, the brand jointly held a promotional event in 2010 with the Thai branch of the Japanese department store chain Isetan. The following year the lineup also went on display at the Capsule show for casual fashion, held in Paris, New York, and other locations. Tabuchi Tatsushi, who attended these events as a Momotarō Jeans sales manager, said that many attendees were deeply impressed by the beautiful indigo of the company’s jeans. With the overseas market in mind, the company launched a new brand called “Japan Blue.” Today some 70 retail outlets overseas are selling the two brands. 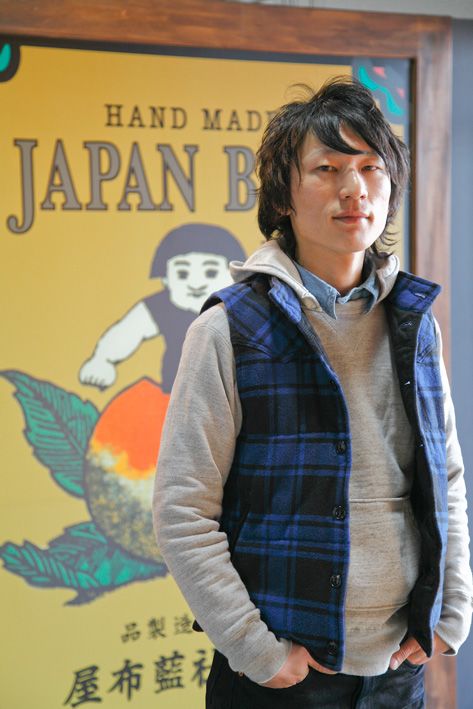 The Facebook page for Momotarō Jeans has been flooded with overseas inquiries, and the company plans to use the page to host online events for customers. Tabuchi proudly ascribes the strong interest in Momotarō Jeans to the company’s “uncompromising focus on craftsmanship.” The aim, he adds, “is not to be a fashionable name that latches on to the latest trends, but rather to be a genuine clothing brand that wins customers for life.” Jean aficionados around the world appreciate the producer’s clear love of jeans, reflected in its discerning attitude toward materials, dying techniques, and production methods.

Kojima is also noted for the “division of labor” that has been arranged among the various clothing-related manufacturers based there. Each manufacturing process—whether for producing fabric or dyes, sewing, or finishing—is highly specialized and carried out at an advanced technical level. Kojima is particularly famous for its outstanding processing techniques. For instance, a groundbreaking technique for washing jeans to make them softer was born in the district in response to Japanese consumers’ aversion to the stiff jeans made in the United States.

A variety of other processing techniques later came into use, including the pumice stone-washing technique that originated in Japan. The high level of processing methods used by Kojima manufacturers has earned them recognition among apparel companies and designers. This recognition has only been enhanced by the popularity of higher-priced jeans made with advanced processing techniques—a popularity spurred by booms in vintage-style jeans in the 1990s and in premium jeans around 2000. Kojima as a result has seen the birth of many higher-priced garments. 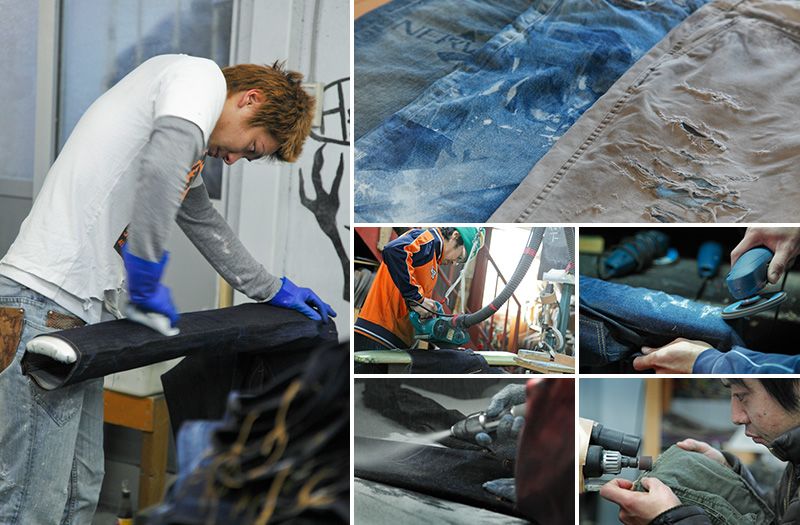 At present there are nearly 20 firms specializing in processing jeans located in Kojima. One company in the spotlight is Bitou, known for its outstanding technical expertise and creativity. In 2010 the company did work for the new made-in-Japan jeans brand Kuro, which made a big splash at fashion events in Italy, Germany, and France.

According to Bitou’s representative director, Shintani Jun’ichi, “the conventional way of producing jeans requires eight to ten different processes, but these can be further broken down into a total of over thirty.” Some of the processes include the “hige process” to create fade lines that give jeans a worn look and the sandblasting of jeans to fade their color. And these steps can each in turn be divided into various subprocesses. 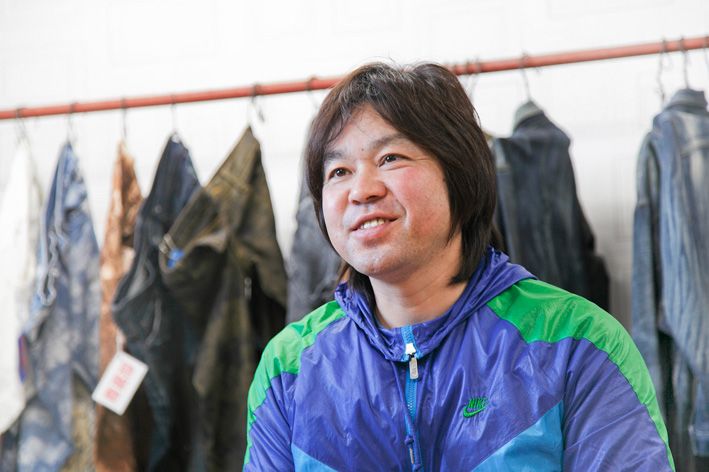 Shintani explains Bitou’s manufacturing approach: “We’re noted for our ability to meet demand for small-lot production, as well as for having all our work done ‘analog-style’ by true craftsmen. This approach requires more man-hours and time, but the end result is a highly creative style unique to Bitou. The original processing techniques we have developed really set us apart from our rivals.

“We’ve been able to sustain that technical prowess by fostering the abilities of our younger employees,” Shintani adds. “Our competitive edge comes from unrivaled processing techniques developed through improvements made day in and day out.” In recent years the company has handled processing and finishing for around 400 different brands, including world-famous fashion marks.

The exceptional quality of Kojima jeans today is the result of outstanding techniques related to textiles, sewing, and processing, as well as the fine-tuned sensibilities and enthusiasm of the denim craftsmen. The prestige of the made-in-Kojima label as a sign of the genuine article has been established over the years by this synergy between technology and the efforts of countless craftsmen. The global denim industry keeps its attention focused on Kojima manufacturers to see what further strides they might make in the years ahead. 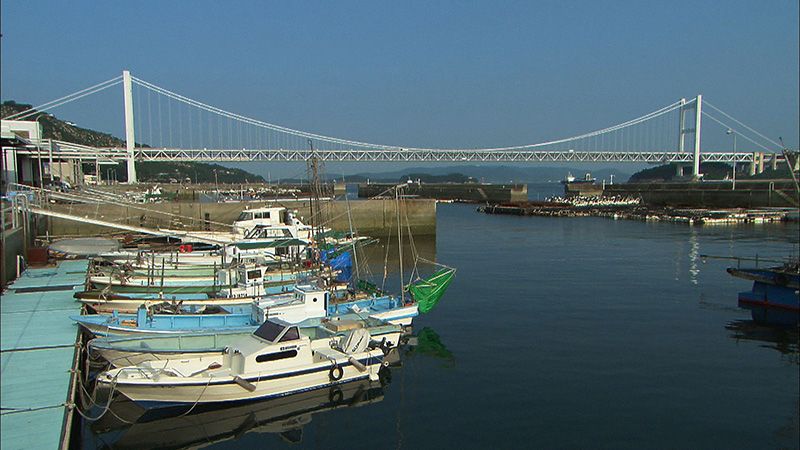 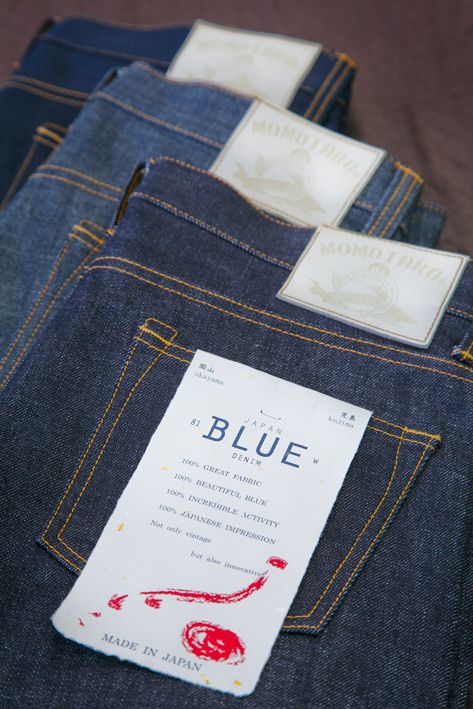 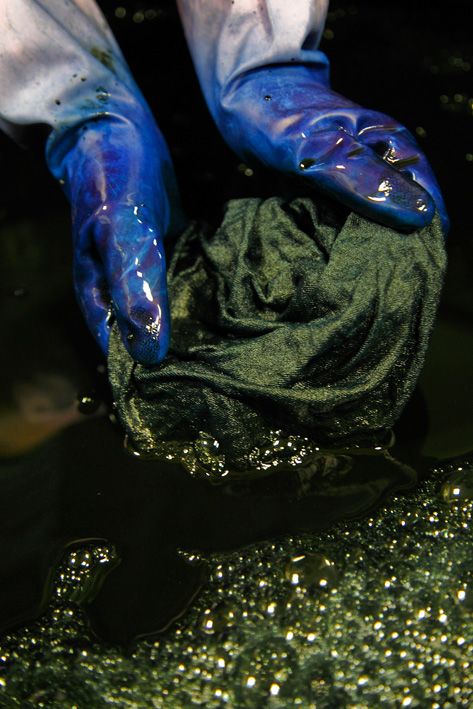 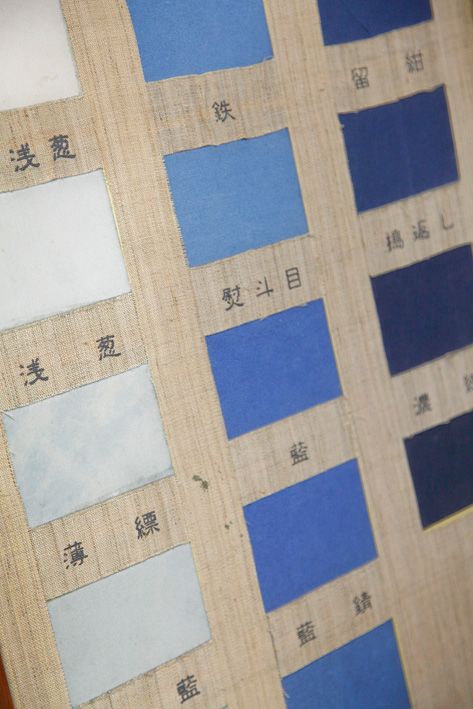 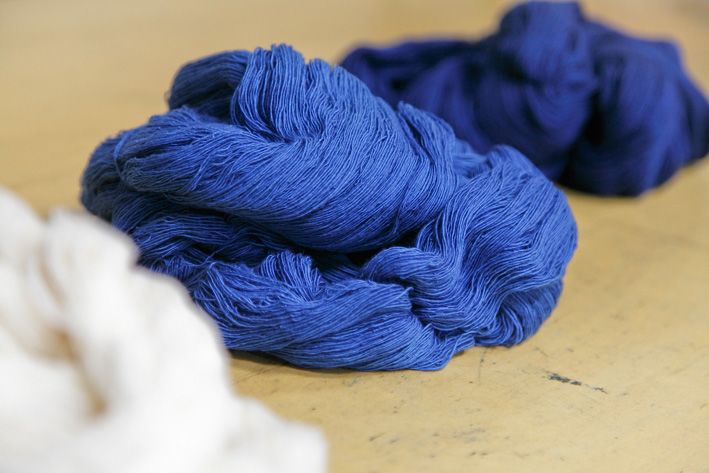 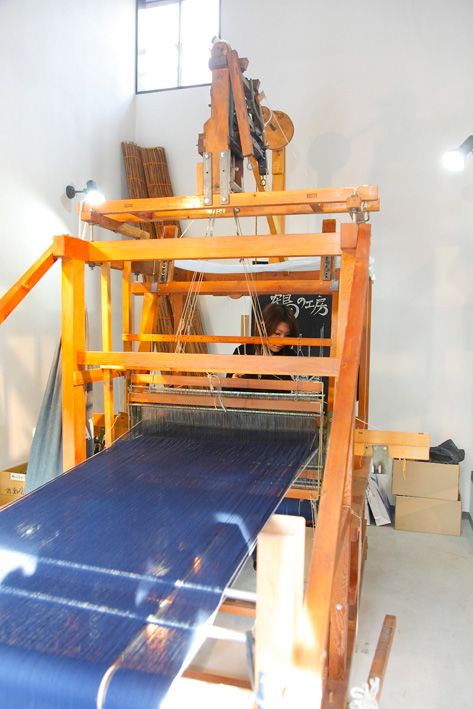 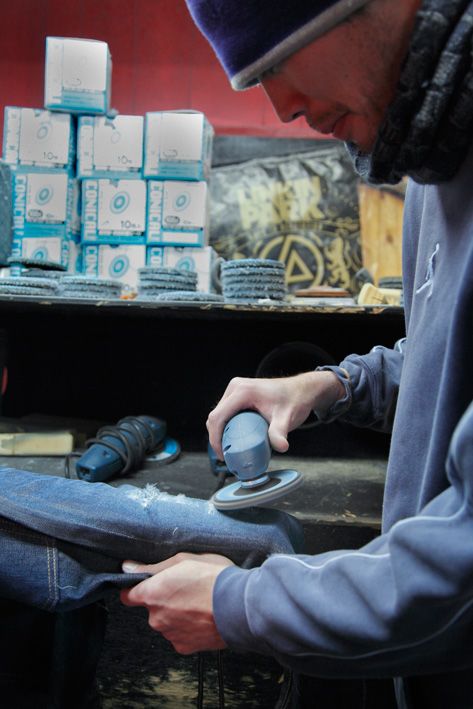 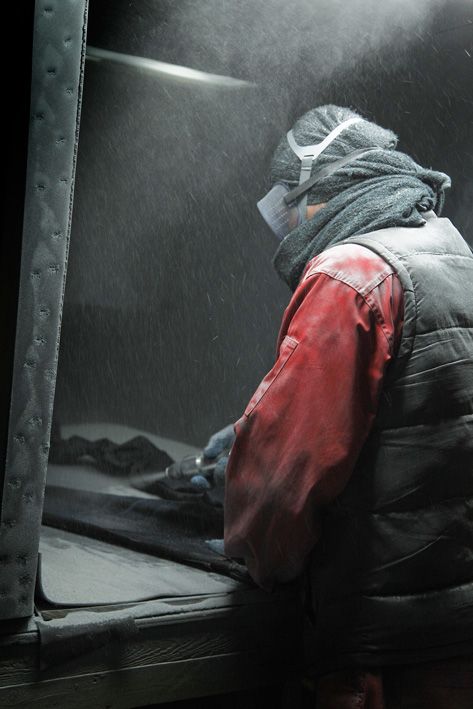 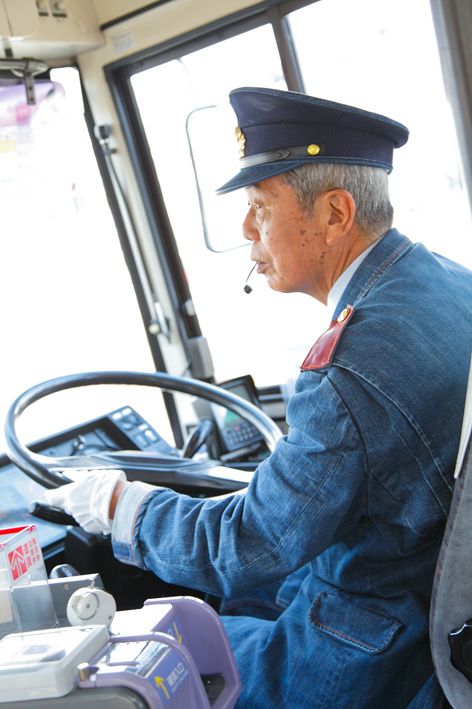 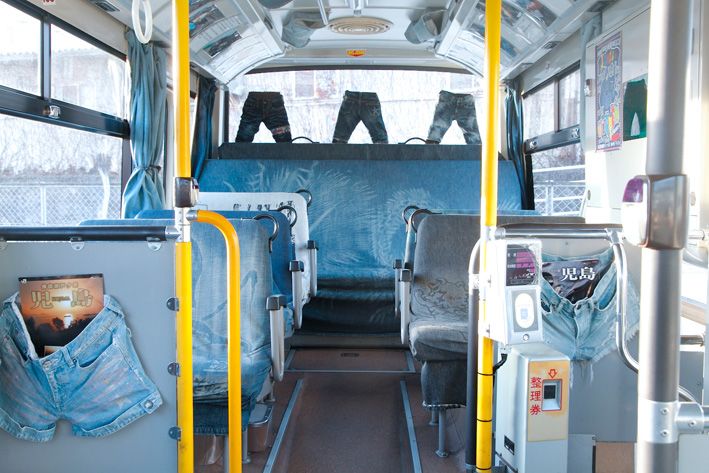 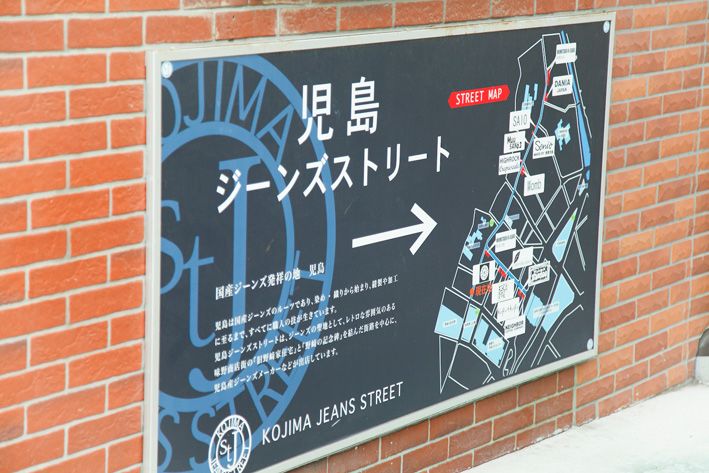