Society Lifestyle Apr 27, 2012
From just after Japan’s opening to the West in the late Edo period (1603–1868) through the 1960s, silk was the nation’s representative export. Today demand for Japanese silk has fallen due to cheaper silk from other countries and synthetic fabrics, but the town of Kawamata in Fukushima Prefecture—one of Japan’s silk centers—is aiming to revitalize Japanese silk production using world-class technology.

Fairy Feather silk is thin to the point of transparency, as seen in this scarf.

The supple Fairy Feather silk developed in Fukushima Prefecture’s town of Kawamata, one of Japan’s most renowned silk production centers, is the thinnest in the world, and so light that it feels like a concentrated layer of air—perhaps even as thin as the legendary hagoromo, or feather mantle, from Japanese folk tales. Fairy Feather is made from 8-denier silk microfibers that are only one-sixth as thick as a human hair (about 50 deniers). This organdie (an ultrathin, plain-woven, sheer fabric), woven on a loom from thousands of silk microfiber warp threads, is so light that it feels nearly weightless to the hand. The softness of such a thin cloth envelops the skin gently and surely.

Kawamata’s Fairy Feather is said to be the thinnest silk in the world. The technology enabling industrial production of this fabric has won high praise, including the Prime Minister’s Prize, the highest honor at the 2012 Monozukuri Nippon Grand Awards. Although silk production is one industry that has been moving overseas, Fairy Feather continues to attract attention as a globally competitive product.

Birthplace of the “Yokohama Scarf” 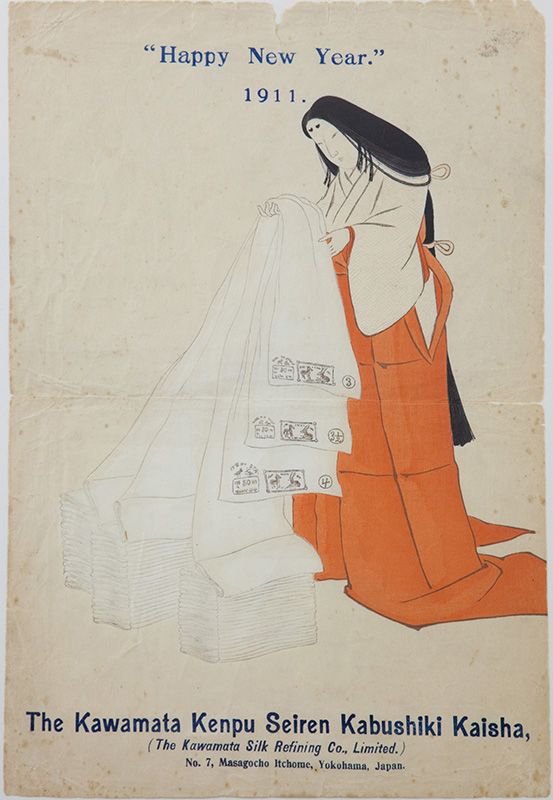 The cover page of an English-language woodcut print calendar produced in 1911 by the Kawamata Silk Refining Co., Ltd. This calendar was a bonus gift accompanying silks exported to Europe or America.

The town of Kawamata has been known for producing thin silk since ancient times. According to legend, Otehime, the empress-consort of Emperor Sushun (r. 587–92), fled to Kawamata after the emperor was assassinated in 592. There she propagated the arts of sericulture, or silkworm cultivation, and weaving. A text from the mid-seventeenth century says that Kawamata was already widely known as a silk town, and the region began exporting the product internationally in the 1880s.

The manufacture of silk scarves boomed in the port city of Yokohama, and “Yokohama scarves” became famous worldwide, even for a time holding an 80% share of the global market. Almost half of these so-called Yokohama scarves were actually made from cloth produced in Kawamata.

Fujiwara Kazuichi, head of the Fukushima Prefecture Textile Industry Association, is an authority on the history of Kawamata and its key product. “Sheerness has always been a property of Kawamata silk,” he notes. “Since it was sheer and of high quality, by 1884—just after the Meiji Restoration in 1868—it was already being exported via Yokohama. The selection of Fukushima as the location for the first Bank of Japan branch in the Tōhoku region was because it was a trading center for the raw silk and silk products that were at the time a major export of Kawamata. As the financial center of Tōhoku, it also saw a lot of foreign currency coming in from overseas sales of that silk. But today, production volume has fallen to only one-tenth of what it was at its peak.”

A Return to Success for the Industry 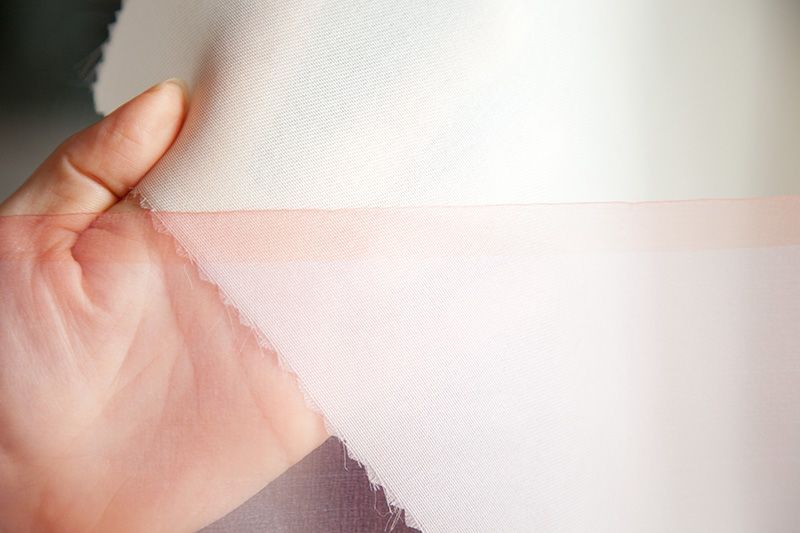 Fairy Feather (at bottom of photo) compared with silk cloth about ten times thicker, made by the same process.

Fairy Feather was the technical achievement that turned the depressed Kawamata silk industry back into a success story. This textile was developed by Saiei Orimono Co., Ltd., which was founded 60 years ago. President Saitō Yasuyuki says that the name was based on “the image of a feathery curtain of heat haze in the air, thin enough to blow away in a gentle breeze.” The cloth features warp and weft threads in alternating colors, creating just the iridescent fabric that the company first envisioned when it set out to create it.

Funding for development of the world’s thinnest silk came from various sources, including the Ministry of Economy, Trade, and Industry, which designated it as a Local Resource Support Project. The silkworm cocoons used as raw materials for the thread are a specially chosen variety. Silkworms usually spin their cocoons after molting four times, but the silk used in Fairy Feather is from a variety called sanminsan, meaning “thrice-sleeping silkworm.” Cocoons produced after just three moltings are smaller, but the silk fibers they provide are as thin and elastic as spider silk. The higher cost of producing this silk in volume means there are few companies using it, though. 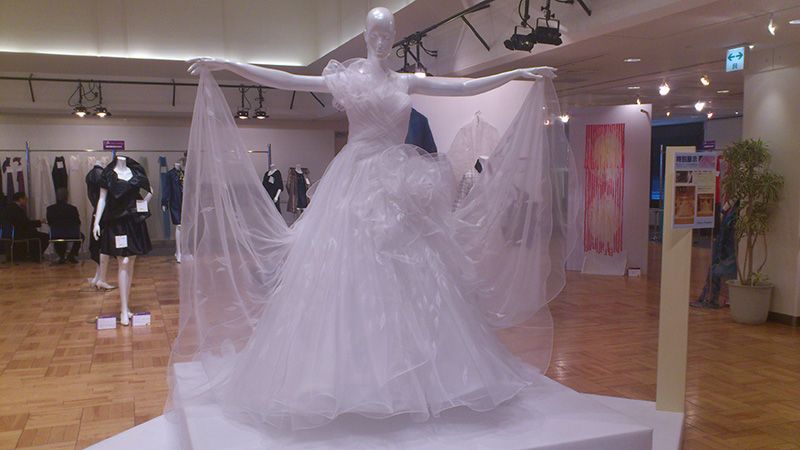 A wedding dress using Fairy Feather, designed by Katsura Yumi, on display at the Fukushima Textile Exhibition held in Tokyo in March 2012.

Saitō explains the reason Saiei Orimono opted for a type of thread that other companies were hesitant to use: “Light, thin fabrics are very popular in the fashion industry right now. Katsura Yumi, a wedding dress designer we’ve done business with for thirty years, told us that she wanted to make dresses that would feel so light on the bride that she’d be able to dance with ease.”

The company made unique improvements to its looms, enabling them to weave cloth from sanminsan microfiber silk threads in large quantities, but to also avoid stressing the ultrathin threads, leading to split threads or fluffiness. This strict control of thread tension is what allowed Saiei Orimono to commercialize Fairy Feather.

Success in Paris and Milan

Saiei Orimono also worked to further develop its overseas business. It had been exporting silk for the American bridal market for about twenty years, but exports dropped after the 2008 financial crisis. The firm used that as an opportunity to widen its sales channel to the European apparel market. The first step was participation in a trade fair held in Milan by JETRO, the Japan External Trade Organization. The positive response—and the fact that this was a product that needed to enter the European market in earnest—led the company to apply for JETRO’s Customized Export Project Support Program, for which it were selected. After displaying its wares at February 2012 trade fairs held in Paris and Milan, Saiei Orimono received sample orders from several famous international brands. Following that, local papers reported that the company’s fabric had been chosen by Giorgio Armani. 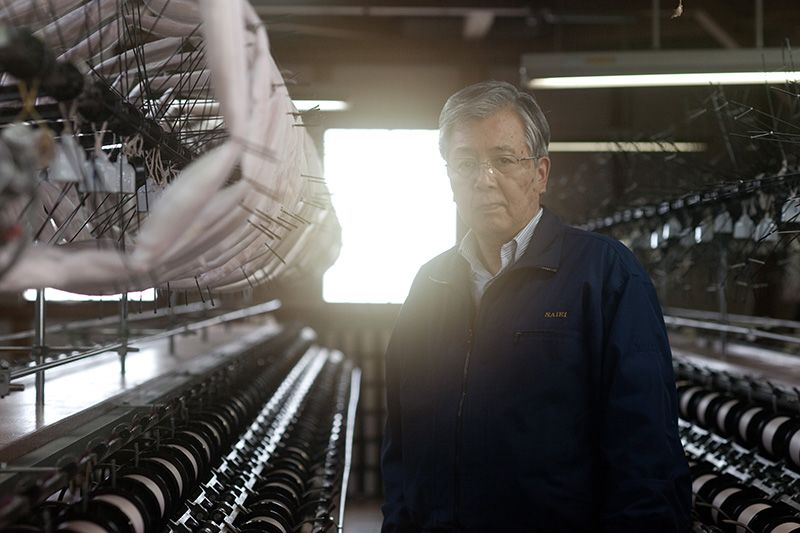 “Much time and many hands are needed before we can make a product and put it on sale. We could not have completed Fairy Feather without the generous assistance of the company dyeing the thread, the company that twists the thread, and the company that refines the cloth. Since the disaster we have all gotten used to hearing the word kizuna, the social bonds that tie us together. I believe that this fabric is truly a grand culmination of kizuna,” Saitō says enthusiastically.

Saitō’s dream is for his company’s cloth to be used in theater costumes—and not just any drama houses, but those with tradition on the level of the Paris Opera. How high can this dream fly with wings of Fairy Feather? At a time when Japan-made silk scarves were popular all over the world, the name of the town of Kawamata, where they were made, was hidden in the shadow of the port of Yokohama, from where they were exported. Today, though, Kawamata silk looks primed to build global fame in its own name. 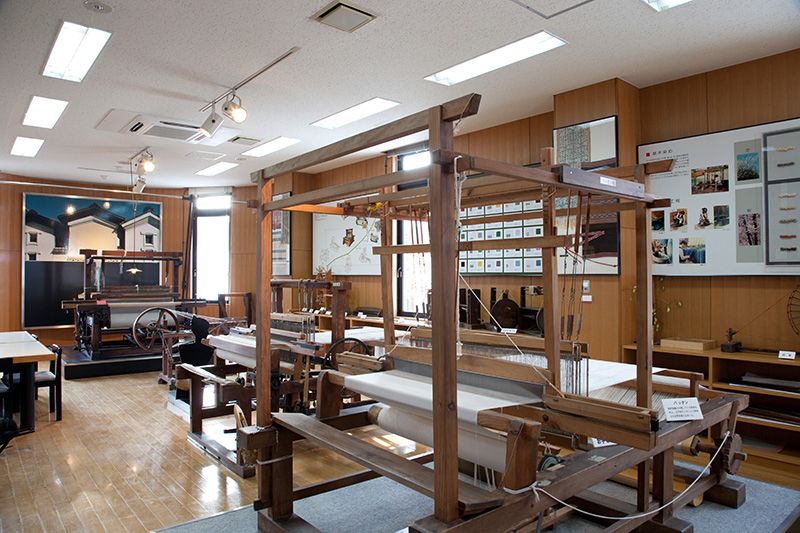 An Ōhashi-style power loom on display at the Textile Museum.