Society Lifestyle May 21, 2012
One year on after the disasters of March 2011, thousands of people in Fukushima are still unable to return to their homes, and the prefecture’s reputation is in tatters. At this specially organized roundtable event, six local journalists spoke about the reality of life in Fukushima today.

Hayakawa Masaya
Joined Fukushima Minpō Co. in 1984. Has been general manager of the news department since 2011.

Seto Eiji
Joined the Fukushima Min’yū Shimbun in 1983. Has been editorial bureau chief since 2009.

Gotō Yoshinori
Joined Fukushima Television Broadcasting in 1988. Has been news director since 2009.

Hayakawa Gen’ichi
Joined Fukushima Broadcasting Co. in 1984. Has been news production manager since 2008.

Takano Hiroshi
Joined TV-U Fukushima in 2005. Has been a reporter in the news department since 2008.

Continued from part one. 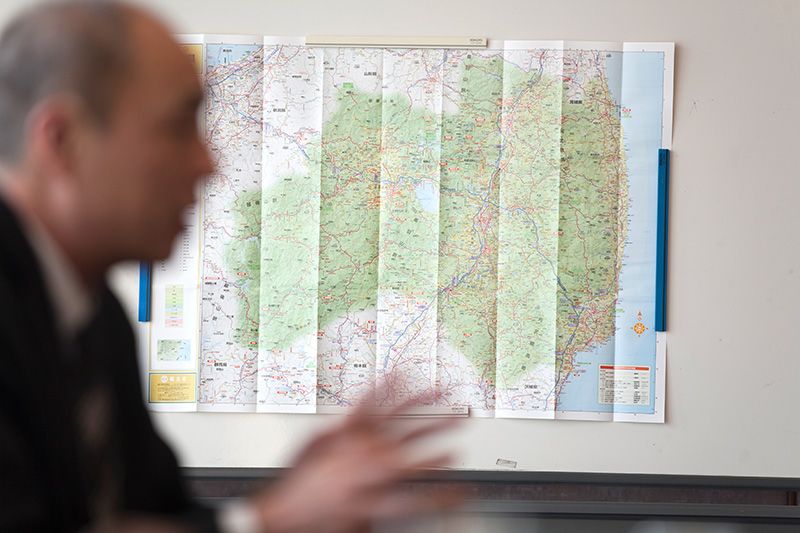 HARANO JŌJI  In the rest of the country, a lot of people use “3/11” as shorthand to refer to last March’s disasters. But I understand that in Fukushima, it is “3/14” that is really the key date.

GOTŌ YOSHINORI Yes, the date etched in the minds of most Fukushima residents is probably not so much 3/11, when the earthquake and tsunami struck, as 3/12 or 3/14, when the hydrogen explosions took place at the nuclear plant, or 3/15, which was apparently the date of the largest fallout of  radiation. Our company has its head offices in the cities of Fukushima and Kōriyama. In Fukushima in particular, the radiation levels were higher than the rest of the prefecture. As Fukushima residents, we certainly have a strong awareness of being involved in this crisis, even if we don’t go so far as to regard ourselves as victims. If we report that most people in Fukushima Prefecture are carrying on their normal lives, people outside the prefecture are bound to think that we are trying to reassure everyone that the situation is safe. Dealing with this kind of pressure will be a key task in this second year since the disaster. 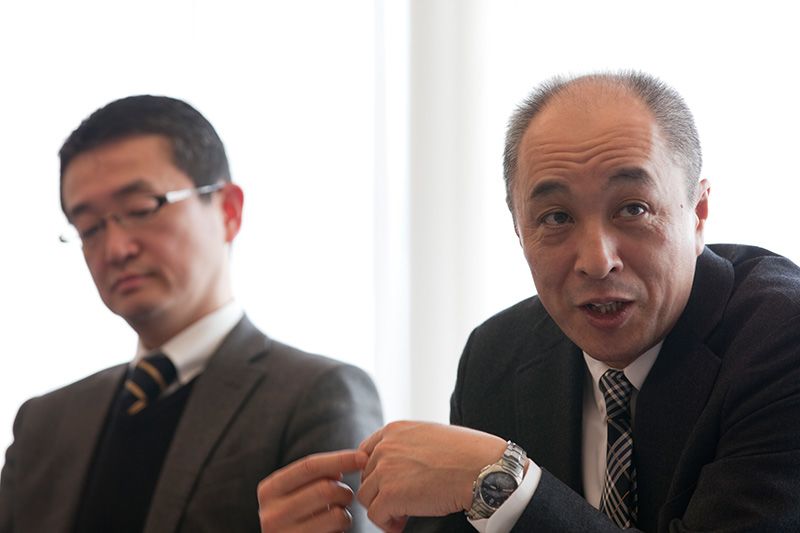 HAYAKAWA MASAYA At the time of the disaster, I was talking things over with someone from Chūgoku Shimbun, based in Hiroshima, who told me that they had once been in the same situation as Fukushima newspapers today. After the war, they had to deal with the burden of the atomic bomb attack on the city, just as Fukushima is now saddled with the nuclear accident. His view was that reporting on this kind of subject needs to go on for fifty years or even a century. And I think he was right: The nuclear accident was on a scale that was almost unprecedented anywhere in the world, and we still don’t know what the long-term health effects of low-level radiation exposure are. The memory of the nuclear accident should not be allowed to fade. We need to keep on reporting the facts.

I was also talking recently with someone from a newspaper in Kumamoto Prefecture, where people in the city of Minamata were affected by what became known as the “Minamata disease” [as a result of mercury poisoning in the 1950s]. On top of the health impact of the disease, they also had to deal with a whole range of social problems as well. Perhaps surprisingly, I think these experiences mean that local newspapers in these areas have a better idea of what we are going through than the Tokyo-based media.

HAYAKAWA GEN’ICHI This past year it’s been a struggle just to keep up with events. As a local TV station, this has made it hard for us to provide local residents who have been impacted by the nuclear disaster with the sort of information they need. One question running through everything we do is: What kind of coverage should we be providing, as a local broadcaster? It’s a process of trial and error. I think there is no alternative but to keep on trying, to keep on learning, and keep on communicating. To Fukushima residents it might look as though we are taking 200 steps back for every step forward we make. But I think as a local TV station it’s important for us to keep wrestling with these issues, even if the results are not always everything we would hope for. 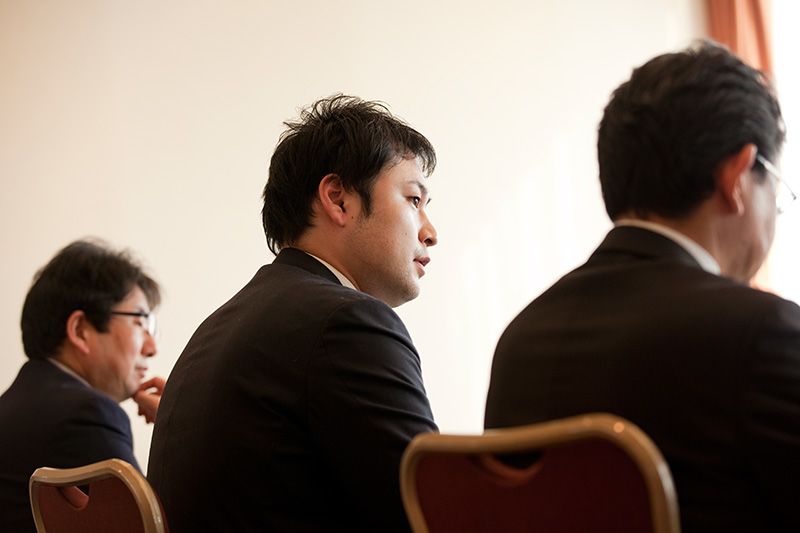 TAKANO HIROSHI  What I really want to get across about life in Fukushima to people in other parts of Japan and overseas is that people are getting on with their everyday lives, and bringing new children into the world just like before. But these ordinary lives are not getting covered in the news. A strange kind of atmosphere prevails in which rumors and the damage they are doing have to be reported as news. This raises the question: How should we report on the sort of ordinary happenings in the prefecture that are not so different from life before the disaster? This is one of the problems we need to deal with.

HARANO  Young journalists in particular must have been rocked by the immediate aftermath of the disaster. How did people cope with the anxiety, the loss of loved ones, or having to leave their children at home to go off on a work assignment? Could you elaborate on some of those difficulties?

HAYAKAWA GEN’ICHI We really didn’t have time to worry about such things. We were so wrapped up in reporting. We simply had to get out there and cover the story.

HAYAKAWA MASAYA  Several of our journalists had parents in the evacuation zone, who had to leave their homes. Journalists have had to carry on with their work while also worrying about radiation and other problems.

SETO EIJI We actually lost one of our journalists in the disaster. He was reporting on the coast and was swept away by the tsunami. It wasn’t until a month later that his body was found. He was a young reporter in his prime, so it is safe to say that other reporters of his age must have been quite upset. People had to cope with the experience of seeing dead bodies during the tsunami itself, although this is something that people tend not to talk about. Not many people can face such horrors without losing their composure. There was a need for counseling to help people cope. A lot of employees had escaped from the tsunami with it was almost literally on their heels, and that trauma had a lingering impact as well.

HARANO  What about positive signs? Are there any incidents you could share that show how things in Fukushima are moving in the right direction?

TAKANO  One positive development is that although people have moved out of Fukushima since the disaster, people have also been moving in from other prefectures. A lot of people want to help Fukushima rebuild and have started up their own volunteer organizations. There are more of these newcomers than we could have imagined. They are forming bonds of friendship and a growing number of initiatives are helping to rejuvenate the region. There has also been a private-sector effort for doctors to come to Fukushima to provide medical care in response to the serious shortage of physicians following the disaster. I think these are some positive signs.

MURAKAMI Almost every day we make an effort to broadcast something positive. We do whatever we can to track down encouraging news that might comfort viewers or lift their spirits slightly. But overall, these bright spots are soon eclipsed by other events.

HAYAKAWA MASAYA  Every day, the Fukushima Minpō carries articles on our “Never Give Up Fukushima” feature page, which we set up right after the disaster to focus on forward-looking residents and their activities. The Fukushima Min’yū Shimbun has a similar column, if I’m not mistaken.

SETO  We do a similar thing. Our aim is to try to encourage people, to say “Let’s look on the bright side and keep moving forward.” We feature big photos of people really throwing themselves into working to make things better. But in the early days most of the reports we ran in this section covered people who had some sort of trade that made it relatively easy for them to relocate. A barbershop, for example, or a soba noodles restaurant. People with a trade like that are able to make a living wherever they go. But if we only report on businesses that are relatively easy to get back on track, we’re doing a disservice to readers who might not have it so easy. Lots of people want to work but can’t find jobs. People like that might object that reading about other people’s success stories doesn’t do them much good.

HAYAKAWA GEN’ICHI  What about Fukushima Central Television’s baby idea? I thought that one worked well.

A Baby’s Smile Gives People the Strength to Go On

HARANO  What is that project?

MURAKAMI It’s an initiative that I started. I was trying to think of moments of joy and optimism in life, and it occurred to me that nothing could be more positive than the birth of a new child. I thought that one way to motivate people to stay positive would be to encourage people to feel that it’s our job to look out for the interests of our children. The idea was that it’s up to us adults to make sure that these kids have happy and healthy childhoods so that in years to come they can look back and count themselves lucky to have grown up in Fukushima. So that’s the idea: We feature daily photos of newborn babies, and hope that the babies’ smiles will inspire our readers to do their best for the next generation.

HARANO Is there anything in particular you would like to tell people overseas about the situation in Fukushima? 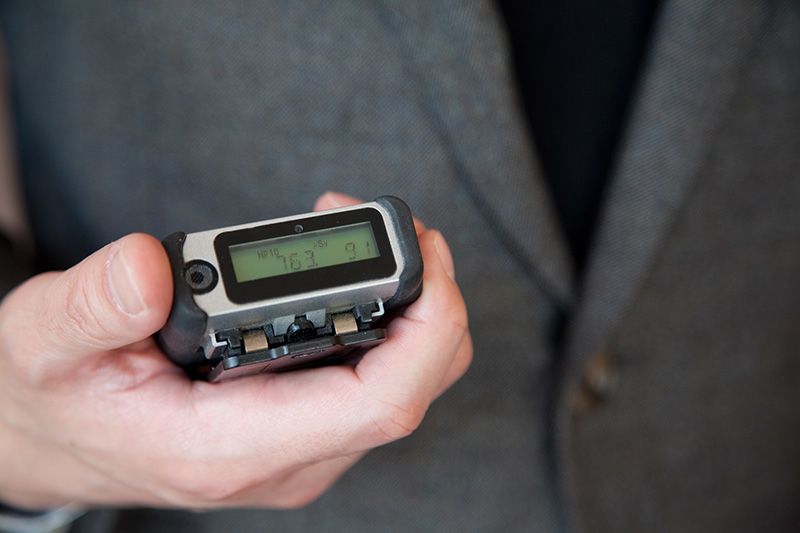 GOTŌ One thing worth mentioning is that natural radiation occurs throughout the world. People might think that Fukushima has a “monopoly” on radiation, but in fact it can be found in the natural world. And just about any place will have around 1 microsievert of radiation exposure per day. In Fukushima reporters have been carrying Geiger counters to measure, more or less accurately, how much radiation there is. I took numerous several measurements over a period of four months. On average, I was being exposed, on average, to 3.8 microsieverts per day. But 1 microseivert of that comes from naturally occuring radiation, as I just mentioned. People have the misconceived idea that the radiation levels shoot up the moment you set foot in Fukushima and drop to zero again the moment you leave. I want to get across to people that this view is simply wrong.

Another thing I want to emphasize is how many people are living in our prefecture. It is true that around 62,000 people have evacuated from Fukushima to other prefectures, and this is the reality we have to face. But we also need to bear in mind that nearly two million people still live in Fukushima. I’d like people to be aware of this fact. The best thing would be for people to visit Fukushima for themselves. Ideally, people will come to Fukushima and then to convey to others their feelings about what they saw.

HAYAKAWA MASAYA  There is no doubt that the situation in Fukushima has been tough since the March 11 disaster and the nuclear accident that followed. But the fallout of radioactive materials was limited mainly to the immediate vicinity of the nuclear plant. If other areas are properly decontaminated, things can get back on track. This is the view of people in Fukushima. Instead of pinning a label on our prefecture as “contaminated” or “unsafe,” I would encourage people to take a more sympathetic, long-term view. And pay more attention to efforts that people in Fukushima are making to get on with their lives.

(Translated from a March 1, 2012, discussion in Japanese. Photographs by Kawamoto Seiya.)