The Robot that Won’t Help You

Science Technology Society Lifestyle Jul 19, 2012
The trash-can robot from Toyohashi University of Technology asks humans to pick up litter that it finds. Professor Okada Michio explains how his team is looking at the ways robots and machines can better communicate with humans.

Communication is the Key

Given the popularity of robots that vacuum your house for you, you might be surprised to hear that the “Sociable Trash Box” does not clean and cannot even pick up the trash by itself. Developed by Professor Okada Michio and others at the Toyohashi University of Technology, the trash-can robot has a USB camera and an infrared sensor installed. The robot moves around the room, searching for litter. When it finds some, instead of picking it up, it turns toward a person nearby and leans its body forward as if doing a bow. With this charming little movement you can imagine the robot saying, “Please help pick up the trash.” 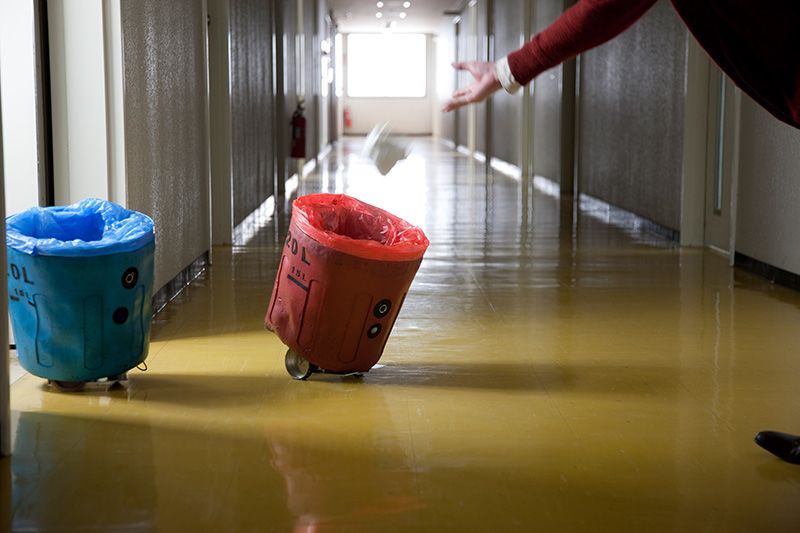 The Social Trash Box getting people to help out.

Many robots are developed with the aim of helping people. From this perspective, a robot designed so that it requires help from people sounds very odd. In a society where humans and robots coexist, the latter will certainly need to have a complete set of functions—but the importance of their communication skills must not be overlooked. 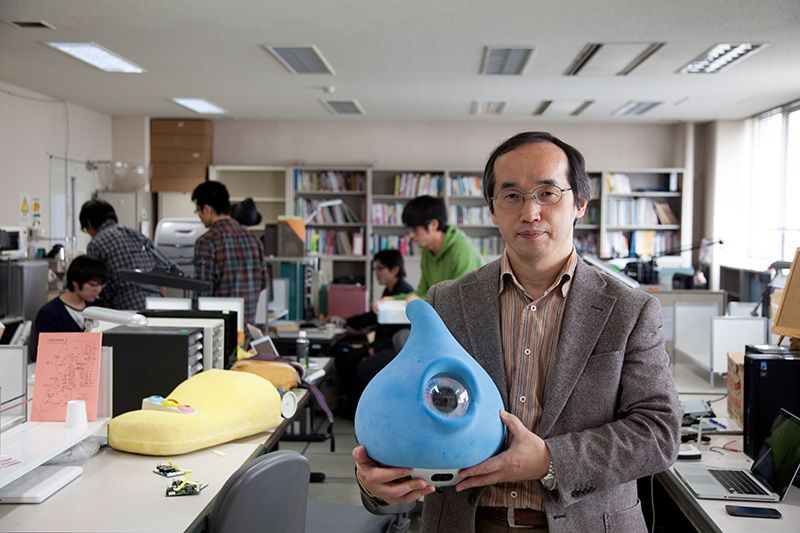 Okada specializes in social robotics and cognitive science. He researches the relationship between humans and robots, using unique and vulnerable-looking robots like the Sociable Trash Box.

“When you buy a drink from a vending machine, you may hear the machine say ‘Thank you’ in a synthesized voice. These are the same words that a shopkeeper would say, but the voice sounds impersonal and you don’t feel that the machine is grateful. Hardly anyone would turn back and reply. This is an excellent example of poor communication between machines and people.” 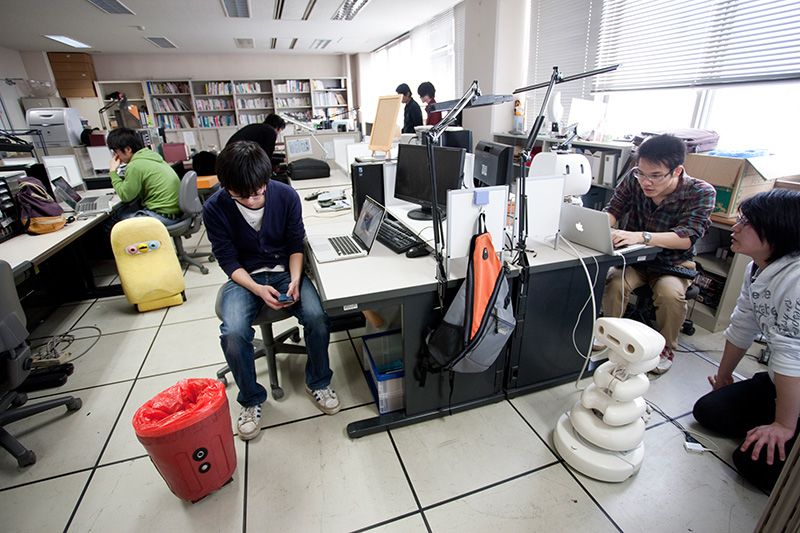 Someday we may have robots with us in our everyday lives.

Words aren’t always necessary to communicate. Babies cry and scream, asking for more milk or a new diaper. They show their satisfaction by becoming quiet. Parents look after their babies by listening to the way they cry and looking at their reactions to work out what they want. Even though there are no words exchanged, a certain form of communication exists between them.

Indeed, rearing an infant is not a one-way process; it involves interaction between parent and child. The baby is cared for and gets the milk that it wants. The mother or father experiences joy in looking after the child and feels the significance of her or his existence to the child. To put it another way, the baby’s helplessness and weakness draw out its parents’ love and support, allowing it to achieve its aims.

Could this natural and unconscious form of human communication also take place between humans and robots? Okada’s research is looking carefully at how such a coexistence might take place. The adorable Social Trash Box uses its weakness as a weapon to coerce the people around it to pick up the trash. The people who help the robot get a strange sense of satisfaction and accomplishment. And of course, if the people around the robot are children, picking up the trash will be a good habit to learn.

Okada notes: “Coexistence between humans and robots is realized when they both create new value for one another, building a win-win relationship.” His research continues.