Building a Bear of a Robot

Science Technology Society Lifestyle Jul 23, 2012
Fujitsu Laboratories Ltd. has unveiled an interactive robot teddy bear that can express emotions and respond to people’s input. The robot is expected to provide companionship for the elderly in care and other facilities and facilitate communication among young children. 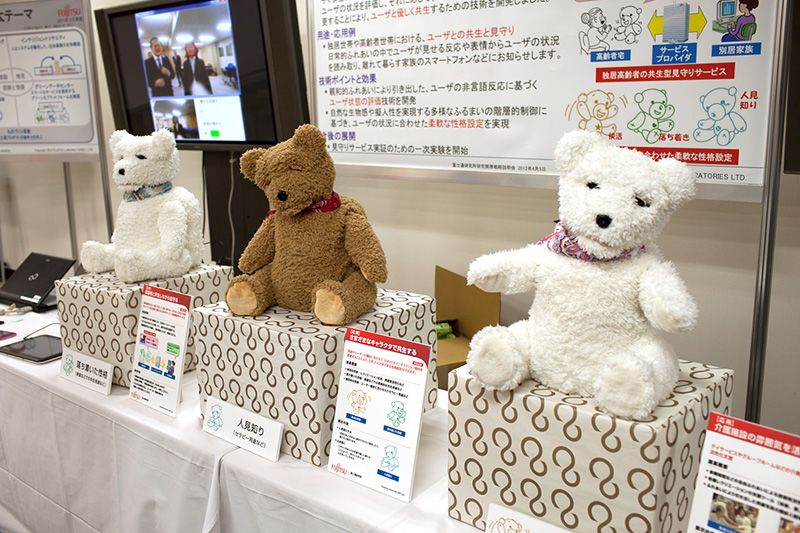 From left to right, the calm, shy, and outgoing teddy bears.

Three cute teddy bears are seated on a table. It soon becomes clear that they are not ordinary toys: indeed, it is easy to forget they are not living creatures. They express delight when somebody approaches and get mad when they are hit on the head. Wave at them, and they wave back and cock their heads in response to what you are doing. They also sigh, nod off when tired, and hum a good tune. These interactive bears are the brainchild of Fujitsu Laboratories Ltd., which designed them to encourage communication among elderly people and teach children communication skills.

“The three teddy bears are all different. One is buoyant, one is calm, and one is shy. Each bear’s character shapes its reactions,” explains Watanabe Ichirō, a senior researcher in Fujitsu Laboratories’ Human Interactions Research Division, which developed the robot.

The cheery teddy bear is perfect for institutional settings because its enthusiastic gestures and responses can liven up the gatherings. The calm animal, by contrast, is good for homes, since its movements are restrained and people are less likely to tire of it.

The shy bear, meanwhile, needs time to open up to people. At first it avoids making eye contact, but in time it grows able to look at people and its actions become more animated.

Each bear robot has 12 built-in motors, enabling 300 movements and expressions through their combined action. It has a tiny camera mounted in its nose, allowing it to detect the user’s face, turn its gaze in that direction, and even acquire information about the user’s emotional state. The robot is also equipped with sensors that let it know when it is being touched or when its paw is being shaken. The bear communicates with a computer that analyzes information from the nose camera and sensors to control its motors. The robot is thus able to respond and interact with the user.

According to Fujitsu Laboratories, the key to developing a robot capable of social behaviors was categorizing and stratifying the software applications that control the actions, the network functions, and the hardware based on the roles they play in the finished device. For example, information obtained from the nose camera is used in the “social behaviors stratum” to make the robots conscious of the person they are with and in the “biological behaviors stratum” to create lifelike movements.

Watanabe explains: “By changing the settings, you can create a character suited to a specific purpose and situation.” This is what makes it possible to customize the bear, creating various personalities for it to meet the needs of the user.

A Good Companion for the Elderly 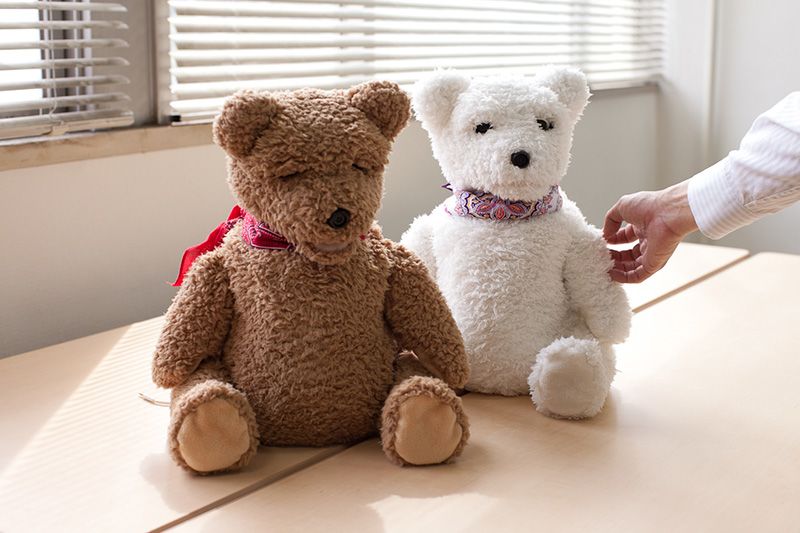 The shy teddy bear (left) will not meet a person’s gaze until they are better acquainted. The vivacious teddy bear (right) gestures a lot and livens up gatherings.

Watanabe hopes the robot will play a role in lessening the isolation some elderly people feel and brighten up their lives. An experiment conducted at a care facility showed that residents who spent time with the robot were more talkative and those who ordinarily showed little emotion began smiling more often.

Another handy feature of the robot is its ability to send videos taken with the nose camera to family members or caregivers in remote locations, giving them a way to confirm that elderly people who live on their own are doing well.

With its cute physical appearance and gestures, the robot teddy bear appeals to women and men of all ages. Its appeal may even be global—it has been a hit at several international exhibits held recently outside Japan. Watanabe’s team will continue testing and fine-tuning the robot so that it can one day have a place in homes and care facilities around the world.