Matsuri Days (1): A Guide to Asakusa and the Sanja Matsuri

Japanese Festivals and the Annual Cycle of Life

Culture Aug 20, 2012
There are said to be anywhere between 100,000 and 300,000 festivals in Japan. Almost every community has its own unique festival, or matsuri, with its unique origins and special features. Matsuri enthusiast Yamamoto Tetsuya provides some background.

The Japanese have a special affection for the traditional festivals, or matsuri, that are highlights of the calendar all around the country. Many of these festivals have close associations with a particular time of year, such as ceremonial rice-planting in the spring and rites to ward off epidemics, typhoons, and agricultural pests during the summer. The autumn harvest brings festivals of thanksgiving, while winter festivals were designed to purify the community before the end of the year and to keep people’s spirits buoyant during the cold weather. The Japanese people’s sense of the changing seasons is depicted in their festivals.

Wishing for a Successful Harvest in the Spring; Giving Thanks in the Autumn

Spring is marked by the planting of the rice fields, a symbol of the start of a new year. One traditional spring festival is called Otaue Matsuri, or “rice field planting festival.” All over the country, people take part in versions of this festival to pray for a successful harvest. In some versions, real seeds are planted in the fields while in other cases the planting process is merely acted out. One of the most famous examples of a festival in which real planting takes place is Otaue Shinji, which takes place in the Sumiyoshi Ward of Osaka every year on June 15. An example of symbolic rice-planting is Onda Matsuri, held in the village of Asuka in Nara Prefecture on the first Sunday in February. 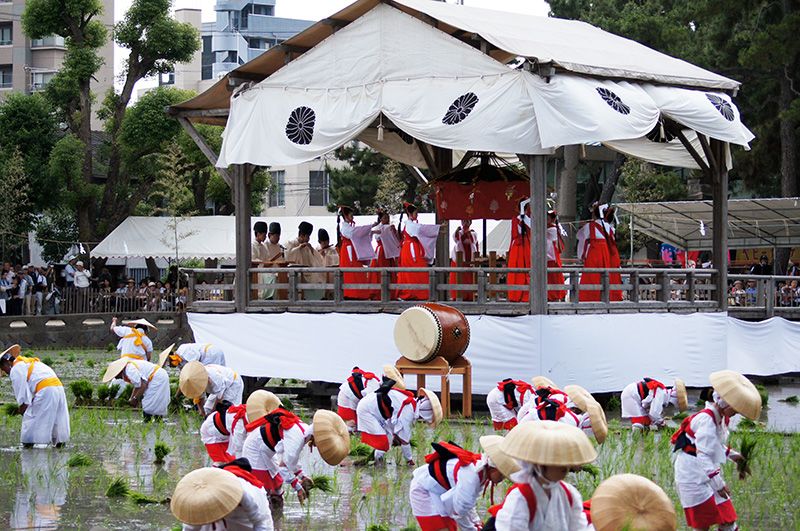 Women perform the “Yaotome no Tamai” (The Rice Paddy Dance of Many Maidens) as part of the Otaue Shinji. (Photo courtesy of Sumiyoshi Taisha)

Balancing out the spring festivals are the harvest festivals in the autumn, held to give thanks for a successful harvest. The most important of these is the Nīnamesai, a court ceremony in which the emperor dedicates the new rice to the gods at Ise Jingū in Mie Prefecture, the most important Shinto shrine. Today, the Nīnamesai is celebrated on November 23 each year, a date marked as “Labor Thanksgiving Day,” a national holiday.

More than 1,000 festivals take place at Ise Jingū alone every year. Of particular note is the Shikinen Sengū, in which the main shrine buildings are completely rebuilt every 20 years. This has been held regularly since the year 690. The next one is in 2013. 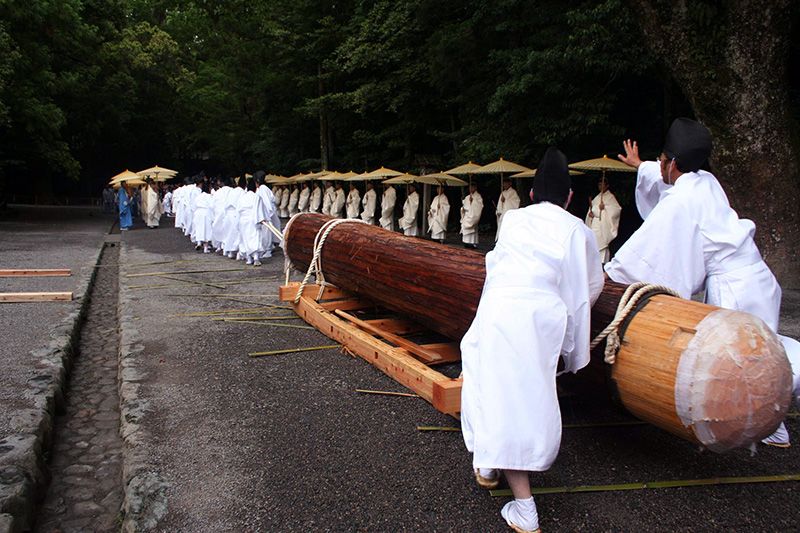 The main shrine buildings at Ise are rebuilt every 20 years during the Shikinen Sengū festival. (Photo courtesy of Ise Jingū)

Summer matsuri are different for urban and rural areas. In cities, frequent outbreaks of infectious diseases during the summer months were believed to be caused by displeased gods and angry spirits. Many traditional summertime festivals were originally meant to ward off illness and disease. Among the most famous are the Gion Matsuri held in Kyoto throughout the month of July and the Tenjin Matsuri in Osaka on July 24–25. Many other areas that had close trading ties with Kyoto suffered similar outbreaks of diseases and developed their own festivals in imitation of the Gion Matsuri. 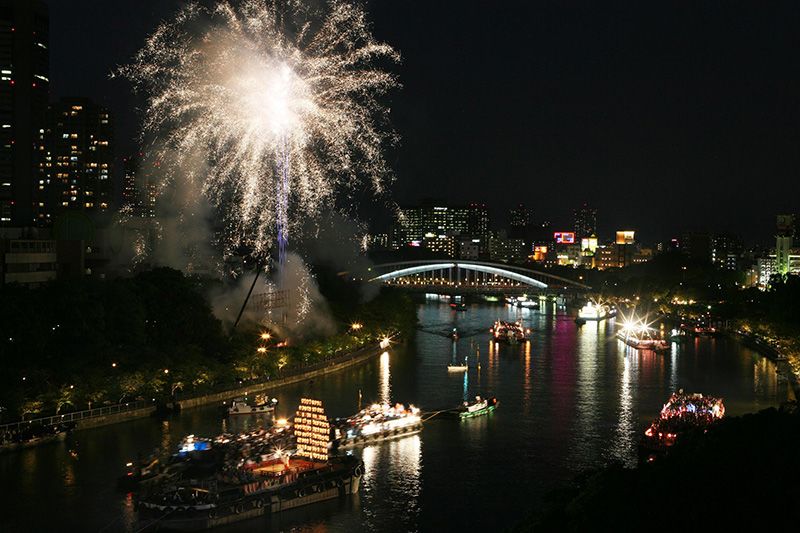 Fireworks light up the sky at the Tenjin Matsuri. (Photo courtesy of Osaka Tenmangū)

People in the countryside faced a different set of problems. Summer was the season when farmers’ crops were at their most vulnerable, under threat from insects, typhoons, and floods. Accordingly, many rural summer matsuri were intended to drive away pests or ward off typhoons. The Nebuta Matsuri in Aomori Prefecture (August 2–7) is a famous example of the former. For the latter, the Etchū Owara Kaze-no-Bon in Toyama Prefecture is well known (September 1–3). 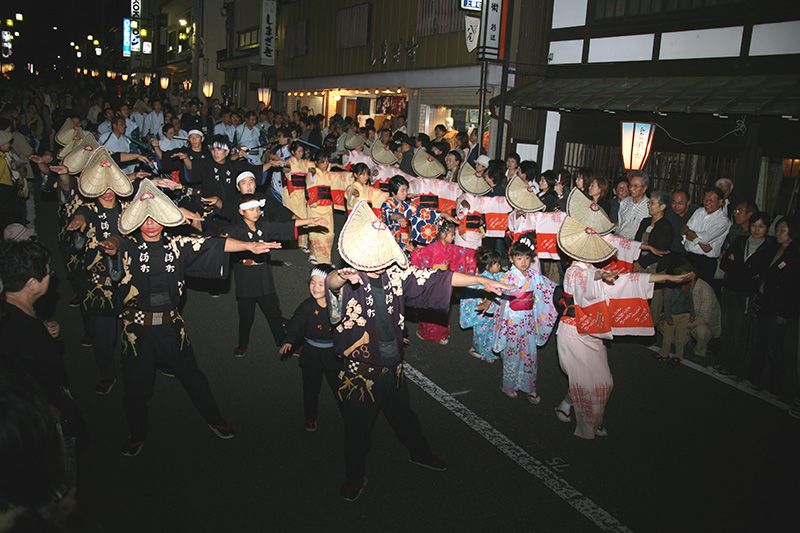 No word is more closely associated with the Japanese summer than Bon, a Buddhist festival that takes place in August to honor the spirits of the dead. Bon takes place throughout Japan; many people take time off work to travel home and visit family graves. A special kind of dancing called Bon odori is performed all over the archipelago at this time of year, bringing communities together to relax in the evening cool after the oppressive heat of the summer days. During the Buddhist ceremony of okuribi, fires are lit to light the spirits of the dead on their way back to the spirit world after their temporary return to earth during the Bon period. The most famous example is the Gozan Okuribi, which takes place in Kyoto on August 16. 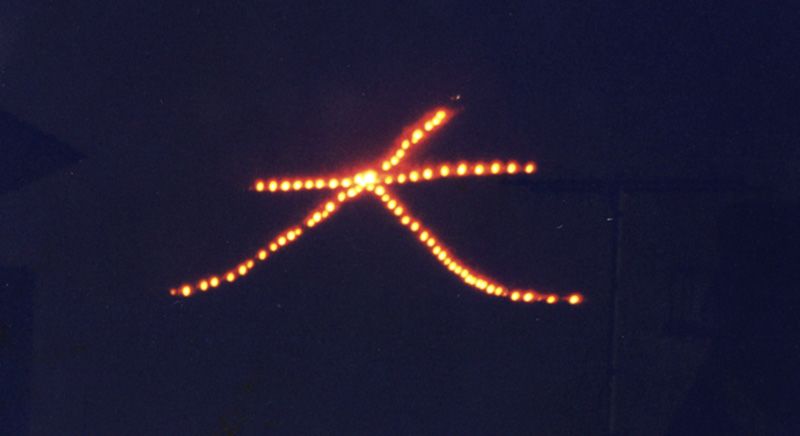 Bonfires in the mountains close to Ginkakuji (the Temple of the Silver Pavilion) in Kyoto. The fires form the shape of the kanji character “dai” meaning great, or big. (Photo courtesy of Kyoto Culture and Citizens Affairs Bureau)

New Beginnings in the Winter

Winter is the down season for farmers—a time for replenishing the spirit while sheltering from the cold. Many winter festivals are based on the idea of purifying and cleansing the soul during this relatively quiet time of year. In some festivals, called hadaka matsuri or “naked festivals,” participants are dressed in nothing but simple loincloths, allowing them to better cleanse their bodies and spirits. The most famous of these occurs in Eyō in Okayama Prefecture on the third Saturday of February. In other festivals, fire plays a central role. The Dōsojin Matsuri in Nagano Prefecture (January 13–15) is a prime example. 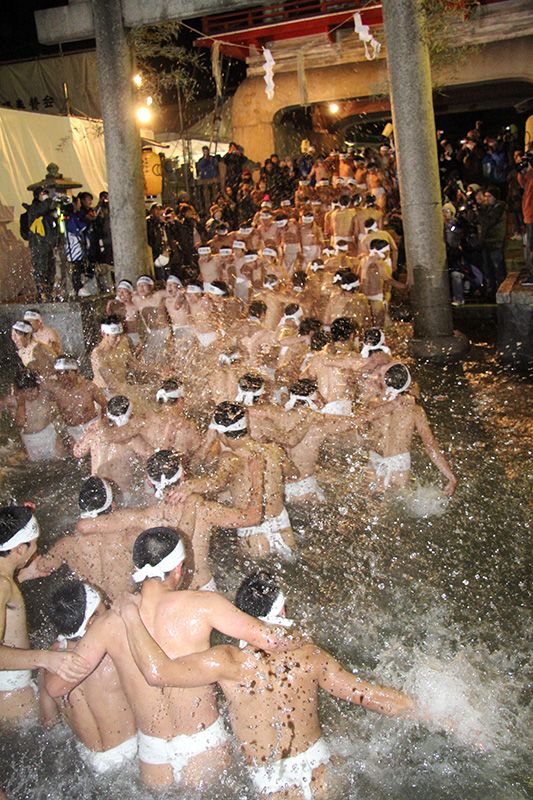 A number of festivals are held in January celebrate the New Year. There is also setsubun at the start of February, which is the last day of the traditional East Asian calendar and signifies the end of winter. Festivals are also used to bring energy and prosperity to towns by attracting tourists and visitors. The Sapporo Snow Festival in the middle of February has been especially successful in this regard. 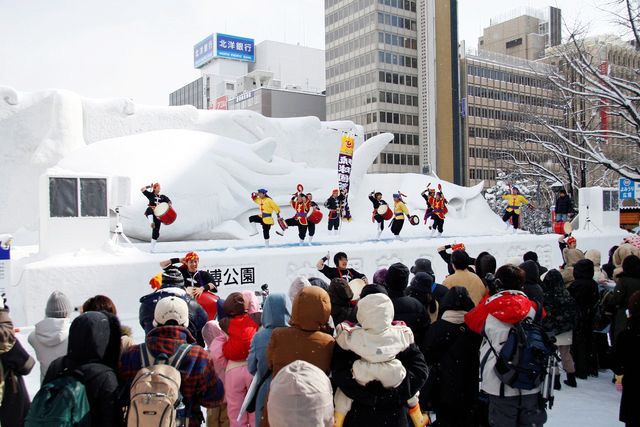 One of a variety of events at the Sapporo Snow Festival. (Photo courtesy of Sapporo Tourism and Cultural Affairs Bureau)

As we have seen, festivals occur throughout the year. Almost all festivals are somehow related either to giving thanks or praying for good fortune. Passed down from generation to generation, the festivals we enjoy today are a vital part of our living culture, and an important part of our national heritage. We should cherish them and hand them on to future generations.

Nothing beats the thrill of being at the festival and soaking up the energy from the crowds of people. Many festivals, such as the Nebuta Matsuri in Aomori Prefecture, allow spectators to take part in the festivities. So cast off your reservations and join in the fun! 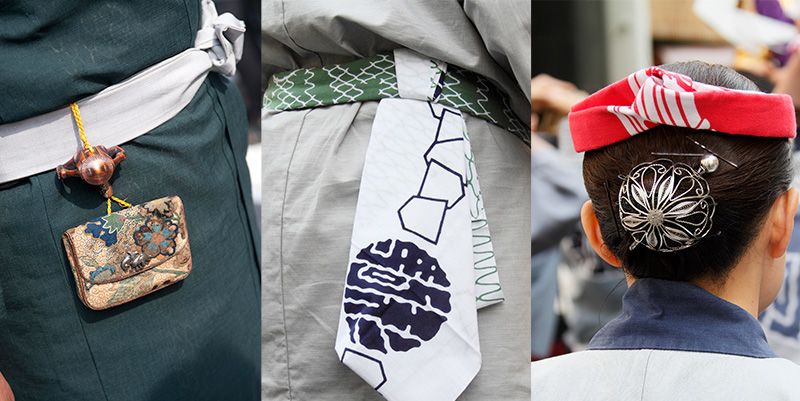 A selection of close-ups showing just a few of the ways in which people dress up for the big day. Many festivals are lively explosions of colorful traditional clothing and accessories. (Photographs by Yamada Shinji and Kodera Kei) 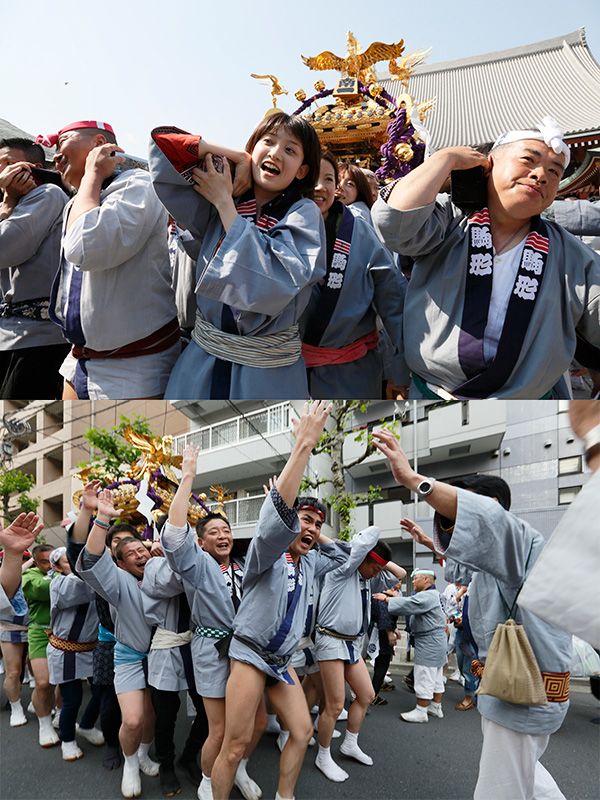 Different areas and groups have their own distinctive traditions when it comes to festival chants and the way they carry their “mikoshi.” (Photographs by Yamada Shinji at the Sanja Matsuri in Asakusa, Tokyo). 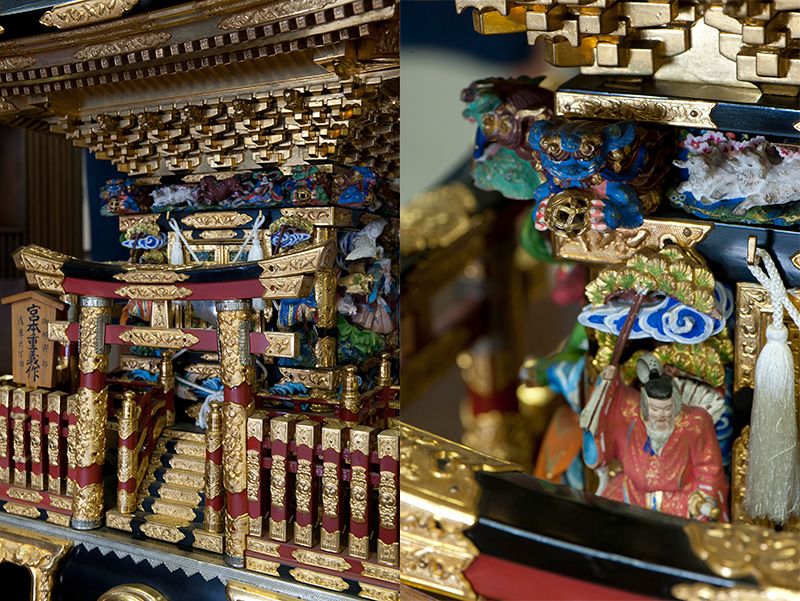 The “mikoshi” are often lovingly carved in intricate detail. Communities take great pride in these special objects, which are at the center of many festivals throughout the country. (Photographs by Kodera Kei) 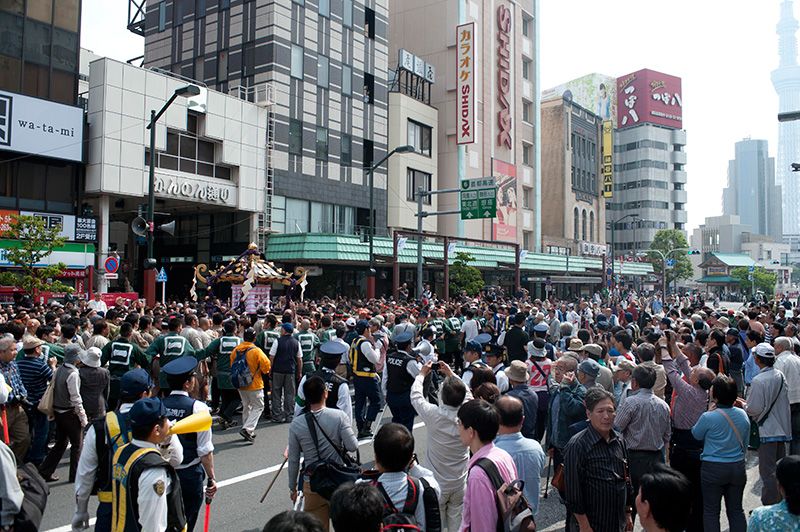 Major festivals can attract more than a million people, so expect big crowds and reserve your accommodation well in advance! (Photograph by Kodera Kei)

Click here for a map showing the locations of some of Japan’s biggest festivals:
JAPAN DATA Festival Map