Culture Guide to Japan Oct 17, 2012
No one knows for sure how many festivals take place in Japan over the course of the year, but estimates vary from 100,000 to 300,000—all of them unique reflections of the history and culture of the local area. Here, we introduce a selection of 20 of the most notable festivals from around the country. For related content, see “Japanese Festivals and the Annual Cycle of Life.” 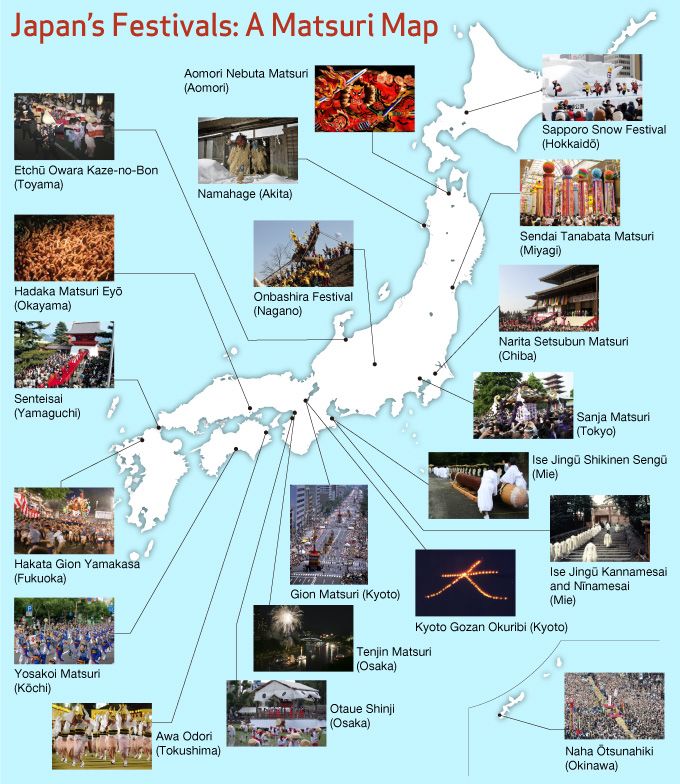 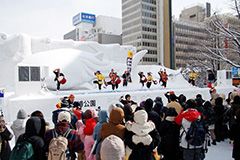 Photo courtesy of the Sapporo Tourism and Cultural Affairs Bureau.

Japan’s biggest winter festival is a celebration of the beauty of ice and snow. At the center of the festival is a remarkable range of sculptures, all constructed from compacted snow. The festival had its humble beginnings in 1950, when local schoolchildren built six snow sculptures in Ōdōri Park. Today, the festival attracts more than 2 million visitors each year, and features a carnival and a wide range of attractions.
Official homepage: Sapporo Snow Festival Executive Committee 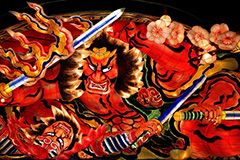 The festival gets its name from the huge illuminated paper floats called nebuta that parade through the main streets of the city. The floats depict heroic figures from history. They are accompanied by large groups of exuberant dancers, many of them dressed in traditional straw hats. The festival is said to hark back to Tanabata celebrations traditionally held in the seventh month of the traditional East Asian calendar. More than 3 million people visit over the five days of the festival. (For more on the Nebuta Matsuri, see: “Festival of Light: Experiencing the Nebuta Matsuri.”)
Official website: Aomori Tourism and Convention Association 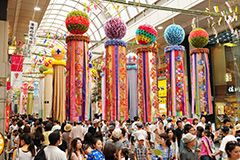 Photo courtesy of the Sendai Chamber of Commerce and Industry.

The city center of Sendai is decorated with a mass of brightly colored decorations for this mid-summer festival, traditionally held on the seventh day of the seventh month to mark the once-a-year meeting of Orihime and Hikoboshi (represented by the stars Vega and Altair). Each of the decorations has a special significance. People make wishes for good fortune and health, success with their studies, as well as a rich harvests and an abundant catch.
Official website: Sendai Tanabata Festival Support Association (Sendai Chamber of Commerce and Industry) 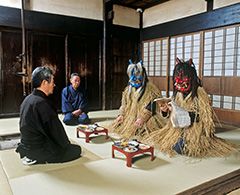 Photo courtesy of the Oga City Commerce and Tourism Division.

Demons with big kitchen knives visit houses in search of disobedient children, shouting menacingly as they come: “Are there any cry babies in this house?” and “Are there any lazy children here?” The Namahage of Oga are welcomed into people’s houses as the servants of the gods, carrying out purifications to ward off disasters and bring abundance and prosperity.
Official website: Namahage Museum 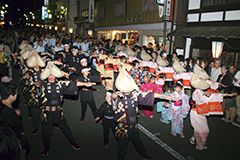 In this nighttime festival, dancers act out the elegant moves of a wordless dance in time to a melancholy melody. The dance is supposed to appease evil spirits that might cause typhoons and strong winds that damage farmers’ crops. Large crowds travel to this small town in the mountains, drawn by the distinctive dances, performed to the melancholy strains of the kokyū, a bowed string instrument. 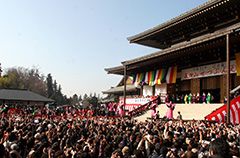 Setsubun marks the day before the start of a new season—nowadays almost always spring. In older times, it was believed that demons and evil spirits were particularly dangerous when the seasons were changing. This belief gave rise to a custom that to this day is still performed all over the country, where beans are thrown to drive demons away. The celebrations at the Naritasan Shinshōji temple are particularly famous. People throw beans and chant the traditional setsubun rhyme, “oni wa soto, fuku wa uchi” (devils out, good fortune in!). People pray for peace, prosperity, and a good harvest.
Official website: Municipal Government of Narita City 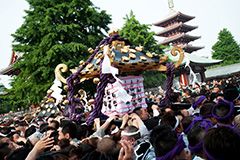 The Sanja Matsuri is one of the biggest festivals in Tokyo’s traditional shitamachi area. Three colossal mikoshi carry the divinities through the streets of Asakusa, while parishioners from 44 local neighborhood groups take it in turns to carry the shrines though their areas in a tour of Asakusa that lasts from dawn till dusk. (For more on the Sanja Matsuri, see: “Experiencing the Sanja Matsuri.”) 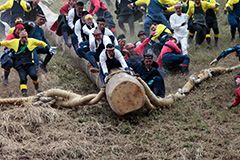 Held in the Year of the Tiger and the Year of the Monkey to rebuild the Shintō structures at the Suwa Taisha. Huge firs are brought from nearby forests for the four corner pillars of the new shrine building. Men ride the logs as they slide down steep slopes to the shrine site, producing a breathtaking spectacle.
Official website: Suwa Tourism Association 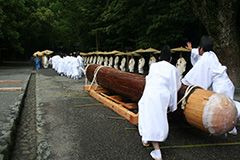 At Ise Jingū, all the main shrine buildings are rebuilt from scratch every 20 years, along with the robes and sacred objects within the shrine precincts, before the spirit of the sun goddess is reintroduced to the new buildings. The ceremony dates back to the year 690. (See our photos of Ise Jingū in "A Year in the Life of Ise Shrine.")
Official website: Jingū Administration Office 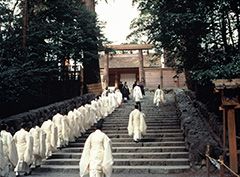 In the Kannamesai festival, the year’s new rice harvest is offered to Amaterasu, the sun goddess, to pray for a rich harvest and the continued health of the imperial family and the Japanese nation. In the Nīnamesai the Emperor’s representative offers the gods a ceremonial gift from the year’s harvest.
Official website: Jingū Administration Office 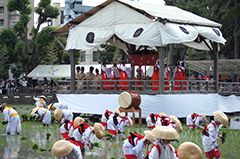 This festival is believed to have started when the empress consort Jingū (believed to have ruled 201–269) gave instructions for a sacred field to be planted with grains for the gods. The rice-planting ceremonies held in the fields belonging to the Sumiyoshi Taisha are famous as the most ornate and most impressive of all the rice-planting ceremonies in Japan. As well as the actual rice-planting, the ceremony also involves ceremonial dances performed by shrine maidens in traditional red and white robes. 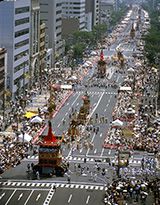 A view of the Yamahoko parade. (Photo courtesy of the Kyoto City Tourism Association)

The Gion Matsuri dates back more than 1,000 years to the Heian Period. It has its origins in the Gion Goryōe, a festival to pray for delivery from outbreaks of epidemic disease. The festival runs for the month of July; the highlights are the nighttime displays of yama and hoko festival floats. These take place on the nights of the 14th through the 16th, and are accompanied by traditional music performances. On July 17, 33 festival floats are paraded through the streets. Numerous related events take place throughout the month at the Yasaka Shrine and throughout the area. (For more on the Gion Matsuri, see “Gion Festival Displays Kyoto’s Lavish Hospitality.”) 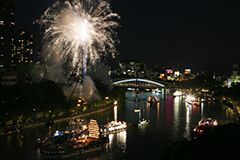 Fireworks light up the sky at the Tenjin Matsuri. (Photo courtesy of Osaka Tenmangū)

Said to date back to 951, two years after the Tenmangū was built to appease the spirit of Sugawara no Michizane (845–903), a Heian courtier and scholar whose angry spirit was believed to be causing disasters after he died in exile. The festival climaxes in a procession of several thousand people who descend on the river, where the god is loaded onto boats for a stunning river parade and fireworks display. 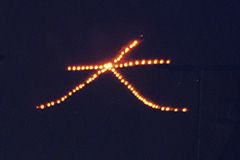 Photo courtesy of the Kyoto Culture and Citizens Affairs Bureau.

The practice of lighting huge bonfires on five mountains around Kyoto during the Bon festival probably dates back to the seventeenth century. The five bonfires, which depict boats and kanji characters with Buddhist significance, are lit between 8 pm and 8:30 pm on the night of August 16 and last for around 30 minutes. The fires are supposed to light the souls of the dead on their journeys back to the spirit world. 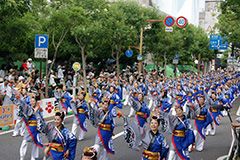 Photo courtesy of the Kōchi Chamber of Commerce and Industry.

A modern festival born in 1954 in an attempt to give people something to celebrate during the economic slump of the times. Yosa koi means “Come at night” in the local dialect. Approximately 190 dance groups and 200,000 people take part, designing their own costumes and dance using wooden clappers called naruko. Each group dances to music based on an original tune called Yosakoi bushi. 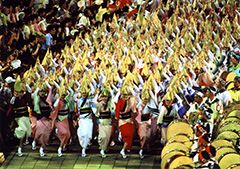 The famous words of the festival song say, “Some fools dance, and some fools watch. You’re a fool either way, so why not dance?” With a history stretching back 400 years, the Awa Odori is one of the best known of all Japanese folk dances. The festival is open to anyone who wants to join in. There are different costumes and dances for men and women. The women’s dance features graceful movements and colorful costumes topped by traditional conical hats made from sedge. (For more on the Awa Odori, see “Why Not Dance? The Awa Odori Festival (Video).”) 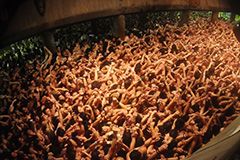 Photo courtesy of the Okayama Chamber of Commerce and Industry.

Believed to date back to the beginning of the 16th century, when people competed to obtain good luck talismans. After a Buddhist ceremony in the main prayer hall of the Saidaiji Kannon Hall, approximately 9,000 men dressed in loincloths engage in a fierce battle over two wooden sacred sticks tossed into the crowd by temple priests at midnight. The victors are believed to enjoy good fortune and happiness. 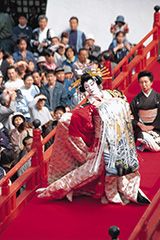 Based on a ceremony held to honor the child emperor Antoku on the day of his death at the naval Battle of Dannoura near Shimonoseki in 1185. The festival takes place at Akama Shrine, where the emperor is enshrined as the chief deity. The highlight of the festival is the procession of court women, “prostitutes,” and geisha dressed in court costume. The shrine ceremony involves an oxen-drawn palanquin to Isaki, where the drowned body of the emperor is said to have been discovered by fishermen. 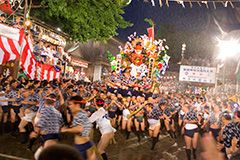 A festival with a history that goes back 760 years, held at Kushida Shrine in Hakata. Fewer than 30 men hurtle through the streets carrying huge floats weighing up to a ton, while still more push from behind. On the final day, the seven floats leave the shrine precincts in order and rush through streets of Hakata in the early morning hours. (For more on the Hakata Gion Yamakasa, see: “The Oiyama Race: A Rite of Passage for Men in Fukuoka.”) 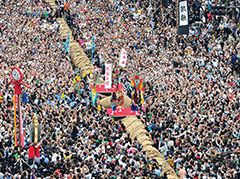 Photo courtesy of the Office of Conservation Society of Naha Giant Tug of War.

Giant tug-of-war competitions were traditionally held in Okinawa to pray for rain and an abundant harvest. In Naha a tradition grew up whereby towns would compete for prestige and bragging rights. After several years in abeyance, it was revived in 1971, the year before Okinawa reverted to Japanese sovereignty. Thousands of people take part in the contest, along with people dressed up in costumes dating back to the days of the independent Ryūkyū Kingdom.
Official website: Office of Conservation Society of Naha Giant Tug of War