The Renewable Outlook in Japan

Building a Floating Wind Farm Off the Fukushima Coast

Science Technology Society Lifestyle Oct 19, 2012
After being devastated by the Tōhoku earthquake and nuclear disaster last March, Fukushima Prefecture is now looking to renewable energy as a new area of industrial development. Tests of the world’s first large-scale offshore floating wind farm are underway, and hopes are high.

The Eyes of the World on Floating Wind Power

In March 2012, the Fukushima prefectural government published a revised edition of its vision on promoting renewable energy (available here in Japanese only). In this document the prefecture sets a goal of meeting 100% or more of its energy needs through renewable sources by 2040. One key to meeting this target is expected to be wind power, and an important first step is the testing of a floating wind farm.

Marine wind is typically strong and steady, making it ideal for wind power generation. Moreover, offshore facilities to generate power from it do not present the noise or visual pollution problems of land-based wind farms. Given these factors, a number of nations in the West that now employ more land-based wind power are eagerly looking to the potential of offshore wind farms, and construction is already underway in many places. Britain is particularly focused on offshore wind power, with plans for 7,000 turbines and 33 million kW of marine wind power generation by 2030. This would cover one third of British energy needs.

The Japanese government has also given marine wind power a key role in its renewable energy plan. The Fukushima wind farm is the flagship project in the vanguard of several construction projects now underway in Japan. In the third supplementary budget of 2011, the government allocated ¥12.5 billion toward the rebuilding of Fukushima. The Ministry of Economy, Trade, and Industry has hired a consortium of 11 organizations including Marubeni, the University of Tokyo, Mitsubishi Heavy Industries, and Nippon Steel Corp. to handle the Experimental Offshore Floating Wind Farm Project. 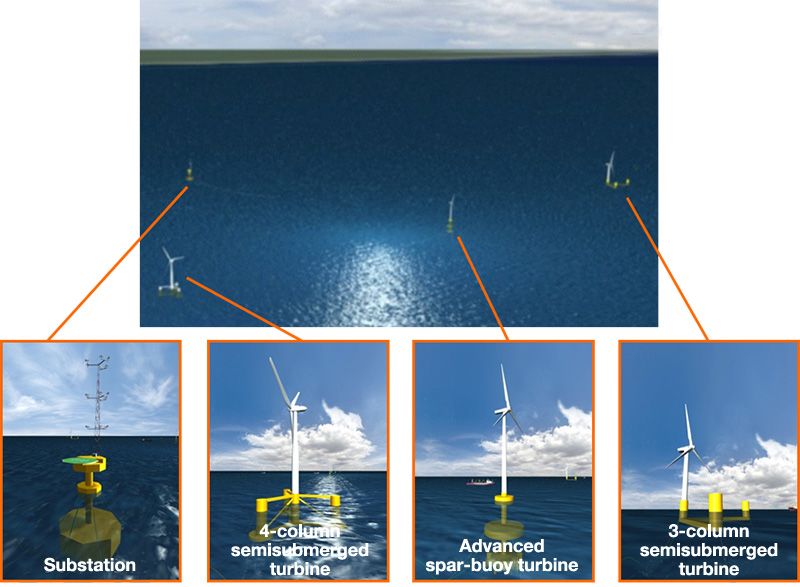 The total cost of the project is ¥18.8 billion. In stage one, to be completed by the end of fiscal 2013 (March 2014), the consortium will build the first 2 MW marine wind power facility. It will evaluate the floating platforms and turbines, develop various technological components including high-performance corrosion- and stress-resistant materials, establish measurement methods, and collect basic meteorological and oceanographic data. In stage two, the experimental research phase to run through fiscal 2015, the goal is to build two 7 MW wind turbines—some of the largest in the world—and pursue commercialization of the technology.

What makes the plan unique is the use of floating turbines. Western countries’ marine wind farms tend to stand in relatively shallow waters, allowing the use of fixed-foundation turbines built on the ocean floor. However, the waters off the Japanese coastline that offer the most promise as wind-facility sites are more than 50 meters deep, meaning that fixed turbines would be prohibitively expensive.

The consortium will make use of floating platforms, whose costs change only slightly whether the water is 100 or 200 meters deep. They represent a new technology that only began to be tested a few years ago in Norway and Portugal. The Fukushima project will be a step toward the world’s first large-scale floating wind farm.

Leading the project is Ishihara Takeshi, a professor of civil engineering at the University of Tokyo. Ishihara sees a wealth of benefits from marine power generation in Japan.

“Because the nation is relatively small and has a lack of flat land to use, large-scale land-based wind power generation is extremely challenging in Japan,” notes Ishihara. “Ocean winds are both stronger and more consistent, and Japan’s territorial waters are much larger than its land mass. While Japan ranks just sixty-second among the nations of the world in terms of its land area, its territorial waters and exclusive economic zones combined give it the sixth largest area.” 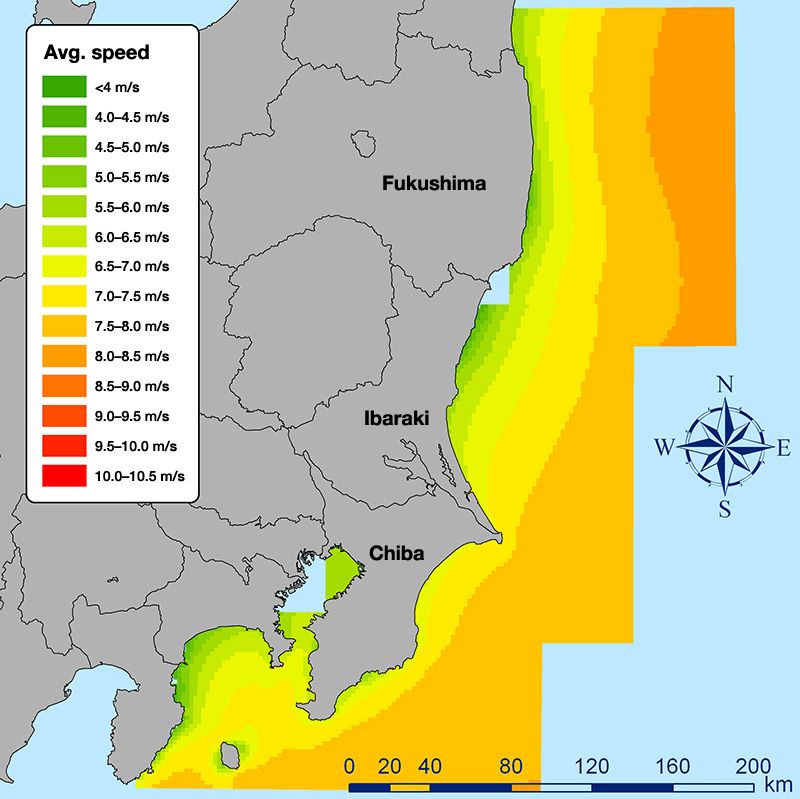 Floating wind farms can be utilized throughout Japan. For nearly a decade, Professor Ishihara has had his eye set on Fukushima as a prime location—the prefecture’s wind speed, ocean depth, and broad area available for construction make its coastal waters ideal for projects like this. What is more, the transmission grid already in place in the prefecture for nuclear and thermal power can also be used to transmit marine wind power, greatly reducing costs.

The construction of a large-scale wind farm could go a long way toward revitalizing Fukushima’s industry. The marine turbine plant and research and development facilities will be concentrated in the port of Onahama in Iwaki, Fukushima, with the goal making marine wind power a regional industry.

Ishihara notes that Fukushima already has an airplane and auto industry, as well as a large number of battery and motor plants, making it ideal for parts procurement. The giant marine turbines—160 meters in diameter and 200 meters tall, with the blades alone 80 meters long—cannot be manufactured and shipped from a remote location, meaning manufacturing and assembly must take place near the Fukushima coast. Onahama will be the production base, meaning continual employment opportunities in both manufacturing and maintenance. 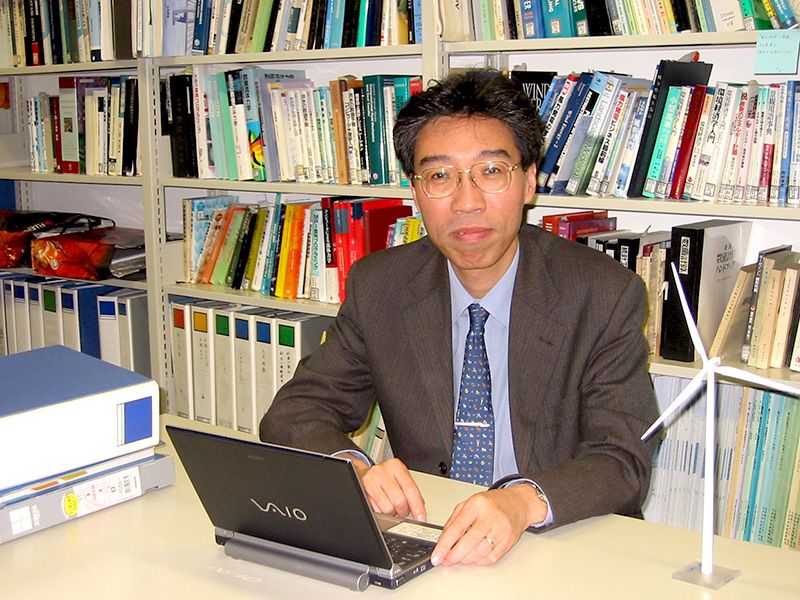 Another key issue is the wind farm’s coexistence with the region’s important fishing industry. The research team is looking into ways to ensure that the turbine platforms attract fish to the area, acting as a “marine pasture” and helping to improve the fishing grounds while providing stable power production. Surveys of surrounding waters and fishing-related experiments are now underway.

Ishihara says that unlike oil, which must be searched for and extracted, wind energy can be harvested in the same area repeatedly, much like an agricultural crop. It thus offers simultaneous solutions to environmental, economic, and energy issues. Hopes are high that wind power will serve as an engine for the revitalization of Fukushima.