Society Culture Nov 15, 2012
The iconic red-brick façade of Tokyo Station’s Marunouchi Building is one of the capital’s most beloved landmarks. A major renovation project has recently restored the building to its original glory for the first time since the war. At the luxurious Tokyo Station Hotel inside the station building, special displays allow visitors to experience a taste of the station’s history as they enjoy the hotel’s unparalleled modern conveniences.

On October 1, 2012, the main red-brick concourse building of Tokyo Station reopened to the public after major renovations. For the first time in more than 60 years, the station has been restored to the way it looked when it was originally built nearly a century ago, in 1914. Long cherished as a symbol of the city, the grand station was designed by Tatsuno Kingo, revered as the father of modern Japanese architecture. The recent reconstruction work restored two domes and a portion of the main building’s third floor that were destroyed during an air raid in May 1945. For the first time in nearly seventy years, the station once again looks the way its architect intended.

The reconstruction project began in 2007 and lasted five years, at a cost of some ¥50 billion. Work was also carried out to increase the available floor space. At 43,000 square meters, the reopened station is now 2.2 times larger than it used to be.

A New Look for the Luxurious Station Hotel

Among the state-of-the-art visitor facilities inside the reopened station are the luxurious 150-room Tokyo Station Hotel and a JR Travel Service Center specially designed to cater to the needs of foreign visitors to Japan. A comprehensive refurbishing has given the hotel a new look featuring European-style chandeliers and stylish white walls. But the hotel’s proud past has not been forgotten, and special displays have been installed to allow guests to relive the glories of bygone days. One item that has attracted particular attention in the Japanese media is a replica of the timetable for the express sleeper Asakaze, which plays a crucial role in the plot of the famous murder-mystery novel Points and Lines (Ten to sen) by Matsumoto Seichō. The timetable is displayed outside room 2033, where Matsumoto was staying when he had the idea for the novel.

The hotel has played host to many other illustrious authors, including pioneering detective novelist Edogawa Rampo (1894–1965) and Kawabata Yasunari (1899–1972), the first Japanese writer to win the Nobel Prize. To commemorate the hotel’s rich literary heritage, every room contains writing paper evocative of the traditional Japanese manuscript paper that these famous writers would have used to write their masterpieces. 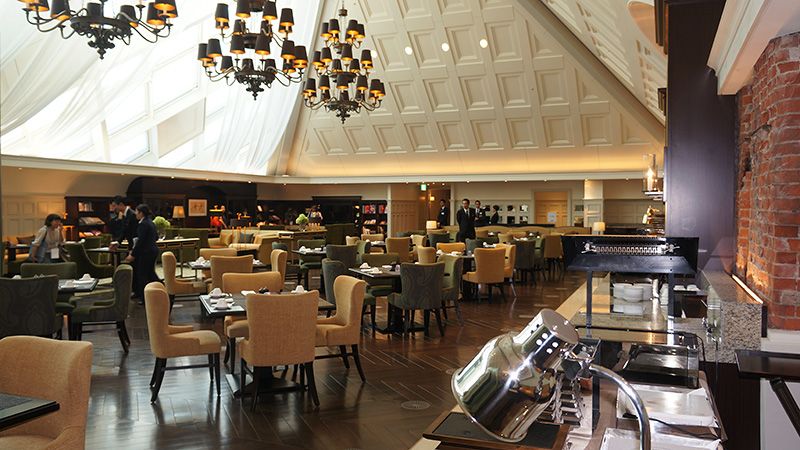 The airy, expansive “Atrium” guest lounge on the fourth floor of the Station Hotel. The room is brightly lit by natural lighting that comes in through the skylight window in the roof. 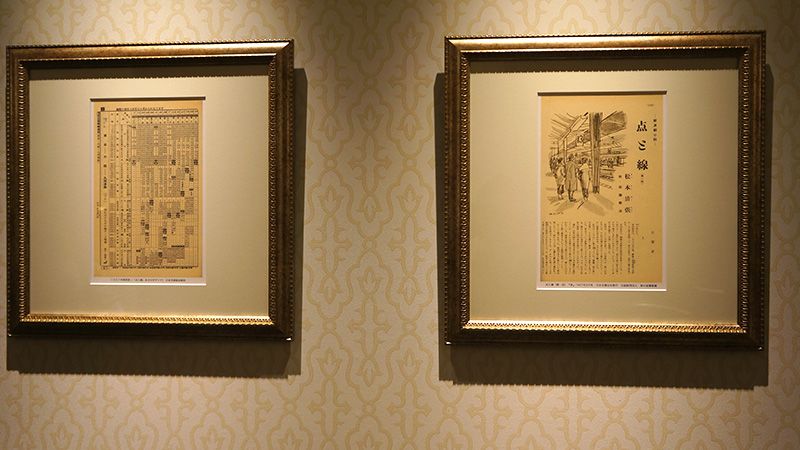 Reproductions of the opening installment of Matsumoto Seichō’s novel Ten to sen and the timetable of the Asakaze express, which plays a crucial role in the story.

Foreign visitors can exchange their Japan Rail Pass vouchers at two locations in Tokyo Station: at this new JR East Travel Service Center and at the JR Central (JR Tōkai) Ticket Center by the Central Yaesu exit. (The temporary ticket office close to the Yaesu North exit closed in September 2012.)

The JR East Travel Service Center is well set up to deal with the needs of foreign travelers. The center’s travel agency, tourist information center, left luggage counter, and currency exchange bureau (with four ATMs) are all able to provide customer services in English, Chinese, and Korean as well as Japanese. (Luggage services and currency exchange are in Japanese and English only.) The center is open from 7:30 am to 8:30 pm, 365 days a year.

Here, travelers can buy rail tickets, rail passes, and arrange package tours, hotel accommodation, and bus tours. The tourist information desk allows visitors to check their email or browse the web using complementary PC stations or free WiFi, in addition to consulting with the counter staff. The luggage counter will temporarily hold luggage and also lets you send bags to destinations in Japan and overseas as well as directly to any airport in Japan. There is also a porter service for customers traveling on services including the JR East Shinkansen, Narita Express, or Hato Bus, with reservations accepted until 6pm. There is also a service that lets travelers send their luggage ahead to any hotel within the 23 central wards of Tokyo or any of the official hotels attached to the Tokyo Disney Resort by 5pm the same day, as long as they make the request by noon.

The currency exchange window can deal with 33 foreign currencies. The ATMs are compatible with foreign cash cards and credit cards. 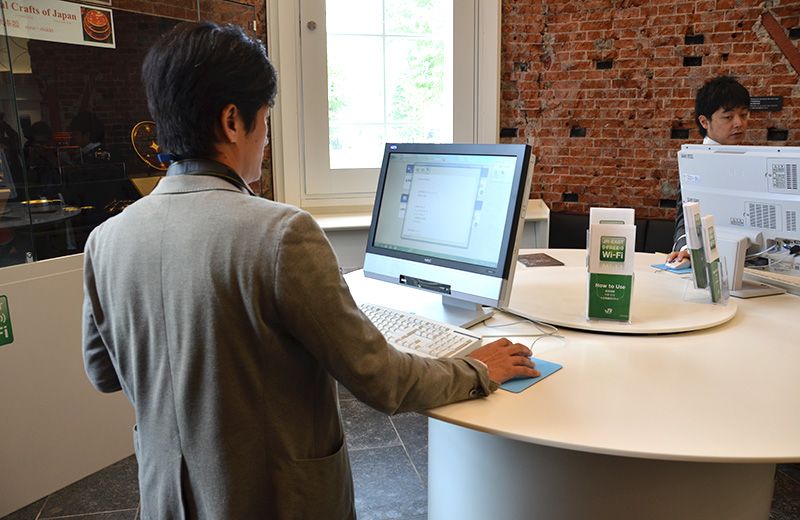 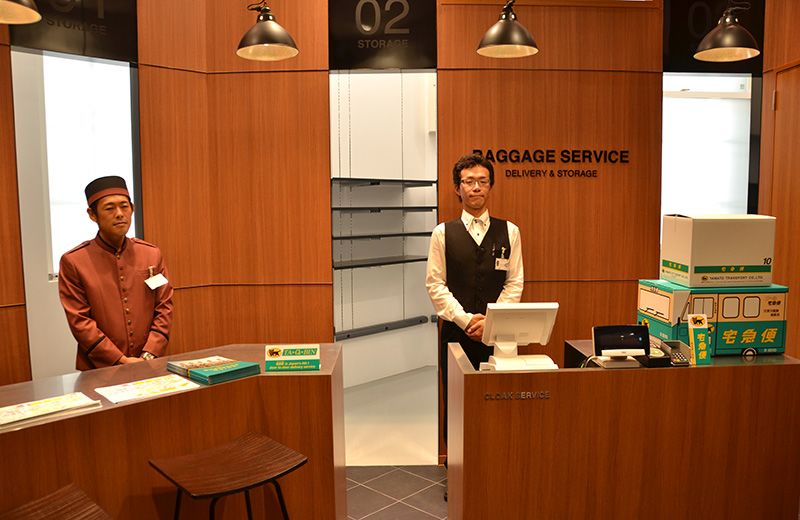 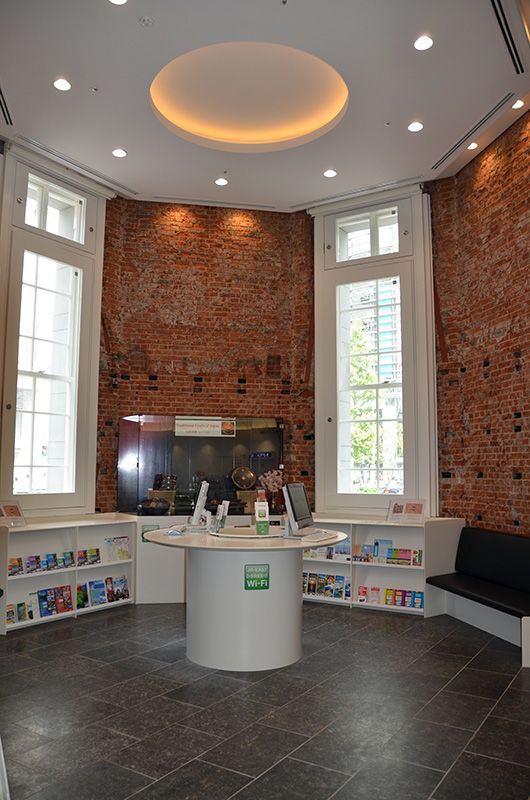 In a corner of the travel service center, the famous brick walls of the station building are left exposed just as they were when the station first opened.

(Information current as of October, 2012)