Culture Jun 23, 2017
The fermented soybean food nattō is divisive even in its homeland of Japan, due to its powerful smell and viscous texture. These qualities have also proved a barrier to export, despite recognition of the food’s health benefits. Now manufacturers in Ibaraki Prefecture are pushing a new form of nattō to foreign consumers, developed to reduce the effect of its more off-putting features.

No Accounting for Taste

A Japanese food manufacturer had a shock encounter when traveling in the United States. Ogawara Kazunori heads the Ibaraki company Asa Ichiban, which produces nattō: sticky, fermented soybeans with a powerful odor. During his visit, an American confided to him, “I eat nattō in salad, but only after I’ve washed all the gunk off in a bowl.” 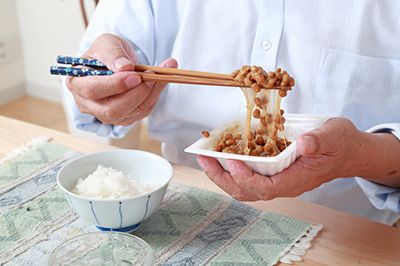 Nattō in its traditional, sticky form. (Photo by Pixta)

For Japanese people, the viscous nature of the food with its web of sticky strings is what makes it nattō. For Ogawara, removing that was almost unthinkable. However, the American he spoke to found the texture an unbearable obstacle to enjoying the nutritional benefits. The smell was also a problem at first, but over time it came to seem tolerable and even pleasant.

The high nutritional value of fermented foods is widely touted. Research further suggests that the enzyme nattokinase, found in nattō, can break down blood clots that lead to strokes or heart attacks. Nattō also contains Vitamin K2, which helps prevent osteoporosis, and a polyamine that may have anti-aging properties.

Ogawara thought that if he could make nattō without the stringy texture, it might catch on outside of Japan. Nattō is made by fermenting steamed soybeans with a variant of the bacterium Bacillus subtilis, but there are other variants that result in fewer strings. He took the idea back to Japan, where he persuaded the Industrial Technology Institute of Ibaraki Prefecture to work on developing the product with an eye to commercialization. 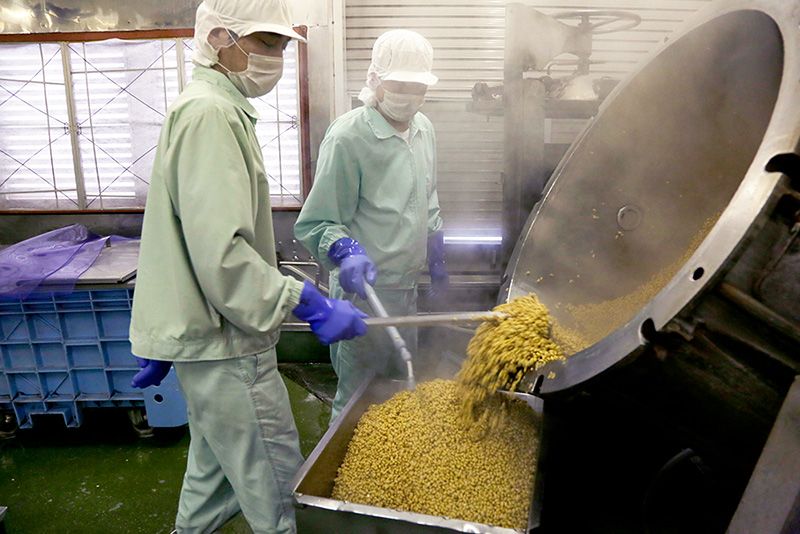 Nattō Slow to Catch on Overseas

Domestic sales of nattō for household use amounted to ¥214 billion in 2016, according to figures from the Japan Nattō Cooperative Society Federation. Sales for business use, as in hotels and restaurants, are estimated to be around 2% of the above. This means that the total market for 2016 was some ¥218.4 billion, representing a healthy 7.7% rise from 2015.

The market had entered a steady decline after peaking in 2004 at ¥205.4 billion. It plunged to ¥173.0 billion in 2011, as major nattō-consuming prefectures like Fukushima and Ibaraki suffered severely from the effects of the Great East Japan Earthquake. Demand then recovered from 2012 due to home-cooking and healthy-eating trends. In 2015, sales topped ¥200 billion for the first time in a decade, leading in to the record-breaking total of 2016.

The problem now is overseas sales. Despite an increased taste for Japanese food among foreign consumers—driven in part by UNESCO’s designation of washoku (traditional Japanese cuisine) as intangible cultural heritage—the JNCSF reported that exports of nattō reached just 750 tons in 2015. The slight increase of 50 tons from 2014 failed to match industry hopes.

Asa Ichiban produces 1.1 million packs of nattō each month, and foreign sales have long represented 20%–30% of its overall total. As acting plant manager Ōhashi Shigeru explains, however, “Even if they’re overseas sales, the buyers are mainly Japanese.” How to win foreign consumers has been a major conundrum. 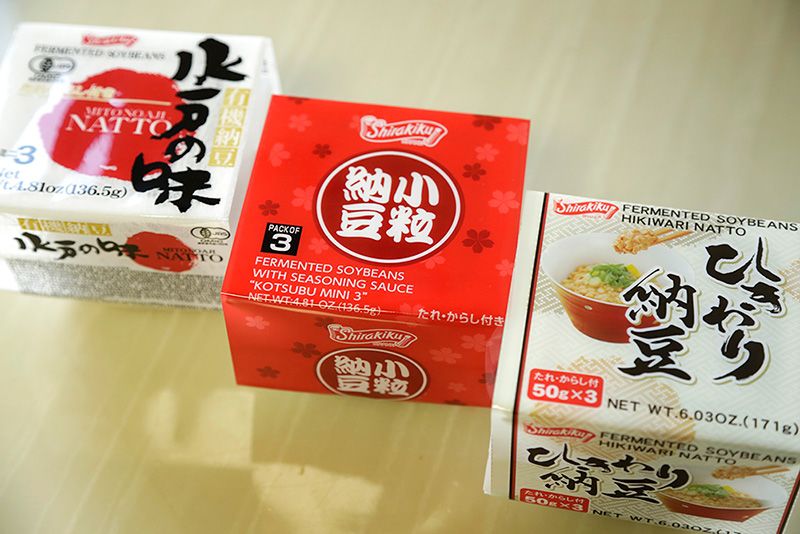 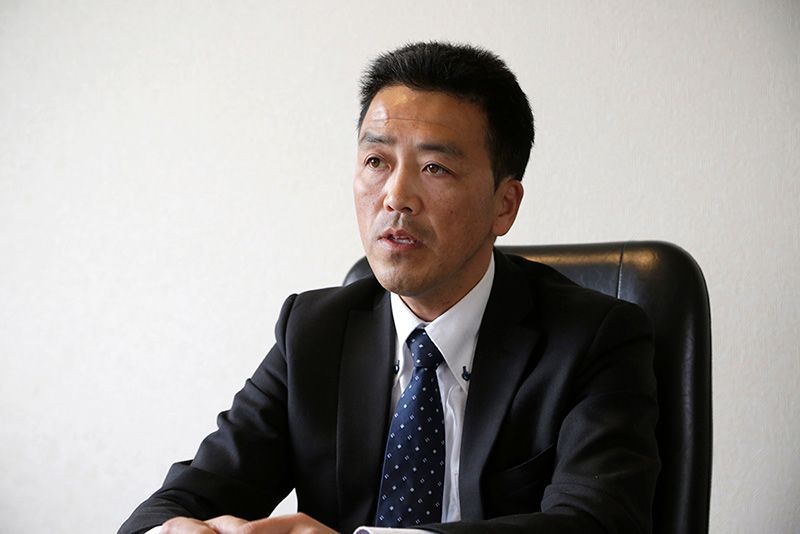 In 2014, the Industrial Technology Institute applied its most highly rated bacteria strain to develop Mamenoka, a version of nattō that creates fewer strings. It was decided to make the new product a prefectural brand. In addition to Asa Ichiban, the four companies Kanasagō, Higeta Shokuhin, Kikusui, and Tōkō Foods are selling goods under the brand.

Mamenoka produces around 25% fewer strings than ordinary nattō and is around a third less sticky when mixed. Although the basic odor is the same, it is not so strong and less apt to spread to the surroundings. The project supervisor, Fujiwara Hiroshi, has described how the name’s emphasis on a pleasant smell—Mamenoka means roughly the “aroma of beans”—reflects Japanese pride in the distinctive food. The beans, meanwhile, remain readily detachable when mixed, so they are easier to eat with a fork or spoon. 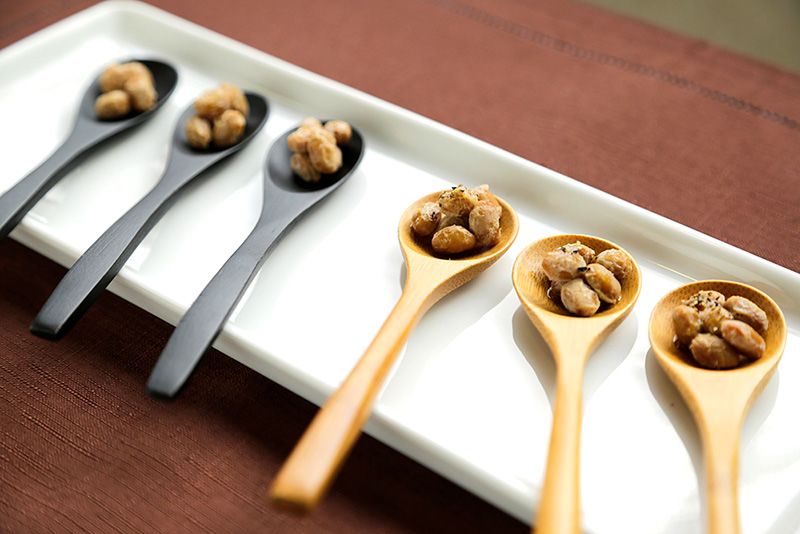 Mamenoka made its foreign debut in January 2015, when Asa Ichiban took it to the Sirha International Hotel, Catering, and Food Trade Exhibition in Lyon, France. Ibaraki-born Jinbo Yoshinaga, head chef at the Hatake Aoyama restaurant in Tokyo, was asked to think of recipes that would make nattō a good fit with French cuisine. He devised dishes matching Mamenoka with fermented butter and foie gras. 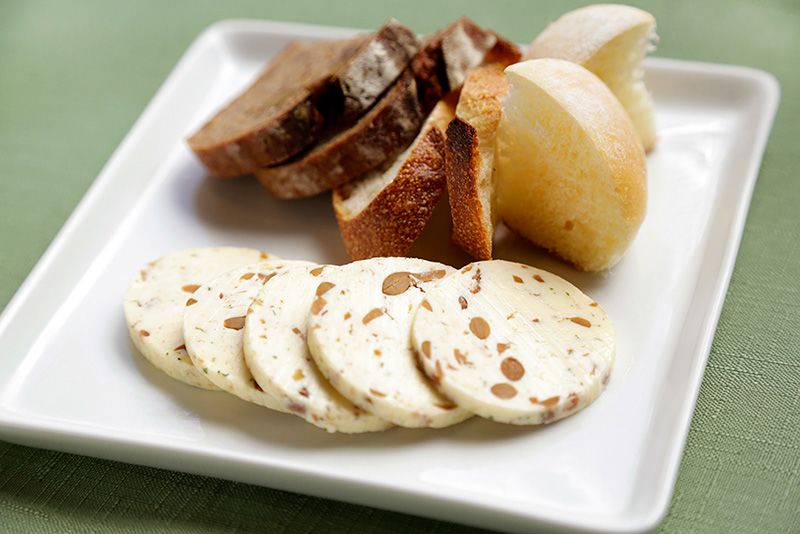 Mamenoka with butter, sliced in the foreground, goes well with bread.

Sellers promoted its health qualities while highlighting how well it went with wine, cheese, butter, and fresh cream. Visitors to the exhibition ate around 2,000 nattō based samples each day. The next challenge was the Anuga food fair in Cologne, Germany, in October 2015. This time, Mamenoka was matched with mashed potatoes.

The other Ibaraki companies have been working hard to develop their own products. Kanasagō has created an easy-to-eat nattō paste in jars, as well as waffles whose ingredients include soy milk and Mamenoka. Kikusui has used the brand to make a nattō-based dressing. 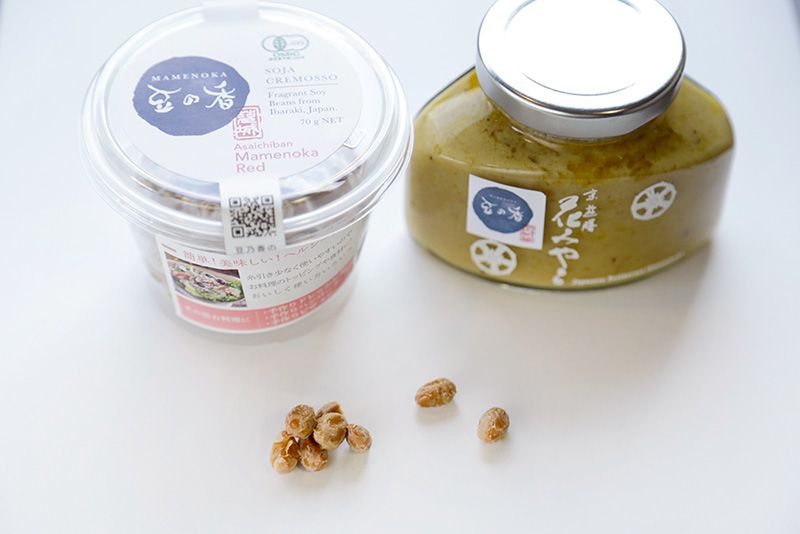 Mamenoka (left), alongside a dip sauce consisting of 20% organic Mamenoka.

There is still a lot of work to do. “In March, there was a trade fair sponsored by the Japan External Trade Organization in Los Angeles,” Ōhashi explains. “Nattō with strings is already common in Los Angeles, so we’re targeting wealthy consumers farther north, in the San Francisco Bay Area and Seattle.” In April, Ibaraki Prefecture withdrew from involvement in the Mamenoka project, leaving the companies to pursue their activities individually. While they would like to enter European markets, issues with chilled storage mean that their main focus is the United States and Southeast Asia.

“House Foods America is one of the biggest tōfu producers in the United States, and is tremendously influential in promoting tōfu-based recipes,” Ōhashi notes. “We have also suggested several recipes using Mamenoka, and this has increased uptake among foreign consumers. At first, we hope to get them used to the less stringy Mamenoka variety. Then, once they see the health benefits, our dream is to hook them on the stringy nattō.” 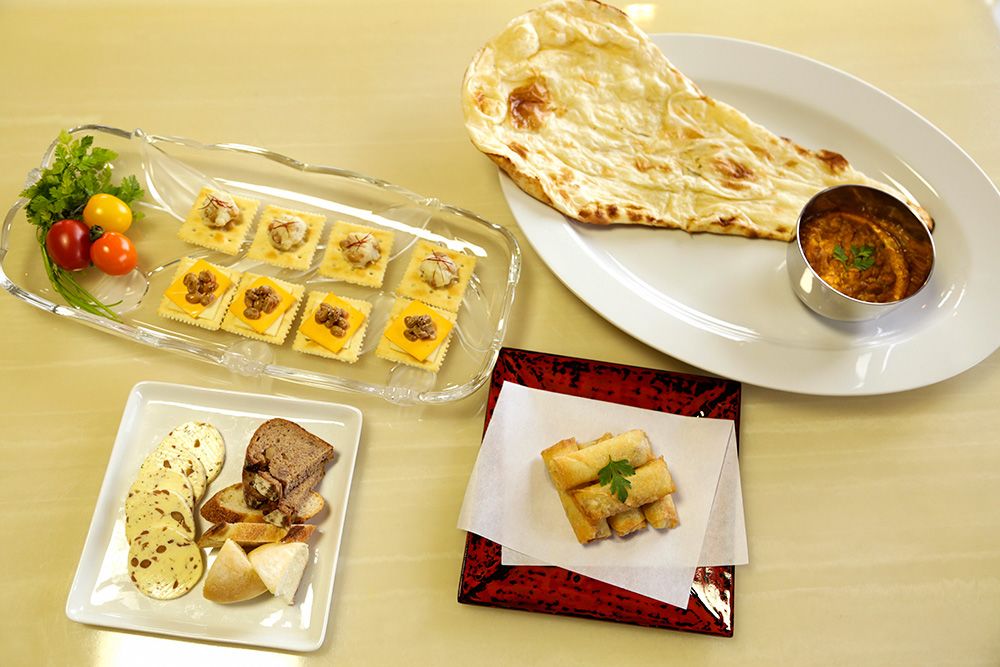 (Originally published in Japanese on May 12, 2017. Text by Nagasawa Takaaki. Photographs by Nagasaka Yoshiki.)