It was during 2012 that the bande dessinée, a European take on the long-form comic book, took significant steps toward popularity in Japan. This made it the perfect time to host the first International Manga Fest in Tokyo. Following the first keynote event, in which Ōtomo Katsuhiro spoke live with a group of young French artists, Urasawa Naoki took the stage for the second panel discussion. He was joined by the famous team of Benoît Peeters and François Schuiten, the scriptwriter and artist for the collection Les Cités Obscures (published in English as Cities of the Fantastic), which won the grand prize in the Manga Division of the Agency for Cultural Affairs’ Japan Media Art Festival. The conversation was wide-ranging, covering topics from story and technique to the differences between BDs and Japanese manga. 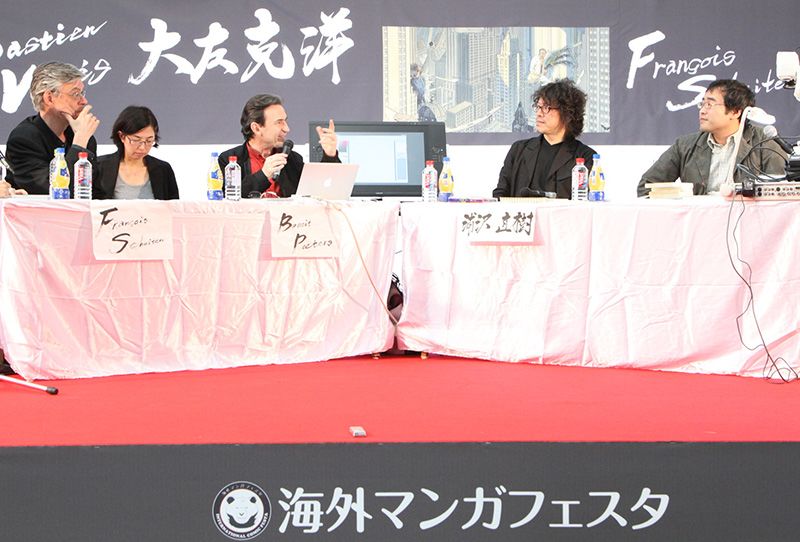 From left: Schuiten and Peeters, with their interpreter seated between them; Urasawa; and BD translator Hara Masato, who chaired the panel.

The Entrancing World of Peeters and Schuiten 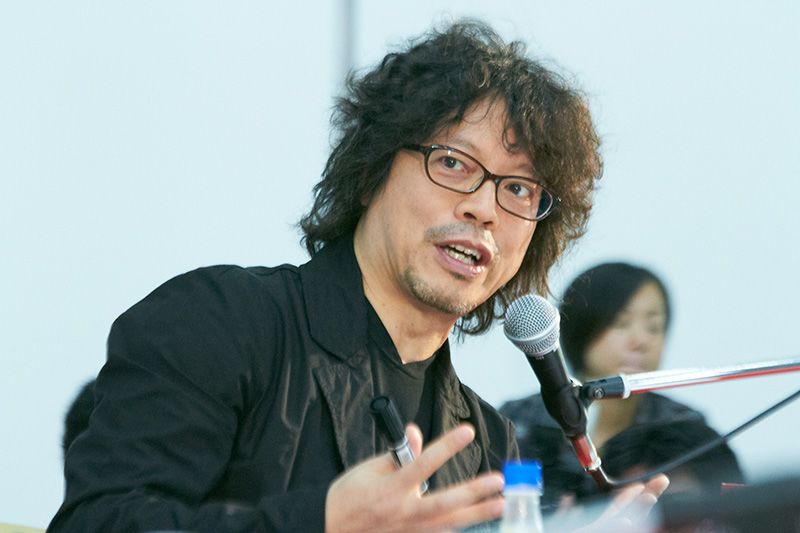 Urasawa Naoki. Born in 1960. Since his 1983 debut he has produced hits including Yawara! (a popular judo-themed manga), Master Keaton (scripted by Katsushika Hokusei and Nagasaki Takashi), Monster, 20th Century Boys, and Pluto (scripted by Tezuka Osamu, produced by Nagasaki Takashi, and supervised by Tezuka Makoto). Winner of the Japan Cartoonists Association Award, two Tezuka Osamu Cultural Prizes, and three Excellence Awards from the Agency for Cultural Affairs’ Japan Media Arts Festival. His ongoing series Billy Bat (co-credited to Nagasaki Takashi) in the magazine Morning reached its 100th installment in May 2013.

Peeters began with praise for Urasawa’s work Pluto, which “incorporated various elements of Astro Boy, while creating a unique world.” Schuiten said that Monster, another well-known work by Urasawa, “has an impressively constructed story. Contrary to my expectations, it gave me an impression similar to that of a European BD.”

Urasawa mentioned that Les Cités Obscures had not been recommended to him by anyone; rather, he stumbled upon the work by chance in a bookstore during a visit to Shōnan. He purchased it “after being struck by how the cover illustration was something out of the ordinary”—and evidently something attractive enough to inspire him to lug the heavy, 400-page book back home.

The mutual respect was on plain display among these artists, despite the very different types of work they create. Attendees at the panel discussion were soon aware of a fundamental connection among them. 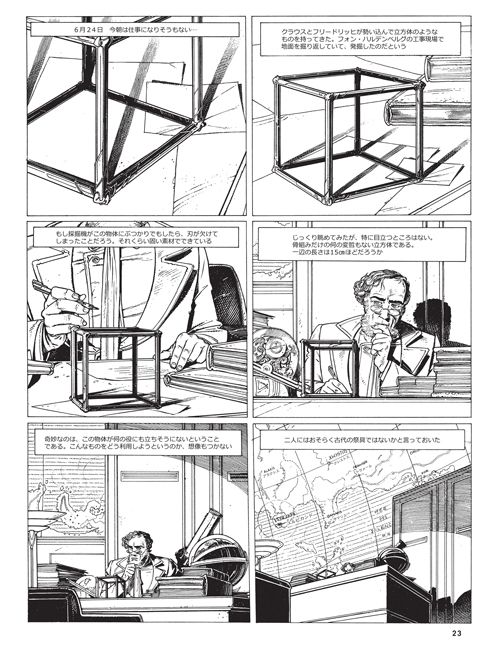 Comparing and Contrasting Manga and BD

One decisive difference between BD and Japanese manga is time, Urasawa noted—namely, the amount of time spent on production. When Schuiten disclosed that one volume takes him two years to complete, Urasawa sighed: “The norm in Japan is having to complete twenty pages a week. I’m jealous of that manner of working!”

Schuiten, however, took the opposite tack in his response: “I feel like I’ve spent my entire life just drawing Les Cités Obscures. Sometimes I wish I could have drawn faster.”

Peeters, who also been active as a manga critic, offered his take on the differences between the two artistic approaches: “Japanese manga series draw readers into their long stories. So the artist draws panels that get them to keep turning the pages. Conversely, in a BD, you draw the scene in such a way that the reader’s gaze remains focused upon a single panel for a long time.” 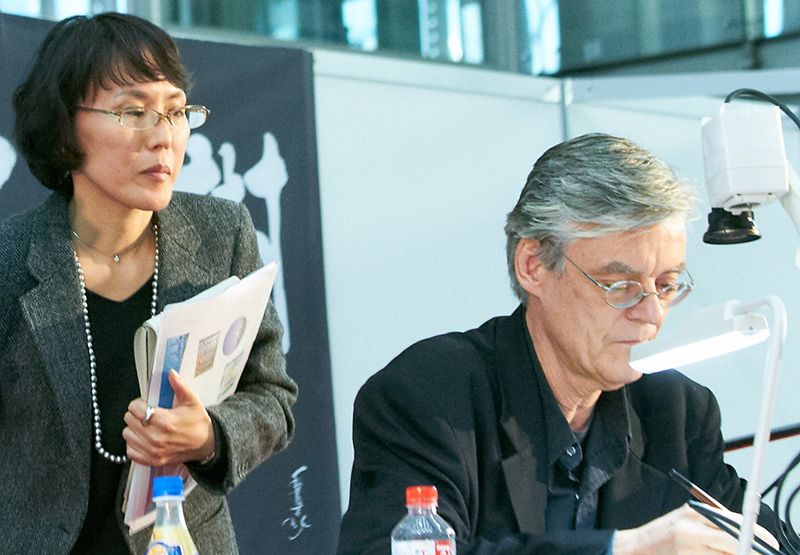 François Schuiten. Born in Brussels, Belgium, in 1956. Debuted at the age of 16 with Mutation. In addition to drawing BDs, he has also applied himself to the design of film backgrounds and public spaces including subway stations and World Expo pavilions. 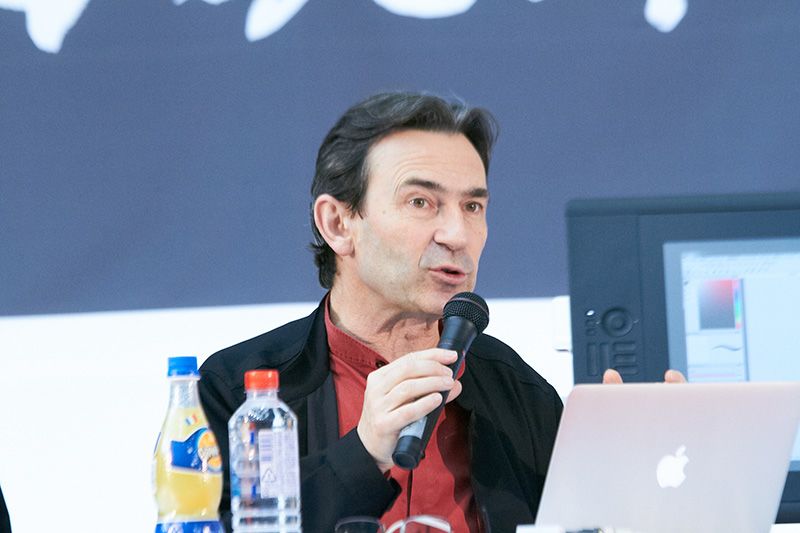 Benoît Peeters. Born in 1956 in Paris; lived in Brussels from childhood, when he became friends with Schuiten. In addition to his collaboration with Schuiten, Peeters has teamed up on BD projects with Frédéric Boilet and Taniguchi Jirō. Has also written widely as a cultural critic, covering contemporary philosophers like Roland Barthes and Jacques Derrida in addition to BDs by Hergé and other artists. Active in diverse fields, including visual art.

The overwhelming majority of Japanese manga is in black and white, but the more visually focused genre of BD also includes works with entire volumes of color art. Schuiten alternates between monochrome and color illustrations in order to accentuate the ebb and flow of his stories. Japanese comic magazines also sometimes begin with a few color pages. Schuiten asked about the significance of these opening color sections.

“They don’t mean anything,” Urasawa replied with a wry smile. “It would be nice to add the impact of color in places where the drama is high. But why put these color pages at the beginning of a work, where nothing is happening? I’ve always said to the publishers, ‘let’s put color in the middle of the volume.’ It was Ōtomo [Katsuhiro] who beat me to the punch in doing this first, though,” he continued, raising a laugh from the crowd.

Urasawa took pen in hand as he asked Schuiten about his shading style (left); Schuiten illustrated his response (right).

During the live discussion, Urasawa suddenly took up his pen and started drawing, asking Schuiten whether he begins drawing from the more or less heavily shaded area of a scene. Schuiten then responded by himself drawing a picture of a human face. The crowd stirred with excitement at this repartee, only possible in manga.

Well-versed in the state of Japanese manga, Peeters pointed out the uniqueness of the tantō henshūsha—or “editor in charge” of a particular artistic project—in Japan’s industry, using the Japanese word tantōsha (person in charge). Urasawa explained: “As a manga artist, you’re generally facing a blank page or drawing yourself into exhaustion. At times like those you won’t understand if you are going in the right direction. A superior editor will tell you.” The tantōsha, he analogized, is “someone who acts like the producer George Martin did for the Beatles.” Schuiten nodded deeply and said, “I envy the artists who are able to dialogue with tantōsha in this way. We probably need to reexamine the relationships that we BD creators have with our publishers and agents.” 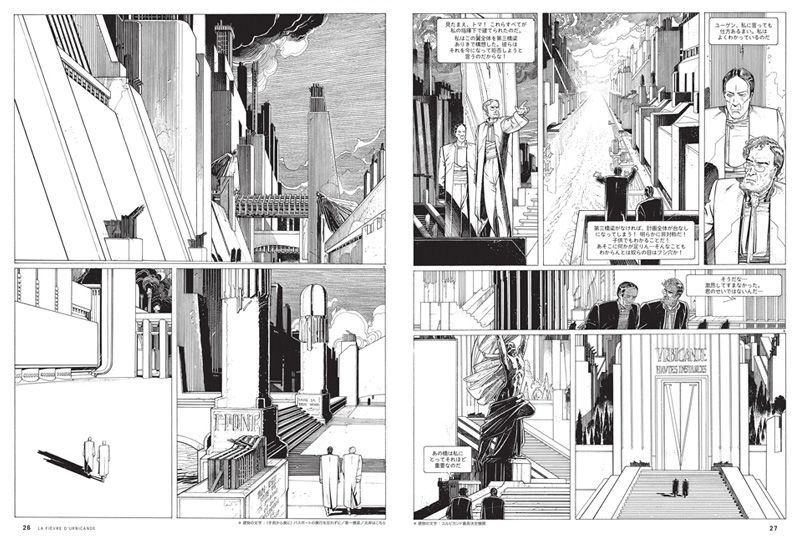 Mœbius, the pen name of the legendary French BD creator Jean Giraud, came up several times in the International Manga Fest panel discussions. Urasawa, for instance, enthused: “When I went to France I bought a mountain of books in the Mœbius corner of the bookstore. Looking at the lines that he drew, I feel fired up, like someone is saying to me, ‘Hey you—draw!’ He is a key driver of my creative energy.”

Peeters also had praise for the French master. “He’s fascinating as a person, not just as an artist. There aren’t many comic creators whose biography you’d want to read—probably Tezuka Osamu for Japan and Mœbius for France. He showed the path for the next generation of artists, telling us, ‘Get out of your everyday life. Living and drawing are adventures.’”

In his own creative career, Tezuka was influenced by the French artist’s technique of drawing shadow with dotted lines, using the term “Mœbius lines” to describe this shading approach. This is just one of the countless episodes that show the connections between Japanese manga and European BDs. The International Manga Fest was a productive event at which artists representing Japan and Europe shared their views on and memories of their art. Hopes are high that the second International Manga Fest, to be held on October 20, 2013, at Tokyo Big Sight will offer similar insights to participating artists and their fans. 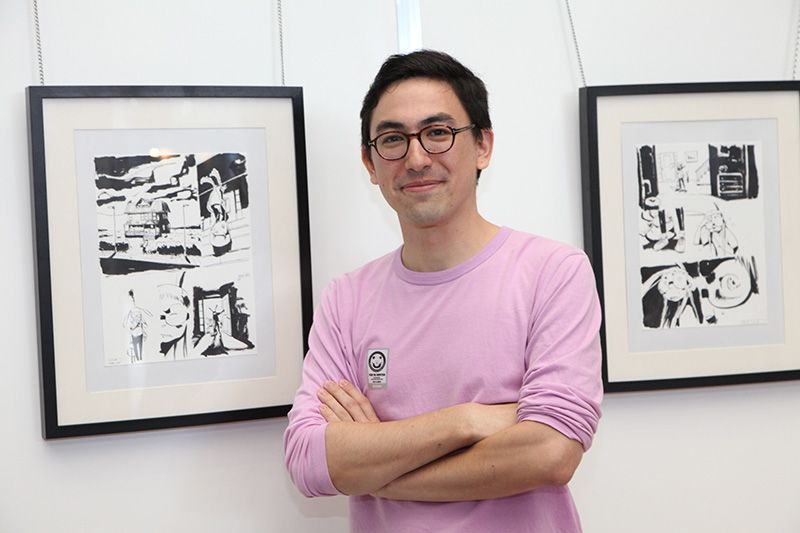 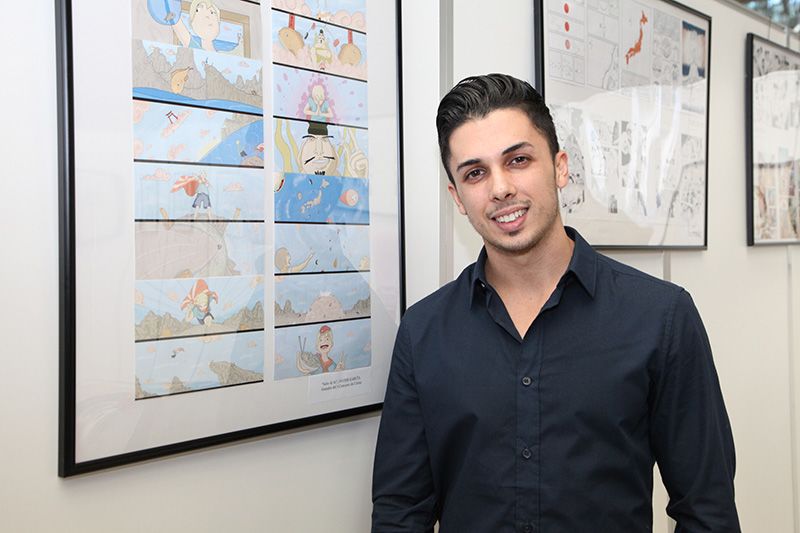 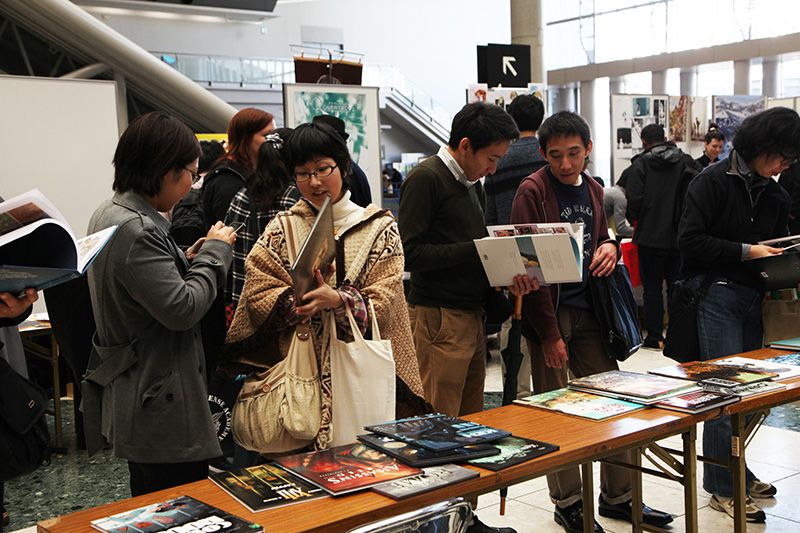 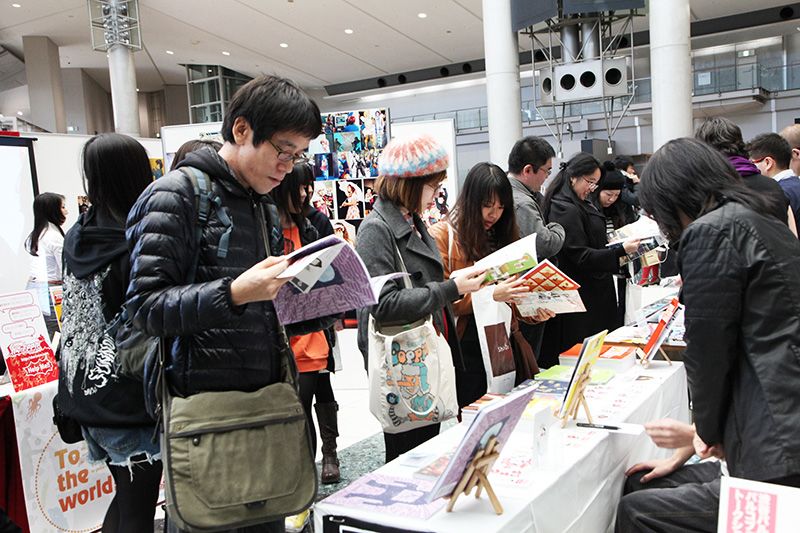 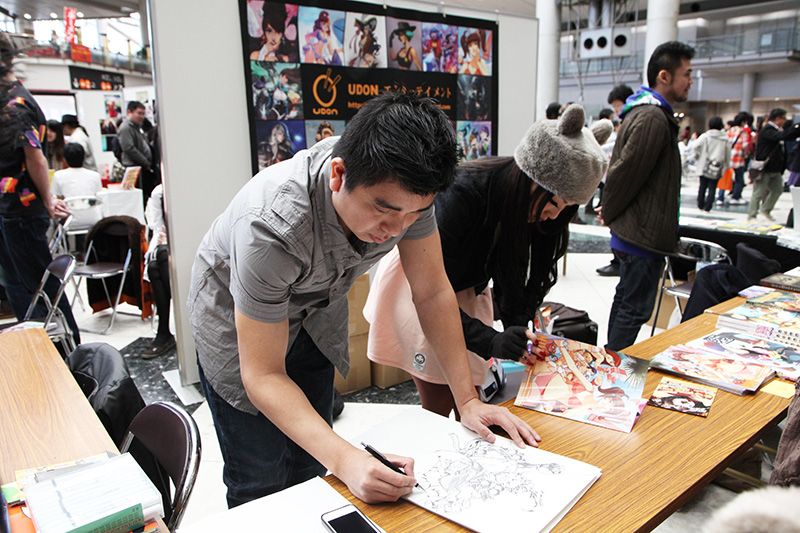 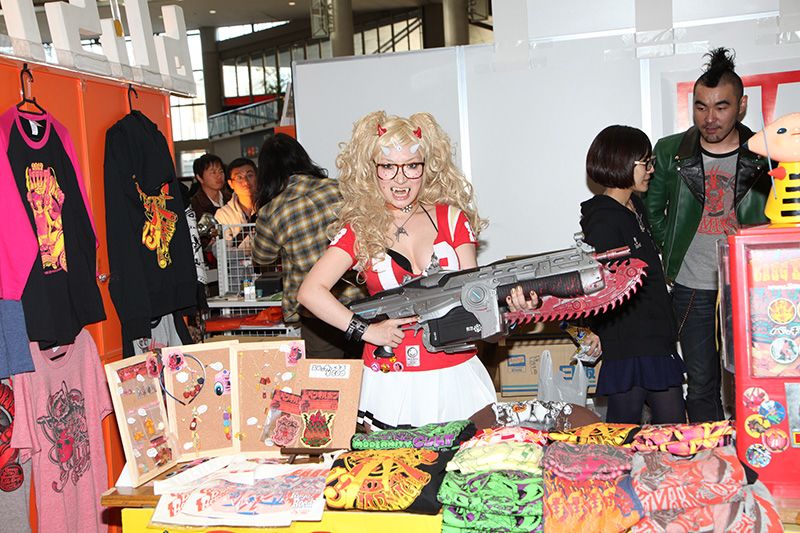 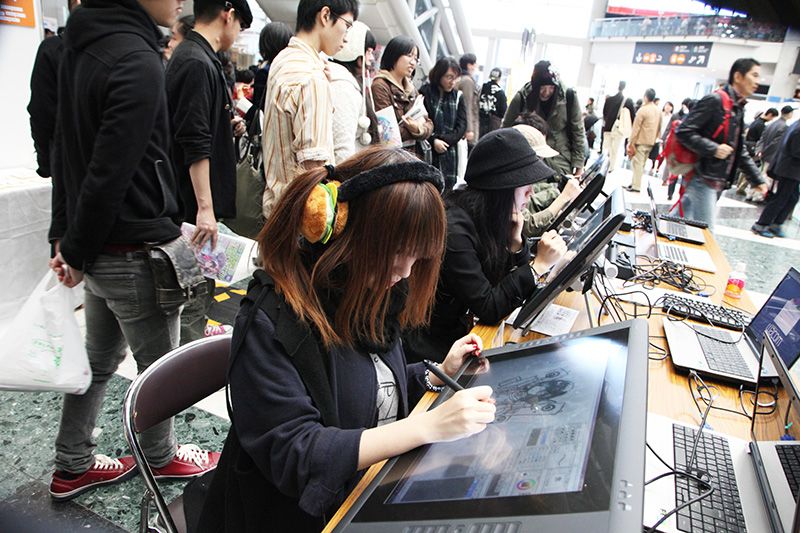 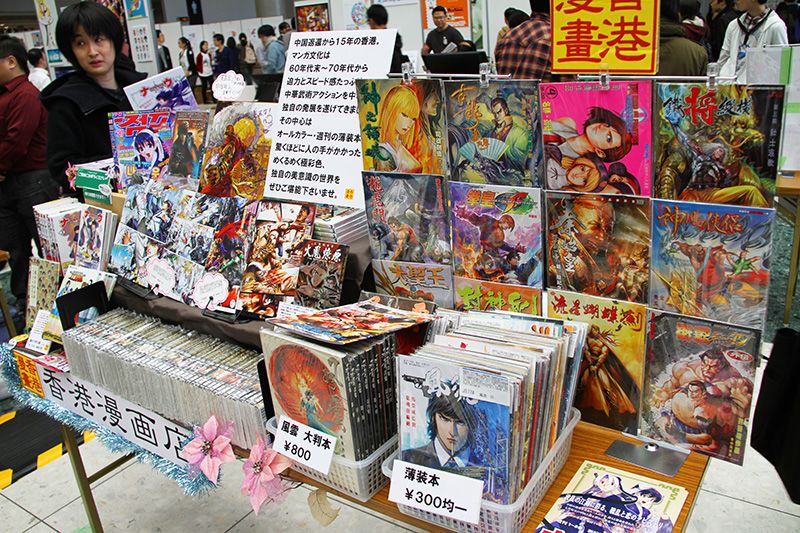