Fireworks by "Hanabishi” Masters Blossom in the Night Sky

Society Culture Lifestyle Jul 7, 2014
Traditional firework makers, or hanabishi, have thrilled spectators since the Edo period (1603–1868). One of the preeminent firework craftsmen today is Aoki Akio, who comes from a long line of outstanding hanabishi. Izumiya Gensaku takes a look at how Aoki is bringing this old craft into the twenty-first century.

Fireworks from Edo to Now

Japanese firework displays in the Edo period (1603–1868) were quite different from the fireworks that now decorate our night skies. Exploding fireworks back then gave off a reddish-orange color. This was because the gunpowder used at the time mainly consisted of sulfur combined with a blackish powder like saltpeter and charcoal, which tended to produce orange flames. Working with these materials, the firework makers, or hanabishi, strived to come up with ways to put their individual stamp on their firework displays, such as by experimenting with different types of charcoal to obtain gradations of color.

It wasn’t until the Meiji era (1868–1912) that western gunpowder became available to firework makers in Japan, allowing them finally to produce the kind of brightly colored fireworks that are so common today. From this point on, the craft of firework in Japan developed by leaps and bounds through the diligent efforts of the hanabishi. In the twentieth century there also emerged a number of famous firework hanabishi, and the lively competition between them helped the craft to develop and laid the basis for the Japanese firework tradition that has continued to the present day. 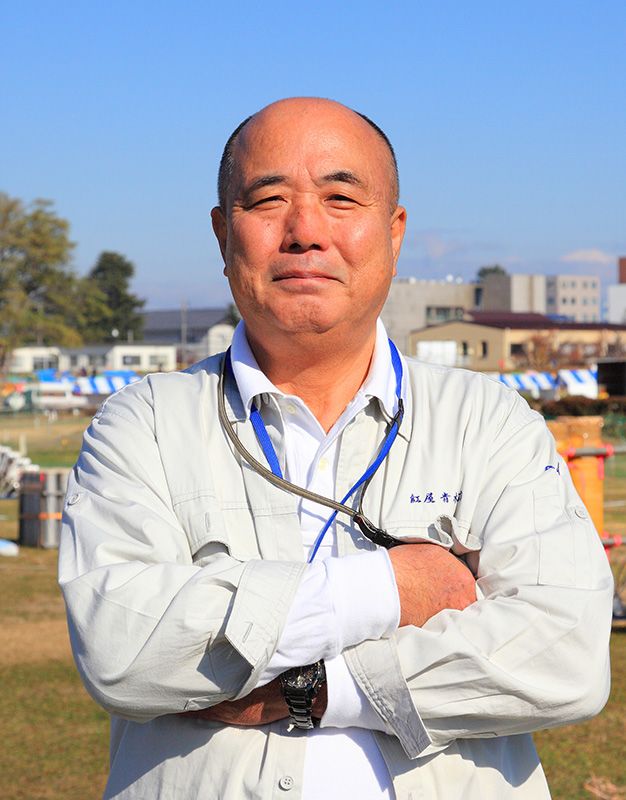 Aoki Akio, the 64-year-old chairman of Beniya-Aoki Fireworks in Nagano Prefecture, is one of the modern successors to the acclaimed hanabishi of the past. His grandfather Gisaku was once known as the “God of Fireworks” and his father Tamon was also a renowned hanabishi.

Aoki began learning the craft when he was still in high school, travelling up and down the country with his father to put on fireworks displays. This experience gave him the chance to see all sorts of fireworks firsthand. Under the close instruction of his father, Aoki dedicated himself to the way of the hanabishi.

In the days since then, Aoki’s name has become a common fixture atop the winners’ list at fireworks contests held across Japan, including the illustrious Prime Minister’s Prize at both the Ōmagari National Fireworks Competition in Daisen, Akita Prefecture and the Tsuchiura All-Japan Fireworks Competition in Ibaraki Prefecture. Aoki is the current chairman of the Japan Fireworks Artists Association, established by a number of outstanding hanabishi in 1959, and has come to be widely recognized as a leading presence in the world of Japanese fireworks. 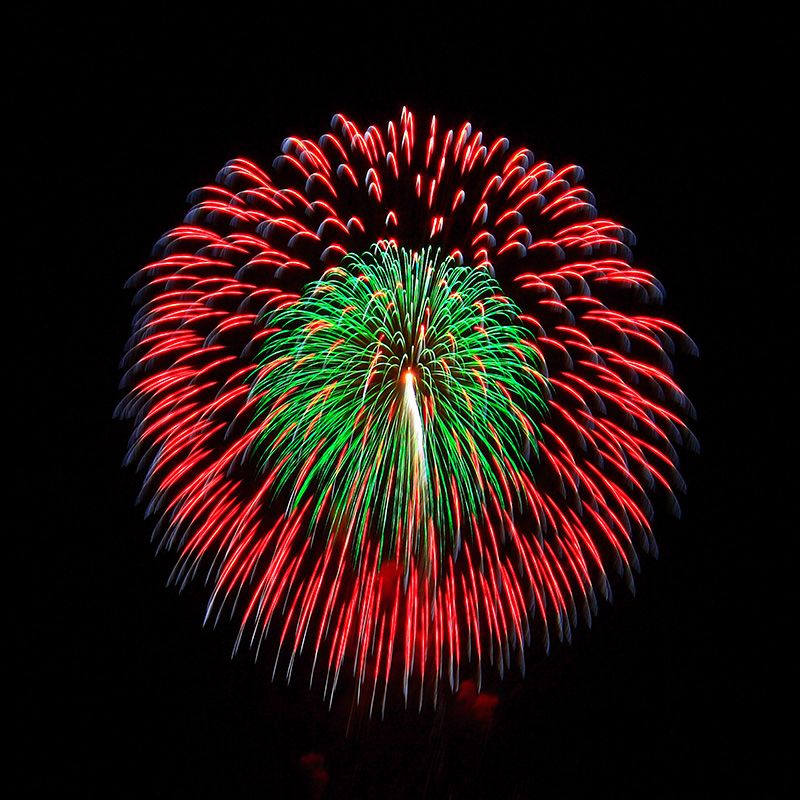 Much like his grandfather before him, Aoki is sometimes referred to as the “God of modern fireworks”—and with good reason. He is the creator of the chrysanthemum-shaped firework, considered by many in Japan to be the most beautiful of all. Upon exploding in the sky, the sparks spread out majestically into the round shape of a flower in bloom, with details right down to the petals. It is a gorgeous spectacle that captivates audiences.

The chrysanthemum firework is a roughly nine-kilogram shell, 30 centimeters in diameter, that is packed full of gunpowder pellets known as “stars.” This shell is fired 330 meters into the air from a launch cylinder. At the peak of its ascent, the firework explodes, scattering the brightly burning “stars” to form a colorful glowing sphere 320 meters in diameter, blossoming like a giant chrysanthemum in the night sky. 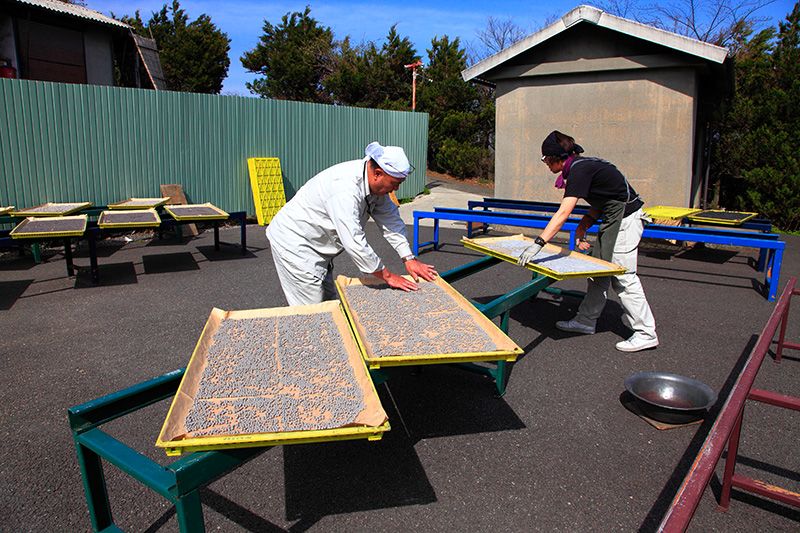 Pellets of gunpowder known as “stars” are laid out to dry. 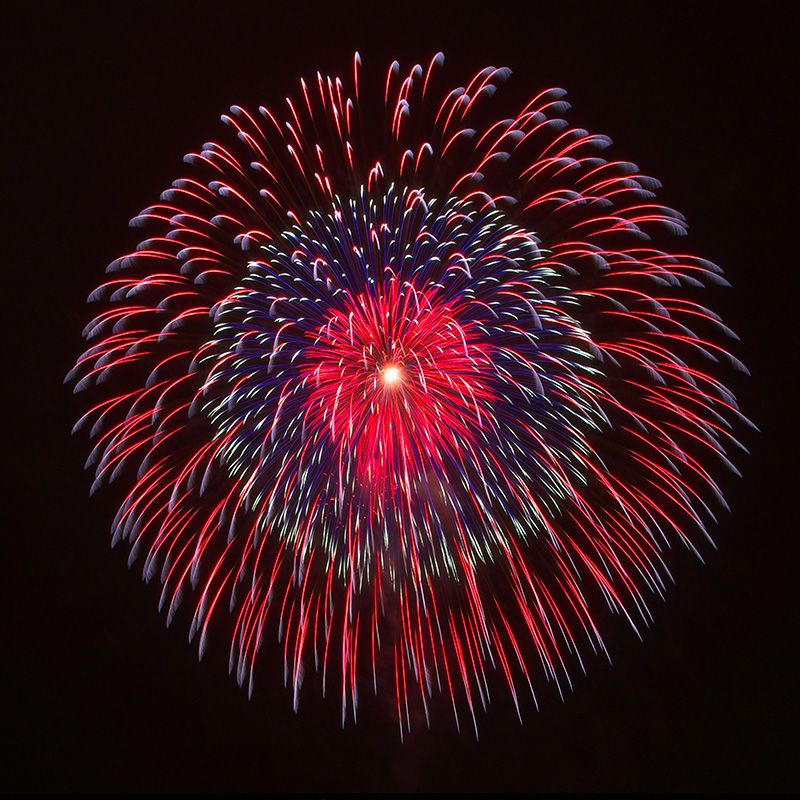 Aoki Akio version of the yaeshingiku (layered chrysanthemum) firework that his grandfather pioneered.

Aoki Gisaku unveiled a type of firework in 1928 that was similar to the chrysanthemum firework his grandson created. It is a firework that pauses for a moment in midair as it approaches its zenith, then bursts into a small flaming sphere, followed by the eruption of a second, larger, sphere and then a third one that is larger still. For a brief moment the three rings hang together in the sky before fading away. Aoki Gisaku named this firework yaeshingiku, or “layered chrysanthemum,” and he was convinced at the time that three layers was the maximum number possible for such a firework.

Later, through his own experimentation, Aoki’s father Tamon succeeded in adding a further sphere to create a four-layered chrysanthemum, before another hanabishi from outside the family trumped this by coming up with a way to explode a firework into five concentric spheres.

Aoki Akio hopes to top that feat, however, and is devoting himself to creating the first six-layered chrysanthemum. But loading a firework with around 3,000 “stars” in precisely the right way to create six perfectly aligned circles is no easy task. 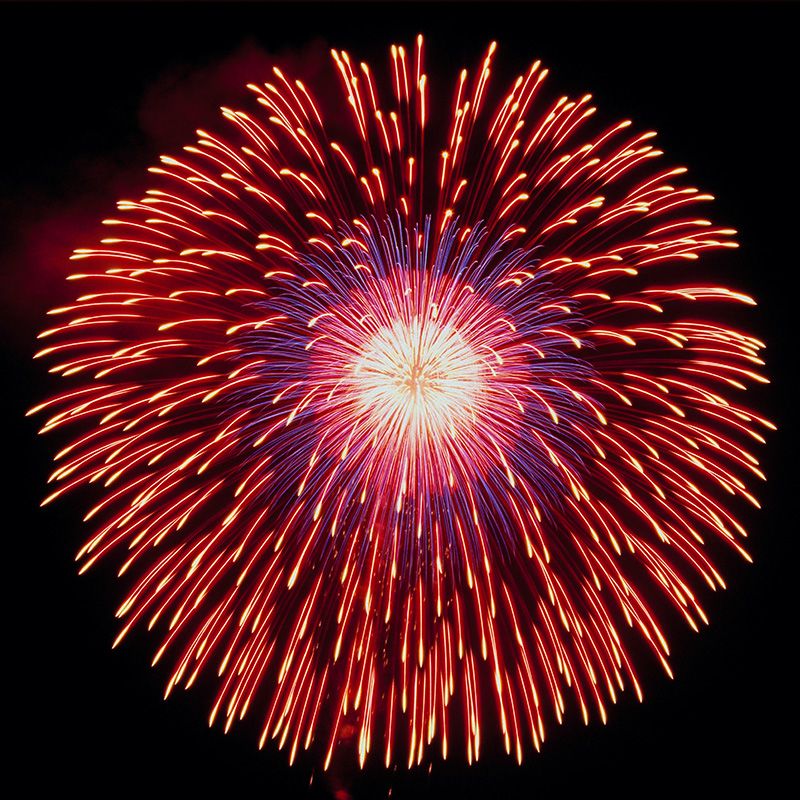 A six-layered chrysanthemum-shaped firework would require an explosion at a height of 330 meters to create an outermost sphere 320 meters in diameter, within which must be contained another five perfectly formed concentric circles. The “stars” that make up the outer layer should burn for around six and a half seconds and go through as many as seven changes of color. Of course, it would be extremely difficult to clearly discern six full rings and seven changes of color in less than seven seconds, so Aoki is truly pushing the boundaries of what is possible—not just for the craftsman but also for the spectator. 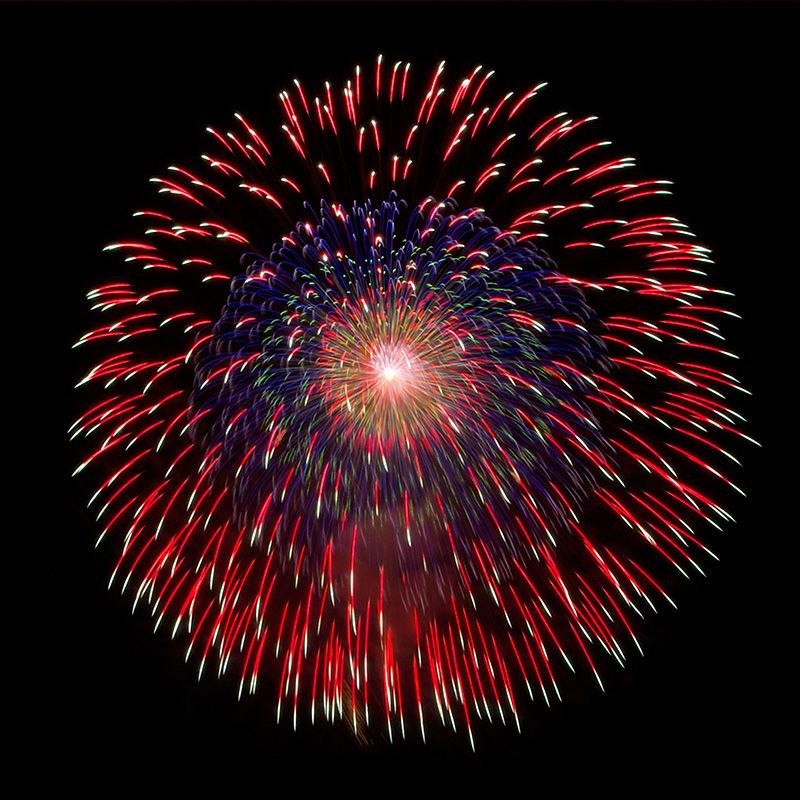 Five-layered chrysanthenum firework made by Aoki Akio, who is now aiming for a six-layered one.

“In each one of these fireworks there are about 3,000 ‘stars’, and if even one of those is not quite right it can ruin the whole shell,” he explains. “If one pellet is even a millimeter out of place when the firework finally opens, that flaw will be multiplied several thousand fold and you end up with something that doesn’t resemble a sphere, no matter what angle you view it from. If you don’t have a sharp eye for detail, you’ll never succeed at a task like this.”

The world of the hanabishi is a complex one in which everything hinges on a fleeting moment of artistry. Through my own decades-long association with these craftsmen, I have come away with an overriding sense of how incredibly focused they are. The concentration and mental toughness that they display in their quest for perfection is almost ascetic, much like the attitudes of those engaged in traditional Japanese crafts such as pottery and lacquerwork. 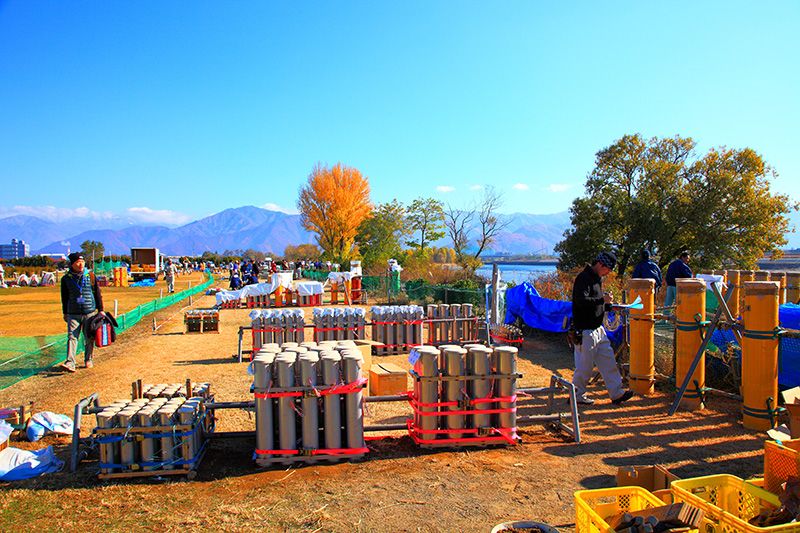 Fireworks ready for launch at the Nagano Ebisukō Fireworks Display in Nagano Prefecture. 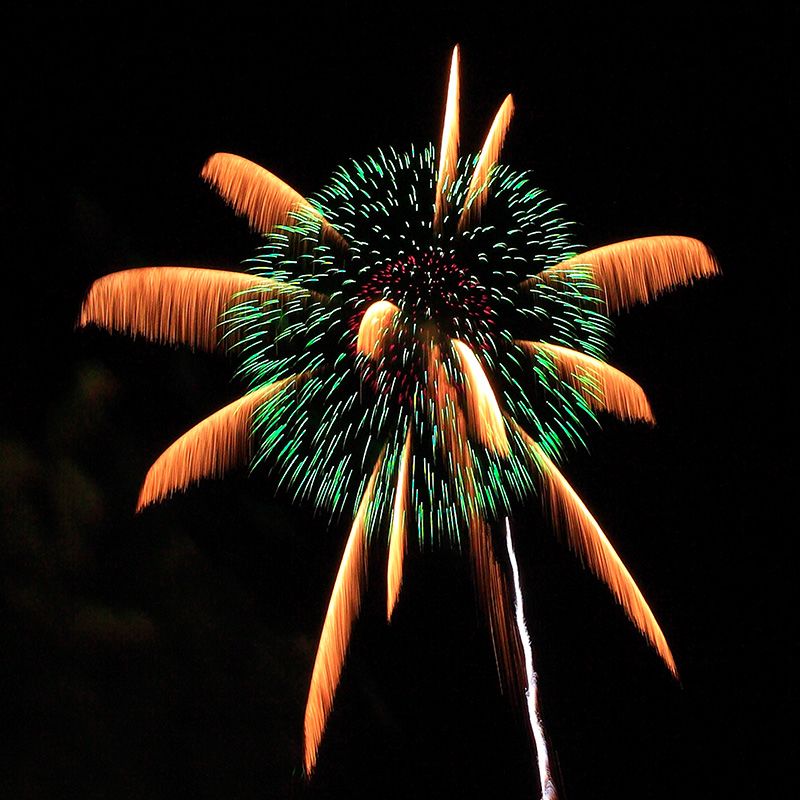 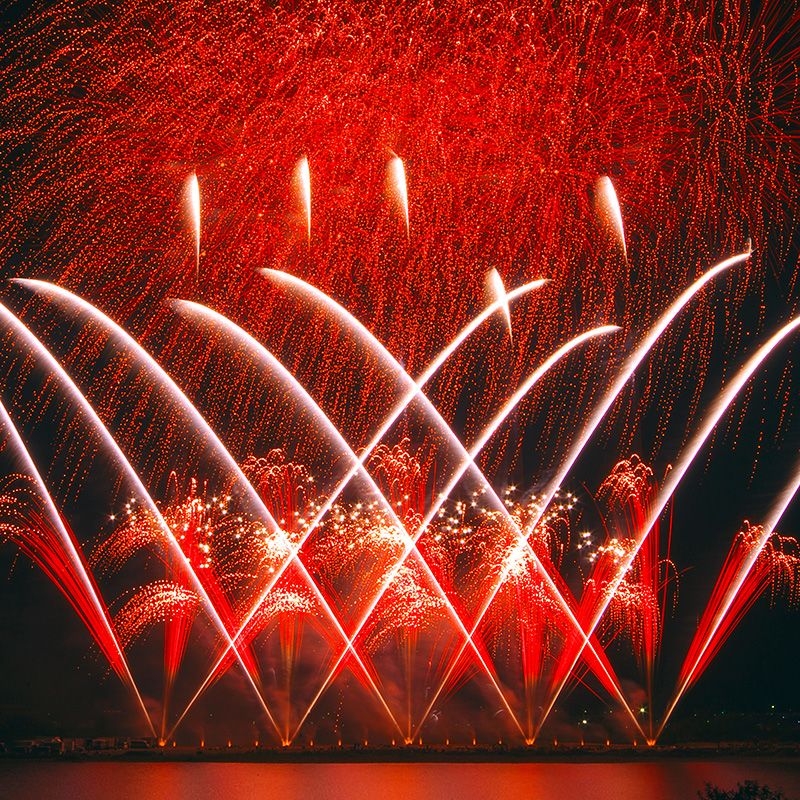 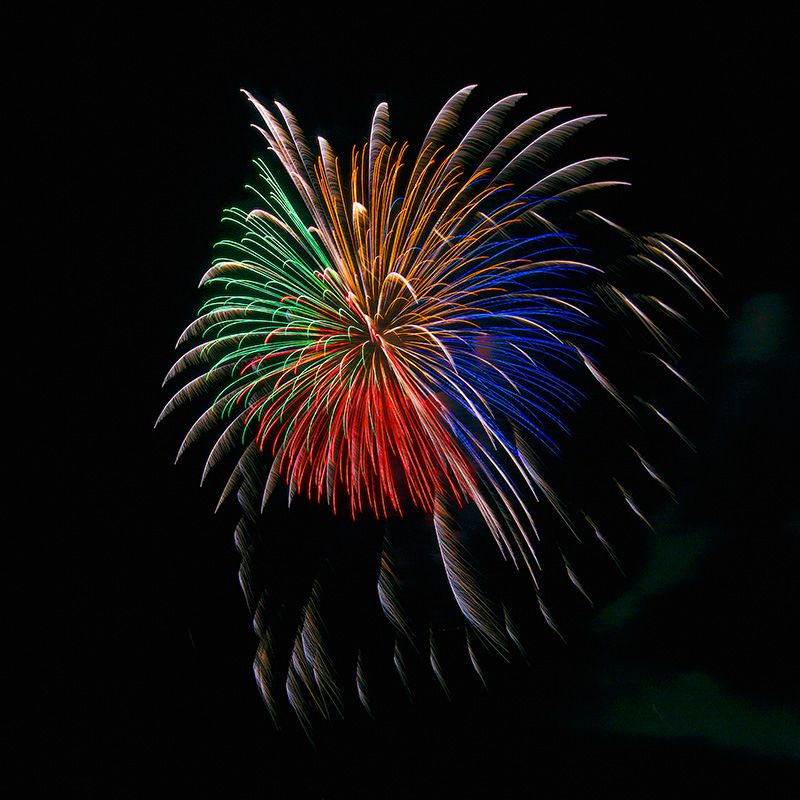 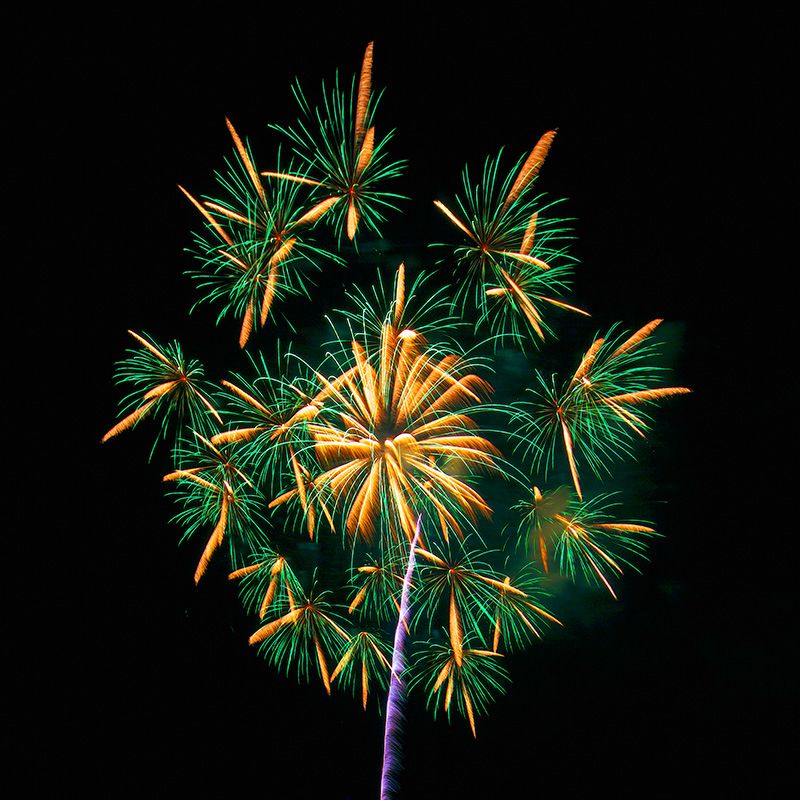 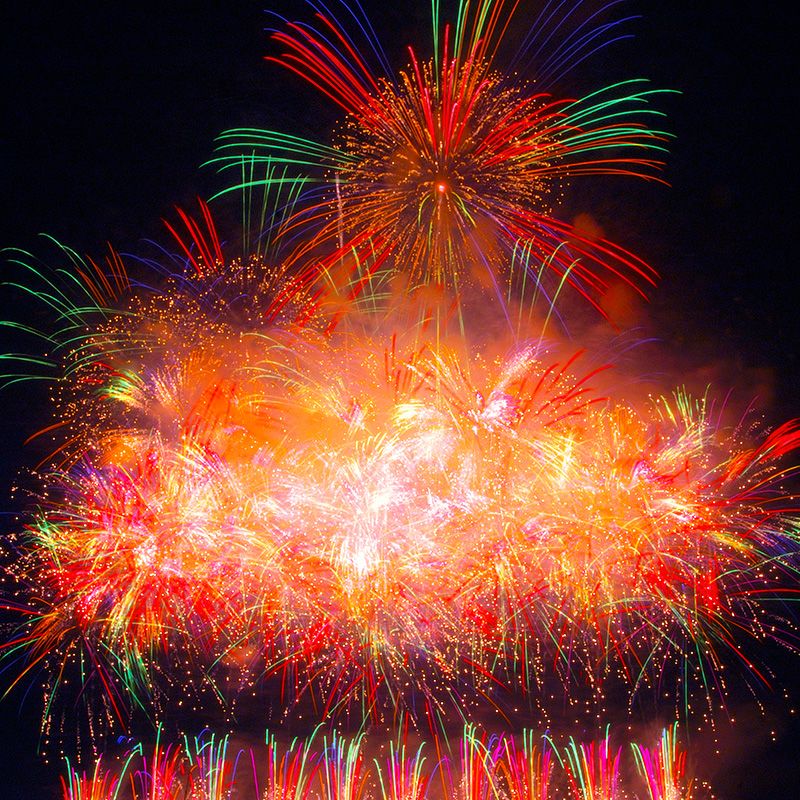 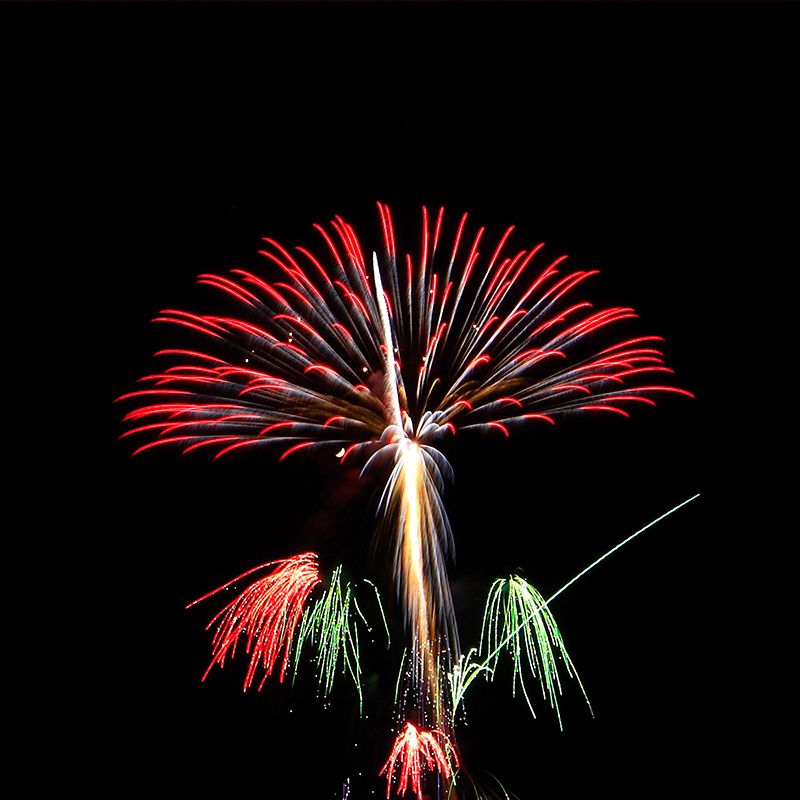 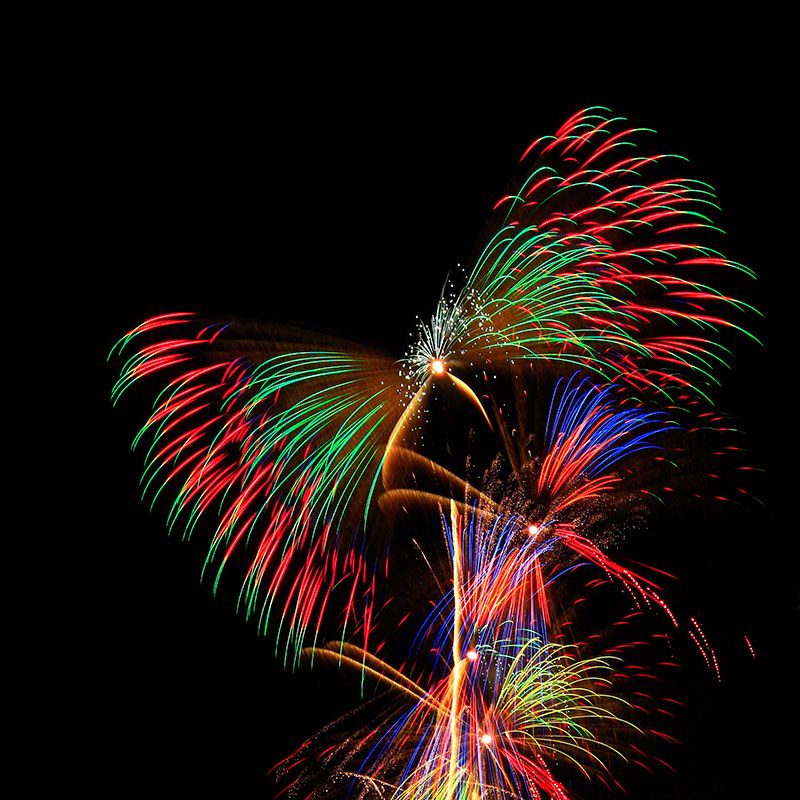 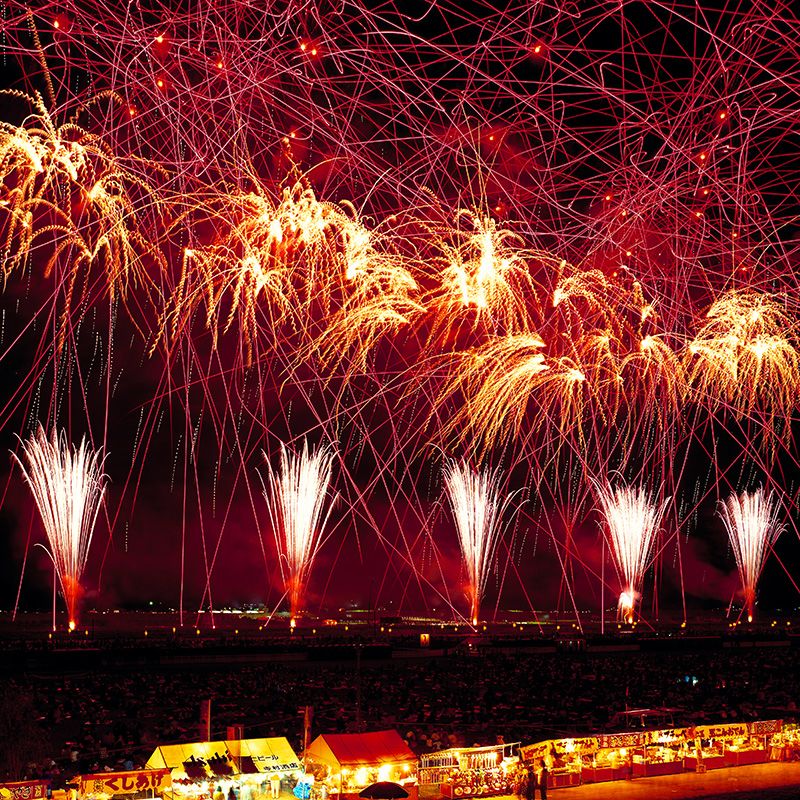