Culture Feb 7, 2018
Elegant illustrations in ink on handmade washi paper characterize the Sesson fans that have been made in the town of Hitachi Ōta for generations. At the helm today is a woman in her nineties, the fourth generation of her family to make the fans, and the last of a long line of craftspeople.

A Breath of Fresh Air

When the hot, muggy weather arrives, it’s time for the little helpers of summer to work their cooling magic: light clothes of cotton and hemp, straw hats, wind chimes, and hand-held fans. Sit outside in the cool of the evening, your summer blinds hung at the windows, and you’re ready for a traditional Japanese summer.

As a child, I used to carry an uchiwa fan in the sash of my yukata whenever I went to the Obon dances or firework displays that traditionally mark the height of summer. The fan not only provided a cool breeze; it was also essential for fending off seasonal insects. Do these traditions survive among young people today? I sometimes wonder.

This summer, I treated myself to a new Sesson uchiwa fan. This traditional type of fan consists of a bamboo handle and frame wrapped in a wide paddle-shaped shell of washi paper painted in ink with traditional designs associated with summer: eggplants, cucumbers, horses, scarecrows . . . The fan is light and remarkably effective at creating a cooling breeze. Many of the pictures are copies of paintings by Sesson, a sixteenth-century monk and artist who lived in Hitachi Ōta. The fans are individually made by hand in the same town in Ibaraki Prefecture to this day. 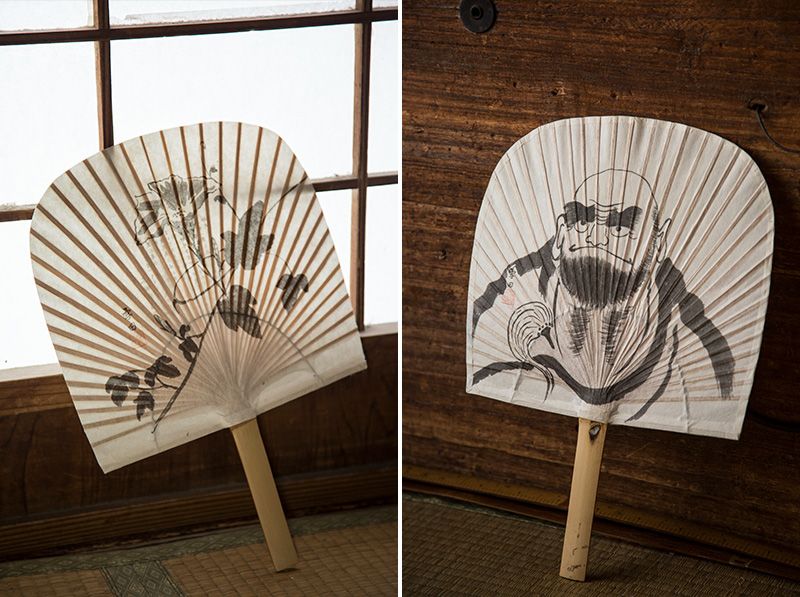 Sesson fans. Copies of paintings by the monk artist Sesson and images made by previous generations of craftsmen are printed onto the paper fans.

At first glance, the old wooden house I have come to visit seems to be half-buried under the flourishing vegetation of the overgrown garden. Outside the house, drying in the sun, are rows of bamboo frames that will later be turned into fans.

“We give them a good drying out in the sun,” says Akutsu Fusako. “That helps prevent mold. And the finished fans weigh almost nothing!” Akutsu has spent her life in the family business, making Sesson uchiwa fans. Now 95, she is the last of a long line of traditional craftspeople. 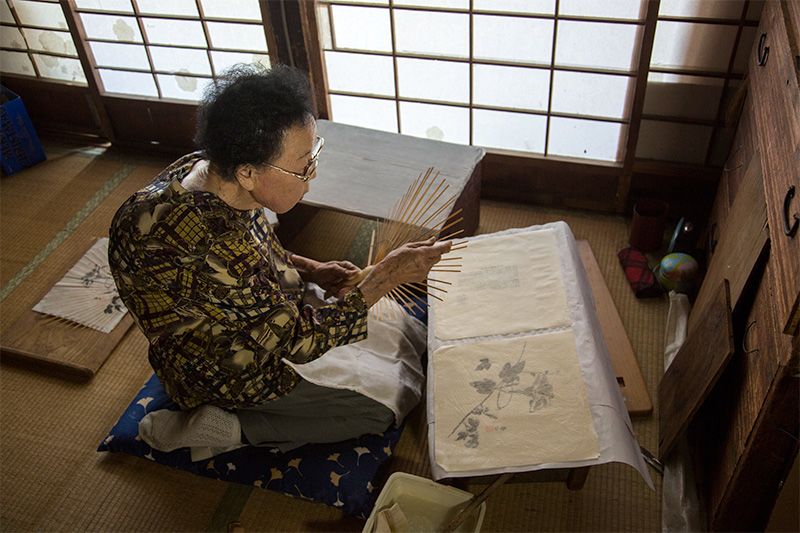 Akutsu Fusako has more than 80 years’ experience making these fans. She takes care of every stage of the process herself, by hand. Here she applies a painting of morning glories to a bamboo frame.

The fans are made from bamboo cut from a nearby grove. The freshly harvested bamboo is then chopped and shaped into the fan-shaped skeleton frame. The frames are left to dry in the sun for eight months, before the washi paper is added.

“I used to go into the mountains with my son to cut the bamboo until I was 90. Partly to teach him the right kind of bamboos to cut.” By now, Akutsu apparently trusts her son to recognize the fine-quality fresh bamboo she needs for her work. Everything else she does herself by hand—from cutting the bamboo and attaching the washi paper, to the final finishing touches. 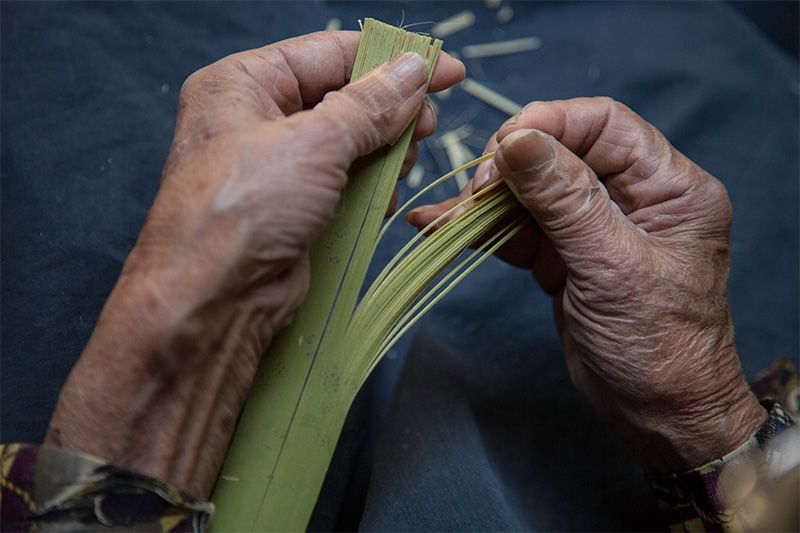 Making the bamboo frame. First, Akutsu cuts a 37-centimeter piece of bamboo into nine chunks with a hatchet. After shearing off some of the thickness, she cuts 40 thin notches into the bamboo, then stretches these out into a fan shape with her hands.

“It was my great-grandfather who started making fans; I’m the fourth generation. This house and all the implements I use for my work date from the Meiji era (1868–1912).” The house was built in 1880 and, having survived two major earthquakes, is now a little crooked. The atmosphere is redolent of years gone by, whisking you away to an older world. It feels strangely like coming home. There is no air-conditioning, but breezes run through the house, keeping it cool even in summer. The wooden tools used to make the fans are buffed to a sheen with long years of use. 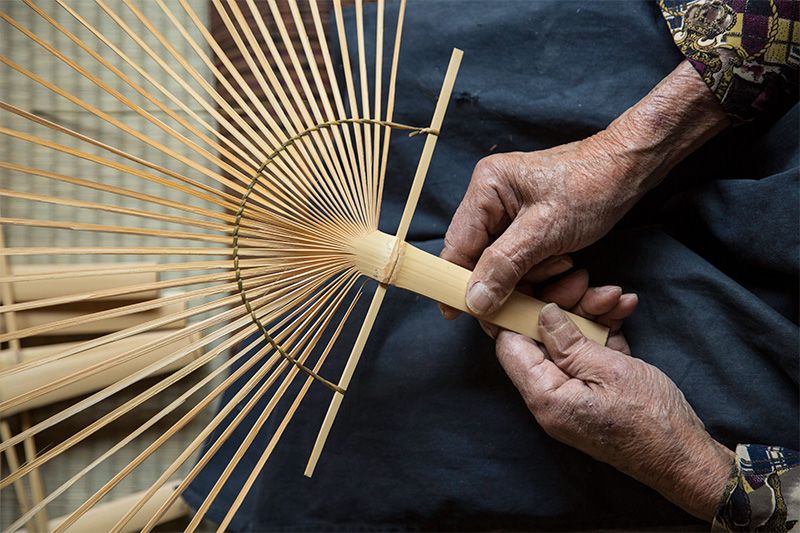 Once she has bound the frame with dampened igusa reeds, the skeleton of the fan is finished. After being left to dry in the sun for eight months, the framework is light and strong.

At around nine in the morning, Akutsu puts the bamboo frames out in the garden to dry. They are brought in again around four in the afternoon. She repeats this process every day, except when it rains, from December until the following August. Over the course of the year, around 1,000 frames are put out to dry naturally in this way.

“It’s pretty tough work. But it’s thanks to this exercise every day that I’m still so strong. I work 366 days a year, even when it’s not a leap year!” 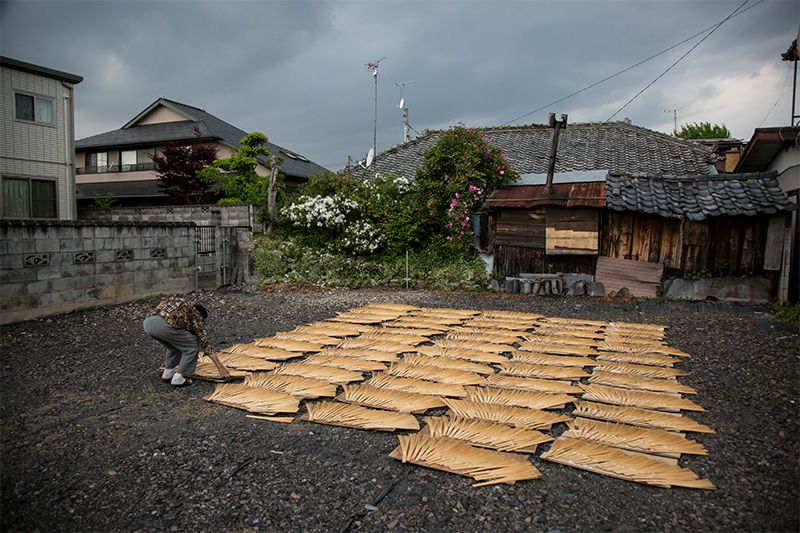 Drying out the frames. The frames are put out to dry in the morning and taken in again in the late afternoon. The biggest risk is a sudden downpour. Neighbors sometimes stop by to alert Akutsu to showers she may not have noticed.

Akutsu happily devotes time and effort to making her fans the traditional way. The two basic parts of the process are making the bamboo frames and attaching the washi paper. Cutting the bamboo takes place in winter. Making the framework too is cold-weather work. The best bamboos for the job are thick and straight ones with wide gaps between their nodes. Akutsu gets started on making the fan frames as soon as the bamboo is cut, before it has time to dry out. (Dry bamboo is harder to cut cleanly.)

The process that requires the most skill is known as ha-ire (inserting the blade) and hone-shibori (holding the whittled bamboo). This involves cutting 40 or so snicks, each less than 1 millimeter wide, into the top of the bamboo cylinder with a sharp double-edged blade. Once the bamboo has been notched in this way, Akutsu takes hold of the bamboo and gives it a good strong pull. As if by magic, it snaps cleanly apart and breaks into thin strips of whittled bamboo. These are then bound one-by-one with igusa reeds (the material used to make tatami). At the end of this process, the strips of evenly spaced bamboo form a perfect fan shape. 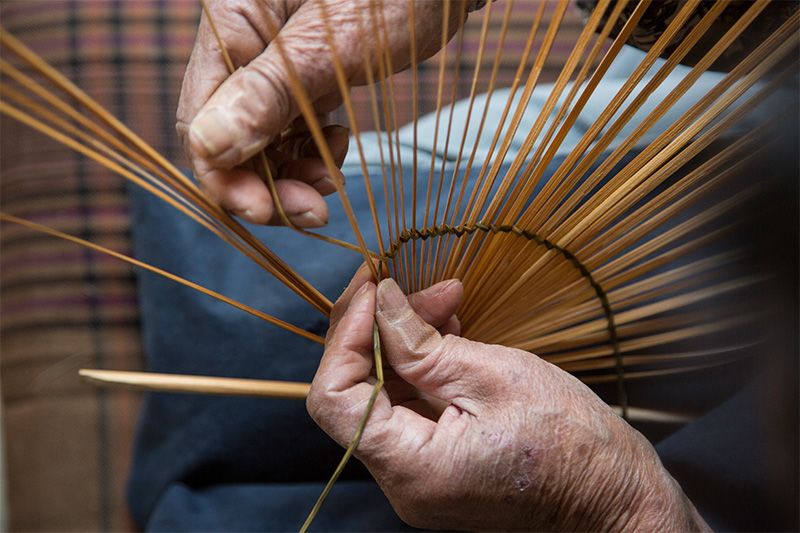 Making the “windows.” Akutsu binds the spokes with igusa reed to form a neat, evenly spaced fan shape. She performs this task 20 to 25 times on an average day.

“You have to be quick or the paste dries out,” Akutsu says, deftly pressing first the back and then the front of the paper covering to the bamboo frame and pressing with her hands to glue the bamboo and washi evenly together. Her practiced hands seem to move swiftly of their own accord, with no wasted movement.

“My husband passed away when he was 60. He had a knack for painting.” Akutsu’s husband left twenty works that are still used for the fans today—as well as Sesson’s fan paintings, these included depictions of local Mito scenery, and ink-wash paintings of morning glories. “We use copies of his pictures printed on washi. Modern technology means we can still use his pictures even today.” 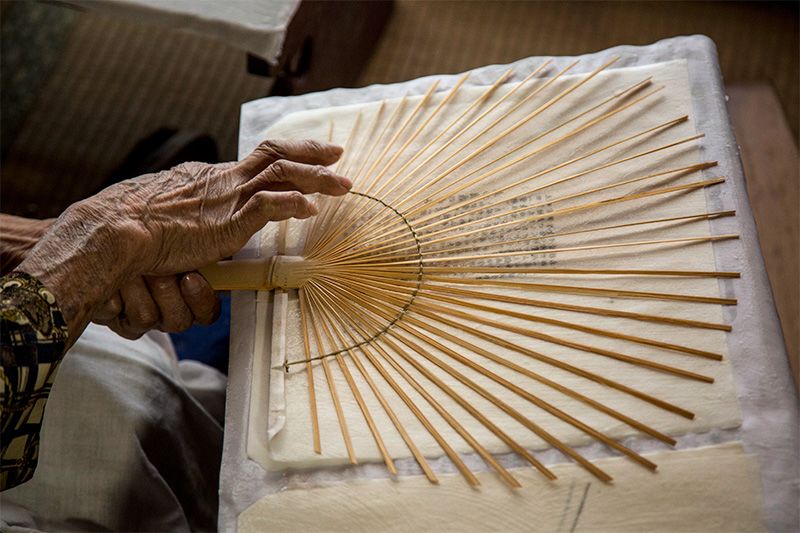 Applying the paper. Akutsu’s skilled hands know just how thick bamboo spokes need to be, and can judge the correct space between spokes and the difference between the front and back of the washi by touch alone.

The fans are made from three main elements: local bamboo, the sturdy frame bound with igusa reed, and robust Nishinouchi washi. The paper, handmade in Hitachi Ōmiya, is made exclusively from the kōzo mulberry tree, making it one of the strongest and longest-lasting of all types of washi. This means that one of Akutsu’s fans will stand up to many summers of hard work.

Customers often write to say that their fans are still as good as ever after ten years; some apparently use the same fan for twenty years.

“Although it’s not really very good for business if they last that long,” Akutsu says with a happy smile.

The Secret to a Long and Happy Life

One of the things that catches the eye as soon as you enter the house is a beautiful piece of Buddhist art depicting the goddess Benzaiten. The painting was done by a customer who gave it to Akutsu as a gift.

“I say a little prayer in front of the picture twice a day. Once in the morning and then again at night, to give thanks for having lived through another day.” It is Akutsu’s painstakingly crafted fans that have brought these connections and blessings into her life. She likes to work outside on the southward-facing veranda overlooking the garden. Nowadays it has become something of a rarity, but until the early decades of the twentieth century, most Japanese houses had a veranda like this, made from wooden slats—a liminal space between the inside and outside worlds.

“It gets the sun in the winter and is quite warm. I work while the sun is up. Once it starts to go dark, that’s it for the day.” She settles under the cozy kotatsu and watches historical dramas on TV, then has a light supper and is in her futon between eight and nine.

“There is always a good breeze inside the house. It’s cold and draughty in the winter, but in summer I don't even bother with an electric fan. When I go to bed, I keep one of my paper fans by my pillow, with the word seifū [清風; cool breeze] written on it.” A simple flick of the wrists is enough to bring an instantaneous gust of cooling air. 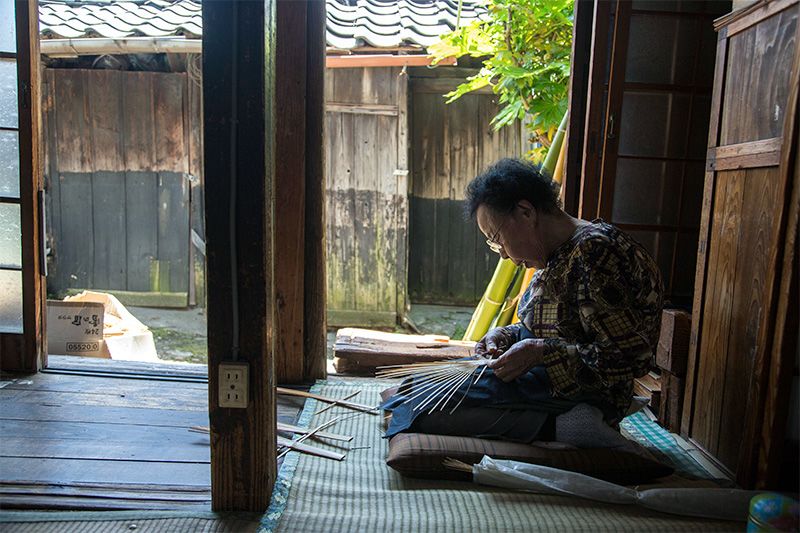 Traditional houses were always built with an engawa or veranda—an ideal place to work: cool in summer, and well-lit in winter.

Now that her parents and husband have passed on and her three children have left home, Akutsu lives alone and is free to do as she pleases. “I work as I like, and live a nice, relaxed life. Everyone is very kind and very good about looking out for me. I’m as happy today as I have ever been,” says Akutsu at 95. The fans she makes with such care and devotion surely help to bring some of that happiness to the people who use them—together with the atmosphere of distant summer days and the refreshing breezes of times gone by.

(Originally published in Japanese on November 28, 2017. Interview and text by Mutsuta Yukie. Photos by Ōhashi Hiroshi. Banner photo: Akutsu attaches a washi covering to one of her traditional fans.)