A Homecoming of the Heart: Shakuhachi Player Bruce Huebner

Culture Dec 6, 2017
California native Bruce Huebner fell in love with the shakuhachi flute as a young man, and in the subsequent decades he has become an accomplished composer, performer, and teacher of the traditional Japanese woodwind instrument. A long-time resident of Japan, he spent many years in Fukushima, where he developed a deep affinity for the prefecture’s people and natural surroundings. Following the Great East Japan Earthquake in 2011, he has used his music to aid in recovery efforts and connect with people affected by the disaster. 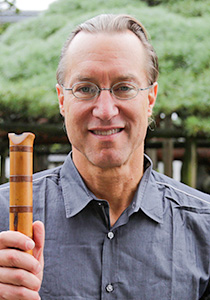 Shakuhachi composer, instructor, and performer. Born in Santa Monica, California, in 1960. Earned a degree in flute and saxophone from California State University, Northridge, and a master’s degree in Asian Studies at the University of California, Santa Barbara. Studied traditional music at Tokyo University of the Arts, graduating at the top of his class. Has released eight albums to date and had his original piece “Amadogawa” (Amado River) featured at an exhibition at the Metropolitan Museum of Art in New York City. Has performed with various artists and groups from traditional and contemporary musical genres. Lives in Yokohama, Kanagawa Prefecture. Performs and teaches in Japan and abroad.

The carefully groomed branches of an ancient pine form a canopy over people making their way to the main hall of Munōji. A crowd of around 150, a mixture of local residents and evacuees of the Great East Japan Earthquake, have gathered inside the stately Buddhist temple in the small town of Kōri in northern Fukushima Prefecture for a performance of traditional music featuring the shakuhachi and koto.

Following the quake, tsunami, and subsequent meltdown at the Fukushima Daiichi Nuclear Power Station in March 2011, Kōri took in members of 220 households fleeing the heavily radiated community of Namie to the southeast. Six years after the disaster, 86 families remain, living in temporary or public housing.

The audience buzzes with anticipation ahead of the show by American-born shakuhachi player Bruce Huebner, a native of California, and his close friend and colleague of 24 years Tachibana Ryōmei. The two masters of the kinko style of traditional bamboo flute are joined by Australian-born koto player Miyama McQueen-Tokita and other performers. 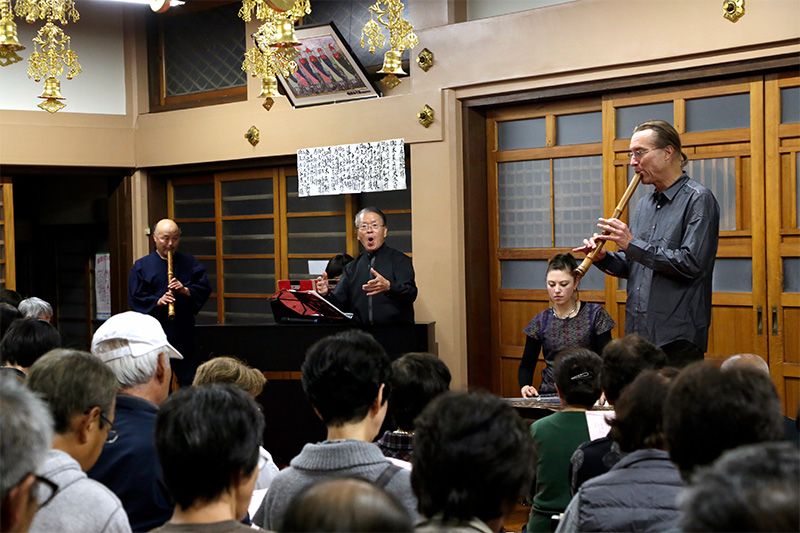 Bruce Huebner (right) plays the shakuhachi during a performance in Kōri, Fukushima Prefecture. The audience includes evacuees from the nearby town of Namie.

A hush falls over the spectators as the musicians take their places. After a few moments, the rich tones of the traditional instruments fill the hall. During renditions of “Nanbu ushioiuta” and “Shinsōma-bushi,” two well-known min’yō folk songs from the area, some in attendance whisper the lyrics or gently clap their hands in rhythm while others wipe away tears. Addressing the audience between songs, Huebner describes how the disaster has helped reaffirm his belief in the power of traditional Japanese music to connect and heal.

Huebner began studying music at age 10, starting with the flute. At 14 years old he also took up the jazz saxophone; he would eventually earn a degree in both instruments from California State University, Northridge. While focused on Western music as an undergraduate, he began to take a keen interest in the shakuhachi after hearing it being played on the radio. “The sound was like a flute,” he recalls, “but everything else was different.”

The shakuhachi is a deceptively simple instrument. Made from a single cut of bamboo, it consists only of a mouthpiece and five fingerholes. However, by varying the strength of breath, the shape and angle of the mouth, and finger pressure a player can travel freely along different scales to create an endless range of tones. Huebner was deeply impressed by the microtonality of the music. “The limitless potential for personal and improvisational expression was obvious from the moment I heard it,” he declares, adding that the minute steps between distinct tones seemed like the subtle brushstrokes of an ink painting. 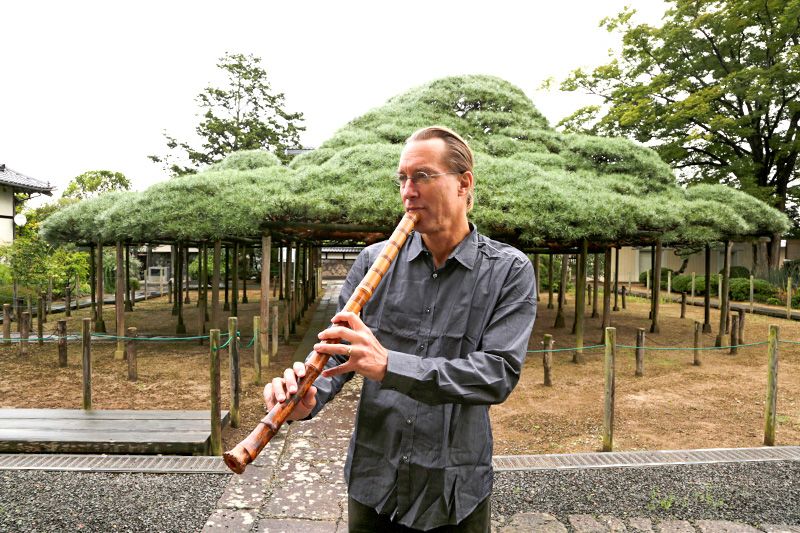 Huebner gives a brief performance in front of a 450-year-old pine on the grounds of the Buddhist temple Munōji.

Switching musical gears from West to East, Huebner earned a master’s degree in Asian Studies from the University of California, Santa Barbara, writing a thesis addressing the role of shakuhachi music in Buddhist practices. In 1989 he came to Japan to study the instrument on a Ministry of Education scholarship. He pursued the shakuhachi at Tokyo University of the Arts under the tutelage of living national treasure Yamaguchi Gorō (1933–99). He became the first foreign-born student to complete the school’s traditional music program, graduating at the top of his class in 1994.

Shortly after, he relocated north to Fukushima, where he taught music for six years at local colleges until returning to Tokyo in 2000 to pursue a career as a professional shakuhachi player.

In the wake of the March 2011 disaster, Huebner says the instrument has been a powerful tool allowing him to channel his feelings. “I’m able to create sounds with the shakuhachi similar to my own voice,” he explains. “By blowing into the instrument, I can express in music my pent-up feelings of anger and helplessness at the heart-wrenching suffering of the Tōhoku region.” 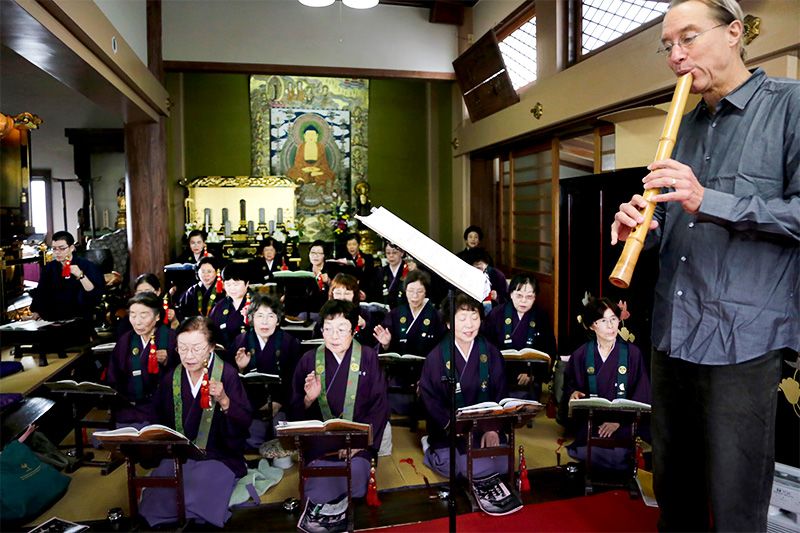 Parishioners of Munōji sing Buddhist hymns as Huebner accompanies the chorus on the shakuhachi.

Giving Back to His Second Home

During his time in Fukushima Huebner developed a deep affection for the people and abundant nature of the region, coming to consider the prefecture as his second home. Although he now resides in Yokohama, twice a week he travels north to teach music and other courses at Fukushima College. Since 2005, he has also teamed up with performers like the American koto player Curtis Patterson on concert tours in Fukushima and other prefectures in the Tōhoku region. 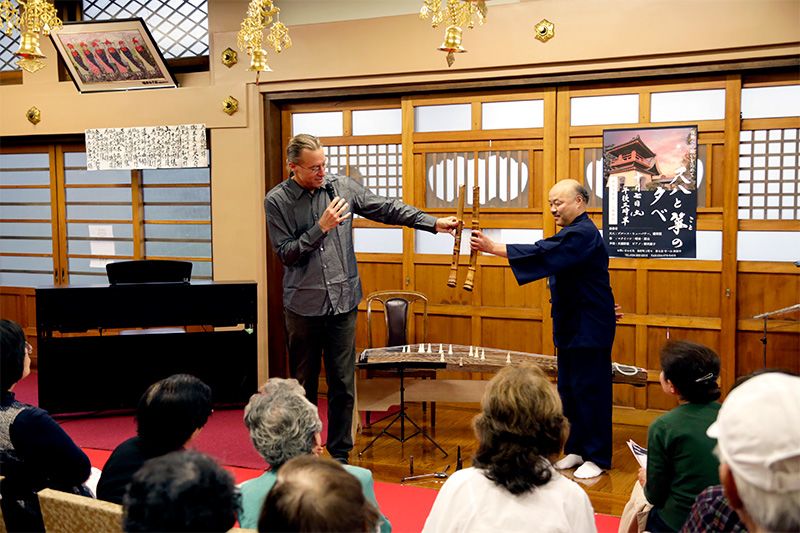 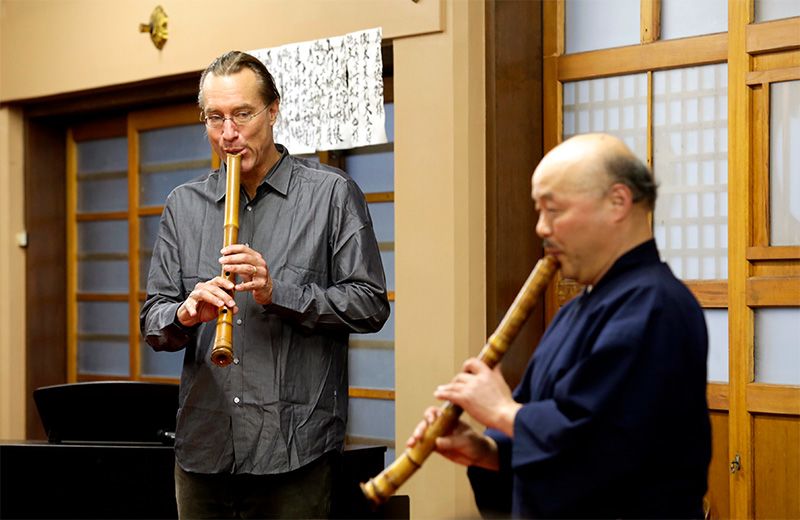 Huebner is also an accomplished composer of shakuhachi pieces. When writing, he says, he likes to camp on secluded Onuma Lake of Fukushima and let the sounds of nature be his muse.

Like many, Huebner watched in horror as the events of March 2011 unfolded. Almost as a reflex he picked up his shakuhachi and set out to help ease the suffering of those affected by the disaster. When he heard that high radiation levels had forced residents of the small town of Futaba to evacuate to a sports arena north of Tokyo, he rushed to the site, playing his flute amid the confusion of evacuees, volunteers, and journalists. Over the last six years, Huebner has made over 100 similar trips to perform for people living in disaster-stricken areas. 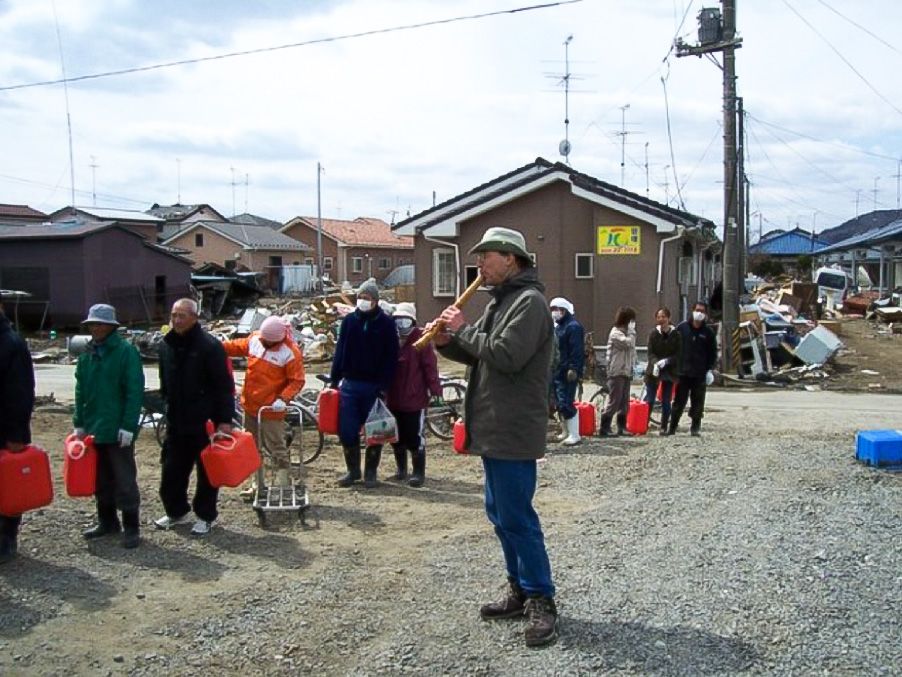 Huebner performs min’yo folk songs for residents living on the front lines of the disaster. He has made over 100 such trips since March 2011. (© Bruce Huebner)

Huebner admits he harbored early doubts. “I worried how people living amid such widespread destruction and turmoil would react to my playing,” he explains. “The last thing I wanted to do was demean their suffering.” To his relief, response was overwhelmingly positive, and his performances were frequently met with warm applause, something he attributes to the familiarity of the shakuhachi.

The performances have had an equally dramatic impact on Huebner. Looking back on his 35 years in Japan, he says he has often questioned his decision to come to the country. “The world of traditional Japanese music is very insular,” he explains, “and as an outsider it’s been a struggle at times to gain acceptance.” But in playing for disaster victims, Huebner has found affirmation of his decision. “I no longer worry about the little differences, but just remain grateful for the good friendships and many other blessings I’ve gained through the shakuhachi.”

The idea for the Munōji concerts, now in their fourth year, started with several evacuees of Namie living in temporary housing in Kōri. The group, attendees of a sutra-copying class at the temple, had seen Huebner perform at evacuation centers and became interested in hosting an event in their adopted community.

“The concerts are as much about music as creating a sense of community,” says Huebner. Even as Japanese continue to lose interest in past traditions, the shakuhachi’s distinct sound retains the ability to rouse a sense of nostalgia among listeners.

This, in Huebner’s view, stems from the deep connection with nature that characterizes traditional Japanese music. In 2007 he partnered with Patterson on the album Going Home, mixing personal themes with nostalgia for their hometowns to create what has been described as a tone poem. “We wanted to return to the origins of traditional music by weaving together the natural elements of mountain, stream, forest, wind, and sky,” states Huebner. These feelings of returning to one’s roots have resonated even stronger following the devastating Tōhoku earthquake.

In the main hall of Munōji, the audience listens intently as Huebner plays a haunting rendition of a local folk ballad. Pulsating with natural energy, the song transports musician and listeners alike back to the scattered towns and neighborhoods of their memories; the places they call home. 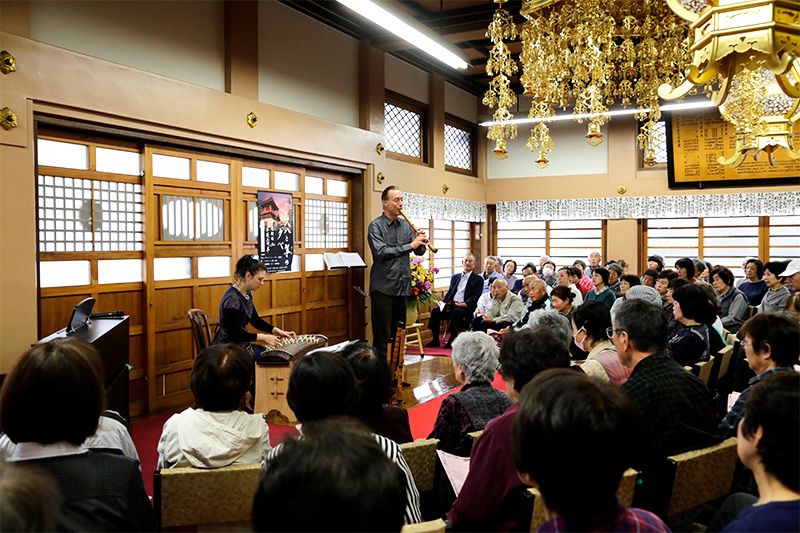