Culture Jan 1, 2018
To celebrate the year of the dog in 2018, this article presents one of Japan’s most famous breeds, the Akita-inu. We talk to Nakagawa Jitarō, a specialist breeder with over 50 years of experience.

Many Akita-inu owners could not imagine keeping another kind of dog. Nakagawa Jitarō, a specialist breeder from Osaka, is one of these people. He has been raising the distinctive Japanese breed for 55 years. 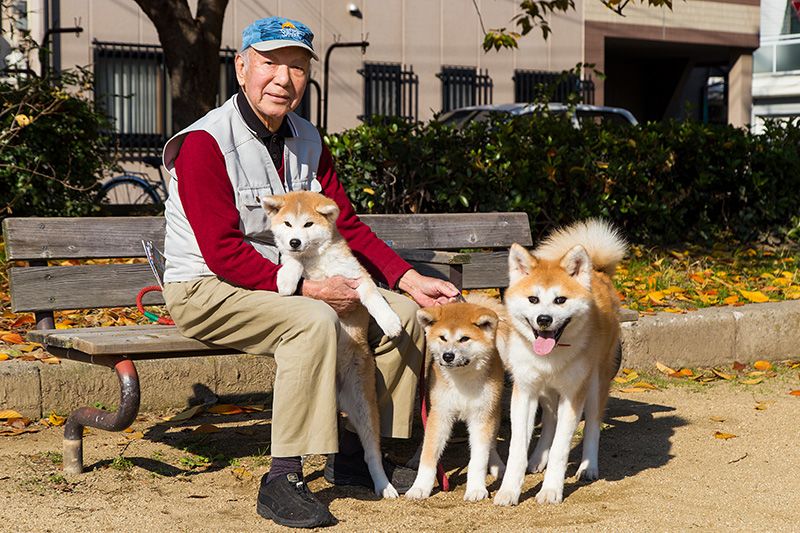 Nakagawa takes his dogs for a walk every morning, so he remains healthy in his eighties.

When I enter Nakagawa’s place of business, I am greeted by Akita-inu with ears pointing upward and curling tails. They range from 3-month-old puppies to 10-month-old dogs that are already larger than medium-sized adults of other breeds.

In Japan, Akita-inu are classed as large dogs. They are the only dogs of this size to be selected as national natural monuments. Four medium-sized breeds—the Hokkaidō-inu, Kai-ken, Kishū-inu, and Shikoku-inu—and the small Shiba-inu have also received this designation. However, Akita-inu are often considered to be of medium size in other countries. 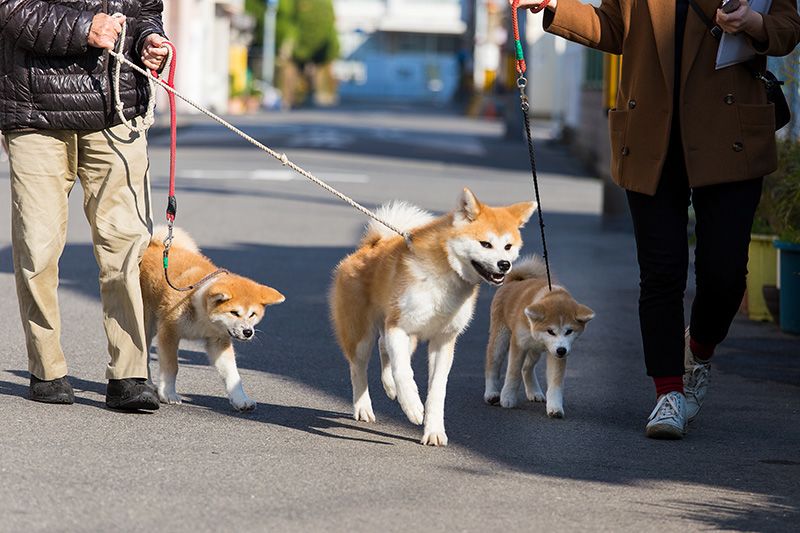 In the center is Kōgyoku-megō, a female born in January 2017. (The –megō is a suffix sometimes added to names of female dogs; an equivalent often attached to male names is –gō.) 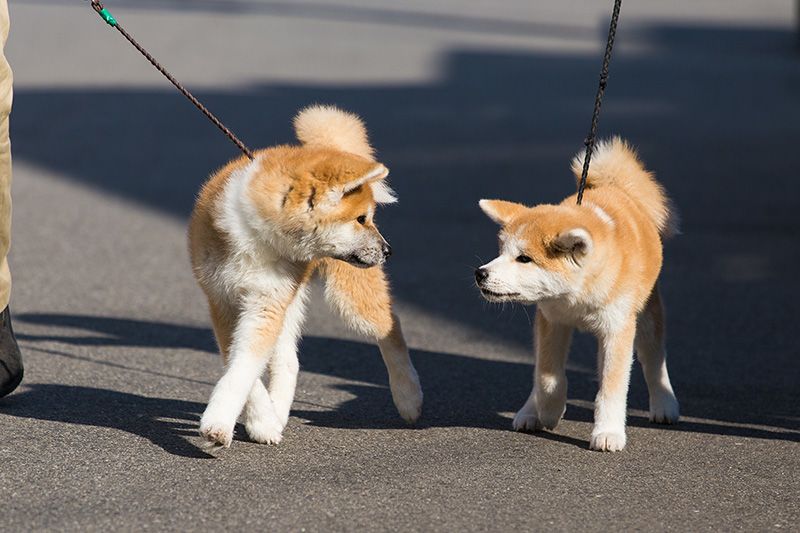 Godai, a male (left), and Suzuyo, a female, were both born in August 2017, so were three months old at the time of writing at the end of November.

The Legend of Hachikō

Given their size, are Akita-inu tough to keep as pets? No, says Nakagawa. “They’re big, so they’re powerful, but they’re a lot easier to look after than the small Shiba-inu. They faithfully follow their owners’ instructions. For this reason, they are often kept as guard dogs as well as pets.”

The classic example of the faithful Akita-inu is Hachikō, now a symbol of Shibuya Station. For almost a decade after his owner’s death, he went to the station every day to wait for him to come home from work. The legend of Hachikō began with a newspaper story that moved the nation. Since then there have been countless films and television dramas about the loyal companion. A successful 2009 adaptation, Hachi: A Dog's Tale, starring Richard Gere, transplanted the story to the United States and raised the profile of the Akita-inu around the world. 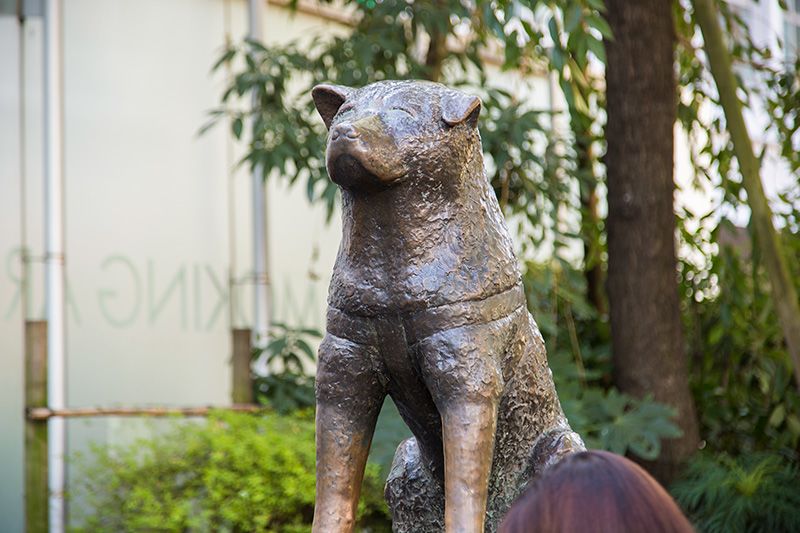 The statue of Hachikō in Shibuya is a place to meet and take photographs. The original statue was requisitioned for war materiel in World War II, making this the second incarnation.

The first Akita-inu to go overseas was a gift to Helen Keller named Kamikaze-gō that she took home from a tour of Japan. In more recent times, Russian President Vladimir Putin was a notable recipient of an Akita-inu called Yume.

Nakagawa has provided dogs to clients in Italy, Germany, and other European countries since around 30 years ago. The French film star Alain Delon is among his customers. He is said to have been very fond of the Akita-inu supplied to him by Nakagawa, and ordered a second from the breeder when the first passed away.

Nakagawa says that Akita-inu fur grows well in chilly environments. “I think they are suited to cold parts of Russia and Europe. They shed fur in warm climates, so hotter places are not really good for them.” 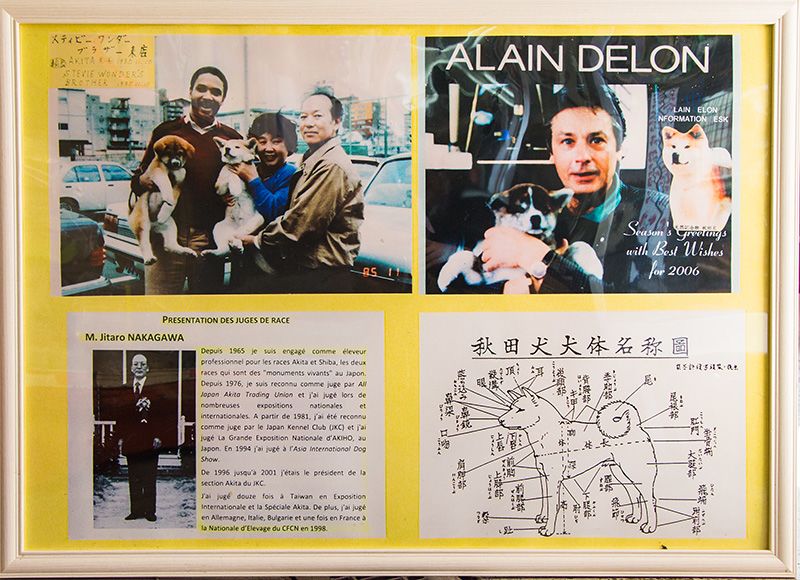 Nakagawa saw his first Akita-inu more than five decades ago at the age of 29. He was born and raised in the southern prefecture of Kagawa, far from the breed’s original homeland in northern Japan. After graduating from high school and working for a time as a sailor on a cargo ship, he went to visit his sister’s home in Osaka. He says that his brother-in-law was a dog lover, who owned Akita-inu, Shiba-inu, and mixed breeds. While staying there, Nakagawa grew to be crazy about dogs himself and started a business. At that time, breeders were rare.

At first, he also sold German shepherds and spitz dogs, but he came to specialize in Akita-inu. While learning his trade, he also acted as a handler, exhibiting the dogs at shows around the country. He became known as an Akita-inu expert. 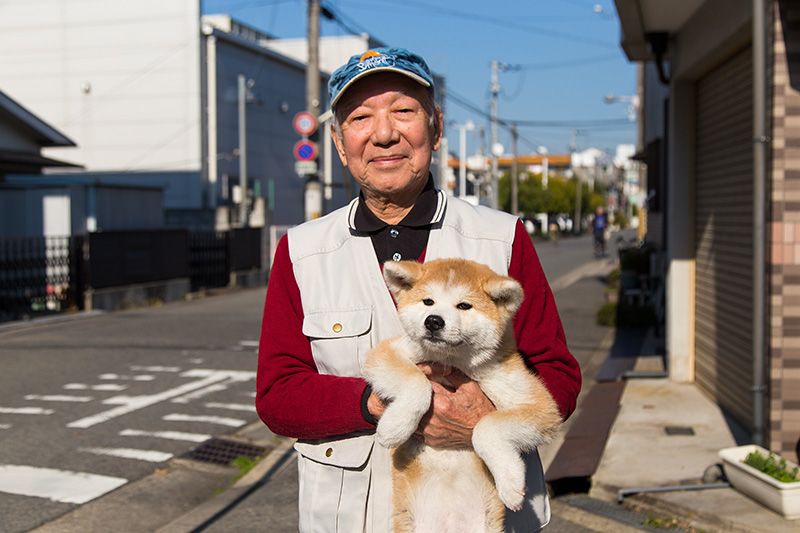 Nakagawa with one of his beloved dogs.

In 1974, he was chosen as the managing director of a nationwide Akita-inu trade organization. Two years later, he became an official examiner for the same group. In 1987 and 1988, he served as the Akita-inu representative for the Japan Kennel Club. From this time, he was in communication with kennel clubs in places like the United States and Britain, and he started to get orders from overseas. 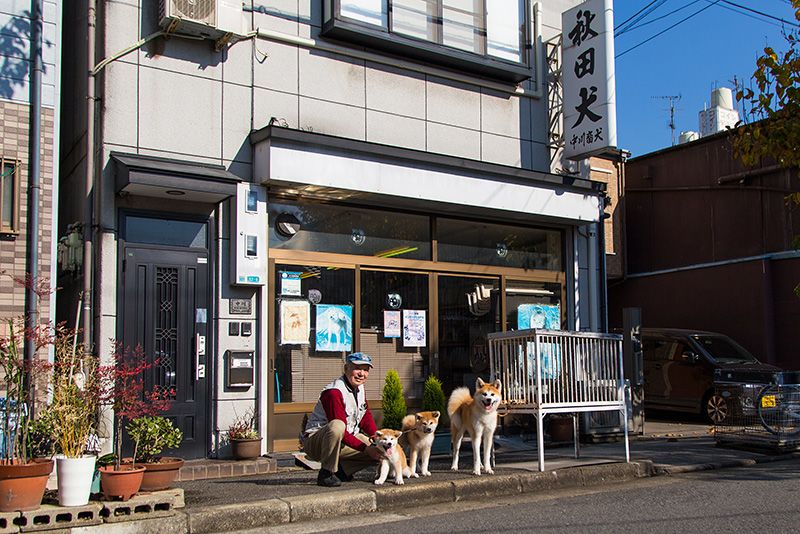 Nakagawa with dogs outside his place of business.

Akita-inu come originally from the city of Ōdate in the north of Akita Prefecture. Traditional bands of matagi hunters have operated in the northern Tōhoku region for centuries, using dogs to chase down prey like bears and deer. The Akita matagi-inu was an ancestor of the Akita-inu.

There are now some 2,000 Akita-inu across the country, but the breed has faced numerous extinction crises. When dog-fighting was in its heyday in the Edo period (1603–1868), Akita-inu were often cross-bred with larger dogs. During World War II, the government gave an order to hunt down dogs to use their fur in winter clothing and equipment for the military. German shepherds were the only dogs exempted from the order, which encouraged more hybridization. Members of the postwar occupation forces and administration took the cross between the German shepherd and Akita-inu back to the West. Further breeding of this hybrid led to a larger animal, often known as the American Akita or great Japanese dog. 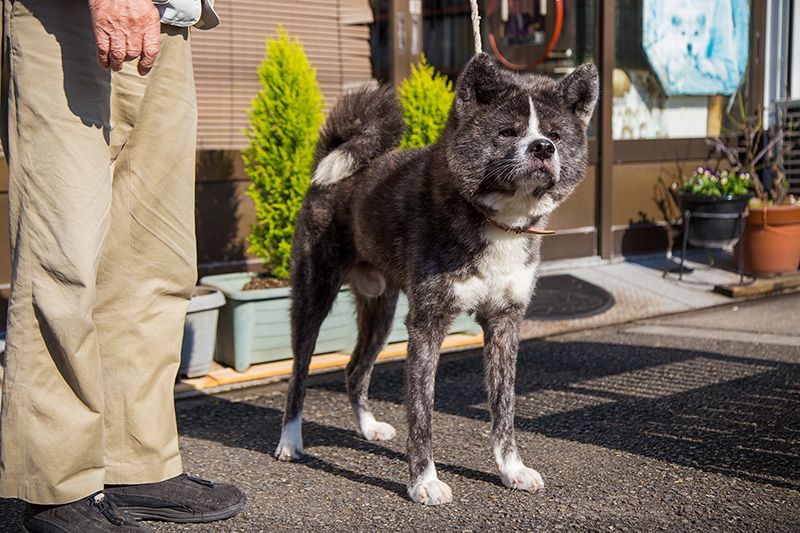 The Akita-inu Hozonkai was founded in 1927 to preserve the breed. Akita matagi-inu were used in breeding to remove traits of other dogs. In 1931, the Akita-inu was designated as a national natural monument and a large variety of dog.

JKC standards set the height of male Akita-inu at 67 centimeters from the ground to the tallest point of the back, and females at 61 centimeters. In both cases, three centimeters of variation is allowed either way. Fur color may be red fawn, brindle, white, or sesame. 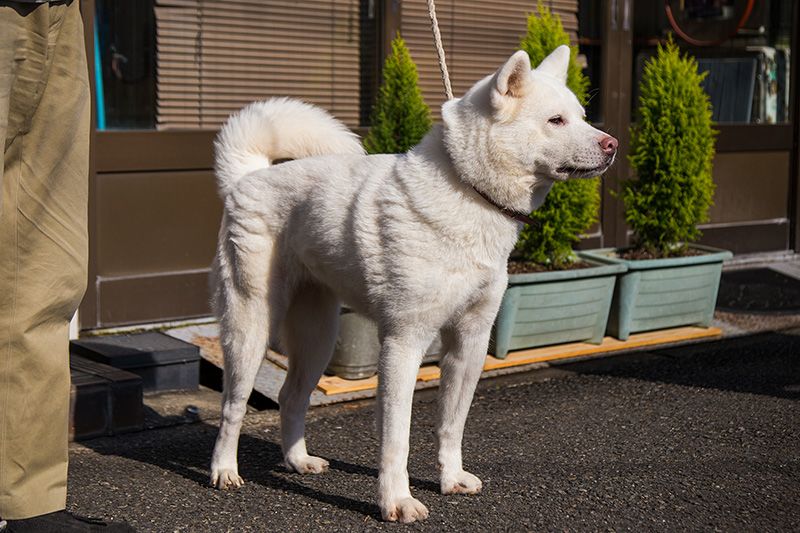 There are still many Akita-inu shows held around Japan. They are more about preserving the breed than competing over individual beauty. Judges assess such factors as body and eye size, fur color, and whether teeth are all in place. The closer the dogs are to the standard, the higher they are ranked. A qualified judge, Nakagawa explains how the dogs stand for assessment. 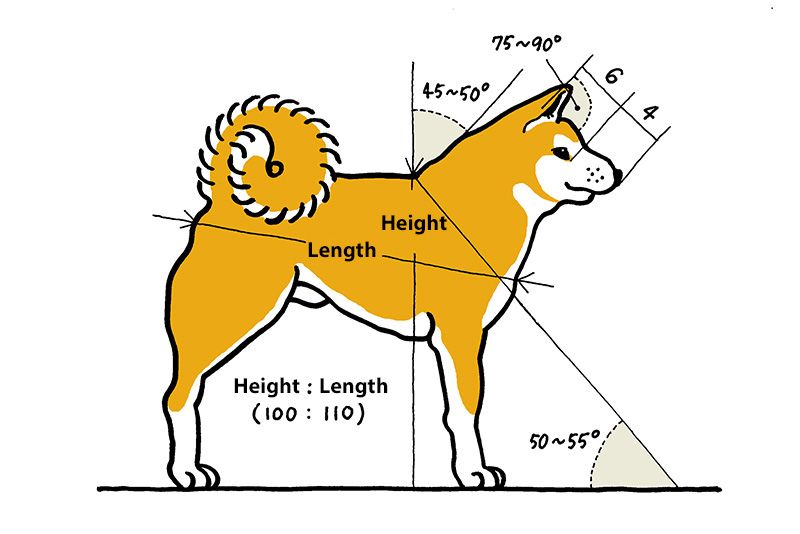 The standard measurements for an Akita-inu encompass the following specifications. The muzzle and the rest of the head should be in a 4:6 ratio. Ears should stand up at an angle of 75–90 degrees. The height and length should be in a 100:110 ratio.

“First of all, the two front legs should be in parallel descending from the chest. The hind legs should also be in parallel. If the dogs are bowlegged or knock-kneed, this is seen as indicating lack of exercise, and they are marked down. Exercise builds muscles, giving a dog a more composed stance.”

Akita-inu have a high level of basic athleticism. In Japan, it is generally forbidden to let dogs run loose, so it can be difficult to ensure sufficient exercise. Nakagawa keeps his dogs in shape with running training. 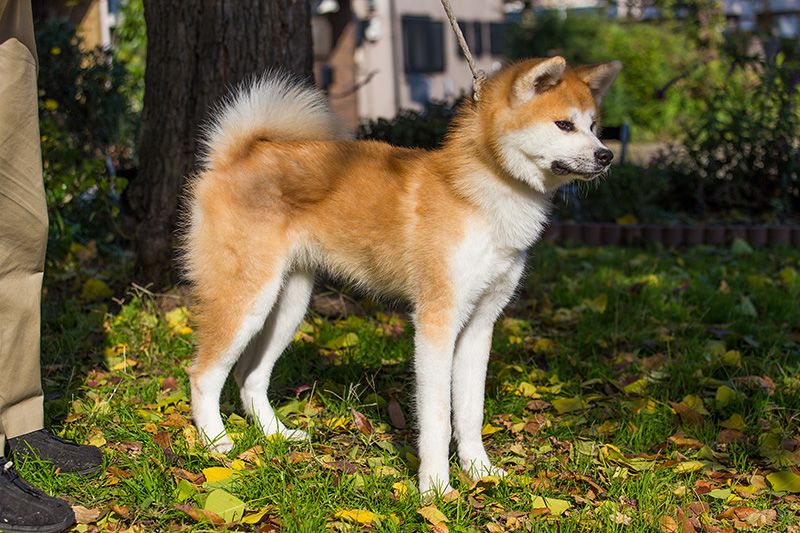 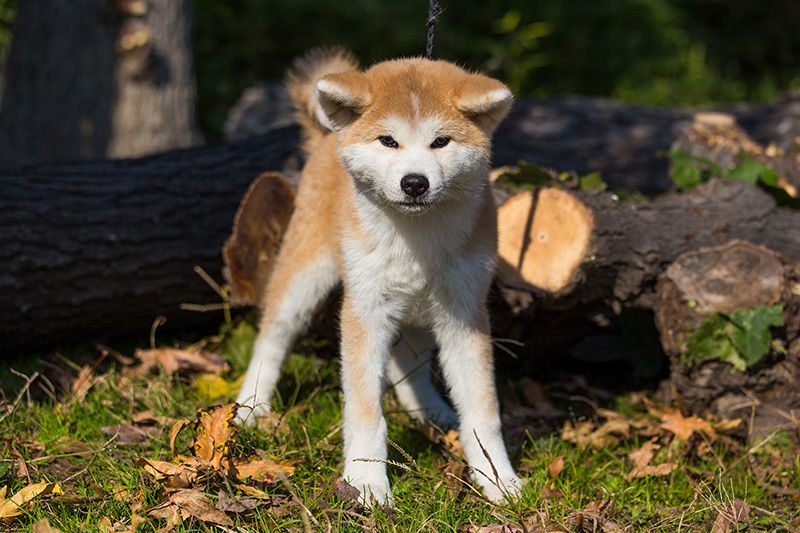 Suzuyo is nervous on her first visit to the park. Her legs are spread apart, and her ears have fallen flat.

Nakagawa has spent two-thirds of his life with Akita-inu. “I was drawn by their natural beauty. I believe it’s important to draw out dogs’ inherent strengths rather than try to eliminate any faults. This is why the Akita-inu that clearly display the breed’s characteristics are rated highly at shows. They shouldn’t have their tails docked like other dogs, and it is best for them to remain natural. Their dignified appearance, like a samurai, leaves me lost for words. This is why people can’t keep other dogs after they’ve had an Akita-inu.” 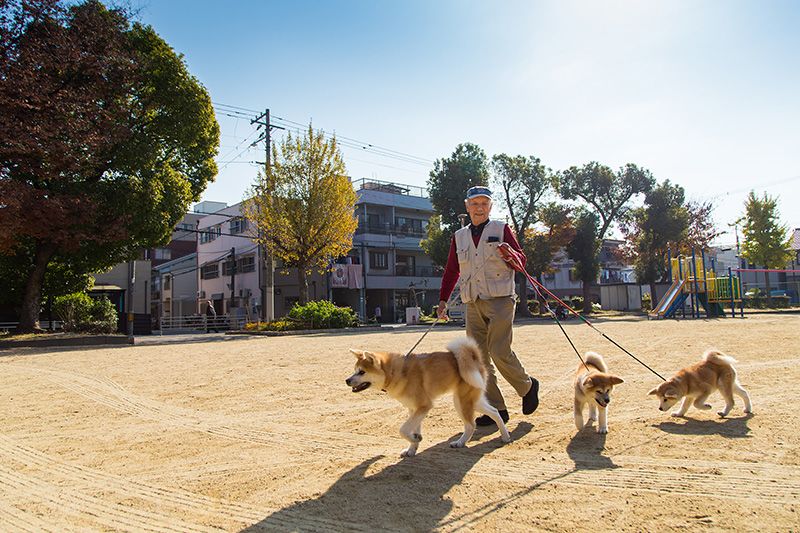