Society Jun 30, 2017
Shibuya is undergoing a major transformation ahead of the Olympic Games to be hosted in Tokyo in 2020. The huge redevelopment project will reshape the area around Shibuya Station, known to many as a cultural hub and home to the famed scramble crossing and Hachikō statue, giving it a brand-new feel.

Bringing A New Look to Shibuya

Tokyo’s bustling neighborhood of Shibuya has a reputation as a fashion and pop-culture hub, drawing hordes of visitors from around Japan and further afield. Easily recognized for its lively and much-photographed scramble crossing, the area around Shibuya Station is undergoing a massive makeover ahead of the Olympic and Paralympic Games in 2020 that will reshape the look and feel of one of the metropolis’s most popular cultural and consumer enclaves. 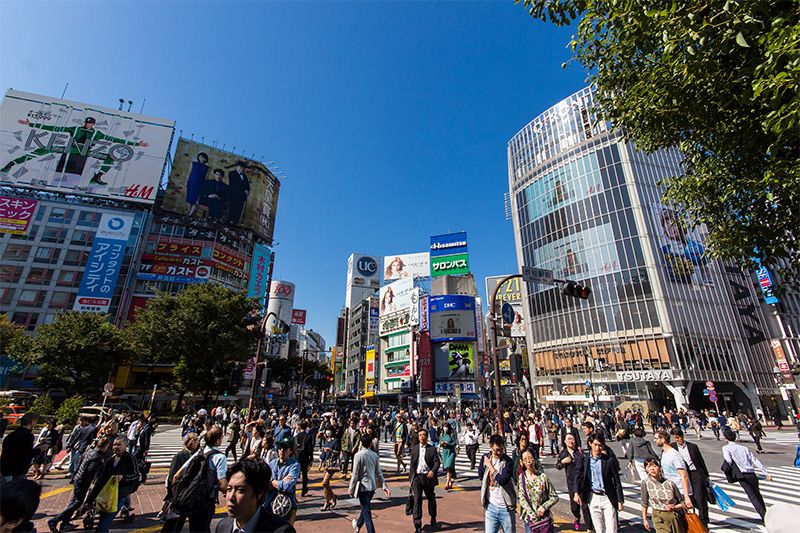 The scramble crossing outside Shibuya Station.

The long-term project has already been underway for some time, and once complete it will provide Shibuya with a new skyline of high-rise buildings and also significantly bolster the area’s infrastructure. Heralded as a once-a-century undertaking, the renovation is scheduled to be mostly completed in time to greet the influx of tourists and other visitors expected to descend on Tokyo for the Olympic and Paralympic Games in the summer of 2020.

Shibuya Station, a pulsing commuter hub housing a complex tangle of nine train and subway lines, is set to undergo a major revamp that will make it easier for travelers to navigate the sprawling terminal. As one of the first steps, in 2013 the Tōkyū Tōyoko Line was moved from the second floor to the fifth underground level, where it now connects to the Tokyo Metro’s Fukutoshin Line.

Heading the relocation were line operator Tōkyū Corporation and its affiliate, Tōkyu Land Corporation. The Shibuya-based firms are key players in the redevelopment, overseeing a grand total of seven projects in the overhaul that aims to transform the station area into a hub of business and entertainment. Progress was already evident in 2012, when the tape was cut on the 43-story Shibuya Hikarie, a multipurpose high-rise on the east side of the station whose facilities include offices and a multiuse theater. 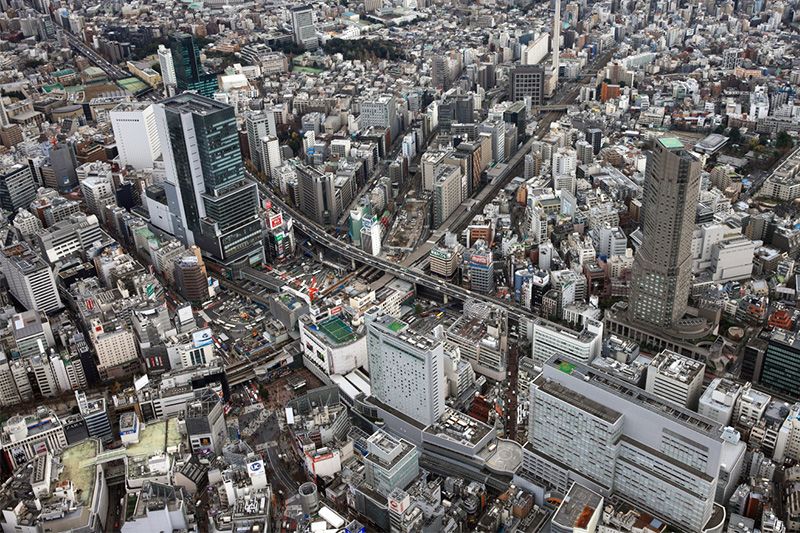 The glass-clad Shibuya Hikarie (upper left), along with the Cerulean Tower (center right), completed in 2001 on the grounds of the former Tōkyū Corporation headquarters, will eventually be joined by a host of new skyscrapers. (Photo courtesy of Tōkyū Corporation) 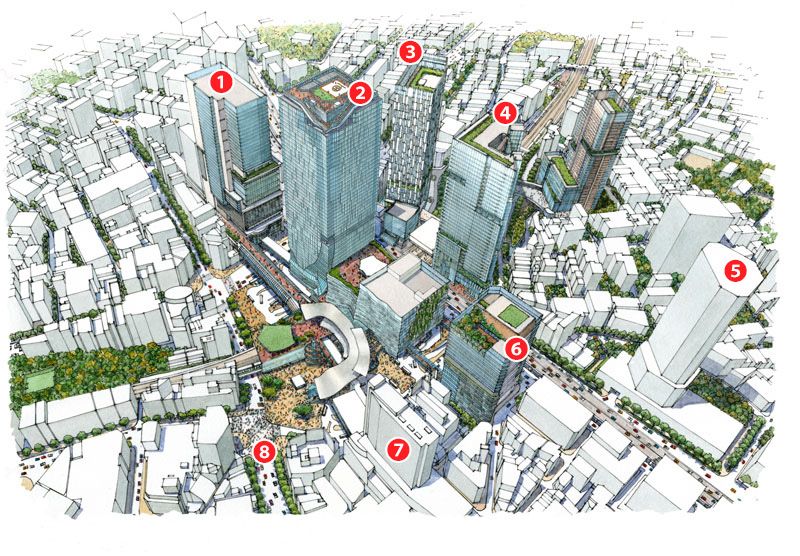 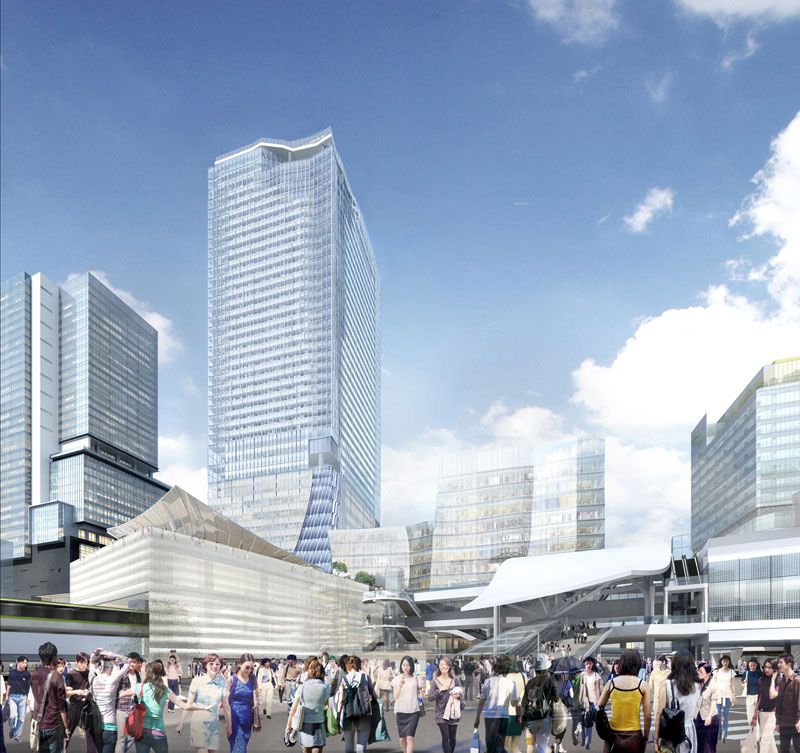 The redevelopment of the station district involves top Japanese architectural firms Kengo Kuma & Associates, Nikken Sekkei, and Sanaa. Along with overhauls to the aging terminal, the project will include as a centerpiece a new multipurpose skyscraper adjacent to Shibuya Station. Set for completion in 2019, the 230-meter structure will extend 46 floors above ground and 7 below and will dominate the east side of the station, towering over the adjacent Shibuya Hikarie by nearly 50 meters. It will be joined by several low-rise commercial buildings above and to the west of the station that will be part of the second phase of construction scheduled for completion in 2027.

The station high-rise will be topped with one of Japan’s largest observation decks. Hovering 230 meters in the air, the expansive rooftop space is almost guaranteed to become a tourist attraction, offering a panoramic view of Tokyo, including the scramble crossing and surrounding Shibuya area, Yoyogi Park and the Shinjuku skyline to the north, and Roppongi and the central business area to the east, not to mention Mount Fuji to the west on clear days. 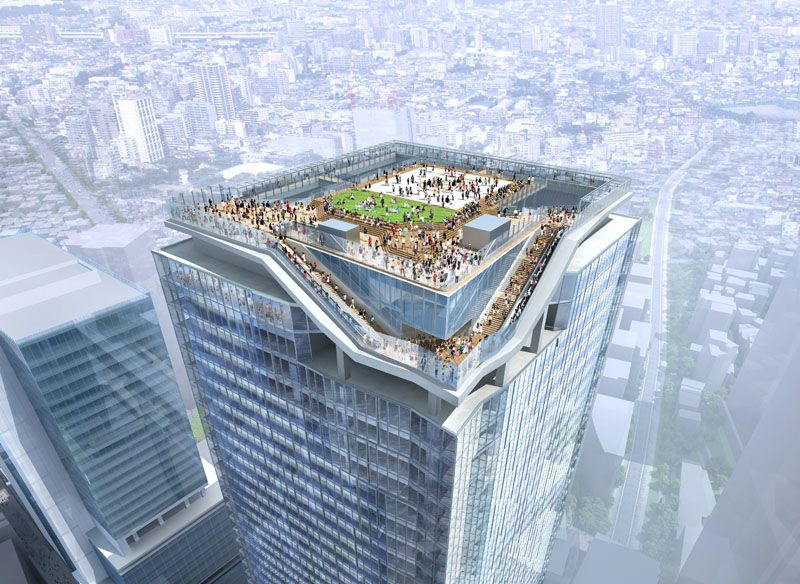 A spacious rooftop observation deck will top the Shibuya Station skyscraper. Restaurants and retail space will occupy the lower levels of the building; the central section will have communal facilities for promoting innovation among creative content firms; and the upper levels will house corporate offices. 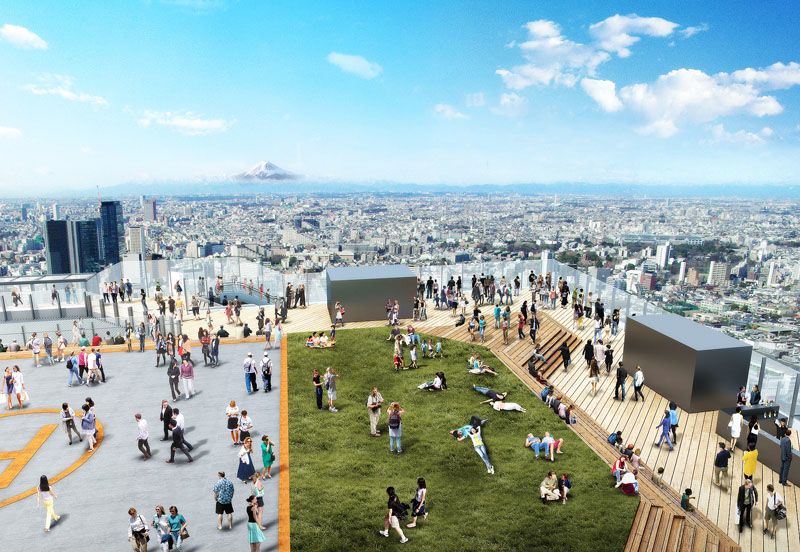 On clear days visitors to the observation deck will have an unobstructed view of Mount Fuji to the west. 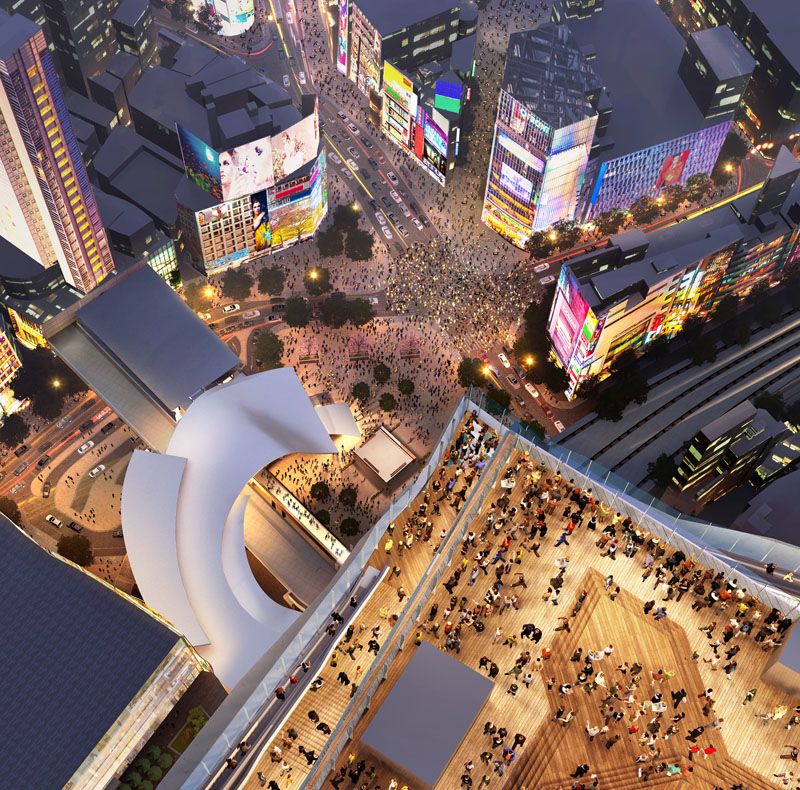 The northwest corner of the observation deck will overlook Shibuya’s scramble crossing and the lights of Dōgenzaka beyond.

A Hub for Train and Bus Travel

The redevelopment of the station area will improve how people get in and out of Shibuya. One of the most notable changes will be to Hachikō Square, with the famed meeting spot near the west exit expanding by roughly half its current size. To accommodate the extension, the terminal taxi stand will move underground.

The gently rising Dōgenzaka 1-chōme area near the station, also on the west side, will be the site of a new low-rise building featuring a ground-floor bus terminal offering coach service to and from Haneda and Narita Airports. It will be located closer to the station than the current terminal, significantly improving access between rail and road transport. The building will have a variety of services aimed at travelers, including an area to store and deliver luggage, a money exchange counter, and a tourism office. 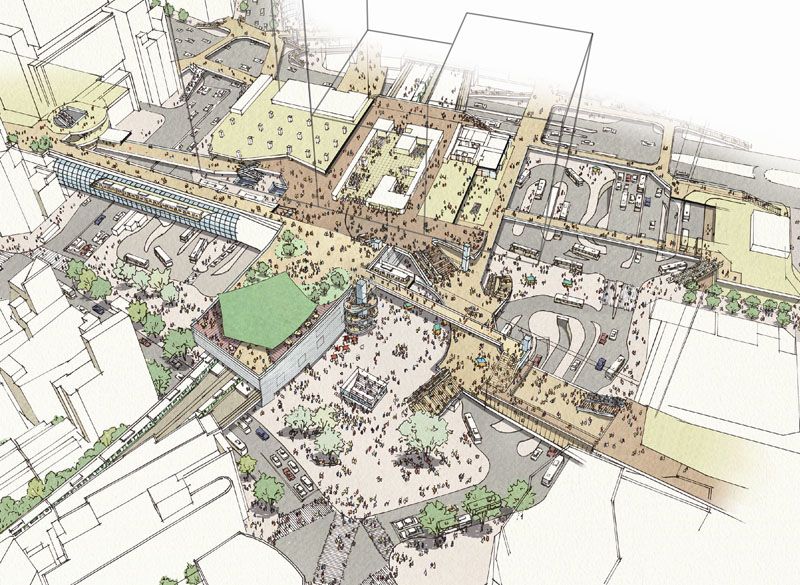 A bird’s eye view of the Shibuya Station when construction is finished in 2027. Despite significant changes, the scramble crossing and Hachikō Square will remain prominent features. (Image courtesy of Tōkyū Corporation) 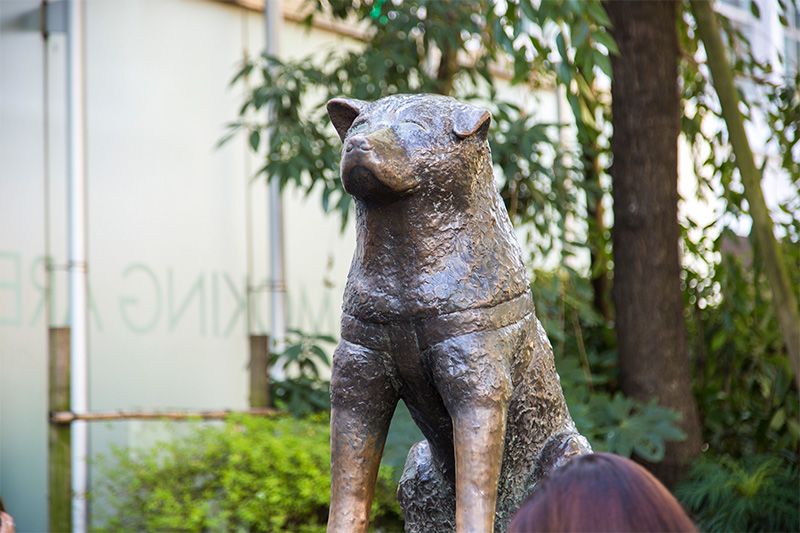 The bronze image of the loyal canine Hachikō. The square where the statue is located will be expanded. 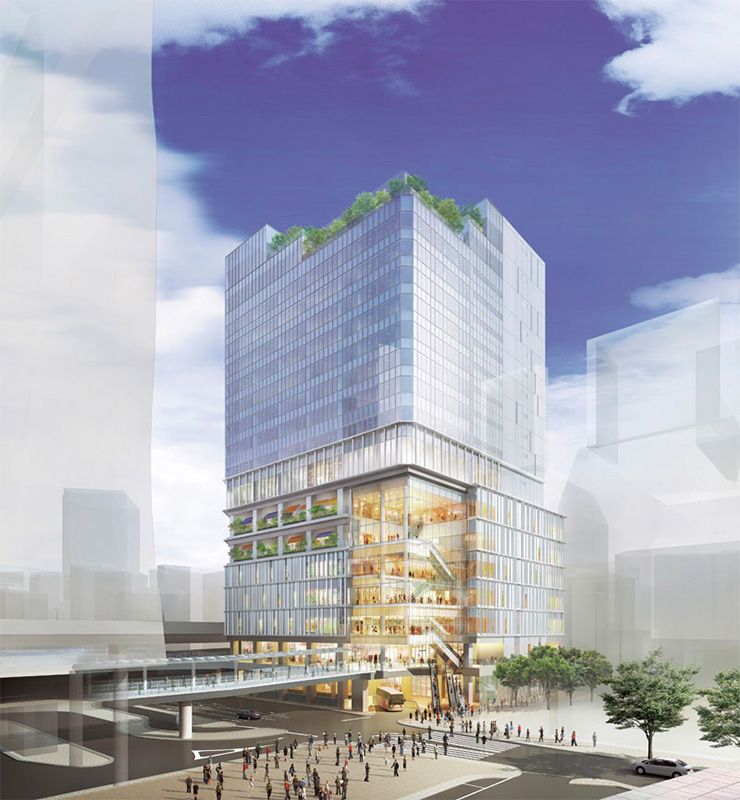 A new building in the Dōgenzaka 1-chōme area will house an airport bus terminal, making it easier for travelers to get in and out of Shibuya. (Image courtesy of Tōkyū Corporation)

Shibuya Station is also getting a makeover that will bolster safety and improve convenience. As part of remodeling, the Saikyō Line will be moved north 350 meters so it lies parallel to the Yamanote Line, while the currently separate platforms of the latter will be rebuilt as an island with the north- and south-bound trains arriving on either side. The Tokyo Metro Ginza Line will also shift 130 meters east from its current location above the JR lines, bringing it closer to Shibuya Hikarie, and ending the sight of the line’s yellow subway carriages plying the rails above congested Meiji-dōri.

This shuffling of rail lines will be carried out together with the construction of a new underground plaza at the east exit of the station. Once completed, commuters will be able to swiftly transfer between the raised JR, Ginza, and Keiō Inokashira Lines and the Tōkyū Tōyoko, Den’entoshi, Hanzōmon, and Fukutoshin Lines lower down.

The smooth flow of people will be made possible by an array of escalators and elevators at the east exit. The Shibuya River, now little more than a concrete-encased chute, will be redirected through the area, and a large catchment will be built to protect the low-lying station area from heavy rainfall. 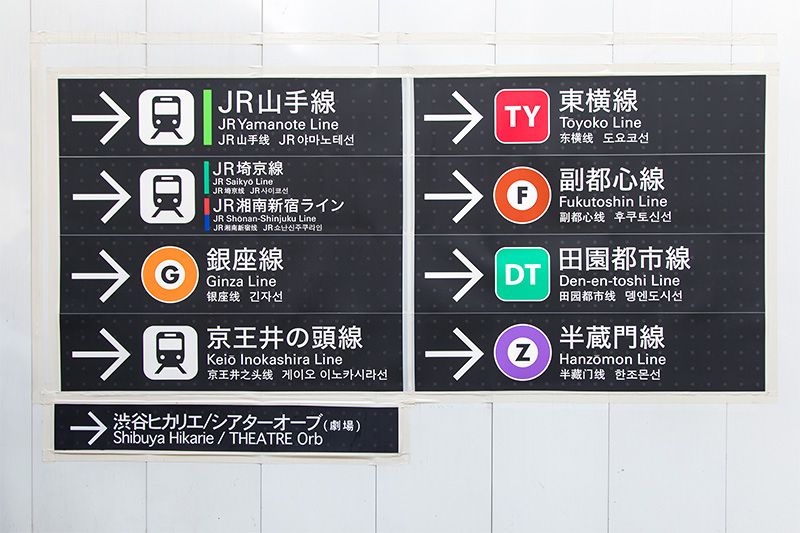 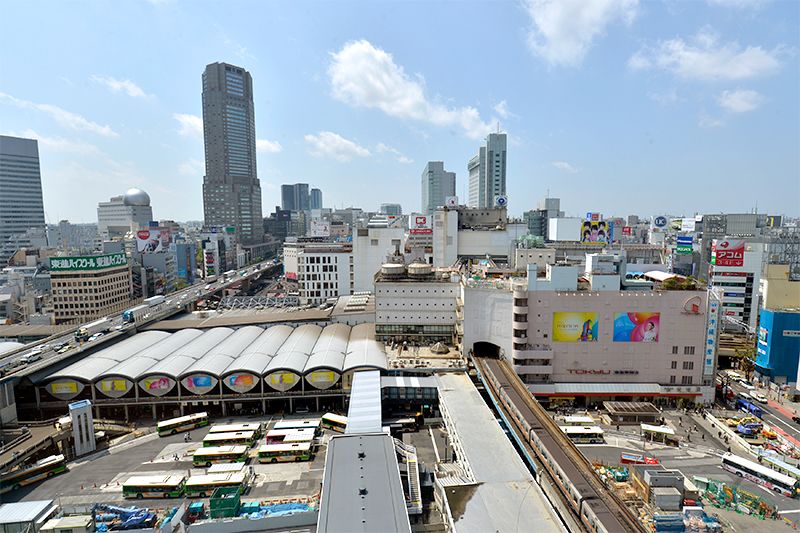 This April 2012 photo shows the wave-shaped roof of the old Tōkyū Tōyoko Line platform (center left) and the east building of the Tōkyū Department Store prior to being demolished. (© Jiji Press Photo) 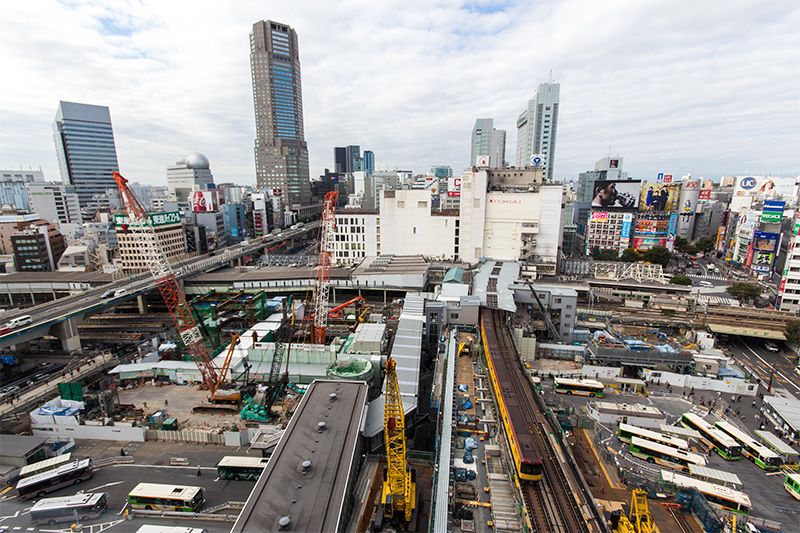 Construction progress outside the east exit of Shibuya Station as of October 2016. In 2019, the platform of the Ginza Line will move to where the yellow subway train is visible here. 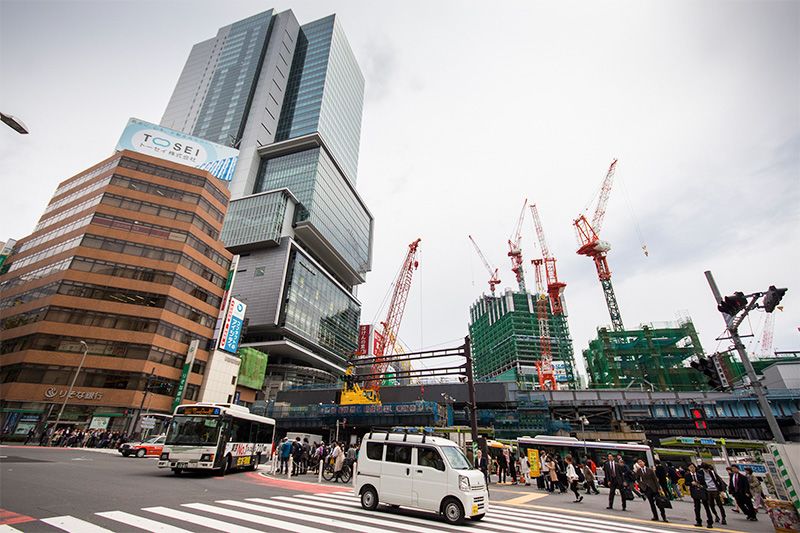 Cranes and scaffolding at the east exit of the station dominate the skyline in this photo taken at an intersection on Meiji-dōri in April 2017. At the center is the half-built Shibuya Stream, which is being constructed where the Tōkyū Toyoko Line platform used to be. 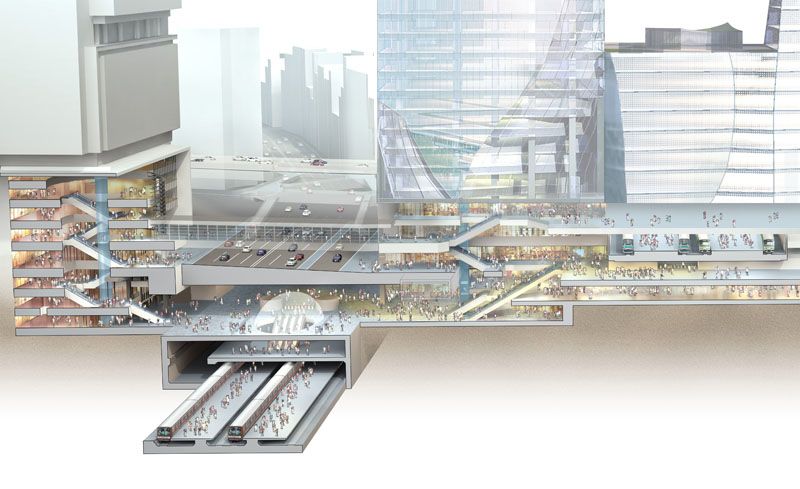 Elevators and escalators will link the different levels and passageways crisscrossing the station, making it easier for commuters to transfer between lines. (Image courtesy of Tōkyū Corporation)

The Shibuya River will be diverted to flow above the underground east exit square. (Image courtesy of Shibuya Future)

Amid the flurry of construction, concerns remain that Shibuya may become overly organized and lose the energetic jumble that is its trademark today. Such worries may be premature, though, as planners of the project have been careful to keep the chaotic scramble crossing intact and have avoided cookie-cutter design aspects for new buildings.

As an example, Shibuya Stream, a new building in the Shibuya Station South area scheduled to open in autumn 2018, will be flanked by a 600-meter walkway along the banks of the unenclosed Shibuya River. There will be trees along the entire length of the footpath, creating a unique greenspace among the high-rise buildings.

Such developments represent a turnaround from the dominant tone when Tokyo last hosted the Olympic Games in 1964. At that time Japan was in the middle of a period of high economic growth that saw the metropolis entomb its rivers in concrete as it rushed to build roads and highways. Aware of this history, the planners of the redevelopment project have begun to reverse the damage and return a water environment to the city. 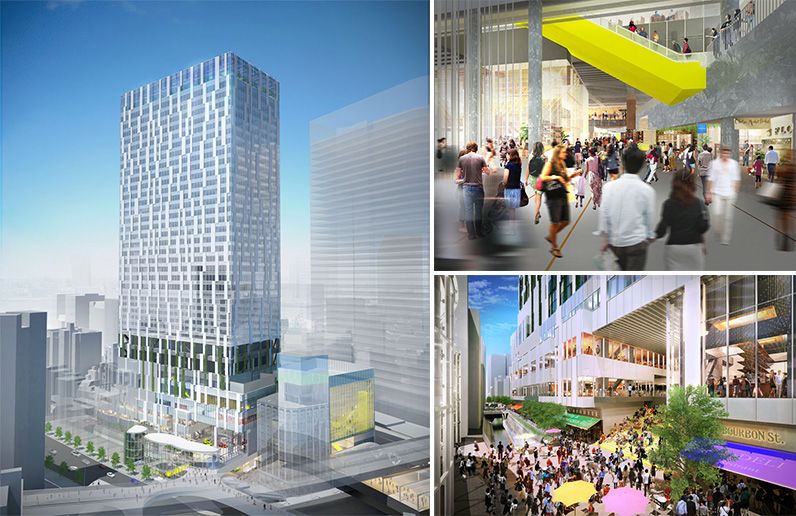 Shibuya Stream is a new skyscraper planned for the south side of the station. (Image courtesy of Tōkyū Corporation) 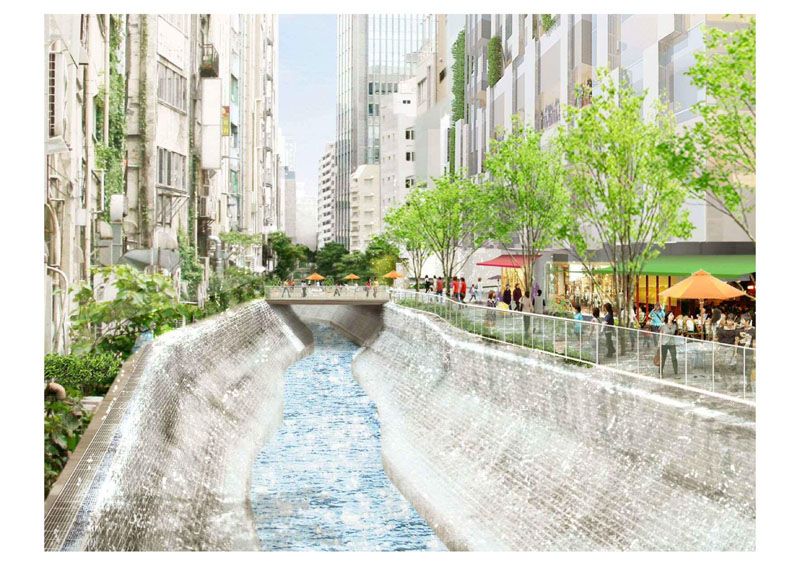 The Shibuya River will be the center of a new green area. (Image courtesy of Tōkyū Corporation)

During the IT bubble in the latter half of the 1990s, Shibuya built a reputation as Japan’s answer to Silicon Valley, attracting venture firms that were drawn by the area’s free and easy atmosphere. By the mid-2000s, however, leading IT companies had migrated from Shibuya’s “Bit Valley”—a play on the technical term as well as on “bitter,” one meaning of the shibu character in the area’s name—to other areas around Tokyo.

A primary cause of this exodus was Shibuya’s scant office space. Listings tended to be small and lacked the sprawling infrastructure standard in larger office buildings, making them unattractive to startups looking to take off. To woo back major market players and cutting-edge tech firms, planners aim to construct a whopping 260,000 square meters of new office space, including 73,000 square meters in the Shibuya Station area alone.

Special attention has been given to including design aspects that reflect Shibuya’s distinct feel while also appealing to creative workers. As an illustration, Shibuya Stream will offer more than 20 floors of spacious offices that can easily be adapted to the needs of tenants, and its fifth-floor lobby will include a ceiling arch designed after the iconic wave-shaped patterns of the Tōyoko Line’s old roof. There will also be an atrium-style area on the fourth floor with shared work spaces and compact offices for incubating startups.

Along with the redevelopment project, the Parco building, a long-time epicenter of fashion and youth culture, is set to be reborn in 2019. The 19-story commercial building will feature floors of retail space, a multipurpose theater, and facilities for nurturing the next generation of creators and entrepreneurs. 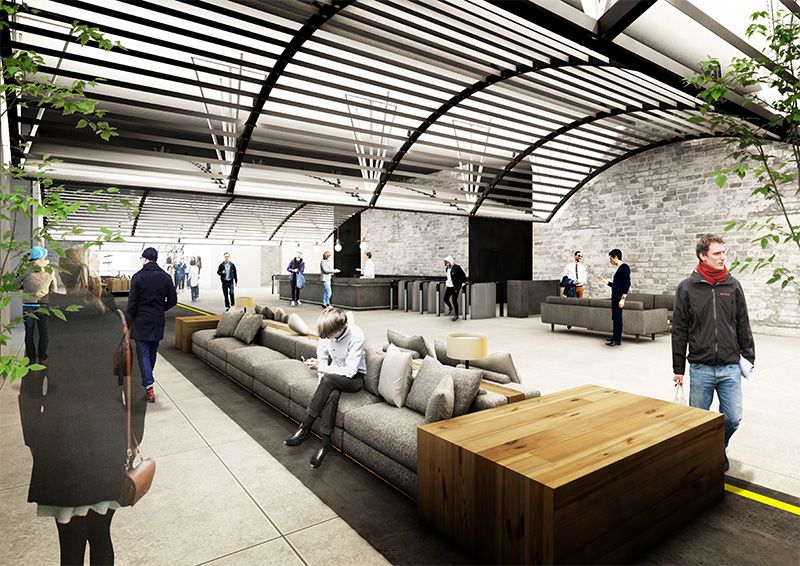 The fifth-floor lobby of Shibuya Stream. 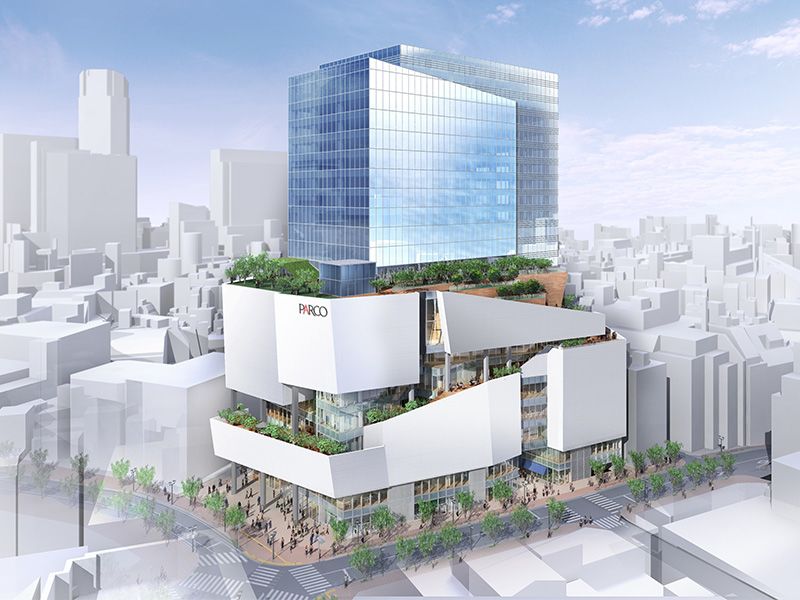 A focal point of fashion and culture, the rebuilt Shibuya Parco will open in 2019. (Image courtesy of Parco) 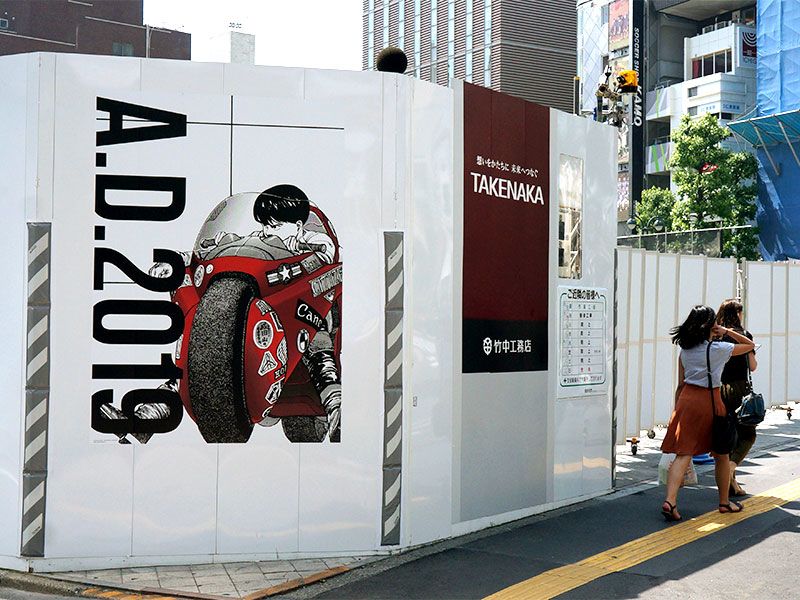 The barrier around the construction site of the new Shibuya Parco features artwork including this image based on Ōtomo Katsuhiro’s manga series Akira.

There is also Shibuya Cast, a newly opened complex next to Miyashita Park north of Shibuya Station that is designed with creative workers in mind. Along with shops and offices, the first and second floors of the building are occupied by Co-lab, a co-working space with location around the Tokyo area, and its upper stories have shared living spaces and serviced apartments. Symbolic of its creative ethos, the building sits at the head of Cat Street, a narrow lane that winds northward through the subculture and street fashion center of Harajuku.

As Shibuya Cast illustrates, the area around Shibuya Station is undergoing a transformation that will remake it into a hub for tourism, business, and innovation. However, while the redevelopment project will give Shibuya a new look, these changes will only serve to enhance the area’s existing uniqueness. 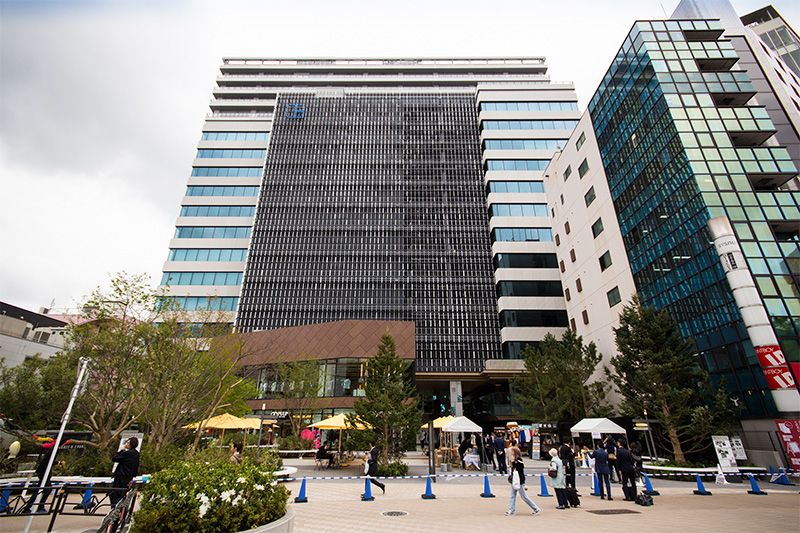 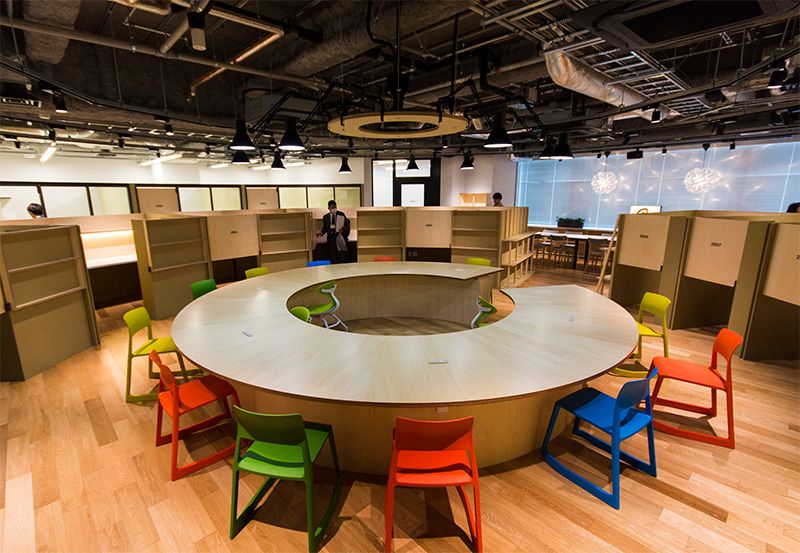 One of Co-lab’s shared office spaces at Shibuya Cast. 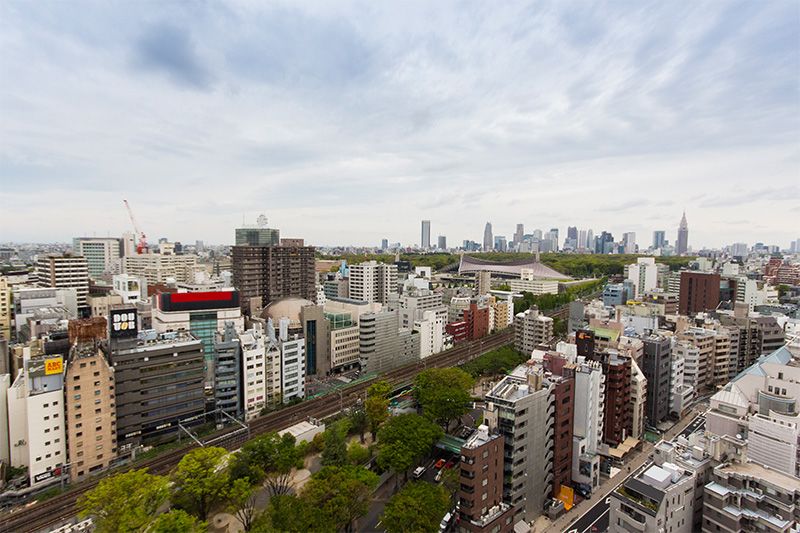 (Originally written in Japanese by Katō Jun and published on May 30, 2017.)