Society Culture Jun 14, 2016
Known as Japan’s youth and street-fashion center, Harajuku has become the epicenter of kawaii culture. The area also is home to the heavily wooded Meiji Shrine and boasts a wide selection of eateries catering to both young and old.

A Youth Haven since the 1964 Tokyo Olympics

Tokyo’s Harajuku district extends from soon to be rebuilt Harajuku Station to Omotesandō. As a bastion of fashion and youth culture, it has launched pop superstars like Kyary Pamyu Pamyu and drawn global attention as the home of kawaii culture. It also presents a subdued, mature side with many upscale restaurants and boutiques.

Known as Sendagahara during the Edo period (1603–1868), the area gradually came to be called Harajuku from the many lodgings, or shuku, located in the neighborhood. The district began to take on its present form following World War II when shops like Kiddy Land and Oriental Bazaar opened their doors along Omotesandō to cater to servicemen living in US Airforce barracks on the west side of the station. The 1964 Tokyo Olympics finally transformed it into a center for youth culture and fashion, with young Japanese curious about Western culture descending on Harajuku to mingle with foreigners from the Olympic village in nearby Yoyogi Park.

The Three Faces of Harajuku: Takeshita Street, Uraharajuku, and Omotesandō 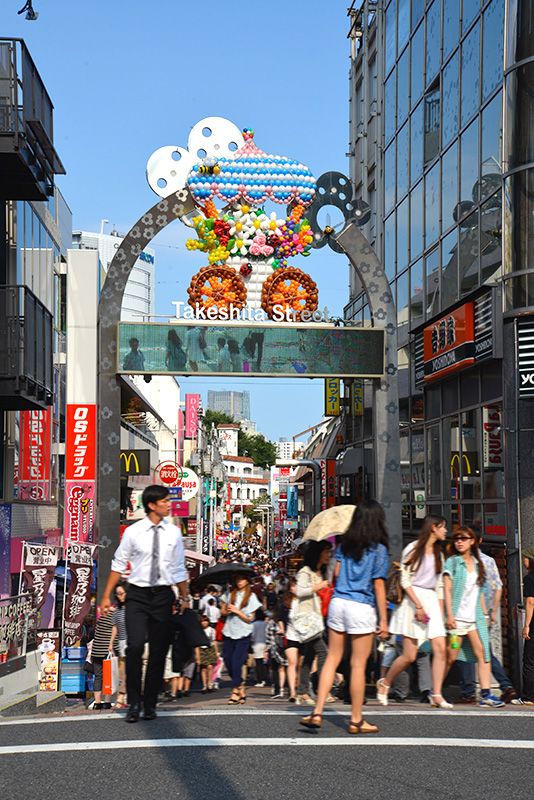 The entrance to Takeshita shopping street.

A trademark of Harajuku is the distinct fashion styles found along its lanes and thoroughfares. Takeshita-dōri, a shopping street stretching from Harajuku Station to Meiji-dōri, features stores offering casual wear aimed at teenage girls as well as ¥100 shops, brand-name outlets, confectioneries, and other retailers. It is bustling with shoppers most days and is an especially popular location for students visiting Tokyo on school trips and foreign travelers.

The backstreets of Harajuku from Cat Street to Harajuku-dōri are known as Uraharajuku or “Urahara” for short. Wanderers will find shops offering specialty items, boutiques for wearers of Lolita and gothic Lolita fashion, used clothing stores, cafés, and other stop offs. 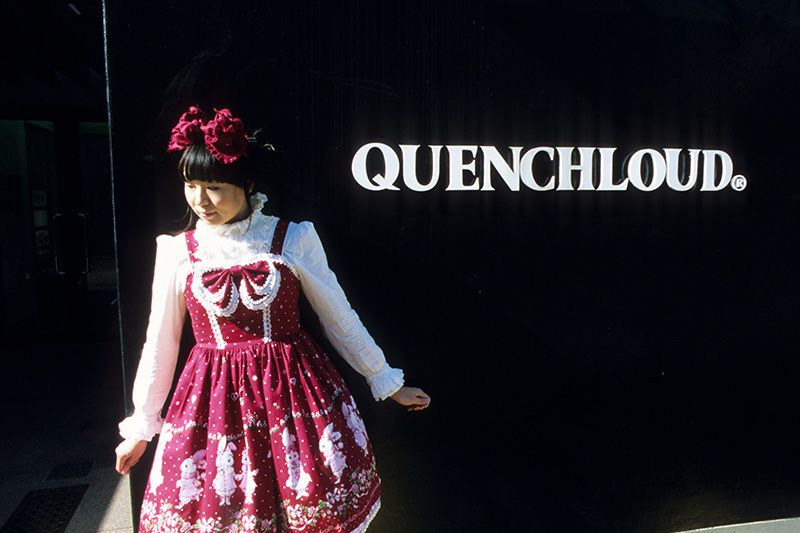 A young woman sporting the amarori or “sweet” style of Lolita fashion.

Since December 2014 Moshi Moshi Box, a multi-service venue along Meiji-dōri, has been disseminating information about Harajuku and pop-culture. The brightly colored center has English-speaking staff, and patrons can visit to buy souvenirs, access the establishment’s free Wi-Fi, exchange currency, send packages overseas, and secure hotels and other lodgings. 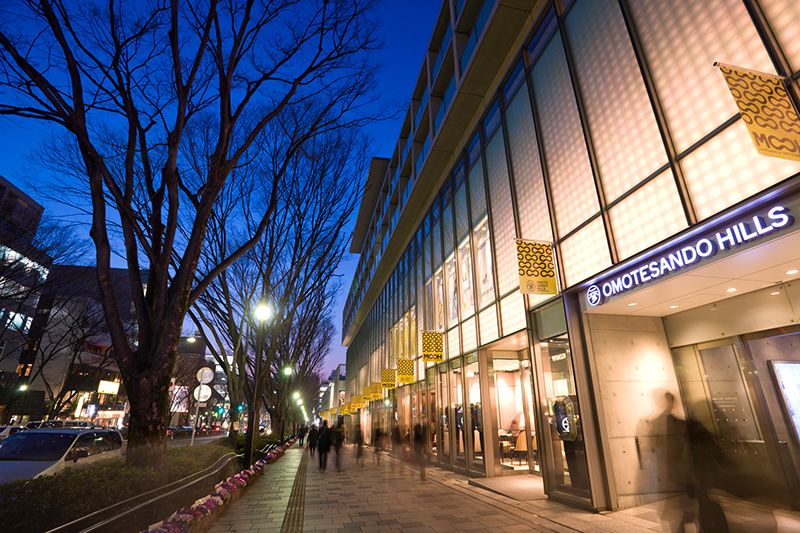 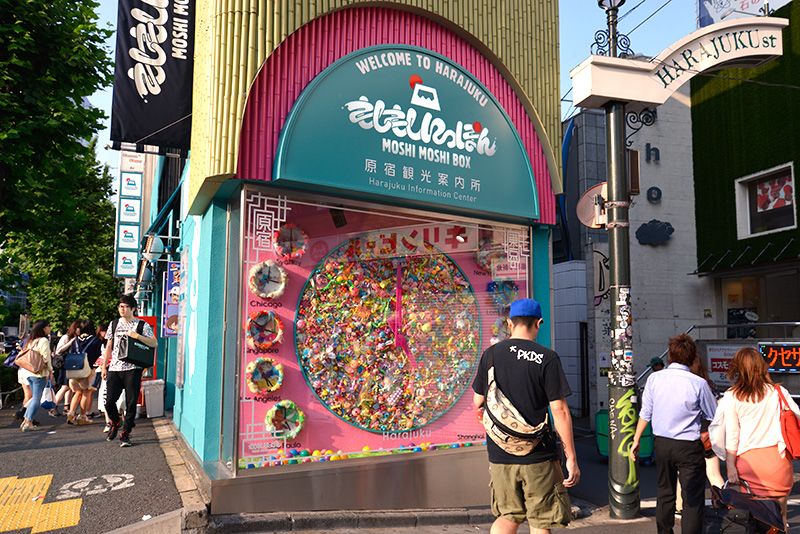 The Home of Kawaii 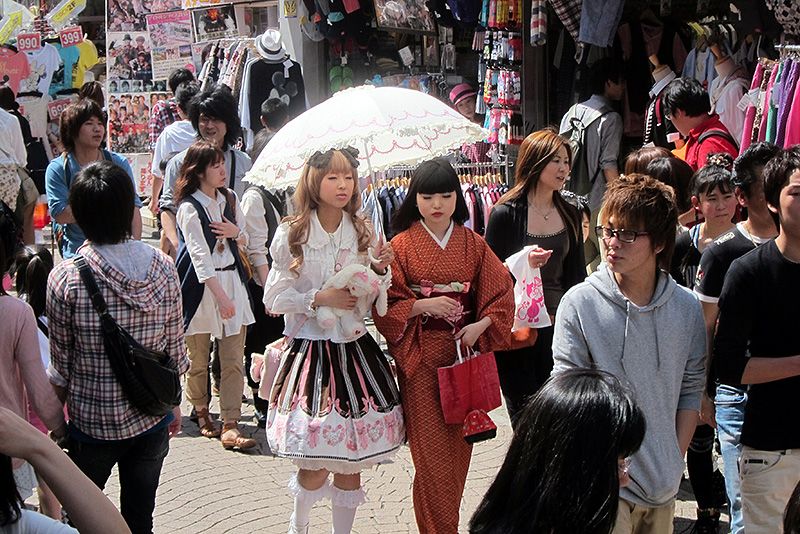 Harajuku is as much a place to see as be seen.

Harajuku is the focal point for kawaii culture, represented most visibly by Kyary Pamyu Pamyu. Since being discovered on the streets of the district, the pop idol, who was inspired in part by Gwen Stefani’s hit song “Harajuku Girls,” has gone on to garner international attention with her brand of kawaii.

With the rise of kawaii culture Harajuku has seen a surge in new, cutely designed shopping centers, including Cute Cube Harajuku, Harajuku Alta, and SoLaDo. Not to be outdone, long-time Harajuku fixture Kiddy Land has also given its sales area, which features a large selection of Hello Kitty and other character goods, a kawaii makeover. 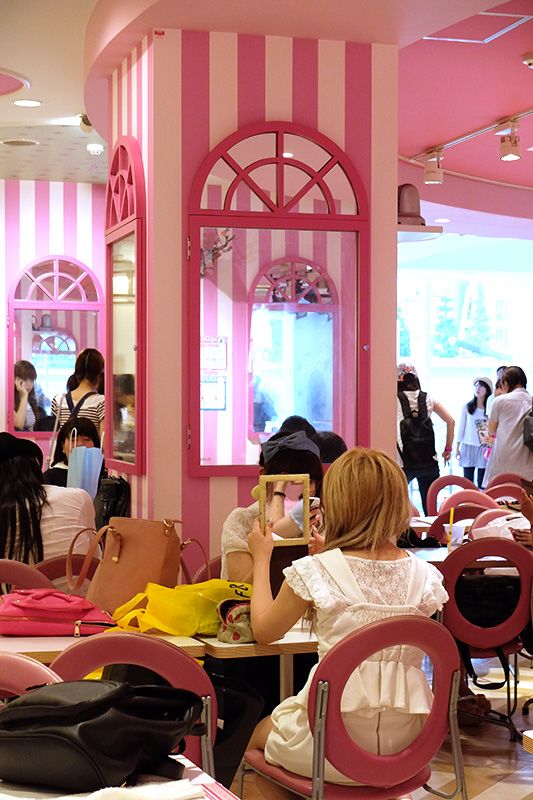 A woman checks her appearance inside SoLaDo.

A thrilling appeal for fashion-conscious Harajuku regulars is the prospect of a magazine carrying a “street snap” of their ensemble in an issue. These tenacious devotees spare no trouble to have their attire noticed and can often be spotted posing on the lanes of Uraharajuku.

Alongside fashion, Harajuku has also long been on the cutting edge of dining, introducing such tasty treats to Japan as pancakes, flavored popcorn, and crepes. Visitors to the district can still find specialty shops hawking these goodies, where on weekends and holidays customers may have to wait in line close to an hour to get a taste. Confections are part of the landscape and the sight of someone enjoying a succulent crepe as they stroll has long been a fixture along Takeshita-dōri.

Those looking for more standard fare can satiate their appetite at Harajuku’s eclectic mix of chain outlets and local eateries. Young visitors will likely finding something fitting their tastes in the regions of Takeshita-dōri and Uraharajuku, while more mature diners may prefer the upscale offerings along Omotesandō.

Whether on a date or out with friends, diners might consider swinging by Shop Noa after their meal for a playful commemorative shot at a purikura photo booth. Located on Takeshita-dōri, the shop features Tokyo’s widest selection of machines and is a popular location among travelers and high school girls.

(Left) A sweetly garnished pancake. (Right) A display case outside a crepe shop.

Visitors tired from the hustle and bustle of Harajuku and seeking a more serene experience can cross to the west side of the station to visit the sprawling grounds of Meiji Shrine or head to Tōgō Shrine near the intersection of Takeshita-dōri and Meiji-dōri. Yoyogi Park, Tokyo’s fifth largest public green space, is also a short walk from the station. Sitting adjacent to the park is Yoyogi National Stadium, which, along with being a venue for the upcoming 2020 Tokyo Olympics, offers an outdoor stage and cycling course among its publicly available amenities. 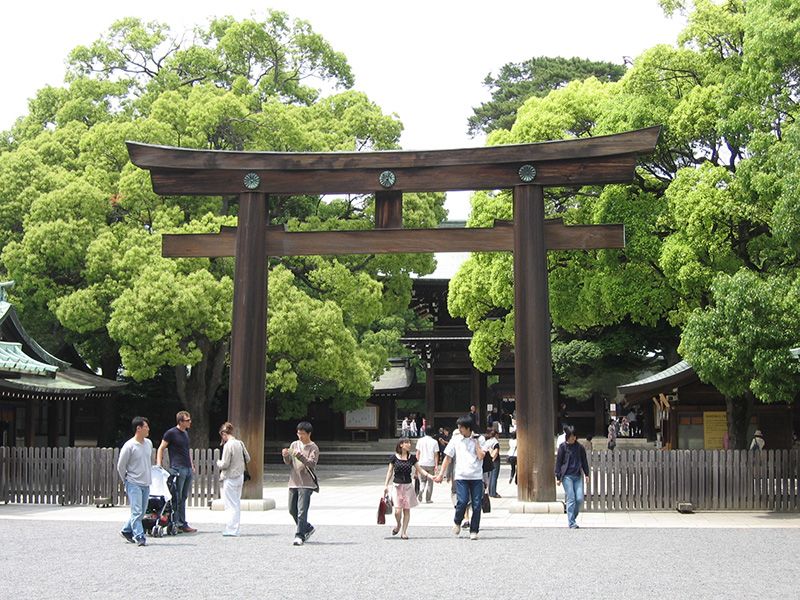 (Banner photo: The entrance to Takeshita-dōri.)