Daily Life at a Sumō Stable: A Visit to the Takadagawa Stable

Culture Japan in Video Aug 23, 2018
The sumō heya, or training stable, is where keiko (daily practice) takes place and wrestlers live communally. We visited the Takadagawa stable in Tokyo’s Kiyosumi-Shirakawa district and observed the daily routine, including both brutal practice sessions and a more laid-back pace during the rest of the day.

All professional sumō wrestlers, from the lowliest recruits to the top dog yokozuna grand champions, belong to heya, or training stables. Under the Nihon Sumō Kyōkai, the association that governs the sport in Japan, there are currently 47 stables training nearly 700 wrestlers. During the grand sumō tournaments held six times a year, wrestlers from the same stable are never paired against each other, although in rare cases stablemates may face off on the final day of the tournament if they have won an equal number of bouts up to then.

It’s difficult to call sumō an individual sport, since although matches are one-on-one, there is a communal aspect to sumō. During practice, rikishi (wrestlers) grapple to mutually improve their strength and technique. Not only do wrestlers train together, they also live together, unlike other sports where athletes may share quarters during training camps but normally live apart. At sumō stables, though, everyone eats and sleeps under the same roof.

The typical sumō stable consists of a keikoba (practice area) on the ground floor and wrestlers’ living quarters on the higher floors. The oyakata (stablemaster) and his family often occupy the topmost floor. The setup is thoroughly paternalistic, with the stablemaster acting as “father” to his charges and his wife, the okamisan, the “mother.” In addition to looking after the wrestlers as she would her own sons, the okamisan handles the day-to-day operations of the stable.

As a rule, the only wrestlers who can leave the stable and live on their own are sekitori, wrestlers in the two highest-ranked divisions (makuuchi and jūryō) who are married. Everyone else from the makushita division on down lives in shared quarters (ōbeya), although making it to sekitori rank entitles them to a private room. Thus, home for most wrestlers is the stable they are affiliated with.

Every stable has a slightly different routine, but one thing they have in common is an early start. Wrestlers generally rise around 6:00 in the morning and head for the keikoba after washing up and getting ready for the day. They do not eat breakfast; their first meal of the day will be around noon, after they finish the day’s practice.

At the Takadagawa stable, it’s up to the wrestlers to decide when they start practice, but no one is a slugabed. Since the higher-ranking sekitori start practice early, the lower ranks have to get going before that. By 7:00, most of the wrestlers are in the keikoba, where each follows his own warm-up routine to loosen up. 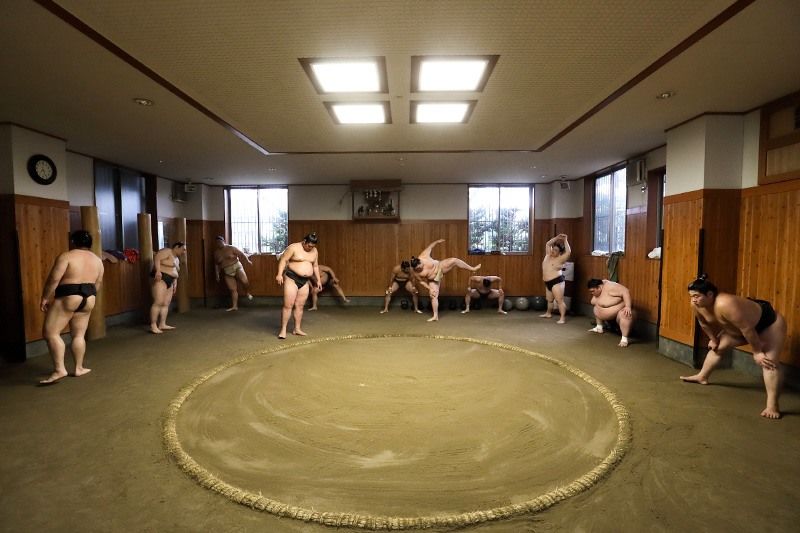 At this stage of the practice, no one enters the ring. The wrestlers practice the basic sumō moves around the ring—shiko (walking squats), teppō (lunging against a post), and suriashi (a crouching walk without lifting the feet off the ground)—over and over, building up muscle memory. Carefully repeating these moves helps build up lower body strength and flexibility and protects against injury. There’s no chatting: each wrestler concentrates on his breathing and is mindful of every inch of his body. This is all in preparation for the actual grueling wrestling that awaits them later in the ring. 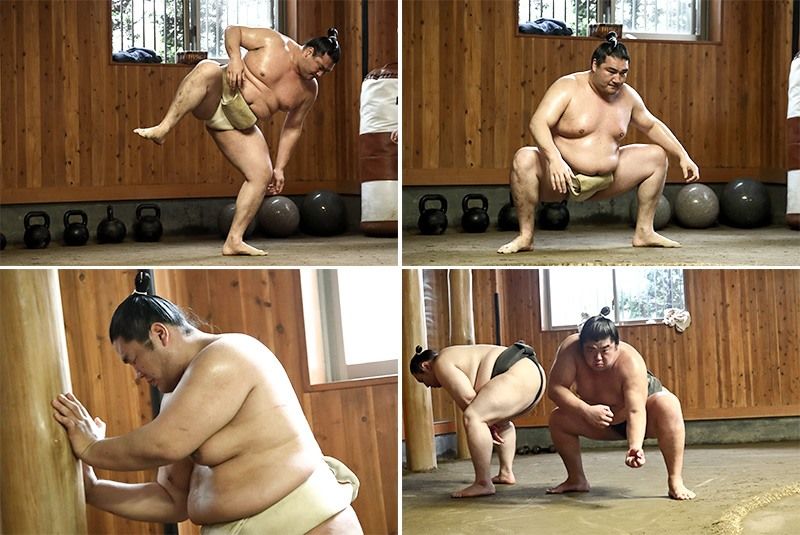 The wrestlers are sweating heavily from their warm-up when stablemaster Takadagawa arrives shortly after 8:00. The atmosphere immediately thickens with tension as under his watchful eye the lower-ranked wrestlers enter the ring and grapple with one stablemate after another. Winners of their bouts pick who they want to fight next, and especially strong wrestlers can go on for bout after bout. 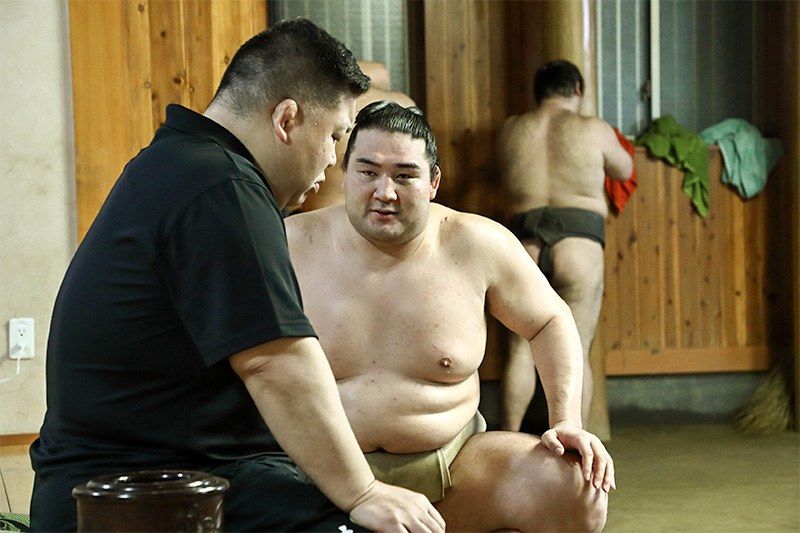 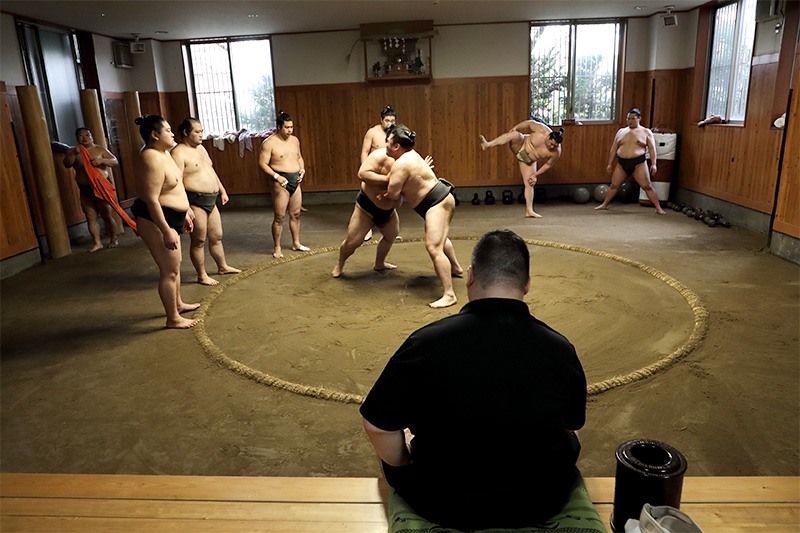 Stablemaster Takadagawa, clad in a loincloth like the wrestlers he oversees, will occasionally bark out instructions. He is particularly vigilant about awkward throws or other physical movements that could lead to an injury. Today, he advises the wrestlers that “Keiko isn’t about winning or losing; you battle against yourself. Even if you lose a bout, there’s still tomorrow, but if you injure yourself, it’s all over.” 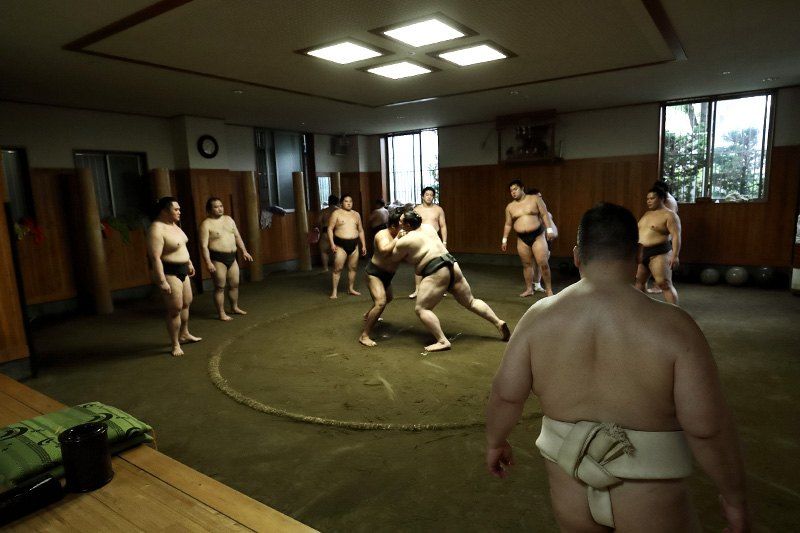 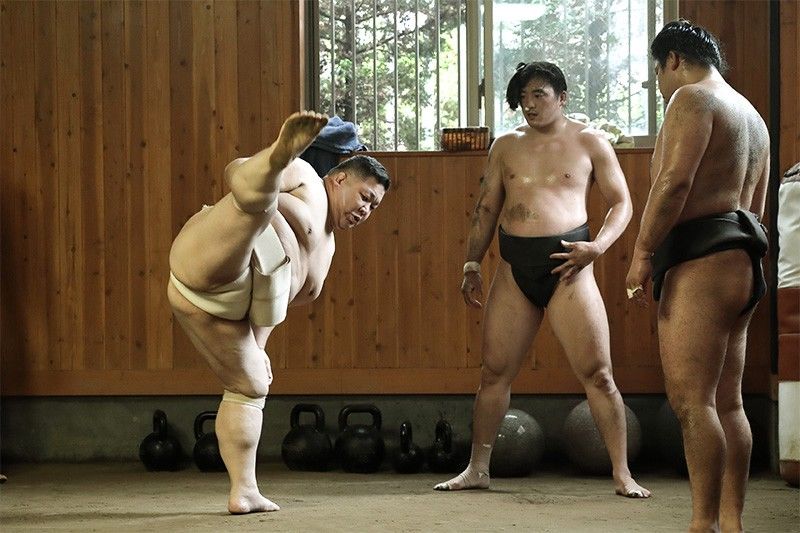 Sumō stables belong to groupings called ichimon. Of current 47 stables, 43 belong to six ichimon, while the other 4 stables are unaffiliated. Stables within the same grouping have mutual exchanges. For example, on the day we visited, two sandanme wrestlers from the Minezaki stable, like the Takadagawa stable a member of the Nishonoseki ichimon, were present for a “visiting practice,” or degeiko. Stablemaster Takadagawa directed the visiting wrestlers as carefully as his own charges, demonstrating the correct way to perform shiko and admonishing them: “The point isn’t how many of these moves you do. You need to practice to get your center of gravity way down. It’s tough, but that’s the right way to do it. You do it so that you’ll get better at it. You know you want to get better, don’t you?”

Wrestlers take turns lunging at each other in butsukari-geiko.

The practice session continues, with relatively evenly matched wrestlers engaging each other in one bout after another. The final stage of practice is butsukari-geiko, where one wrestler lunges at his sparring partner’s chest with all his might and pushes him out of the ring. That wrestler then rolls to the ground and the roles are reversed. In many cases, the stronger wrestler of the pair is the one who receives the lunges. Within five minutes his chest has gotten bright red from the thrusting and the air is filled with the grunting breaths of his challenger, who can by this time barely stand, so great is the effort involved. 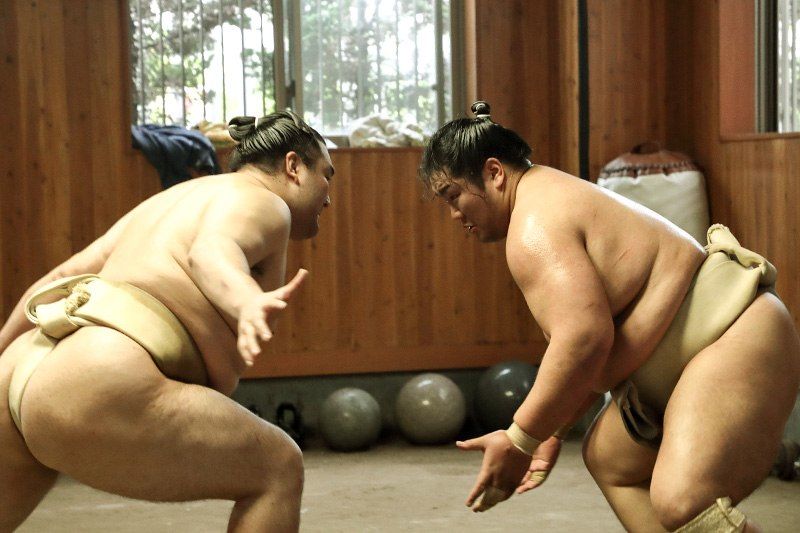 The sekitori enter the ring at the end of the practice. The force they expend in butting against each other is on a whole other level. 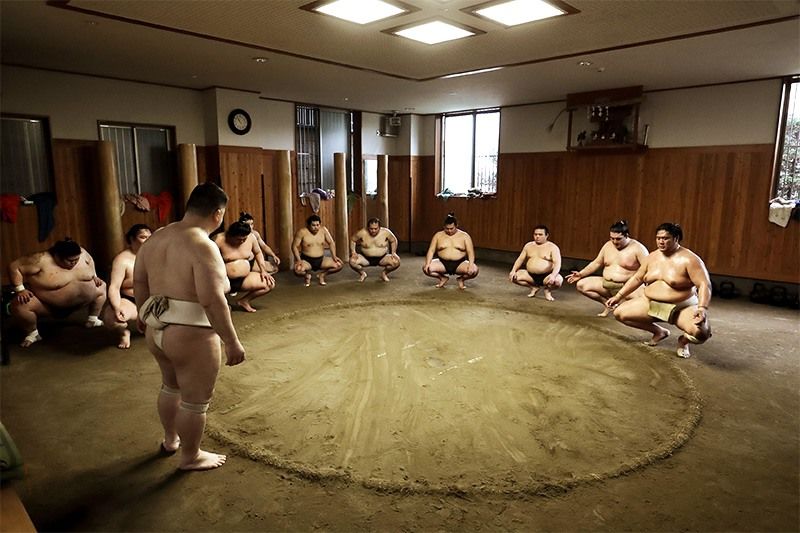 Keiko ends with words from the stablemaster, and the wrestlers perform a ritual kashiwade clap while in crouching position.

After practice ends, the wrestlers head for the bath, sekitori going first. Wrestlers on kitchen duty need to make sure that the meal is ready by the time the sekitori have finished bathing, so they will have left the keikoba early and started meal preparations by shortly after 8:00. 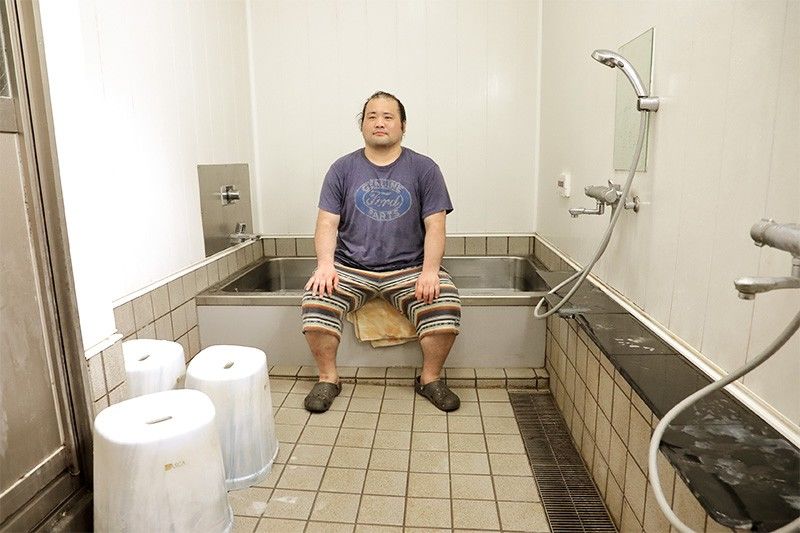 The wrestlers take turns bathing, three at a time. Stable member Maenofuji in the bathroom.

The stable chef Sakura (left); on duty in the kitchen today is Zendaishō.

Many people are familiar with the word chanko, which usually refers to the one-pot stew that’s the centerpiece of sumō stable meals, but in sumō parlance chanko refers to the meal as a whole. Every stable has its distinctive recipe for its chanko stew; it’s the ideal food for sumō wrestlers, as it’s nutritionally balanced and easy to digest, and it warms up the body to speed up metabolic activity. The wrestlers gobble it down, broth and all, accompanied by copious quantities of white rice. After the meal, they immediately head off for a nap, a routine that helps them gain the weight they need to win in the ring.

The centerpiece of the meal is the chanko stew (left), accompanied by a variety of dishes such as tuna sashimi, a chicken and onion stir-fry, sautéed vegetables simmered in sweetened soy sauce, salad, and more. 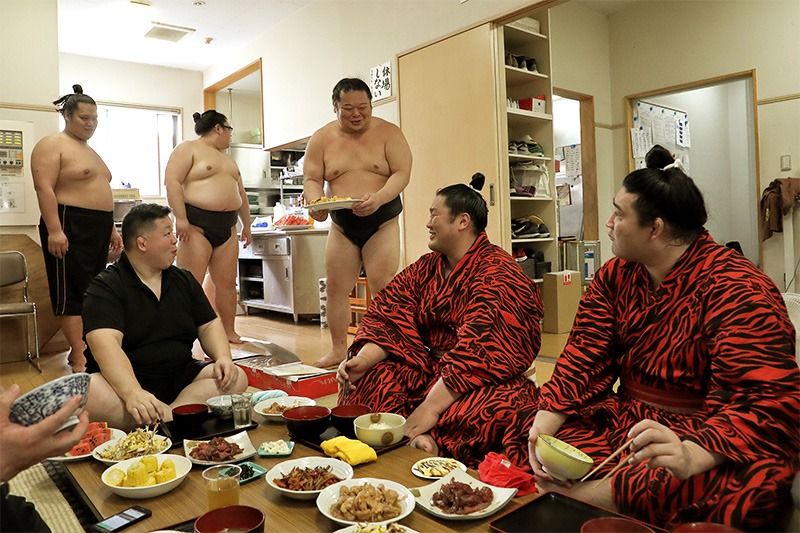 The oyakata is the first to sit down to eat, joined eventually by sekitori fresh from the bath. The relaxed atmosphere is completely different from the tension in the air during keiko, but a lot of the conversation centers on sumō. 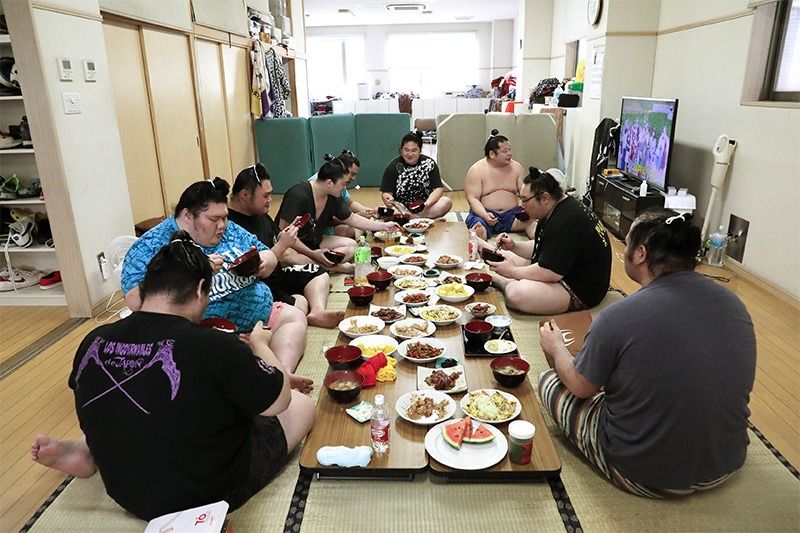 After the sekitori finish their meal, the lower ranks take their turn.

In addition to wrestlers, sumō stables are also home to affiliated personnel like referees (gyōji), bout callers (yobidashi), and hairdressers (tokoyama). Gyōji, attired in traditional garb, are known mainly for standing in the ring and adjudicating matches, but they also handle a variety of tasks outside the ring. For example, they are responsible for overseeing ring announcements and drawing up the daily match lists during tournaments, arranging for accommodation and transportation during regional tours (jungyō), and performing various duties related to the operation of the stable. Yobidashi are most prominent for announcing the names of the wrestlers pairing for a match, but they also see to the setting up and maintenance of the ring during tournaments. Tokoyama are in charge of doing up the wrestlers’ hair in their distinctive topknots. 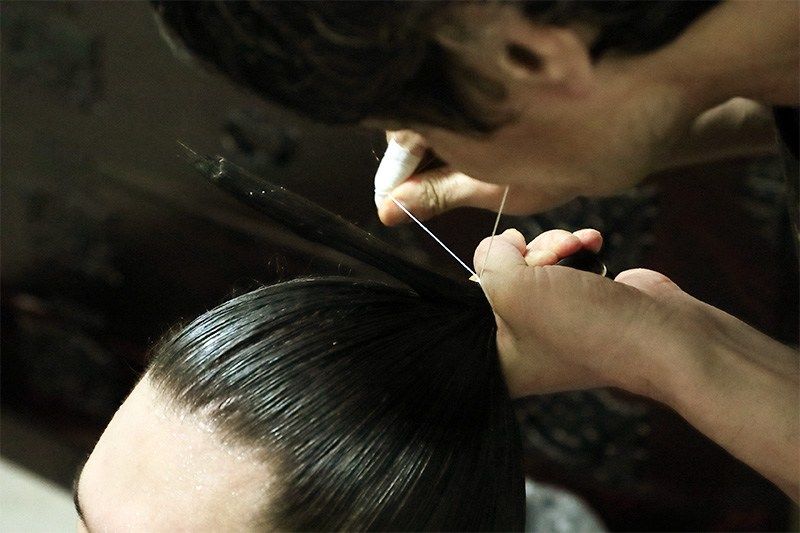 After eating, the sekitori return to their rooms to have their hair attended to by the tokoyama, a traditional sumō hairdresser. 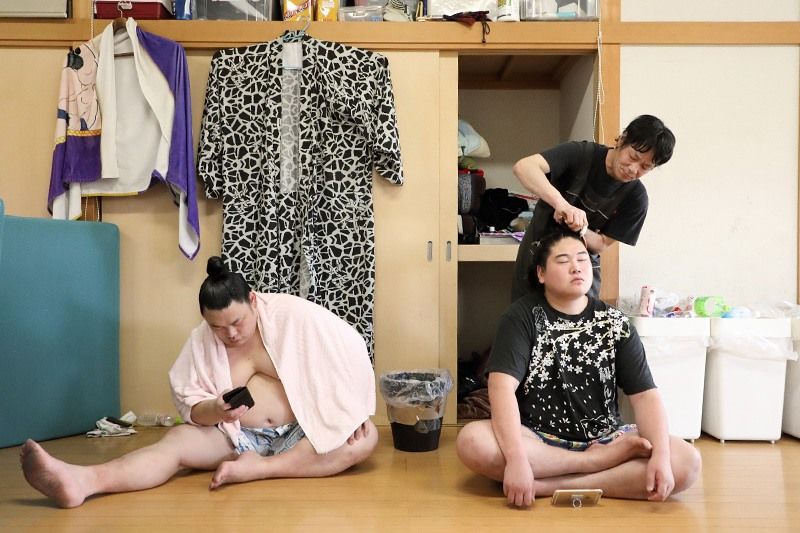 Now it’s the lower-ranked wrestlers’ turn, in the shared room that is their living quarters. 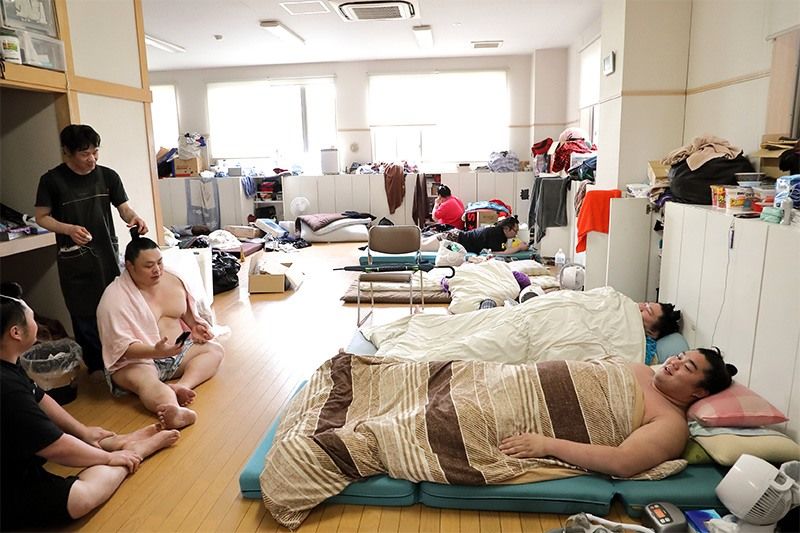 Naptime after the midday meal. Except for those on cleaning, laundry, or cooking duty, rikishi are free to spend the time until the evening meal as they like.

The Takadagawa stable has no yobidashi, but it has two gyōji, one of whom, who goes by the traditional name of Shikimori Kandayū XI, is the top-ranked referee among the 40 active referees as of July 2018. According to Kandayū, 80% of his duties involve work behind the scenes. He even sometimes plays the role of counselor to the rikishi and attends to their mental health, saying, “I believe my role is to support the rikishi so that they can perform at their best; the referee’s real work is seeing to a whole range of tasks.” 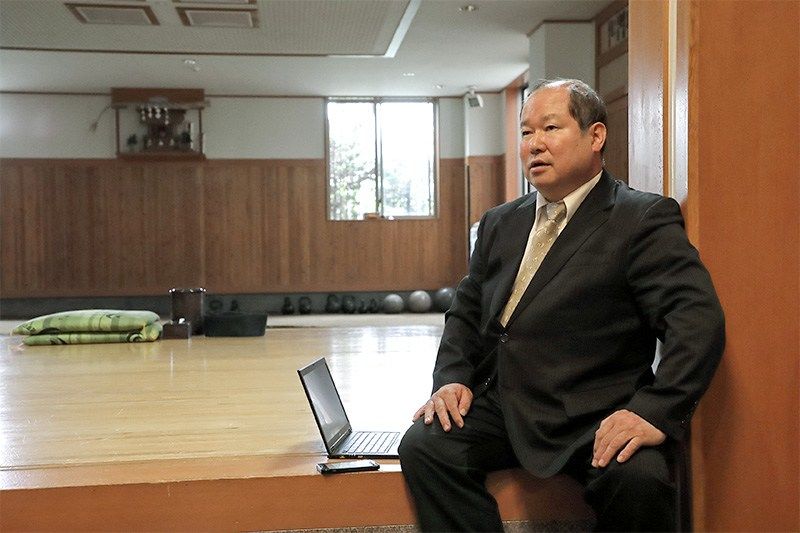 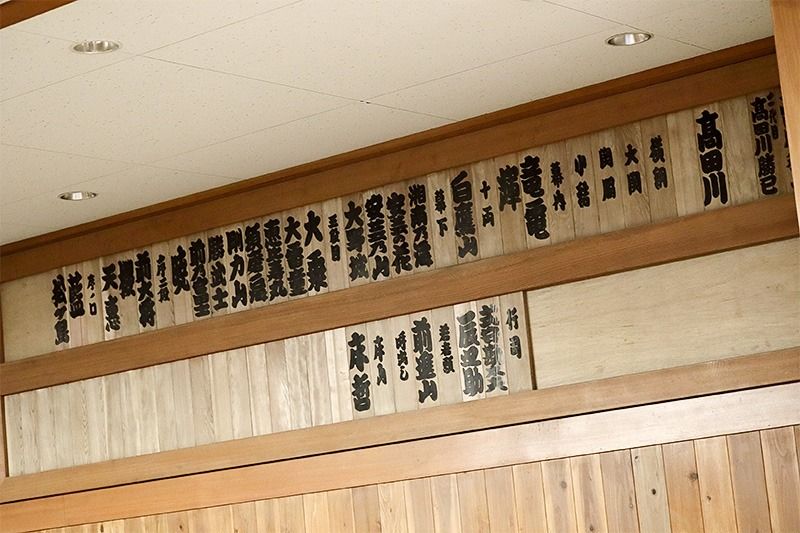 Wooden name plates written by Kandayū in traditional sumō script. The Takadagawa stable, with the oyakata as head, has 20 rikishi, two gyōji, and one tokoyama. (The wrestlers’ rankings shown here were as of the May 2018 grand tournament.)

There’s a saying that keiko and chanko are what make rikishi strong. Wrestlers, entering a stable as raw recruits, mature both mentally and physically by eating and sleeping under the same roof, engaging in friendly rivalry during practice bouts, and supporting each other during tournaments. Life at a sumō stable is like being in one big family, where everyone from the oyakata on down pulls together to ensure that the stable’s wrestlers will shine in the ring and exert a certain mystique on the public when outside of it. 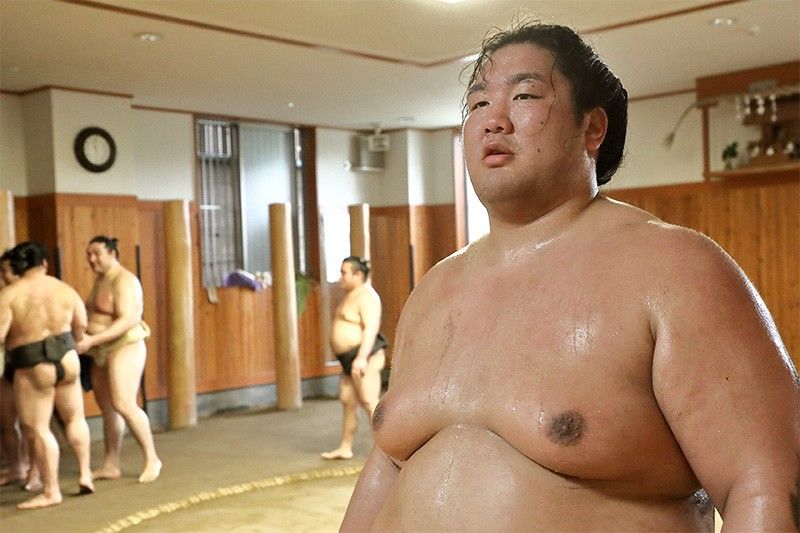 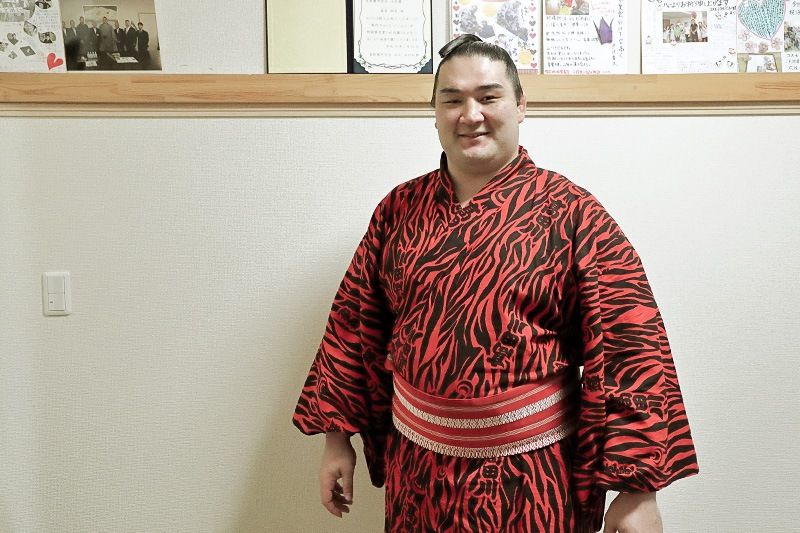 (Originally published in Japanese on August 3, 2018. With thanks to sumō web magazine Osumō-san. Reporting and text by Matsumoto Takuya of Nippon.com. Photographs by Hanai Tomoko. Video by Noguchi Kaori.)