Culture Lifestyle Mar 30, 2015
Japanese people have loved onsen since ancient times for the comfort they bring to mind and body. We introduce the beauty benefits and anti-ageing effects offered by hot springs while examining the relationship between the Japanese people and onsen.

Japan is the world’s “onsen superpower.” The country boasts more than 27,000 hot springs, which together spew out some 2.6 million liters of water every minute. Moreover, hot water over 42°C accounts for 47% of that output. Since most of the 3,085 lodging facilities in hot spring regions across the country are situated along a volcanic belt, there is no need for an external heating source. Water resources for the springs are naturally replenished by the large amount of precipitation that falls over the Japanese archipelago in the form of snow in winter and rain during the rainy and typhoon season.

Blessed with such a wealth of onsen, Japanese people developed from ancient times a unique bathing culture that includes hot spring therapy.

Thought to have been written in 733, the Izumo no Kuni Fudoki (Chronicle of the Land of Izumo) records the following about Tamatsukuri Onsen, located in present-day Shimane Prefecture.

“A hot spring spouts forth in this area along the riverside. The hot spring comes out right at a spot of scenic beauty overlooking the land and sea. Men and women, young and old alike go back and forth along the trail following the seashore with the hustle and bustle as if at the market, enjoying a good time drinking and reveling. Bathing just once in this hot spring will clear your skin, and continued bathing will cure all of your aches and pains. Achieving such positive results without exception from long ago, people call it ‘the water of the gods.’”

From this, it is easy to see what onsen have meant to Japanese people since ancient times, and why they love hot springs so much. “Bathing just once in this hot spring will clear your skin, and continued bathing will cure all of your aches and pains.” Written close to 1,300 years ago, these words aptly convey the essence of onsen and their value in a time without beauty products or medicinal products. 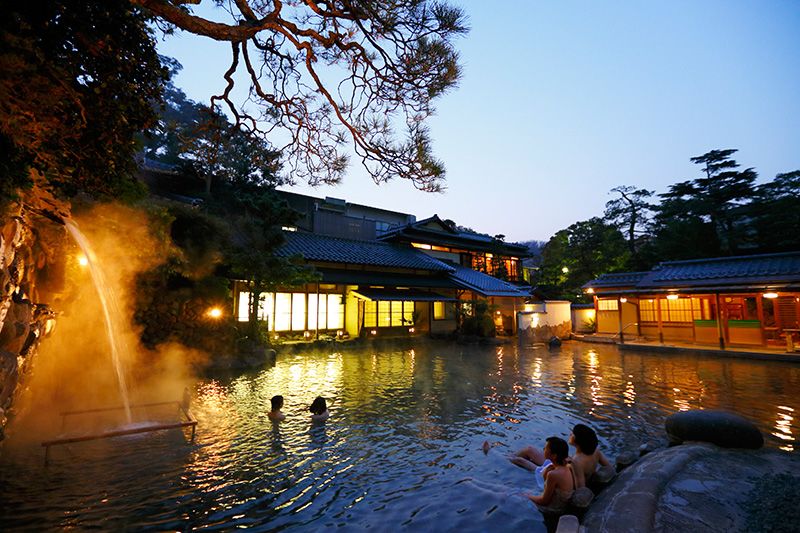 From long ago in Japan it has been thought that bathing cleanses both body and soul. Japan’s indigenous religion Shinto centers on misogi, or ritual ablution (purification with water). When important ceremonies were held at the imperial court, nobles would customarily wake up early in the morning and purify their body and soul by bathing before going out. This came down to the common people as the custom of gyōsui (taking a bath in an outside washtub). For Japanese people, making oneself clean on the inside, or cleansing of the soul, is included in the action of refreshing the physical body while washing away sweat and dirt.

Around the middle of the eighth century, the Unjitsu sutra came to Japan from the mainland together with a large number of Buddhist texts. This sutra teaches the virtues of bathing. Originally, purification rituals involved cleansing one’s body and soul by bathing in the sea, or in a cold river or waterfall, but in comparison to that, bathing in hot water or onsen feels better physically as well. It is not hard to understand then why the sutra explaining the virtues of bathing in hot water, which include the curing of seven ailments and the bestowment of seven blessings, was wholeheartedly approved of and welcomed.

It seems to me that this nation of people who love bathing, hot springs, and cleanliness, was created as a result of the marriage of the Shinto belief of misogi and the Buddhist Unjitsu sutra. This is how Japan’s “soaking culture”, which includes cleansing down to one’s soul rather than simply washing away surface dirt, was born.

The phrase isshūkan hitomeguri (one-week visit) is often used in discussing therapeutic bathing in hot springs to treat medical conditions and promote health. This phrase refers to the basic unit and time-frame for hot spring therapy, which was established some 400–500 years ago.

Most people will experience this effect if they immerse themself in healing waters over the course of one week. People in past times knew this from experience or word of mouth, not scientific study. In 1604, just after the installment of the Edo shogunate, the shōgun Tokugawa Ieyasu himself went to Atami Onsen in Shizuoka Prefecture for a week of hot spring therapy. Of course, that was not anything unusual.

Medical doctors officially started to use hot springs for therapy in the Edo period (1603–1868). The originator of such treatments was Gotō Konzan (1659–1733), a master of traditional medicine who fostered 200 apprentices. It is said that Konzan, sensing at that time a crisis in Chinese medicine, for which it was difficult to verify the effects, and seeking among other things to confirm the efficacy of available pharmaceuticals, took the lead in developing verifiable medicine in Japan and championed the medical reformation movement.

Konzan came out with the theory of ikki ryūtai (energy blockage), which surmises that humans become sick because of a block in the flow of energy within the body. The character for energy, 気 (ki), is the same as that used in the word 元気 (genki), which means healthy, and refers to autonomic nerves in modern-day medicine. Thinking it possible to cure an illness through the release of blocked energy, Konzan recommended soaking in springs with a temperature on the hotter side to increase one’s ki. This is the method for stimulating the sympathetic nervous system. Thus, to restore the balance of energy and feel more energetic, one should soak in very hot spring waters.

Moreover, he did not select the then-famous Arima Onsen (Hyogo Prefecture) as his top choice, but rather the secluded Kinosaki Onsen (Hyogo Prefecture). He chose it for the hotness of its spring waters. Located in a mountain recess, Kinosaki is not an easily accessible onsen region even today, but since receiving such high praise from the top physician of the time, Gotō Konzan, its fame grew instantly, and it remains one of Japan’s top onsen areas. 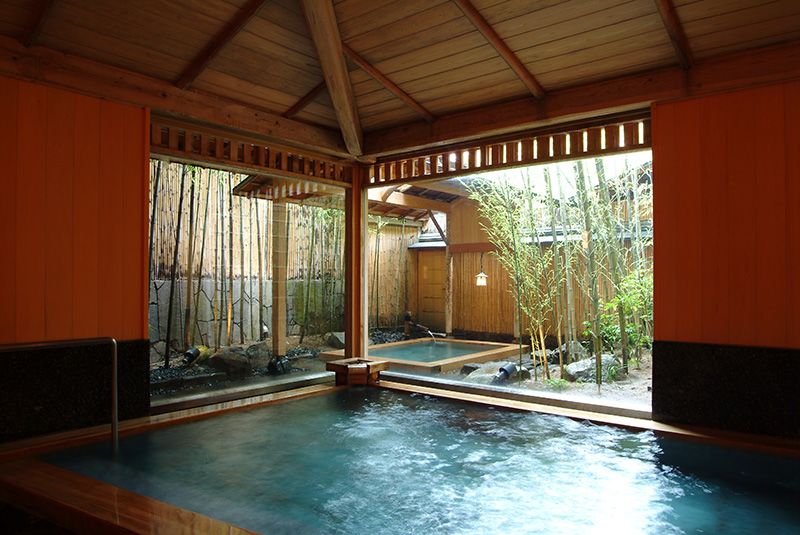 Kichinoyū (waters of good fortune) bath within the main building of Nishimuraya, one of the onsen inns representing present-day Kinosaki Onsen. (Photograph courtesy of Nishimuraya)

Recently, there is much interest in such foods as fruits, vegetables and mushrooms with antioxidant properties that eliminate free radicals, which are the source of senescence (ageing) and many lifestyle diseases, including cancer, high blood pressure (hypertension), arterial sclerosis, heart attack, stroke, diabetes, and obesity.

It is said that 90 percent of diseases and ageing are caused by free radicals.  Sources of free radicals include intense ultraviolet rays, radiation, pesticides, car exhaust, food additives, cigarettes, pharmaceuticals, and intense stress. Free radicals “oxidize” a substance; in other words, they cause it to corrode. Oxidization is also the reason that metal rusts and fish goes rancid. The human body is made up of some 60 trillion cells, and as a cell membrane corrodes, before long it gets to the point that the DNA inside is damaged and becomes cancerous.

On the other hand, the opposite of oxidation is “restoration.” It is the reverse action of oxidation; that is to say, not only does it prevent ageing and corrosion, or decay, in the case of humans it takes the corroded cell and activates it, with the effect of, for example, rejuvenating the skin. In both Japan and Europe, hot springs have from ancient times been called “the waters of youth” precisely because they offer this kind of “restorative power.” In other words, just as it is written in Izumo no Kuni Fudoki, when you soak in hot springs it restores the clarity of your corroded skin and can turn back the clock, bringing back your youthful appearance. 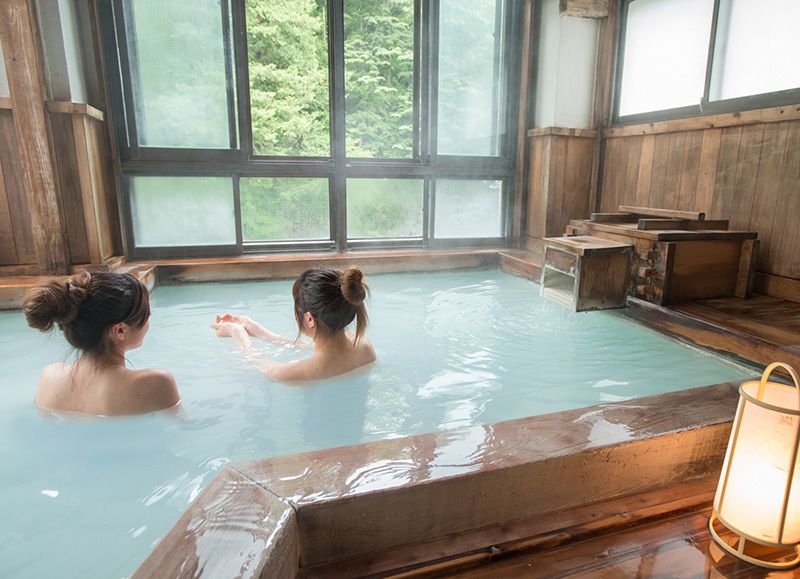 In addition to the restorative powers of hot springs, those providing esthetic benefits are also very popular among young women. (Photograph courtesy of Shimofujiya)

Hot springs that have not yet breached the ground surface have this special oxidation-reduction system, and the scientific substance and value of hot springs can be said to be in their reductive function. The reductive function is the ability to restore and activate our cells, which are oxidized by free radicals and run the risk of turning into a serious disease if the corrosion is left unchecked. Hot springs also have an “antioxidant effect,” preventing oxidation.

If time passes after the hot spring breaches the surface and a chlorine agent is mixed in as a disinfectant, a chemical change happens instantly and it becomes an oxidation system. Once oxidation occurs, the reductive function and the anti-oxidation effect naturally stop working.

More than 90,000 kilometers of blood vessels, equivalent to two and a half times the circumference of earth, spread through our bodies. In a healthy person, the blood that flows through these vessels is slightly alkaline. The urine that we expel is also slightly alkaline. Fruits and vegetables have antioxidant properties, but people nowadays are consuming less year by year. On the other hand, consumption of processed foods and animal protein from such sources as meat and dairy products continues, and the majority are oxidized products.

Onsen keep Japanese people sound in mind and body; the power they have to rejuvenate the oxidized cells within our bodies also cures disease. If hot springs were to be sought for a role not currently being filled by modern medicine, which is centered exclusively on symptomatic treatment with pharmaceuticals, and especially as preventative medicine, restorative hot spring waters fresh from the earth that eliminate and control free radicals could certainly meet that need. 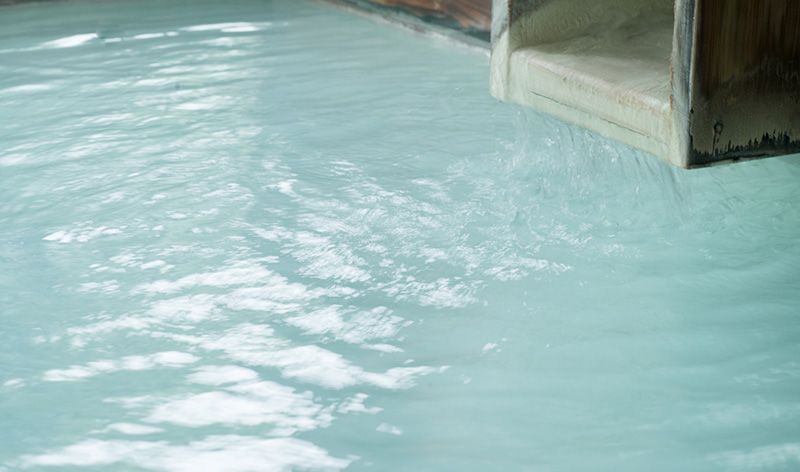 Fresh water spouting up from the hot spring source flows into a bathing pool. (Photograph courtesy of Shimofujiya)

Among these, the water that flows directly from the hot spring source has the most effective healing powers. By this I mean hot spring water that comes up from underground and is not diluted or heated externally. The fresh flowing water that spills over the sides of the bathing pool is called gensen kakinagashi (water flowing from the source), and it is this kind of hot spring with a constant flow of active healing water that I recommend as a real onsen. (See Professor Onsen’s Top Hot Springs)

This restorative power is the essence of the unspoken allure of onsen which has not changed since the writing of the Izumo no Kuni Fudoki in the Nara period some 1,300 years ago, or in the Edo period 400 years ago when Tokugawa Ieyasu and Gotō Konzan lived, or the twenty-first century, nor will it change as long as the earth remains. 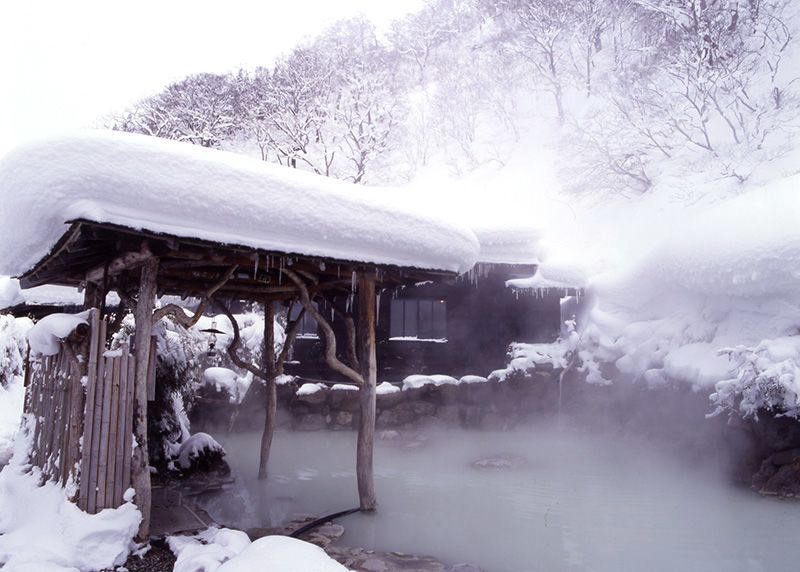 Tsurunoyu Onsen representing Nyūto Onsen-kyō in Akita Prefecture. A secret pool where one can experience the atmosphere of a wonderful ancient healing place. (Photograph courtesy of Tsurunoyu Onsen)