Culture May 1, 2018
The Jōmon Sugi on Yakushima is Japan’s best-known giant of the forest. Around the country, however, there are numerous famous old-growth trees of varying species that present their own unique characteristics. In this installment of the series we look at three trees garbed in the lush, verdant foliage of early summer.

The Allure of Giants

Japan boasts an abundance of old-growth trees of a variety of species. The designation of the Shirakami Mountains in Aomori and Akita Prefectures and the island of Yakushima in Kagoshima Prefecture as World Heritage Sites in 1993 has served to draw attention to these limbed titans. The best known giant of the forest is undoubtedly Yakushima’s ancient Jōmon Sugi, a towering Japanese cedar estimated to be between 2,000 and 7,200 years old. While revered as the country’s oldest tree, it is far from the largest and barely makes it into the top 20 for old growth in terms of girth.

Specimens of kusunoki or camphor have grown into some of Japan’s most immense trees. King among these is the Kamō no Ōkusu in Kagoshima Prefecture, which at its trunk measures more than 24 meters in circumference. Standing beneath the outstretched limbs and rich foliage of this goliath is truly awe inspiring

In Japan trunk size generally determines whether a tree is designated as a large kyoboku (巨木) or a giant kyoju (巨樹) , determination for the former being 3–5 meters around and the latter over 5 meters. Age and height are not factors in designation, and even 1,000-year old forest sentries will fail to make the noble rank of kyoju without presenting an appropriately robust bole.

Along with the broad variety of species, another characteristic of Japan’s old-growth trees is their solitude. They generally do not grow in extensive stands, such as the Giant Sequoias on the west coast of the United States, but in small clusters or as single plants. This is in part the result of careful cultivation of specific specimens over centuries. For this reason it is not unusual for older sites such as shrines and temples to have a number of kyoju of different species, including keyaki (zelkova), ichō (ginkgo), and matsu (pine). Another contributing factor is Japan’s temperate climate, which is suitable to a wide range of trees.

Ancient trees are the largest and longest-living organisms on the planet. The life span of humans is a mere fraction of these sedentary giants whose imposing forms have for ages inspired reverence. As such, we must still remember that even after standing for a millennium, a tree may quickly succumb when faced with rapid environmental change. This makes the existence of kyoju all the more valuable. 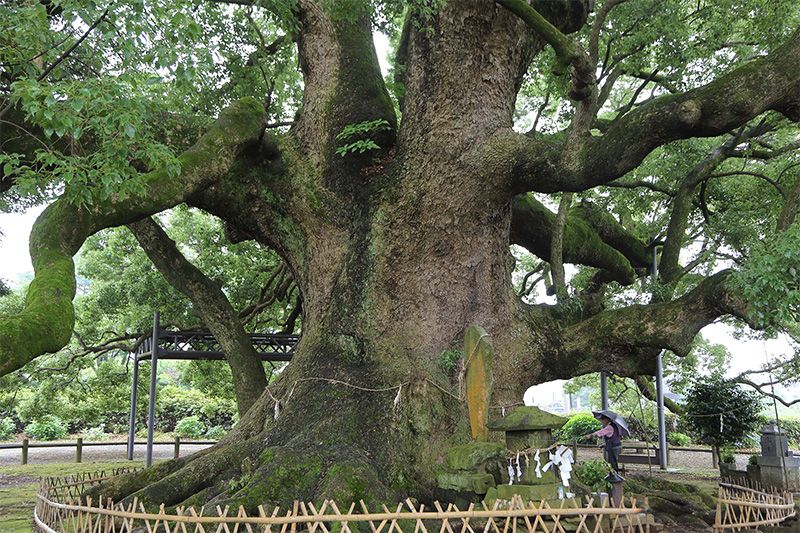 Among forest-rich Kyūshū, Kumamoto Prefecture stands out for its wealth of venerable trees. Topping this list is Jakushinsan no kusu, an ancient camphor that presents an aesthetically pleasing balance above and beyond all others. A typhoon in 1991 broke numerous branches and caused other damage, however, the tree has made a vigorous recovery. In an astounding display of vitality, most of its wounds have healed and its foliage continues to thicken.

One of the most awe-inspiring aspects of the tree is its massive crown that dwarfs anyone standing beneath it.

The tree derives its name from Kanokogi Chikakazu, a member of a powerful regional family who is credited with founding Kumamoto Castle. Upon his death Kanokogi was given the posthumous name Jakushin and buried at the base of the tree. Over the centuries the roots of the camphor have gradually come to embrace the bottom portion of the gravestone.

In 1989 the farmland surrounding the tree was turned into a park and visitors today can enjoy the majestic Jakushin no kusu amid fields of grass and blooming cosmos. This and other conservation efforts demonstrate the degree to which the tree is a source of pride for local residents. Standing below its foliage and sensing its soothing life force, it is easy to envision it is as the heart and soul of the area. 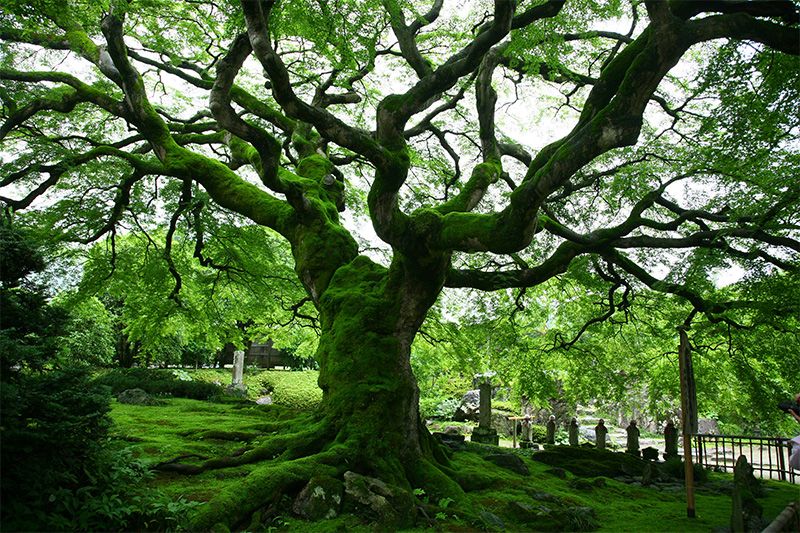 The historic temple Saizenji was founded in 1429 at the northern foot of Mount Bukō overlooking the Chichibu basin in Saitama Prefecture. It is the eighth stop on a pilgrimage of 34 temples in the region dedicated to Kannon, the Bodhisattva of Compassion. While it attracts a steady stream of worshipers, it is more broadly famed as the site of an ancient kominekaede or snakebark maple.

The tree stands just inside the temple gate, filling the yard of the hondō, or main hall, with its outstretched branches and broad crown of leaves. The impressive sight may trick visitors into forgetting they are gazing at a Japanese maple, a variety more renowned for its foliage than stature. The temple appears to have been built with the tree in mind. The main entrance of the hondō faces toward the maple and provides views of its changing seasonal splendor.

In autumn worshipers flock to admire the red and orange hues of its foliage, but the kominekaede presents an equally satisfying scene in the early summer when the showers of the rainy season dye its moss-covered trunk a dark green. This velvet covering extends around the base of the tree, creating a mysterious verdant atmosphere.

In November when the tree comes into its full autumn splendor it presents spectators with a spectacular gradation of foliage ranging from red to yellow. No matter the season, though, the Saizenji maple is renowned for its ability to provide countless hours of enjoyment. 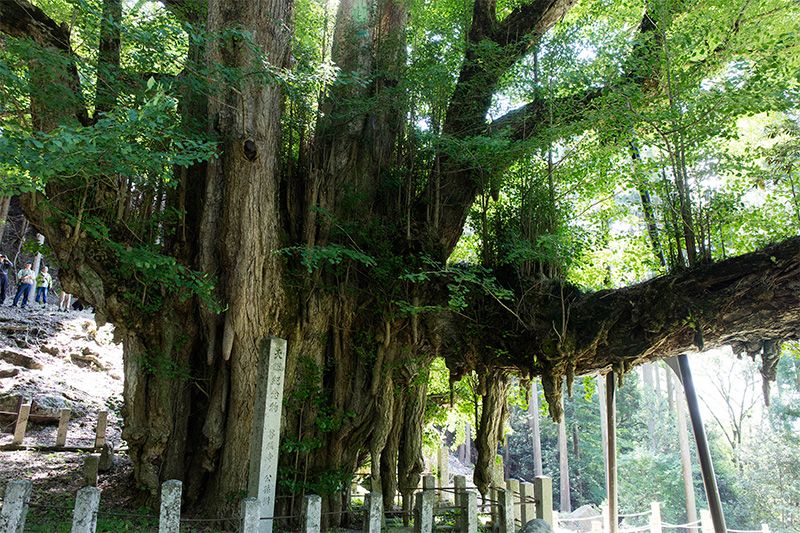 The temple of Bodaiji in the mountains of Okayama Prefecture at one time lacked a head priest and had become dilapidated and overgrown. Recently, however, parishioners and others have worked to restore the confines, even providing it with a parking area.

As visitors enter the ground, at the back to the right stands an impressive ginkgo tree that is thought to be the largest in Japan’s Chūgoku region. Legend has it that the aged ichō sprouted from a staff Hōnen, the founder of the Japanese branch of Pure Land Buddhism, placed in the ground when he was studying at the temple as a boy. Whether this was actually the case is a matter of personal belief, but certainly the most prominent feature of the tree is its many aerial roots that project staff-like toward the earth. These outgrowths are commonly referred to in Japanese as chichi or breasts. The smaller branches of the plant also grow upward in abundance like countless spindly wires. These combine with the chichi to nearly shroud the robust trunk and side branches, creating a vision that is well worth the journey to see. Admiring the tree, one is left with the impression that it has grown more vigorous with the passing ages.

Characteristic of older ichō, the upper portion of the tree is larger than the base, providing a sense of strength that exceeds simple numeric calculations of its trunk size. Without doubt, it is one of the grandest ginkgo specimens in western Japan.

(Originally published in Japanese on June 24, 2016. Photos and text by Takahashi Hiroshi.)