Culture Nov 17, 2017
Ichō (ginkgo) provide spectacular late autumn leaf viewing, putting on vivid displays of golden foliage. Japanese have long valued this unique, hardy species of tree, and impressive old-growth specimens are found across the country in such settings as Shintō shrines, public parks, and along roadways. Below we visit three ancient specimens decked out in their seasonal yellow splendor.

Ichō, or ginkgo, is an ancient species, the only extant member of a division of tree, Ginkgoales

, that flourished during the age of the dinosaurs. Around 1 million years ago, though, the population began to fall and the ichō only narrowly avoided extinction. Until a few hundred years ago it grew almost exclusively in northwest Asia, but global cultivation efforts have brought numbers to such a level that the ginkgo was removed from the endangered species list.

The ginkgo is a relative newcomer to Japan, having arrived from China around 1,000 years ago. It has thrived over the centuries to become a familiar aspect of Japanese life. Rows of trees provide welcome summer shade along streets and highways and robust specimens are frequently worshipped at Shintō shrines as shinboku, or divine trees. Even the seeds of the tree, ginnan (ginkgo nuts), are enjoyed as a seasonal treat.

Japan boasts an impressive number of ancient ichō. Come late autumn, these old-growth trees, or kyoju, put on a sensational seasonal display as their foliage transforms into spectacular crowns of gold. Below we visit three of these titans. 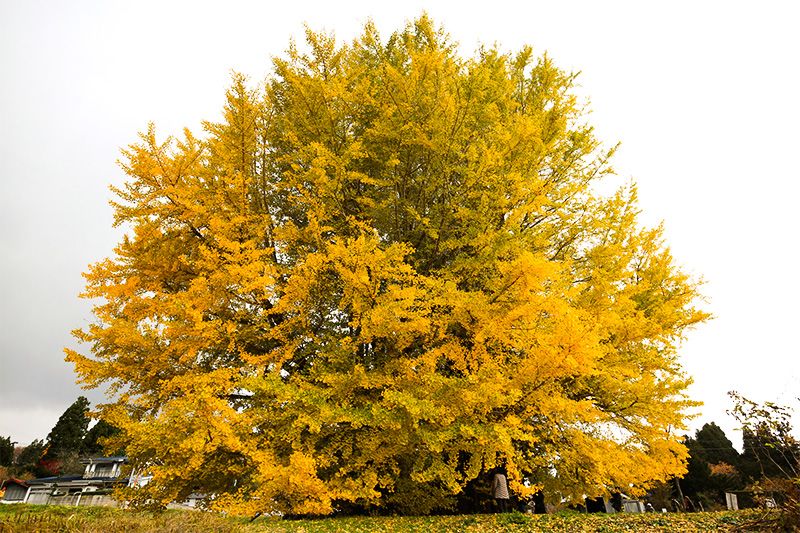 This massive ichō for much of its life escaped notice from even the most ardent fans of old-growth trees. Although it boasts an impressive form, few people beside local residents ever came to admire it, and for decades it was shrouded in obscurity.

In 2001, though, I discovered while conducting a survey for the Ministry of the Environment’s old-growth database that the plant’s trunk circumference was not 10 meters as listed, but actually over 13 meters around, putting it solidly in the top 10 for the species in Japan. The revelation drew attention of kyoju enthusiasts, and several years afterward the town of Hashikami, where the ginkgo grows, officially bestowed the tree the title of grand Kikubo ichō.

The tree has a pleasing shape with its abundant foliage reaching nearly to the ground. In 2011, though, a strong wind snapped off a large branch laden with downward-jutting aerial roots, changing the overall impression of the ichō. However, a fresh sprout has appeared in the damaged area, and with luck in a few centuries the plant will regain its earlier grandeur. 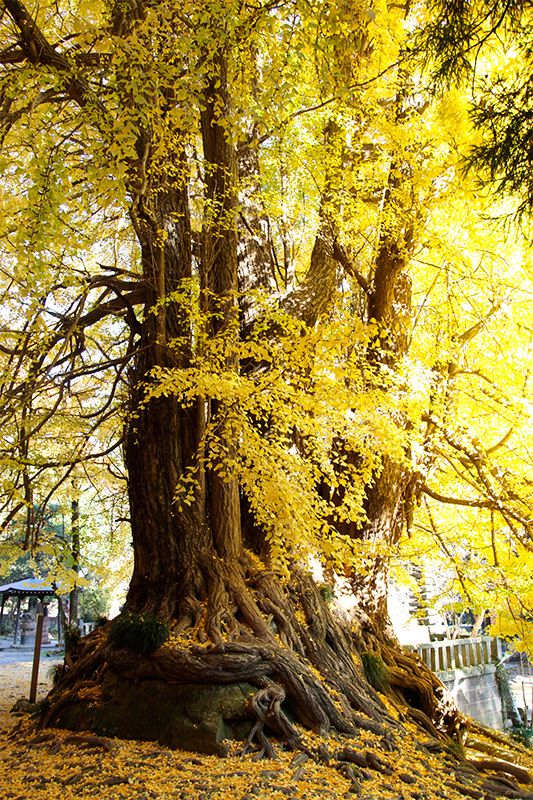 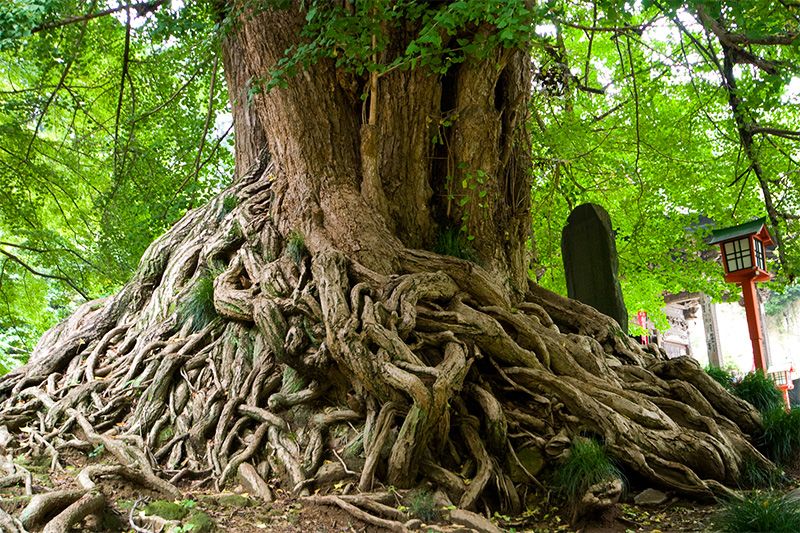 This aged ginkgo stands within the confines of the 1,300-year-old Buddhist temple Shōbōji in Saitama Prefecture. Located high on a hill, the tree looks out over the rolling mountains of the Chichibu region and the sprawling Kantō Plain that includes Tokyo.

The tree—actually several smaller trees grown together—sets at the back of the grounds next to a wooden hall dedicated to Kannon, the goddess of mercy. Fire has damaged the buildings of the temple several times over the centuries, but the ichō, helped by a resilience to flame shared by the species, has come through each conflagration unscathed.

The towering plant is perched unbelievably atop a large boulder. Over time its roots have formed an intricate bundle that cascade down the rockface and seemingly wriggle across the ground. From late November to early December, when the tree’s foliage is at its most impressive, yellow leaves cover the ground, transforming the surface into a startling amber carpet.

The best time to enjoy the tree‘s foliage is from late November to early December. During this period the ichō’s leaves turn a brilliant yellow and fall to the ground, transforming the surface into a startling amber carpet. 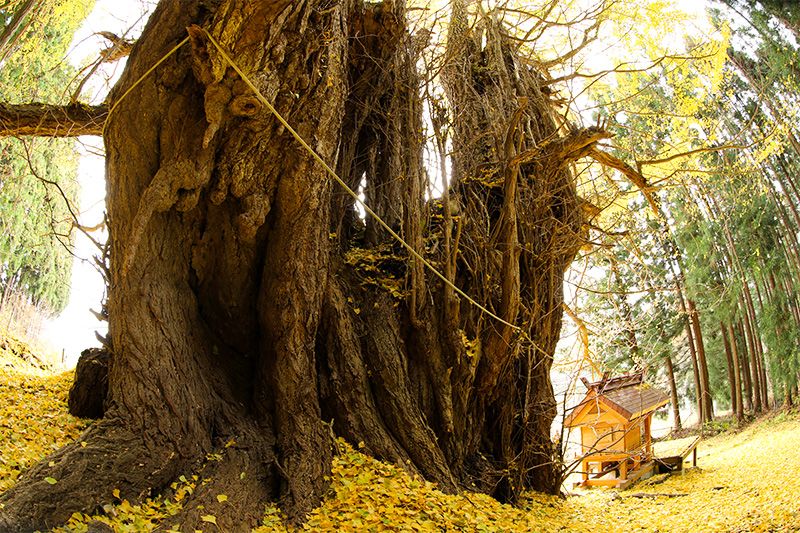 According to legend this grand ichō was planted sometime during the early Heian Period (794–1185) to commemorate the founding of the Buddhist temple Zenshōji on the site. Time has erased all remnants of the temple, though, and the tree now stands alone amid woods and fields.

The plant in 1926 became one of the first ginkgo designated as a national natural monument. It boasts a robust trunk, fourth among all ichō in circumference, and its six massive limbs are marked by an abundance of drooping aerial roots.

Although it grows in the cooler northern latitudes of the Tōhoku region, the ginkgo begins to display its autumn colors relatively late in the season, around mid-November. Due to this slow start the progress of its seasonal foliage varies from year to year. Sometimes the lower leaves drop off before the upper have even begun to turn yellow, or only foliage on the northern side will change colors. If there is an early snow, it is not uncommon for the tree to shed all its leaves while they are still green. As a result, the ginkgo is infamous among kyoju aficionados as being Japan’s most difficult to predict ichō. For the lucky visitor who catches the tree in its prime autumn form, though, the contrast of the golden foliage with the green of the surrounding Japanese cedars is spectacularly beautiful.

In August 2016 the tree suffered damage during a typhoon, but luckily the injuries were not severe enough to threaten its natural monument status. However, the loss of limbs and center bole harmed its overall form, and in November of the same year a tree surgeon carried out repairs. Although it will be some time before the ichō recovers completely, its autumn display remains awe inspiring.

(Originally published in Japanese on November 19, 2016. Photos and text by Takahashi Hiroshi.)