Culture Mar 28, 2017
Roughly 80% of cherry trees in Japan are somei-yoshino, a relatively recent breed. There are numerous, much older sakura, though, that over centuries have grown into giants renowned for their spectacular displays of blossoms. These venerable plants are truly awe-inspiring when in full bloom.

Japanese from early times used seasonal signals—like the blooming of flowers and arrival of migratory birds—to determine the proper timing for planting crops. Among these indicators, sakura were deemed to be particularly attuned to nature’s rhythms. Farmers saw the gradual opening of the buds as an indication of warming weather patterns, and once the trees came into full bloom they knew the time was approaching for planting rice.

Although no longer playing a role in setting the growing season, such “sowing” or “planting” cherries are still revered as embodying divine spirits. In fact, the practice of hanami, or cherry blossom viewing, is said to have grown out of farmers’ seasonal offerings of food and sake to tanokami, the god of the rice paddy, illustrating sakura’s deep agrarian connections.

Cherry trees have also traditionally been associated with memories of the deceased, and it is not uncommon to find aged specimens, possibly planted long ago as grave markers, blooming within cemeteries. The numerous headstones that have come to crowd the base of many of these aged titans suggest a long-held desire of humans to spend eternity at rest beneath the watchful gaze of a cherry tree.

Below are introductions to several hoary specimens that epitomize the beauty of giant sakura in full bloom. 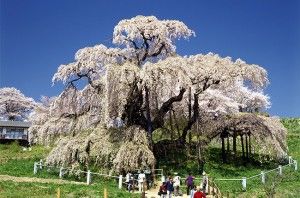 Come spring, the small town of Miharu in central Fukushima Prefecture puts on a spectacular flowering display as plum, peach, and cherry blossoms burst into bloom all at once—the town’s name, which means “three springs,” is said to derive from this trio of blossoms. Standing out amid this flurry of flowers is the millennium-old Takizakura, which together with the Usuzumizakura in Gifu Prefecture and Jindaizakura in Yamanashi Prefecture make up the “three great cherry trees” of Japan. 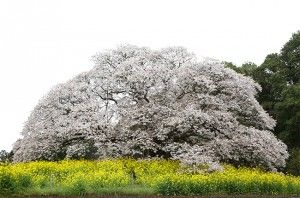 Leading the list of Japan’s biggest cherry trees is the edohigan variety, a hardy, long-living breed that is famed for blossoming around the vernal equinox. True aficionados of ancient sakura, though, will certainly rank the Yoshitaka cherry, a specimen of the yamazakura (mountain cherry) variety, among the aged kings of spring. 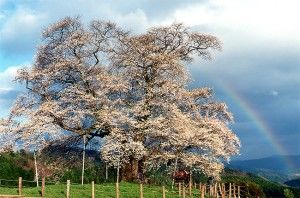 The rugged landscape of Bessho in Okayama Prefecture is dotted with purple patches of wild katakuri, or Asian fawn-lily, and is home to the scenic Shiodaki falls. It also boasts an abundance of cherry trees, the most famous being the Daigozakura. This ancient sakura of the edohigan variety sits like a lone sentry atop a knoll overlooking the surrounding lush countryside and the distant rolling hills of the Chūgoku region.

(Originally published in Japanese on March 21, 2017. Photos and text by Takahashi Hiroshi.)