Culture Mar 30, 2017
The Daigozakura stands sentry atop a hill in northwestern Okayama Prefecture. An edohigan tree, the strain famed as the largest of all the sakura, this specimen is revered by local residents, who maintain its hill in a state of natural splendor to showcase the giant as it deserves. 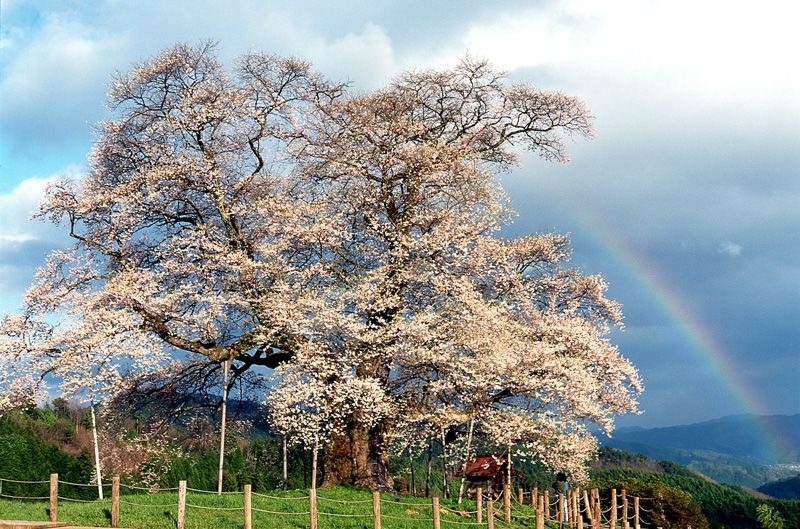 The rugged landscape of Bessho in Okayama Prefecture is dotted with purple patches of wild katakuri, or Asian fawn-lily, and is home to the scenic Shiodaki falls. It also boasts an abundance of cherry trees, the most famous being the Daigozakura. This ancient sakura of the edohigan variety sits like a lone sentry atop a knoll overlooking the surrounding lush countryside and the distant rolling hills of the Chūgoku region.

The ancient tree lies partially obstructed from view from the long, winding main road, only revealing its magnificent form in full to visitors who trek up the steep trail to its base. The Daigozakura is thought to have inhabited its soaring post for seven centuries, although many locals insist the “great cherry” has been there for a millennium. Residents consider it a tutelary deity of the community, and out of respect for its status have opted to keep the hill where the tree stands in as natural state as possible.

The most famous admirer of the cherry tree, and the person from whom it takes its name, is said to be Emperor Go-Daigo, who according to legend stopped to admire the blossoms on his way into exile on the island province of Oki following his attempt to overthrow the Kamakura shogunate in 1331. Regardless of the veracity of the story, the fame of the Daigozakura has spread far and wide, and now each viewing season droves of admirers from around the country gather to gaze at its celebrated flowers.

The tree generally begins to bloom around April 10. Local residents go to great lengths to accommodate the influx of visitors, including restricting the flow of traffic along the narrow road that runs below the tree and even setting up lights for nighttime viewing. When illuminated, the Daigozakura ushers viewers into a profoundly different realm of beauty and is a must-see for anyone who appreciates being enveloped in deep tranquility.