Language Culture Guide to Japan Jul 5, 2016
The Kanji Museum in Kyoto opened on June 29, 2016. The new facility includes many interactive exhibits and displays giving the history of the characters in China and Japan.

A new museum in Kyoto offers visitors the chance to learn about the history of kanji and test their knowledge of the characters with interactive exhibits. Located at the edge of the Gion district, the Japan Kanji Museum and Library is aimed principally at Japanese elementary and junior high school students and their families, but foreign students of all ages are welcome too. 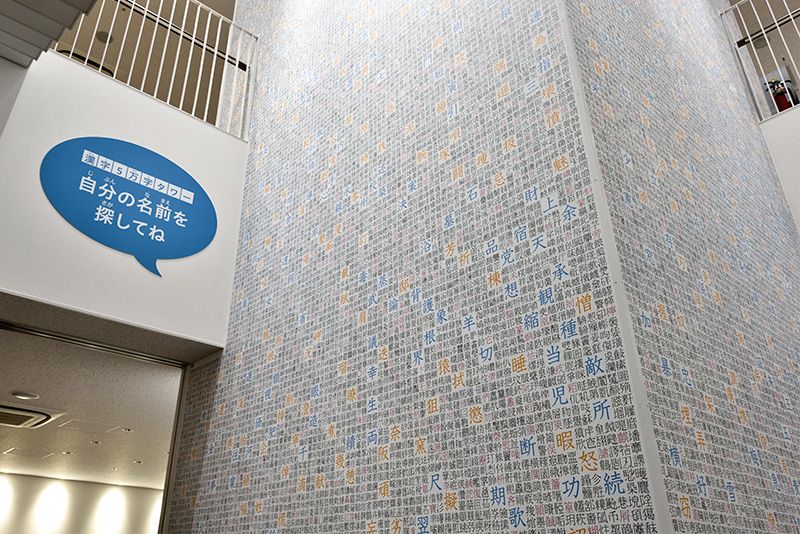 The centerpiece of the museum is the “50,000 kanji tower,” a 7.8-meter high pillar on which all the kanji in Morohashi Tetsuji’s comprehensive Dai Kan-Wa jiten dictionary appear. They are printed in different colors and different sizes, depending on how common they are. The most prominent are those learned by Japanese students during their years in elementary through high school. The tower provides perspective to those who quail at the volume of characters they have to study and should make them grateful that they are not required to memorize tens of thousands.

The first floor has a display running around one wall with the history of kanji. It starts with their origins in China, where some of the oldest extant characters were written on turtle shells as part of a divination ritual, before switching to their development in Japan, where they arrived beginning in the fifth century. One panel shows a transcription from eighth-century China by a 12-year-old student of the Analects by Confucius, as well as a poem he quietly composed on the back of the paper imploring the teacher to let the class go home early. 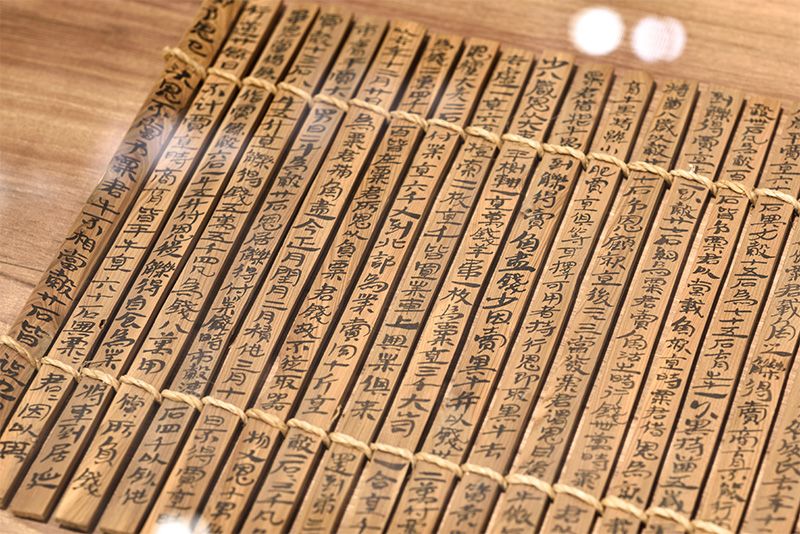 Recreations of wooden slats with Chinese characters from around 2,000 years ago. 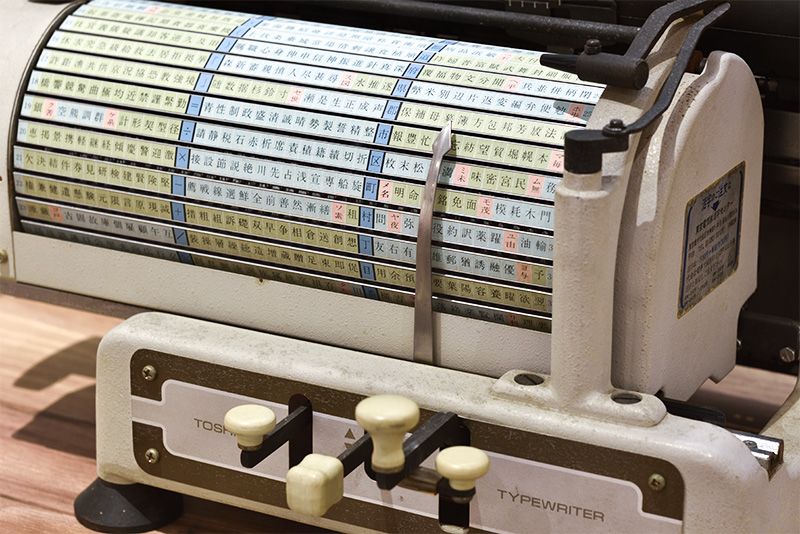 A Japanese typewriter, produced by Toshiba in 1981. It can be used to type some 2,600 characters, with 1,400 installed and an additional 1,200 stored in boxes until needed.

There are also items and replicas representing how kanji have been written through the ages. Before the turtle shells, the first characters are thought to have been marked out in sand and earth in China. Visitors can try their hand at writing in sand with the sticks provided—unless an installation is obviously out of reach, the museum has a basic “do touch” policy. Another highlight here is the kanji typewriter with hundreds of characters to choose from, arranged in order of pronunciation.

Much of the second floor is devoted to variously themed electronic games. Sushi lovers can see whether they know how to read the names of their favorite fish and take a commemorative picture standing in a giant kanji-festooned cup. Other games test knowledge of yoji jukugo (four-character phrases) and various readings for a single character. Onscreen hints lower the bar a little on some of the tougher games. There are also displays introducing such topics as kokuji characters—those created in Japan rather than imported from China—and regional kanji. 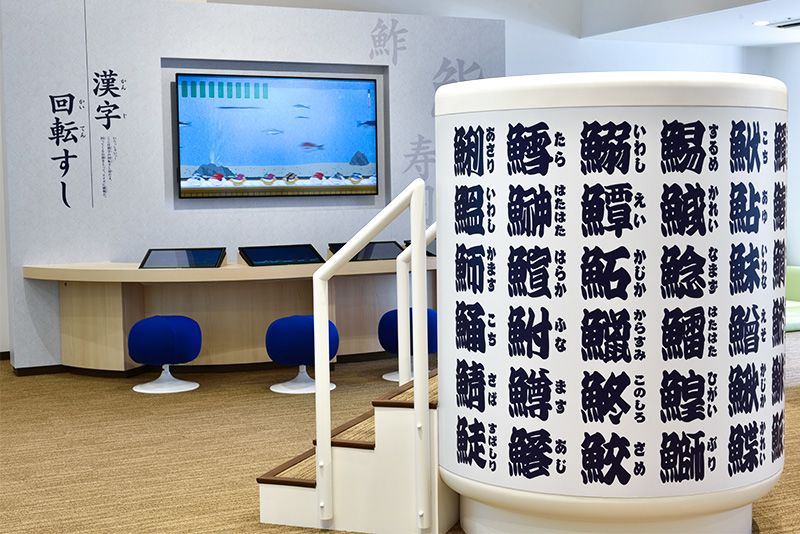 Test your sushi kanji skills or take a souvenir photo standing in the giant fish-names cup. 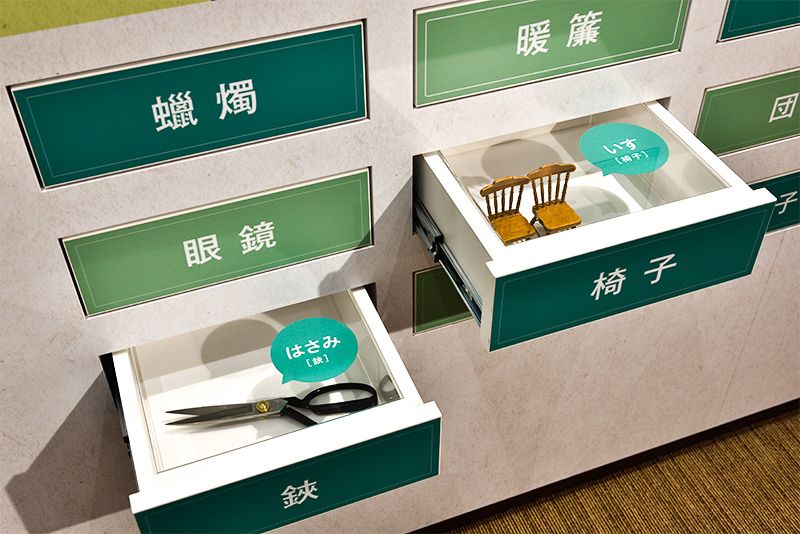 Visitors can try to read the kanji for common household items before opening the drawers to check if they are correct.

Growing Interest in Kanji Around the World

The museum is run by the Japan Kanji Aptitude Testing Foundation, which administers the Kanji Kentei test and sponsors the annual Kanji of the Year vote. Applicants do not give their nationality, so there are no official statistics, but there seem to be more non-Japanese people sitting the test in recent years. Kani Tatsushi, the vice director of the museum, said that he very much appreciated interest from outside the region in East Asian culture and kanji.

Hayashida Toshiko of the JKATF has met several successful test-takers who grew up in places like the United States and Britain, where the characters are not part of the standard school curriculum. She says that these learners have found a two-stage process to be effective for memorization. First they learn the meaning of a character—to take a basic example, 犬 is “dog.” Once they have that fixed in their mind, they learn the various readings; for “dog” these would be inu or ken in words like banken (watchdog).

At present, the museum has Japanese signage only. It provides furigana pronunciation guides on its signs to help Japanese schoolchildren, its main target audience, but even so, such displays as the history of kanji require considerable knowledge of Japanese to understand. There are plans to introduce English, Chinese, and Korean explanations—perhaps via a smartphone app—by next summer. Potential foreign visitors should be aware that some Japanese ability is required to enjoy the museum. The more you know, the more you will get out of a visit.

The building used to be a school, but it closed down in 2011. The Kyoto city government decided to allow the foundation to convert it into a museum so it could continue to act as a center for education. The museum hopes to attract 50,000 visitors in the second half of 2016 and aims for 200,000 annual visitors by its third year of operation. Its location beside Yasaka Shrine in the busy tourist district of Gion will help to attract casual visitors. 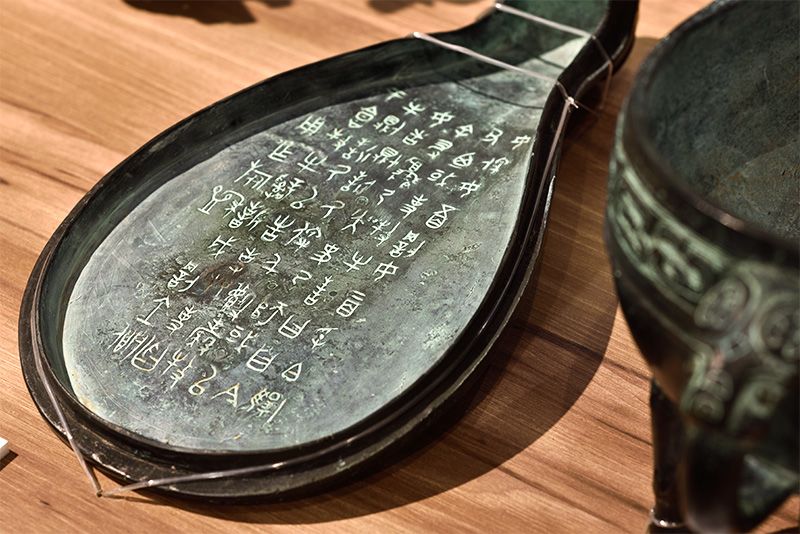 Chinese characters were often inscribed on bronze artefacts. These are around 2,800 years old.