Tochigi’s Strawberries: Red Jewels for the Crown of Japanese Agriculture

Culture May 15, 2017
Tochigi, north of Tokyo, is Japan’s top producer of strawberries. Visitors to the prefecture’s farms enjoy all-you-can-eat picking tours and come away raving about the sweet, juicy berries. Tochigi is also the source of the very finest specimens of the red fruit, shipped around the country for inclusion in exquisite desserts.

Berries Fit for an Emperor

Numao Hiroaki slips his fingers either side of the slender stalk, gives a gentle tug, and holds the deep red fruit up to the light. Flawless, heart-shaped, and almost as large as a hen’s egg, this is a perfect example of a Tochiotome strawberry. It would command a good price in a high-end department store—but Numao instead takes a bite and savors the fruit of his labors.

Now 41, Numao resigned from his job as a salaryman with an optical fiber manufacturer in 2003 to set up the Nikkō Strawberry Park in Tochigi Prefecture—famous as Japan’s “strawberry kingdom.” 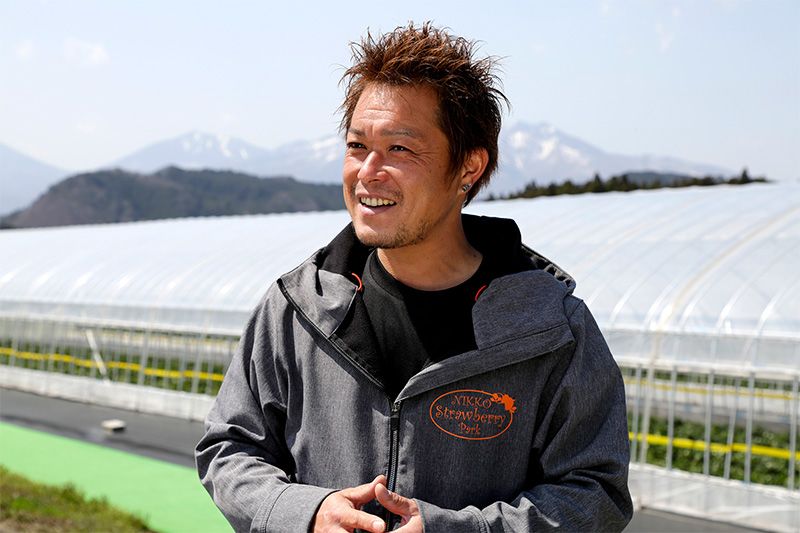 Numao Hiroaki talks in front of some of his greenhouses overlooked by Mount Nyohō.

“When I came here, all this was just paddy fields and there was no electricity or running water,” Numao said, indicating a swathe of land bordered by cypress trees and overlooked by the snow-capped Mounts Nantai and Nyohō.

Starting with just six greenhouses of plastic sheeting, he now has no fewer than 29, three of which were added this year. Numao’s strawberries have been given as gifts to the emperor and every year, more than 50,000 people visit the farm to tread warily along the carefully tended rows of plants and pick the juicy red fruit for themselves.

“Japanese strawberries are sweet, juicy, and tasty and they appeal to everyone who tries them,” Numao told Nippon.com. “Kids especially like coming here to pick the fruit. The best part of my job is having people tell me that the strawberries are delicious. When I hear that, I’m really happy.” 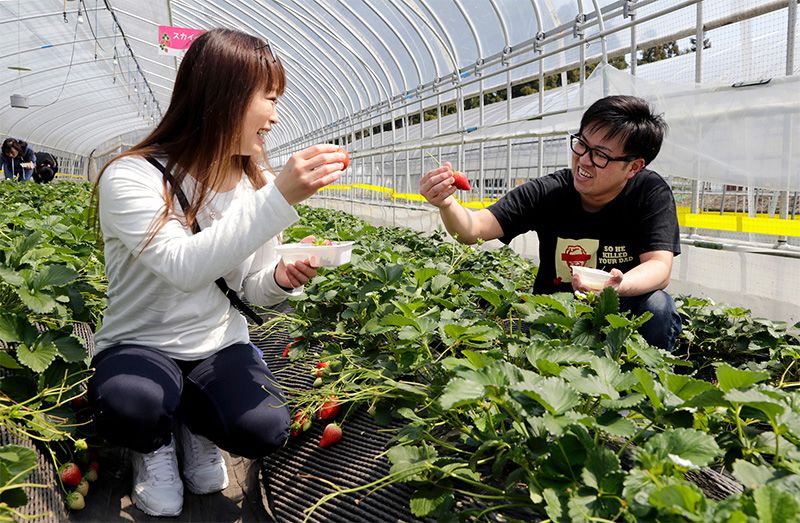 A couple from Ibaraki Prefecture sample the fruit at Nikko Strawberry Park. On a busy day, more than 1,000 people visit the farm.

Numao grows four varieties of strawberry—Tochiotome, Yayoihime, Benihoppe, and Skyberry—many of which were first created in Tochigi as part of the prefecture’s efforts to produce ever-tastier and more succulent strawberries. The Skyberry, for example, was only developed through a painstaking cross-breeding program in 2014, is registered as a brand, and is not grown anywhere outside the prefecture. 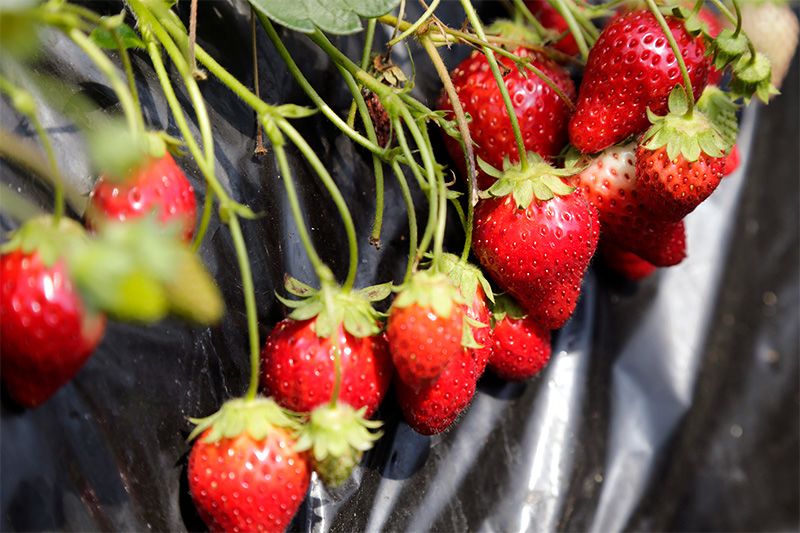 “Large-scale strawberry cultivation only began in Tochigi in the 1960s. In the beginning, the crops could only be harvested between February and April, while production was not stable,” says Ōhashi Takashi, a senior researcher with the Strawberry Research Laboratory Department of Agriculture, part of the prefecture’s Agricultural Experimentation Station.

“In 1985, Tochigi produced a new variety of strawberry, called Nyohō, which can be harvested from December,” he said. That enabled shops to make Christmas cakes with strawberries on top. Since sponge cakes with strawberries and whipped cream were so popular—as they still are—it boosted demand for the crop. “Since then, the industry has been constantly working to develop bigger and sweeter strawberries,” says Ōhashi, “leading to greater profits for farmers.” 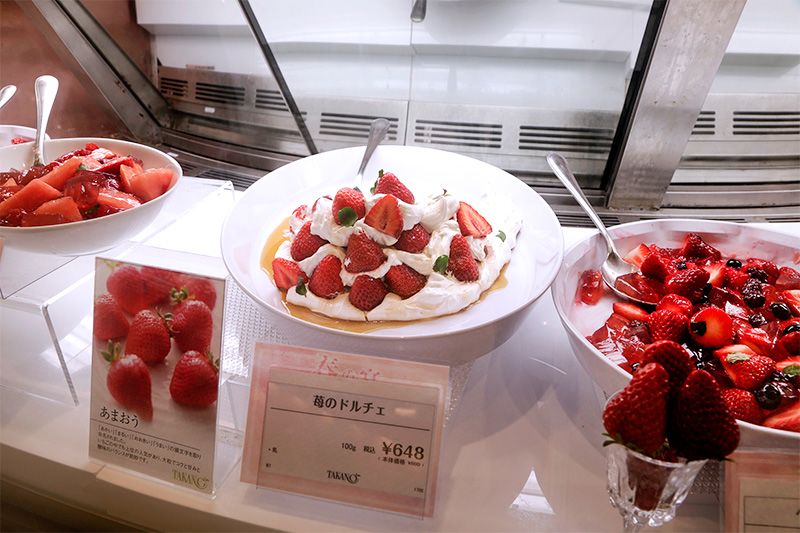 Japan’s love affair with strawberries can be traced back to strains bred in the Netherlands about 200 years ago. The first strawberries were brought into Japan through Nagasaki, the only port that was permitted to trade with the outside world during Japan’s years of self-imposed isolation during the Edo period (1603–1868).

Small-scale strawberry production began in Tochigi during the Taishō era (1912–26), but it was not until much later that the potential of the crop was identified and more land was turned over to the fruit.

“Tochigi has been the largest producer of strawberries in Japan for almost five decades,” points out Ōhashi. “This was because rice farmers in the past wanted to raise off-season crops, and this region was just perfect for them to do that.”

“Over more than two decades, starting with Nyohō strawberries, farmers increasingly cultivated the fruit as their main crop as new varieties enabled them to harvest virtually year round. Now, strawberries can really no longer be considered a seasonal crop,” he continues. “And it has had another positive spin-off, with strawberry farms becoming popular among tourists.”

The Tochiotome variety, which came to market in 1996, was effectively the successor to the Nyohō strain because it is both larger and had a higher sweetness percentage than previous varieties. Consumers also liked the deep red color and tenderness. Today, fully 90% of all the strawberries in Tochigi are Tochiotome—perhaps fitting for a name that means something like “daughter of Tochigi.”

Along with Tochiotome, there is another new breed vying for the hearts and taste buds of strawberry lovers. The Skyberry variety is the result of 17 years of research and has won acclaim for its flavor, juiciness, and combination of sweet and sour notes.

According to the Ministry of Agriculture, strawberry fields accounted for a total of 5,450 hectares of land across Japan in 2015, producing 158,700 tons of fruit. Tochigi was by far the largest producer, producing 24,800 tons of the total, ahead of Fukuoka Prefecture, with 16,000 tons.

A High-End Ingredient in Luxury Desserts

Strawberries from across Tochigi are shipped to destinations the length and breadth of Japan, with the very finest specimens—perfect in shape, luster, and size—ending up in presentation boxes in high-end department stores. Many others end up in exclusive cake shops or being served at Shinjuku Takano, the fruit shop that has been a landmark in Tokyo’s Shinjuku district since 1926.

“Japanese strawberries are among the best in the world, largely due to the tremendous amount of work that has gone into improving their quality,” said Kubo Naoko, marketing manager for Shinjuku Takano Co.

As the creator of thousands of recipes for cakes and other delicacies over more than 20 years, as well as authoring a number of books for Takano on topics like “fruit for breakfast” and recipes for fruit-based desserts, Kubo knows how to get the very most from strawberries.

“How to craft the perfect strawberry cake or parfait depends on the variety of strawberry, where it has been harvested, its firmness, sweetness, and sourness, and its color, both inside and outside,” she says.

Served in a tall glass, the Takano strawberry parfait is a firm favorite with customers and is the featured fruit dish in the shop’s seasonal menu for fully four months of the year. Created with layers of ice cream, whipped cream, cut Sakuramomo strawberries, and strawberry jelly and topped with a sprig of mint, the parfait is a feast for the eyes as well as the stomach. 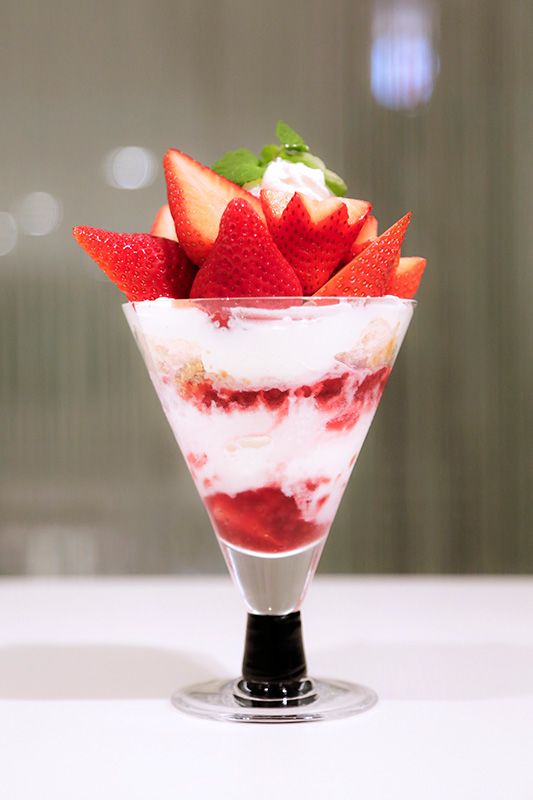 “Strawberries also match Japan’s so-called kawaii culture, as they are used as motifs in illustrations, manga and animation characters,” she continues. “And they’re crucial to the unique Christmas cake that we have in Japan, of sponge with cream and strawberries.”

Thanks to a combination of science and nature, perfect strawberries are available from Tochigi throughout the year.